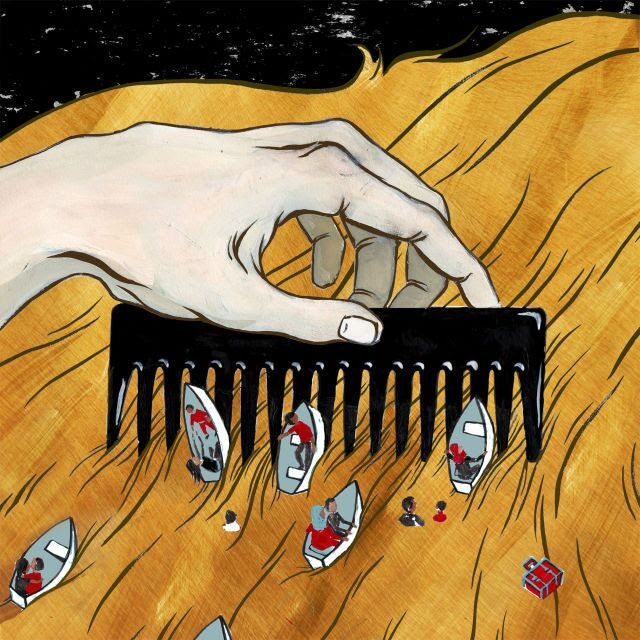 When I met Melissa Fleming, chief spokesperson of the UN High Commissioner for Refugees, almost three years ago, neither of us privileged Americans thought our own president would enact an all-out ban on Syrian refugees. Yet just a little over a week into his presidency, Trump has issued an executive order on immigration that has ignited not only deep societal, existential rifts, but an all-out political and legal crisis. The order has suspended all refugee admissions for 120 days and blocked citizens of seven Muslim-majority countries, refugees or otherwise, from entering the United States for 90 days: Iran, Iraq, Libya, Somalia, Sudan, Syria, and Yemen.

I’ve been reporting on the Syrian-refugee crisis for the past five years. While I knew how difficult it was for a Syrian to get asylum in the United States, I had clung to a certain American exceptionalism. In the midst of the worst humanitarian refugee crisis of modern history, I wanted to believe that my country would take in the wretched refuse of the teeming shore. “You have to understand,” Somali-British Warsan Shire in her poem “Home” wrote: “No one puts their children in a boat/unless the water is safer than the land.”

Over the past three years, I’ve looked to Melissa as a mentor and friend, often discussing how we can best humanize the millions who have been relegated to mere numbing numbers. As the chief spokesman for the UNHCR — the UN agency that handles refugees — Melissa does everything from helping to coordinate Angelina Jolie’s visits to refugee camps to reminding high-level delegations, educators, and others about the almost 60 million people who are currently displaced from their homes — the most since WWII.

Here’s another horrifying statistic: about one-sixth of those refugees are Syrians. Approximately 11 million have fled their homes since the outbreak of the civil war in March 2011. How do we remind people of our shared humanity? How do we get people to realize that their stories are really *our* stories?

> How do we remind people of our shared humanity? How do we get people to realize that their stories are really our stories?

In a week marked by darkness, Fleming’s new book *A Hope More Powerful Than the Sea* does just that. It tells the story of Doaa Al Zameel, a Syrian refugee whose journey to Europe reads like something from a dystopian Hollywood film.

On Monday I spoke with Melissa over Skype in the United States, where we both are currently visiting our families. What an incredible privilege. As Americans, we have the right to travel freely; to live in our adopted cities of Vienna and Istanbul; respectively; to go to Jordan, to go to Lebanon and Iraq and interview incredible human beings with hardly any paperwork involved. We spent the snowy Monday chatting about the current state of affairs (spoiler alert: we don’t have many answers for you), why there are no massive resettlement programs for the victims of the worst war of our time, and about Melissa’s own confrontation with mortality.

We got off our Skype conversation feeling depressed af, but ultimately hopeful. Here’s why.

**MF:** I’ve listened to so many horrific stories of people fleeing for their lives. But there’s one story that really kept me awake at night — and that’s Doaa’s story.

In 2011, Doaa was only fifteen years old. She was a shy girl, living in Daraa \, the birthplace of the Syrian revolution. She, like many youth, demonstrated against the regime. Things became too dangerous for her in Syria, so she fled to Egypt, where she tried to survive by stitching bags in a factory. Her life was difficult in Egypt, and like many, she dreamed of taking a boat to Europe. In Egypt, she fell in love with another Syrian refugee, named Bassem. They got engaged and decided to hop on a small boat together from Egypt, hoping to reach Europe.

Fast-forward to September 2014. Doaa is being rescued from the Mediterranean, accompanied by two small children who were basically put under her protection. She had been floating at sea for four days after her small smuggling boat to Europe sank. Five hundred other passengers were killed, including her beloved Bassem.

Doaa is now safe in Sweden, but there are so many more Doaas. Why is there no massive resettlement program for Syrians — the victims of the worst war of our times?

**LB:** What does this “Muslim ban” (which the Trump administration claims is not actually a Muslim ban) mean?

**MF:** Well, it means that Doaa wouldn’t be allowed in the country. They’re essentially banned. And you have the privilege of knowing just how wonderful people like Doaa are — harming someone is the farthest thing from their minds.

I’m on my book tour this week in the United States and I’m meeting people in Boston, in Philly, in NYC … everyone has tears in their eyes. They buy the book and say, what can we do? The power of the individual and their human story is really important. And it gives me hope.

But never did we think this ban would happen. The US has always been such a champion for refugees — both Democratic and Republican parties. There’s always been bipartisan support for UNHCR and the UNHCR resettlement program. It was a surprise to see such a turnaround … such a rejection of a powerful and honorable tradition. It was and is a part of our very fabric. This ban came as a surprise, and we’re all deeply worried. This doesn’t just affect Syrian refugees, of course. The ban effects those from Iraq, Somalia, etc. — countries where there has been and is still great hardship.

**LB:** As you’ve said, you’re no newbie to the outsize challenges refugees around the world face. What did you learn or find most surprising while writing this book?

**MF:** What the human spirit can endure and survive, especially where there is hope and love. In Doaa’s case, although she couldn’t imagine life after watching her fiancé drown, she knew she had to live for the sake of the two babies who had been entrusted to her. Corpses and drowning people surrounded her, many who were taking their own lives out of despair. She and had no water or food; the children were agitated and growing weaker by the hour; but she didn’t give up.

**LB:** In light of Trump’s executive order, what is one thing you want people to know?

**MF:** That refugees are fleeing the terror of war, oppression, persecution, and terrorism. All they want is a peaceful place to restart their lives and contribute to their new communities. The refugees resettled to the US undergo an intense vetting process that can take up to two years. The US has been a leader in refugee protection for decades, and the new citizens have enriched American society in so many ways.

**LB:** Almost every day — now almost every hour — I receive an email from a friend or reader asking “What can I do?” I have my go-to suggestions (sponsor a family through the Karam Foundation, make friends outside of your network). How do you answer?

**MF:** Meet a refugee and learn what they have gone through. Get involved in your community — there are so many local organizations that help refugees acclimate and find work and friends. Donate to UNHCR and other refugee agencies. Add your voice when policy turns against people who are fleeing war and are being rejected for reasons that run counter to your beliefs.

**LB:** Because I’m privileged to know you personally, I know how incredibly strong and resilient you are. How has telling Doaa’s story influenced your own?

**MF:** I always ask refugees what they find most difficult about being forced into exile, and they tell me loss of control. I have thought about that a lot. How suddenly not having control over your destiny is worse than losing your home.

In November, two months before the publication of this book and just after I was appointed to the transition team for the new UN secretary general, I was diagnosed with breast cancer. Suddenly, I also lost the reigns of my life, and my own mortality was no longer mine to control.

Doaa’s story, her positive spirit and her will to move beyond, gave me a lot of strength. I am now halfway through treatment. The prognosis is good. My perspective on my own life has deepened, like so many refugees — stripped of everything, most important are the people you love.

***
*Excerpted from A Hope More Powerful Than the Sea: One Refugee’s Incredible Story of Love, Loss, and Survival.*

A Note from Doaa:

In this book, I have shared my suffering with you. It is only a small glimpse of the hardship and pain that refugees around the world endure. I represent just one voice among the millions who risk their lives every day in order to live a life of dignity.

The perilous journey refugees take in order to reach safety in Europe often leads to despair and death. But we put our lives in the hands of cruel and merciless smugglers because we have no other choice. We have been confronted with the horrors of war and the indignity of losing our homes. Our only wish is to live in peace. We are not terrorists. We are human beings just like you. We have hearts that feel, yearn, love, and hurt.

Every family in my country has lost so much that they have had to rebuild their homes in their hearts. We have lost our homeland, and our dreams are all in the past. If only all the tragedies we have lived through were just a nightmare that we could wake up from.

The people responsible for the war in Syria don’t care about shedding the blood of a child, tearing apart families, or destroying homes. And the world doesn’t seem to mourn for all the people that have drowned in the sea during their search for sanctuary.

My fiancé, who was the love of my life, slipped out of my arms and drowned right in front of my eyes, and there was nothing I could do about it. Now, my life without him feels like a painting without any color. More than anything, I just wish he were still with me.

When I was afloat in the sea, I did my best to keep Masa and Malak alive. Over those four horrific days, they became a part of me. When I learned that precious Malak took her last breath after we were rescued, I felt like someone tore my heart out of my chest. But I do find comfort in knowing that she has made her way to heaven. A heaven where she has at least found safety, and there is no fighting or wars.

I am grateful to all of those who refuse to remain indifferent. I especially want to recognize our Egyptian friends who made my family feel welcome, the captain and crew of the *CPO Japan* who came to my rescue, the pilots who pulled us into their helicopter, the doctors on Crete who saved our lives, and my host family on Crete, who took me in and gave me the space to heal. I also want to give a special thanks to UNHCR for arranging our resettlement and to the government of Sweden for giving us a safe and promising new home.

One day, I hope to return to Syria so I can breathe again. Even if it’s just for one day. That would be enough.

*Copyright © 2017 by Melissa Fleming. Excerpted by permission of Flatiron Books, a division of Macmillan Publishers. No part of this excerpt may be reproduced or reprinted without permission in writing from the publisher.*