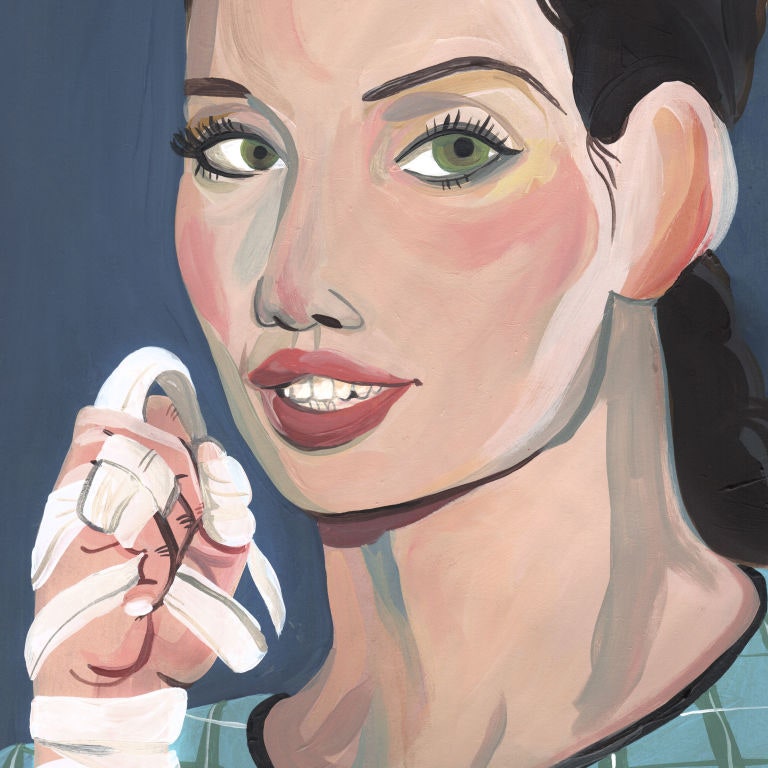 Looking back on my twenties, I regret a lot of what I put my body through, whether it was stripping the vitamins from my bones by starving myself, bathing my brain in cortisol from dating narcissists, blowing out my adrenal glands from workaholism, undersleeping, or drinking a shocking amount of blueberry-vanilla coffee from 7-Eleven. By the time I got into my late twenties, I decided that maybe it was time to get my shit together because, let’s face it, being crazy isn’t cute in your 30s.

I was sick of being a mess and sick of being, well, sick. I had been living with a partially healed broken shoulder, chronic migraines, weird abdominal pains, and a sharp stabbing foot pain; my monthly colds had evolved into a couple bouts of pneumonia. Not wanting to perpetuate the stereotype that women are “weak” and “dramatic,” I never thought to get any of these maladies treated. Also, doctors are expensive as hell, and I wasn’t going to waste my money on silly health insurance. Back then, the money I saved went to more important things, like self-tanner and hair extensions.

I finally scraped together some self-esteem when I was 31, thanks to intense therapy for codependence. I started going to tons of doctors — basically anyone who took my health insurance. I went to an allergist, an optometrist, a rheumatologist, and even a couple of wack-job “healers,” one of whom called himself Dr. Bob. If you glean nothing else from this essay, it’s this: Do not go to any doctor who goes by his or her first name only. Unless, of course, it’s Dr. Dre, because that would totally be worth the story.

After I saw all those docs and got a good shrink, I started to develop things like “boundaries” and “standards,” two concepts about which I was oblivious in my twenties. I had a harrowing epiphany: there’s such a thing as a doctor who is an asshole.

This may not be news to you, but for someone who hadn’t been to doctors very much, a crappy doctor felt like an oxymoron, given that they supposedly dedicate their lives to helping people. But every doctor I was going to was dismissive, mansplain-y, too busy, and, frankly, seemed kind of bored. For example, I told a doctor about some stomach issues I was having, and he nonchalantly mumbled, “It’s probably just cramps,” as if I were his naggy wife trying to get him to talk about my feelings. After I told him I wasn’t on my period, he said, “You probably have IBS.” Turns out I did not have IBS; he was just full of BS.

When I finally made the time to see a neurologist about my recurring and debilitating migraines, I asked the doctor if I should get an MRI on my brain, and she rolled her eyes at me. And it wasn’t even a subtle eye roll. It was one of those eye rolls that seem to reverberate all the way into someone’s neck and cause their head to tilt, to the point where I think she should have gotten an MRI too. Apparently, it wasn’t just male doctors who perceived my desire to heal as dramatic and annoying.

Just when I thought that was as poorly as a doctor could behave, I had an ER doc tell me to “Calm down” when my ear was hanging off my head after a dog bite (1)). After saying “Calm down” — a command I thought I’d only ever hear from boyfriends I was arguing with — the doctor followed it up with, “You’re not gonna die.” What’s worse is during this whole ordeal, he had the audacity to be wearing a coral-and-turquoise cuff bracelet, so in addition to dealing with a condescending tone and a dismissive hand gesture, I had the added confusion of having to process the complications of a doctor shopping at the same stores as Stevie Nicks.

Even if a doctor’s demeanor wasn’t overtly dismissive, their game plan for my health was. Three years ago, I realized that I was on four pills I didn’t need to be on, many of them not even for the ailment they were formulated for. Doctors had put me on an Alzheimer’s medication for migraines, a thyroid medication for low energy, birth control for depression, and antidepressants for sleep issues. Not to say that these pills aren’t miraculous for many people, but the combination triggered headaches and made me tired and dizzy. I felt like a grumpy science-lab guinea pig.

After I froze my eggs, I got sick of pumping my body full of hormones and chemicals, so I tried to go off the antidepressant. It didn’t occur to me to ask for a doctor’s help. To my surprise and chagrin, when I stopped taking the pill, I felt terrible. When the psychiatrist had given it to me, he hadn’t told me going off it would be tedious and uncomfortable and would entail six months of weird zapping sensations in my fingers and eye twitches that made first dates very awkward.

A painful withdrawal from a pill I didn’t even need to be on was my rock bottom in terms of allowing doctors to treat me like a number. I was sick of losing my quality of life to people who promised to improve the quality of my health. When I finally had the courage to confront one doctor about the plethora of pills I had been given, he said, “The medical field is doing the best we can with the information we have.” Well, I guess that’s why it’s called a “practice” and not “the championships.”

After being ignored, overdiagnosed, and misdiagnosed, I’m finally ready to start being as picky with doctors as I am with the guys from Tinder I swipe right on. I started speed-dating doctors, desperate to find ones who didn’t cut corners, dismiss me, throw drugs at me, or make me wait an hour reading an Us Weekly from 2015. It was news to me that that I don’t have to settle for a doctor who isn’t present, respectful, punctual, and available by text. If I have to call and leave a message, you’re already causing me the kind of anxiety that a doctor is supposed to mitigate. Yes, in America, it’s sadly a privilege to even be able to carve out the time and have the money to go to doctors, but that doesn’t mean anyone’s pain should be ignored.

Today, I regularly challenge doctors to give me an alternative solution to quick-fix pills, and if my gut is telling me my issues have been minimized, I’ll refuse to settle and get a second opinion (but not from WebMD, because every time I go on that site, I quickly come to the conclusion that I have leprosy).

A couple of months ago, I left my gyno of ten years because she was consistently an hour late and I could no longer justify paying someone to disrespect my time. I was auditioning a new gyno, and within minutes she’d told me that that the birth-control pill I was on was very dangerous for me, given the fact that I’m prone to neurological migraines. She pulled up some recent trials linking that kind of pill to strokes. She bluntly stated, “The risk is unacceptable.” I replied with, “Well, I’m going to Italy for a vacation with my boyfriend in two weeks, so can I just keep taking it for another month, then I’ll switch?” She looked at me and again stated, this time more slowly, “The risk is unacceptable.” I begged and pleaded, but she refused to prescribe me the pill. Yes, she sounds borderline annoying, but I’m finally at the point where I’d rather my doctor be a pill than mindlessly give me one.

*Whitney Cummings is a stand-up comedian whose new book, * (2)*, is now available.*