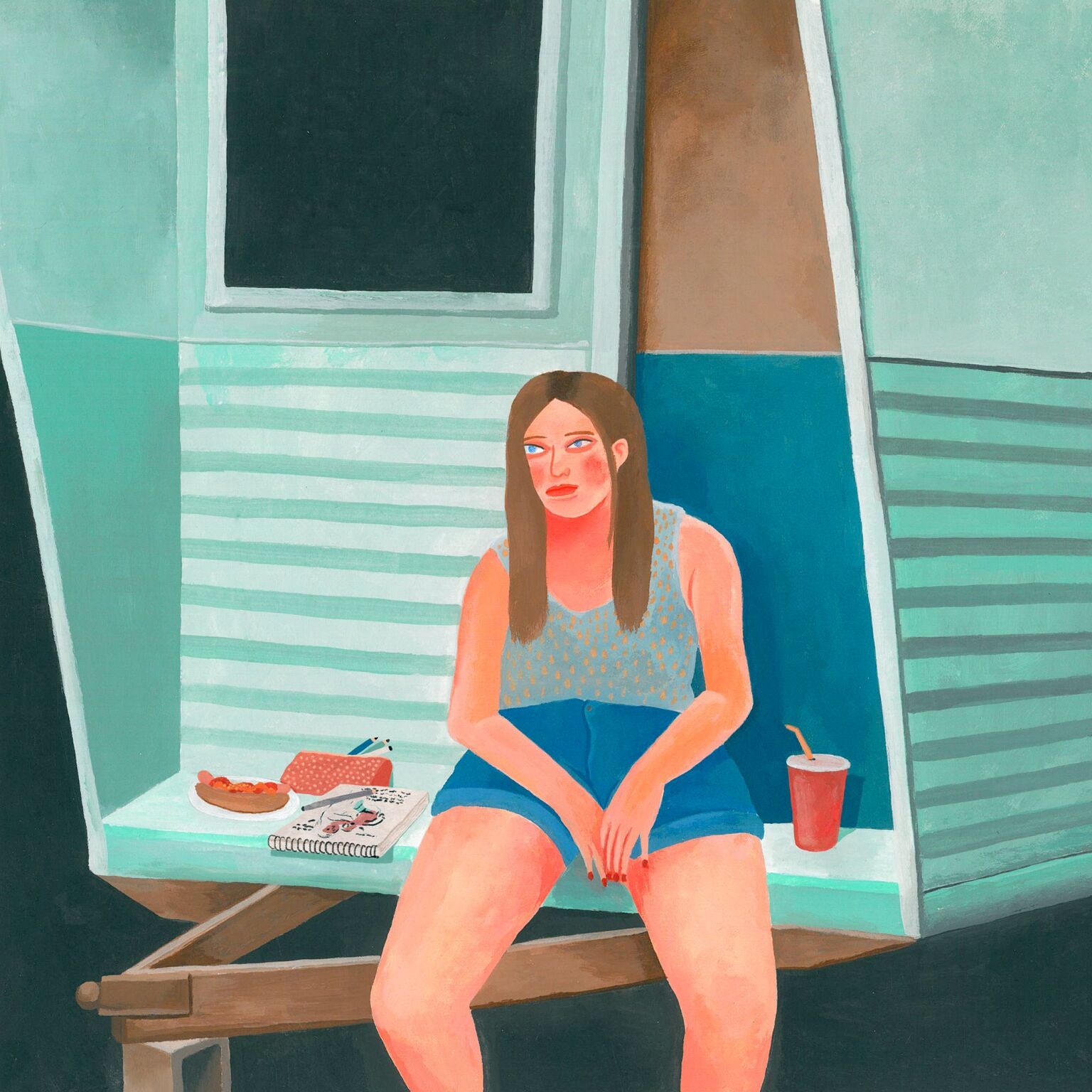 I wish I could have a house.

I feel ashamed to say that. It’s like saying I want to be an admired professional athlete, when I’ve done absolutely nothing in my life to merit such a thing. I have very little money, a freelance job that could disappear at any moment, insurmountable debt, and a worthless, embarrassing art degree.

But I don’t even want a nice house. It doesn’t even have to be a house. It could be an old trailer parked on some unbuildable piece of land in the middle of nowhere, or a tree house built for children. Just something to make me feel like I’m investing in my future and paying toward something that could someday be mine. A safety net.

But the cruel reality is that buying a house will probably be forever impossible, given the credit score I ruined by not being able to make payments to my student loans for several years, unless I find a bag of unmarked bills.

My debt, bad credit, and unstable income are the direct result of obtaining the art degree I decided to get when I was a seventeen-year-old who had never had a job, who was so surrounded by poverty that I believed my struggling, slightly-above-the-poverty-line family was “middle class,” and whose entire concept of edgy/alternative art revolved around Andy Warhol. This teenage version of myself singlehandedly fucked shit up for every other version of myself forevermore. I like to think that I was actively cultivating my adorably self-destructive sense of humor, but I think I was just dumb, or maybe horny for the boys I thought would be at art school.

The only way I see out of this impossibly dark and claustrophobic debt hole (aside from the bag of unmarked bills) is the same bachelor of fine arts that led me into the hole in the first place. A BFA is essentially an expensive lottery ticket, with big payouts to the very select few who are somehow able to get people to pay them for their work. Ironically, the only way I can keep playing this lottery is to continue prioritizing making art over making money. If you’re not willing to stop making art and you’re not willing to be poor forever, you have no choice but to keep trying, to keep believing that this extremely unlikely payout could still happen to you.

I may be making this ratio up, but I think it’s something like one out of every four hundred million artists is able to support themselves with their art. They’re not great odds, but I’ve already put so much money and energy into this system, it would be a waste to disengage at this point. And sometimes it seems like I’m making progress, since last year I sold a book (although “sold” is a weird way to put it, since I got a $0 advance from my publisher (but I don’t write books hoping for money (I don’t know why I do it))).

> Sometimes I’m glad I went to art school, because the lack of general education is a really good excuse for not knowing extremely basic things about the world.

Last year, Ian and I both started freelance jobs making emoji for a messaging start-up. It’s my first art-related job (shout out to the nepotism of my high-school ex, who was in charge of hiring). To learn how to use Adobe Illustrator, as was required for the job, I took a course on lynda.com for $30. I tried not to think about the $3,000 Adobe Illustrator class I took in art school that somehow taught me nothing. The only thing I remember creating in my $3,000 Adobe Illustrator class is an elephant version of Oscar Wilde. My elephant Oscar Wilde vector art is very painful to remember because of how ugly and stupid it was, and how many weeks it took me to make it. Long Live Obsolete Hard Drives With Old Art on Them That You Are Eventually Forced to Throw Away!

Maybe I can climb the emoji corporate ladder and someday land a top-tier emoji-design position that will possibly pay me enough for me to get my life together. The only thing I imagine stopping me is the fact that I’m barely interested in the field. The other day I had to check my phone to see if a tree emoji existed in iOS because I just don’t even care enough to retain that information. There are, in fact, three tree emoji, four if you count the palm tree on an island, five if you count the cactus. But I wouldn’t recommend it, because a cactus is not a tree. I even Googled “is a cactus a tree?” to make sure, because I don’t trust myself with anything. Sometimes I’m glad I went to art school, because the lack of general education is a really good excuse for not knowing extremely basic things about the world.

I hope it doesn’t sound like I regret art school. Art school is amazing. It’s four years of slowly eating Stouffer’s lasagna out of the cardboard bowl it was cooked in while pondering the meaning of your self. It’s fancy, self-indulgent, and technically an education. You can tell people you’re going to college and they conjure images of you studying textbooks and learning how to think rationally. Meanwhile, you’re writing a long prose poem about how eating food from McDonald’s is impossible while warming up Stouffer’s lasagna in the microwave (it was my thing). I honestly feel lucky that banks wanted to prey on me so badly they lent me money for art school and billed me later. It was there that I learned that art is something to be taken seriously, to better yourself with, to help you engage with the world.

“Your emoji-design job is bullshit,” the banks told Ian.

_Every job anyone I have ever known has ever had has been bullshit,_ I imagined countering.

_You know that is a crazy statement,_ the banks would say.

I would say, _How is it that seventeen-year-old me was able to borrow an obscene amount of money for a degree that had almost zero likelihood of helping me find a career, and yet borrowing less than that for something tangible that would definitely make my life easier is out of the question?_

_This is way more complicated than you realize, Chelsea,_ the banks would say. _You went to art school, you say? That’s not a real education. We don’t have time to explain the financial industry to you. Tell your little boyfriend to get a real job._

“It’s not like we can’t afford it. Renting an apartment is more than a mortgage payment would be,” Ian said. “We want a really simple, cheap house.”

We started fantasizing about renting-to-own a busted trailer with the $15,000. We looked at tiny undesirable lots that were filled with garbage even in the photos advertising them. I imagined cleaning up the property, moving the garbage artfully to the perimeter to form a lovely garbage fence. I imagined drying my laundry outside to avoid trips to the Laundromat, getting an aggressive guard dog, walking to 7-Eleven without a bra to buy a hot dog and scratcher tickets, peeking out my trailer windows at the pesky neighbors.

I did a little math and realized we would need at least double the money in order to buy a crappy used trailer on a lot. It’s a hard fact to swallow that the image most privileged people conjure when they think of poor people is my unrealistic aspiration. I need to make double the amount of emoji I ever thought was possible. Triple! Quadruple! If there are words like this after “quadruple,” I don’t know them. That imaginary banker was right. An art-school education is not very well-rounded.

Oh, I just remembered: “quintuple” — I Googled it to make sure it’s a real word.

*Chelsea Martin is the author of five books, including* Caca Dolce: Essays from a Lowbrow Life, *forthcoming from Soft Skull in August 2017. Follow her (1).*