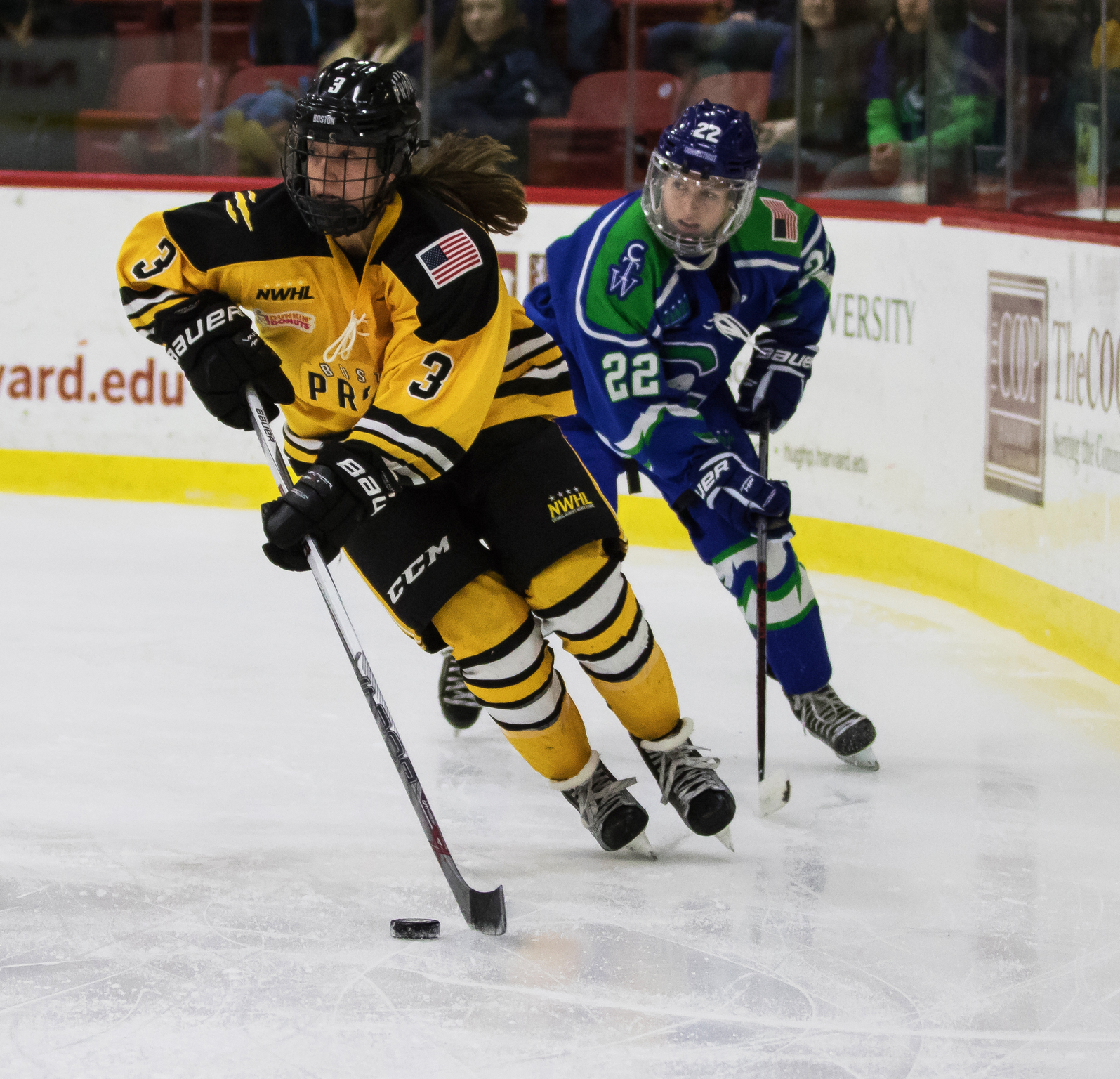 Two-time Olympian Hilary Knight, the most famous women’s-ice-hockey player in America, picks at her food at a Mexican restaurant in Medford, Massachusetts, at 9 p.m. on a Tuesday. She’s driven over from a rink in Everett, Massachusetts, where her professional team, the Boston Pride of the National Women’s Hockey League, had held practice.

“Do I think I’m worth what I’m getting paid?” The 26-year-old repeats my question, only with an edge.

Arguably the most talented member on the NWHL’s most Olympian-heavy roster, she will be paid $22,000 in this inaugural season. The salary will tie for the highest on her team. It will also represent a quarter of one percent of what Patrice Bergeron, the highest-paid player on the Boston Bruins, will make this year.

She leans forward, shaking her head.

“Absolutely not. I am worth way more than that.”

Before 2015, women’s-hockey players had never been paid to play their sport in the United States. And, originally, league founder (and former Northeastern University co-captain) Dani Rylan accepted the status quo when she planned to bring a Canadian Women’s Hockey League expansion team to New York to play without pay. (Rylan moved to New York after getting her master’s in sports leadership from Northeastern in 2012; when the NHL lockout delayed an expected job with the NHL Network, she opened her own coffee shop in East Harlem.)

But when the Canadian league opted not to expand, the 28-year-old thought bigger, opting to start a second league … one that would actually offer salaries.

An ambitious woman, Rylan named herself commissioner as well as general manager of the New York Riveters, one of the NWHL’s four teams (along with the Pride, the Connecticut Whale, and the Buffalo Beauts). Each team has a salary cap of $270,000; the average individual salary works out to about $15,000. Some players, like Knight, make more, and some make less. Players are paid biweekly, and the season runs from October to March, including 18 regular-season games, plus playoffs.

Rylan’s move is virtually unprecedented in women’s hockey, but it makes sense. At the 2014 Winter Olympics, the gold-medal game between the U.S. and Canada attracted 4.9 million televised viewers; it was the most-watched event in Sochi. Plus, the sport has grown markedly at the grassroots level. When women’s hockey first appeared in the Olympics in 1998, there were 19 Division I programs and 28,000 registered female players. Over the years, this mainstream exposure has steadily bolstered the growth of the game. Now, there are 35 Division I programs and 70,000 girls and women registered.

Even when the timing seems perfect, women’s leagues still struggle — and often fail. Who can forget the excitement that Brandi Chastain and her teammates brought to the sport of soccer in the 1999 Women’s World Cup? Hoping to harness that momentum, John Hendricks of the Discovery Channel launched the eight-team Women’s United Soccer Association (WUSA) in 2000. But by 2003, the league had folded.

> Even when the timing seems perfect, women’s leagues still struggle — and often fail.​

“I was intoxicated by what I witnessed in 1999 with the corporate sponsorship,” Hendricks told the Los Angeles Times when the league went belly up. “I mistakenly assumed it would overflow onto the league.”

Selling sponsors on millions of guaranteed viewers for an Olympics or World Cup is one thing. Selling them on women’s sports every other day of the year is another thing entirely. And there’s been no indication that this challenge will be any easier for women’s ice hockey — as of December 27, the average attendance at an NWHL game was 900 people. In comparison, the NHL’s lowest average overall attendance this season belongs to the Carolina Hurricanes, with 14,258 (as of this writing).

While the NWHL has had some encouraging developments, including its first corporate sponsorship (Dunkin’ Donuts) and its first televised broadcasting agreement (New England Sports Network will air eight of the Pride’s home games this season), its solvency is still debatable. If the NHL got involved, it could help. The WNBA, which finished its 19th season in October, was able to survive its early years in part because the NBA contributed millions of dollars in direct support.

Patrick Burke, the NHL’s director of player safety who has worked closely with the NWHL and the CWHL, said the NHL is exploring opportunities with both leagues. Translation: for now — and until the NWHL can prove its appeal to an untested market — there will be no official partnership, no influx of dollars.

At this point, none of the NWHL teams are privately owned. And besides the corporate sponsorship and partnerships, the league has not announced its private investors (though one investor revealed himself in an ESPNW interview). So, realistically, how long will the league be able to foot the bill?

Then, there’s the matter of life off the ice. Every player on the Pride must balance her hockey career with other commitments. Many of the players work other full-time jobs — just like their CWHL counterparts. Jillian Dempsey, who starred at Harvard, faces an exhausting schedule: teaching second grade at Community Day Arlington in Lawrence, Massachusetts, as part of the Teach for America program, and still having to summon the energy to be effective on the rink for her games on weekends — which are even more draining if there’s travel involved. “By the time Wednesday hits, I am so exhausted,” the 24-year-old says. “The rink is my favorite place, but sometimes I wonder how I’m able to stay awake while I’m driving there.”

Despite all the league’s growing pains, the NWHL’s pioneers remain optimistic and, yes, grateful. “I would love to get paid as much as the Bruins because I think we deserve it,” says Olympian and Pride forward Brianna Decker. “But I’ve played my entire career without getting paid, so I’m just playing for the love of the game and having fun with it.”

“Our whole lives, we’ve been told we’re not going to make any money playing hockey, that we’ll only be on TV every four years,” Knight says. “From an emotional standpoint, that adds up. If you’re just chasing a dream, how would you know what’s on the other side?”

Chances are, you wouldn’t. Today, more female athletes than ever are household names — Ronda Rousey, Misty Copeland, Serena Williams, Abby Wambach — but the handful of high-profilers doesn’t erase the validity of Knight’s point: if you still grow up being told you’ll never earn as much as the men, how do you know your worth? And how do you demand more? As a female athlete, if you ask for too much — if you appear ungrateful for what you do have — the idea that it could all be taken away, that you’ll be back where you started, is always lurking.

> As a female athlete, if you ask for too much — if you appear ungrateful for what you do have — the idea that it could all be taken away, that you’ll be back where you started, is always lurking.​

Even Knight concedes that it can sometimes feel surreal: “Somebody wants to pay me to play my sport. That’s huge.”

The NWHL’s slogan, “History Begins,” suggests a certain sense that these pioneers should be grateful: you’re making *history*, after all — even if, in the here and now, it’s sometimes hard to see the glory.

Allied Veterans Memorial Rink, a worn-down arena nestled into a residential district in Everett, is a pretty no-frills place for a professional team to be practicing. Fifteen minutes before practice at 7 p.m., the lobby is filled with youth ice-hockey players who’ve just skated. A man stands with two young girls with hockey bags slung over their shoulders — his daughters, maybe. He tells them, excitedly, that a women’s professional team is about to take the ice.

The girls nod, smile, then turn back to their phones.

Soon, the lobby is empty, except for two people sitting on a bench in a dark corner, lacing their skates and sketching drills on a whiteboard. They are the Pride’s coaches, Bobby Jay and Lauren McAuliffe.

Six minutes after the hour, the ice is still empty, and there is not a single person in the stands. The boards, usually plastered with advertisements, are blank except for one green and yellow rectangle mottled with puck marks. It reads “Thousands of Visual Impressions Generated / Your Message Here,” accompanied by a website link: an advertisement for an advertisement.

When the players take the ice at 7:07, two young boys burst into the arena, clambering across the stands. One is in red, the other blue. They sit, captive, hands on their knees, as the Pride players warm up. Before the end of the first drill, they sprint back out.

But the players pay the small boys no mind. They carry on with crisp passes, yelling for one another, their voices echoing in the sharp cold air. In these moments, against the odds, they are full of joy.

*Avery Stone is a writer and reporter living in Brooklyn.*