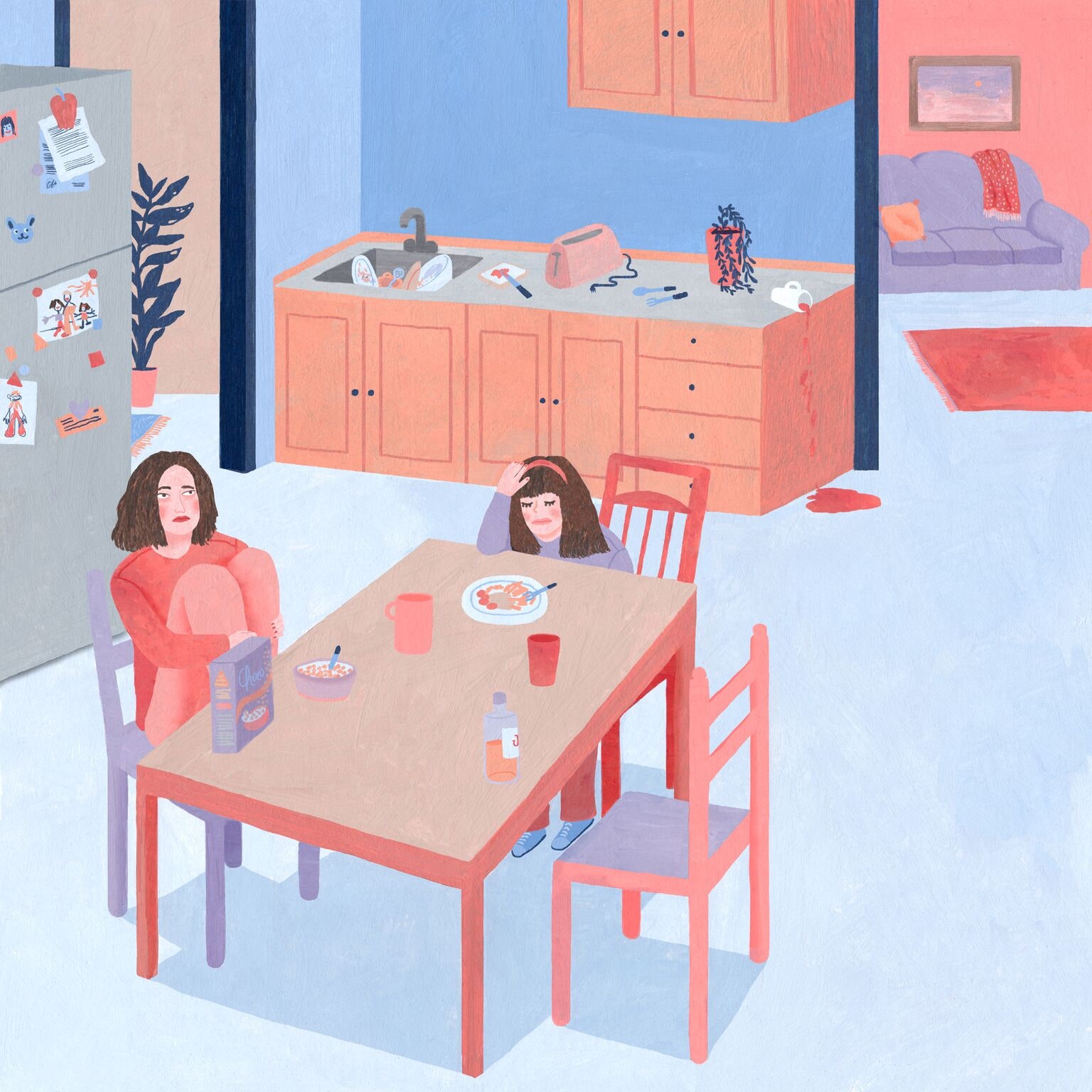 The first time I saw the apartment on Willoughby Road, I instantly disliked it. It was old and cramped, perched above a Persian-rug shop. My sister Julia and I were told that we’d be moving — from our large house in the suburbs — to Willoughby Road within the week. I was sixteen, she was twelve, and we loathed the idea. My mother, newly separated and independent, was exhilarated. As we drove away, she blasted Joan Armatrading’s “Me Myself I” on the car stereo. The sunroof was down. Her hair flapped in the wind.

The apartment was long and narrow, starting with the kitchen. You entered from the back of the shop, up an old concrete staircase with a very loose railing. It was a nightmare in heels. The living room looked out onto our very own slice of busy Willoughby Road: a liquor shop, a Domino’s Pizza, and a fish-and-chips joint. The fish and chips were our favorite until my sister caught the chef wiping her armpits. Typically a very shy child, Julia leaned over the counter and asked the woman if she wouldn’t mind please using some latex gloves. The lady snorted. We never went in again.

My sister and I shared a bedroom. We put the computer in the middle, so we could take turns playing the Sims while the other watched from her bed. The room’s only window looked directly onto a brick wall and a family of pigeons. Somehow, the birds never flew in. Above my bed, I hung a street sign that said “Hump”; my friend Tom had stolen it for me, and it was my most prized possession.

“It’s an apartment for just the girls,” my mother kept saying. She knew we hated it, but she was desperate to make it fun and fresh and different. In the living room she laid out a Persian rug — a gift from downstairs! — and hung some hot-pink curtains. “Aren’t they cool?” she said. She invited her friend Candy over, and they repainted the kitchen. I watched them sitting on the floor in old T-shirts, drinking tea and mulling over my parents’ separation. When they laughed about getting high on paint fumes, I laughed along with them. I had a hint of a feeling. Maybe this apartment might just be the thing. Just the girls.

Not long after we moved in, my mother got a new boyfriend and seemed to change completely. Suddenly, we were enemies. On warm nights, we kept the front door open, while our neighbors, the quiet and lovely owners of a vegan café, would listen to our screaming matches with disconcerted faces, their scrappy old dog Tin Tin howling in solidarity. Inside, we were suffocating. I have the clearest memory of sitting on the concrete steps and crying. Of looking out at the car park that faced our kitchen and feeling everything I’d known to be certain disappearing. The panic was unnecessary but so intensely overwhelming.

> It was a time of freedom, but with it came a new kind of responsibility.

My mother, now newly in love, spent more and more time away from the apartment. To make up for her absence, I invited friends over whenever I could. I threw parties and we’d sit on the roof, smoking and drinking, yelling at the cars streaming down Willoughby. We were teenagers, desperate to grow up quickly. Too fast and too keen, bound together by our urgency. Some nights, we’d drag all of the mattresses and pillows into the living room and have sleepovers. We’d wear my mother’s cotton nighties and hold hands in the dark, sharing a rare kind of intimacy. The kind only found in the liminal space that belongs to adolescence.

It was a time of freedom, but with it came a new kind of responsibility. Julia had not taken my parents’ divorce well, and I felt the weight of her struggles on my unprepared shoulders. At times, my inadequacy was glaringly obvious. I once forgot a raw chicken in our oven, and it wasn’t until several days later, when my mother returned, that she found it, rotting. The smell had filled the entire apartment, but we’d barely noticed it.

By the time high school ended, I was a combination of obligation, outrage, and rebellion. One night, my friend Josie and I ran out onto Willoughby Road in the pouring rain and hailed a taxi. We were wasted, wearing two of my mother’s Peruvian ponchos, headed to the 24-7 pancake restaurant in the city. We put on our best British accents and demanded a bottle of the finest Chardonnay. We ended the night chased by a security guard, and then Josie fell into a fountain.

When I was twenty, my mother told us she wasn’t going to renew the lease on Willoughby Road. She planned to move in part time with her boyfriend and wanted a new apartment for the remainder. She was ready for a change again. I told my sister that we’d get our own place, without realizing she was still in high school and that I was about to start college. At the last minute, I changed my mind and decided to move in with roommates instead. Julia said she understood. But I knew it to be a betrayal. Her pale, anxious face wondered what was next. I told her she could keep the Sims, and we packed up the apartment in separate boxes.

My mother found a new place that was far from Willoughby Road and even farther away from where I was living. I was grateful for the distance. Slowly, the anger I’d been feeling toward her began to dissipate. I no longer resented her empty bedroom, or the envelopes in the freezer stuffed with money for dinner. I was relieved of the need to judge her and free to love her again. It happened without my trying. I didn’t stop to think that Julia was still dealing with the same frustrations. Or maybe I did, and that’s why I felt guilty. I tell my sister everything, but that was a conversation left unspoken.

Now, ten years later, I find myself longing for the days in that apartment. Willoughby Road has stopped feeling too steeped in growing pains, too sensitive to touch, too layered. I’m nostalgic for the last time we were all together, when we were somehow united. When my sister’s face was the first thing I saw in the morning. When it was just the girls, starting something.

_Olivia Clement is a playwright and writer based in New York._