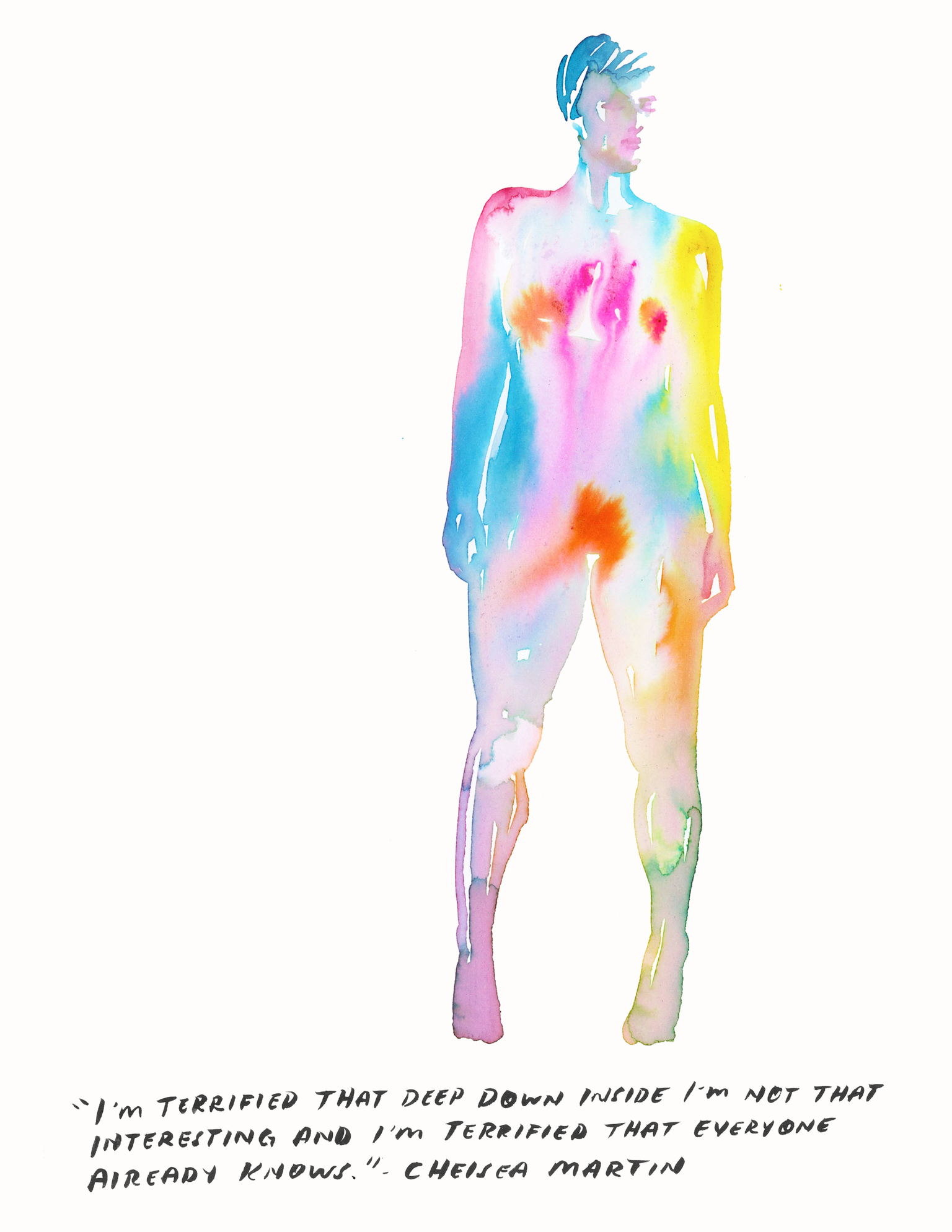 I want to have an art show titled I FIND MYSELF SO INTERESTING.

ISN’T THIS SUCH AN INTERESTING DETAIL ABOUT MYSELF?

THIS ONE IS ABOUT MY TORTURED AND UNSUSTAINABLE INNER LIFE

ANOTHER CONFUSING REFERENCE TO MY CHILDHOOD!

I don’t even care if there’s wine and cheese at the opening. I just want complete control of how I’m interpreted as an artist and human person, and to leave no room for anyone to project anything of their own on to me.

But I’d be really surprised if there wasn’t cheese at the opening.

I arrived at Mickey’s apartment crying and he asked me what was wrong. I threw myself onto the floor in front of him and he asked if _Project Runway_ had made me cry.

I said that it had and he asked who was kicked off and I said, “Nobody, the judges let them all stay” and faintly wept or pretended to weep, and Mickey told me I was crazy.

In the movie version of my life, there should be a group of confident-looking people standing in front of my work saying, “Seminal,” to each other over and over.

And they should definitely include that word a few times in the trailer for that movie, so people know what to expect.

And it would be good if they could cast someone unseemly to play the role of me because then I would have someone tragic to compare myself to for the rest of my life.

I am willing myself to have a manic episode just so I can get out of bed at some point today.

AND I’LL STILL BE AFRAID TO TALK TO YOU, TOO

I have a new concept for a show. It will be called BEST JUST LEAVE HER ALONE.

I’ll hire a woman to perform in the gallery. She will be required to wander around the space, never talking, never making eye contact with anyone. I’ll instruct everyone not to talk to her.

I will invite all her friends and loved ones to the show. I will invite her ex-boyfriends and people she was mean to in high school and the neighbor kid who she used to babysit who is now in college. I’ll invite her ex–best friend who she hasn’t talked to in eight years. I’ll find all these people on Facebook. I’ll hire them if I have to. I’ll instruct them not to talk to the performer under any circumstances.

I’ll leave a comment book at the front of the gallery, and there will be a big sign over it that says: PLEASE WRITE ANYTHING YOU WISH. But I will have informed everyone ahead of time that the only thing they’re permitted to write is: LOOKS LIKE YOU’RE DOING WELL and their own name.

I can’t tell if I’m making the choice to be a total wreck in every avenue of my life or if there is some exterior force that’s keeping me drugged and asleep in some _Matrix_ -like existence (full disclosure: haven’t seen the movie) and the drugs aren’t set to the correct levels but no one in charge is paying attention and this is all a horrible, hallucinatory nightmare that is happening to me through absolutely no fault of my own.

My favorite part of life is that it feels like a long dramatic interpretation of “Push” by Matchbox Twenty.

Sometimes I will put a not-very-sad song on and sing it while practicing to cry and stop crying on command. Sometimes I videotape myself doing this. At first I thought it was art, but now I think maybe it’s something else.

I showed Courtney my Rob Thomas drawing and she said it made her sad, which made me feel like she could see into my soul, in a bad way.

It made me want to do a better job covering up my soul and making elaborate excuses for the parts that could still be seen.

But if Rob Thomas’s face can’t cover up a sad soul then I’m all out of ideas.

I DON’T LIKE ART UNLESS THE ARTIST HAS ADMITTED FAILURE

I dreamt I saw Mickey after several years of not seeing him. He had decided to become “Hispanic” for some reason relating to fashion. He looked like a different person, but I hugged him and felt a strong, familiar sadness.

I’m going to call my art show MICKEY, and on opening night when Mickey notices that the work in the show has little to do with him and confronts me about it, I’ll pretend I’m getting a phone call and the pretend phone call won’t go well and I’ll start crying loudly and ask Mickey if he’ll drive me to the nearest bus stop and, I don’t know, maybe I’ll find purpose and meaning at the bus stop.

*Chelsea Martin is the author of* Even Though I Don’t Miss You *(Short Flight/Long Drive, 2013), among other books. Her novella* Mickey *will be published in July 2016 by Curbside Splendor Publishing. More at jerkethics.com.​*