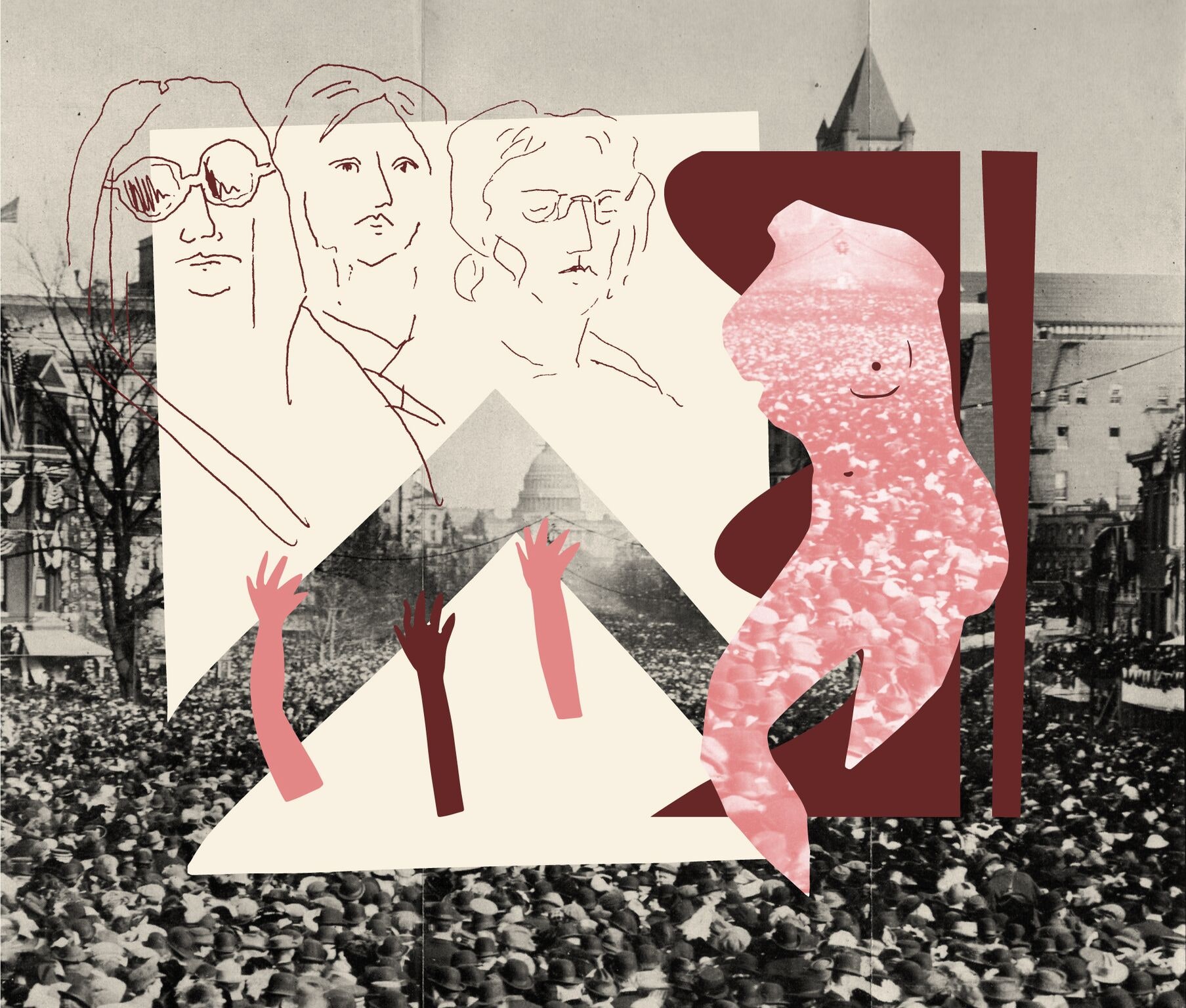 _On January 21, the day after Donald Trump’s inauguration, women will march on Washington with a message for the new administration on their first day: women’s rights are human rights. By doing so, they are not only fighting for our future, but honoring the long legacy of women marching on Washington to bring about meaningful change._

On the eve of President Woodrow Wilson’s inauguration, Helen Keller was one of 5,000 women who “march in a spirit of protest against the political organization of society, from which women are excluded.” They lined up under banners representing their states, their occupations, and their organizations in Washington, D.C., accompanied by nine bands, four mounted brigades, and twenty floats.

Keller wasn’t the only famous woman in attendance. Jeanette Rankin marched under the Montana banner and would return four years later as the first U.S. congresswoman. Ida B. Wells defiantly marched with her state, against instructions from organizers Alice Paul and the National American Woman Suffrage Association. White Southern members had insisted women of color should march in the back with a segregated unit.

Another surprise: the tens of thousands of men in town for the inauguration had not been cleared from the streets, and those men, most of whom had been born with the right to vote, thought of the privilege as exclusive to their gender. And so they jeered at the women, at first, and then they jostled and shoved and tripped the Suffragists. Police were there, but most of the men in uniform stood still, complicit in the violence. Red Cross ambulances struggled to get to the 100 women who, newspapers would later report, ended up in the hospital.

Finally, the Massachusetts and Pennsylvania National Guard stepped in, and young men from the Maryland Agricultural College formed a human shield, helping the women finish the march. It led to Congressional hearings, but not the kind the women had hoped for. The hearings were about the violence and resulted in the dismissal of the superintendent of police. The next time Congress considered these women, seven years later, they finally got what they had come for on that cold winter’s day: the right to vote.

Fifty-five years after she’d marched for the right to vote, Jeanette Rankin, then 87, held a banner that read: “End the war in Vietnam and the social crisis at home!” Five thousand women followed, many clad in black as a tribute to the war’s mounting death toll. They sang, along with folk artist Judy Collins, “This Land Is Your Land.”

The march was technically illegal. The Capitol Police invoked a law forbidding demonstrations that had never once, despite having been on the books since 1882, been used. The Brigade sued the Chief, but nothing had been decided on the day of the march.

The Capitol Police could try to challenge the women’s First Amendment rights, but ultimately, Rankin had the best representation — herself. As a former congresswoman, she could enter the House floor and hand a peace petition directly to the House Speaker, John McCormack.

Rankin met up with Coretta Scott King, 40, who gave a speech calling for peace at the Omni Shoreham Hotel, but not all women felt represented by wives and mothers. A group of 200 to 500 women wearing miniskirts tried to take over the stage, and encouraged the marchers to join them in a mock funeral procession of “traditional womanhood” at Arlington National Cemetery.

The _Washington Post_ described the Jeanette Rankin Brigade as “peaceful and ladylike,” though Congress did not act on its petition. Rankin died in 1973 at the age of 92. A statue of her stands in the Capitol’s Statuary Hall. The inscription reads “I Cannot Vote for War,” commemorating neither of her marches but her statement as the only member out of 389 delegates in the House who refused, after the attack on Pearl Harbor, to vote in favor of going to war with Japan.

On the 50th anniversary of women’s suffrage, women earned 59 cents on the dollar, despite the Equal Pay Act of 1963. Only 5 to 10 percent were accepted into institutions of higher education. In 43 states, women were prohibited from carrying more than 25 pounds, about the size of a toddler, and in many of those states, they still couldn’t serve on a jury or own property.

In D.C., 1,000 women marched down Connecticut Avenue and presented the Senate with 1,500 signatures, but this was a nationwide effort. Twenty to fifty thousand feminists marched throughout the country demanding equal pay and greater political power. At the time — a period when Congress was discussing the Equal Rights Amendment — it was the largest gathering of women in the United States.

In turn, the country was watching them, and highly critical. The _New York Times_’s headline read “Leading Feminist Puts Hairdo Before Strike,” noting that Betty Friedan, the president of the National Organization for Women and march leader, was 20 minutes late to her appearance in New York, and had been running similar articles in the previous days, asserting that traditional women’s groups like the League of Women Voters and Daughters of the American Revolution “prefer to ignore Women’s Lib.” The paper quoted sources who characterized the women as “a band of wild lesbians” and who put on “ridiculous exhibitions.”

In 1971, Congress passed a resolution declaring August 26 Women’s Equality Day. The Women’s Strike for Equality is now remembered as the first major protest of the Women’s Liberation Movement. Both houses passed the ERA, but Phyllis Schlafly argued it disadvantaged housewives and successfully mobilized conservative women in opposition. Ratification of the amendment slowed by 1973, falling short of the states needed.

The 95-degree heat didn’t stop swarms of women dressed in white, gold, and purple from showing up in Washington to demand an extension to the deadline to ratify the Equal Rights Amendment, but their swelling numbers delayed the march by 90 minutes. Once Constitution Avenue had been completely shut down, 325 delegations, clad in the colors of the National Women’s Party, began their march. The first banner to be seen read “Alice Paul, 1885–1977,” a tribute to the late author of the ERA, and those who held it waited for three hours for the last group to join them on the west steps of the Capitol.

They succeeded in the extension, although the ERA would be defeated in 1982. Legal scholar Joan C. Williams argued it was dead the moment Phyllis Schlafly “turned it into a war among women over gender roles.” Her anti-ERA movement also received support from special-interest groups, Roman Catholics, Evangelical Christians, Mormons, Orthodox Jews, and Southern whites.

Since 1982, the amendment has been reintroduced in every session of Congress.

**April 25, 2004. March for Women’s Lives. Sponsored by the National Organization for Women.**

The largest march in U.S. history started, unofficially, in 1986, when 80,000 women took to Washington in protest of anti-abortion laws pending in the Supreme Court. In April 1989, that number swelled to nearly 300,000 and included Madeleine Albright, who would later become the first female secretary of State. The National Organization for Women continued to hold demonstrations when women’s rights, including reproductive rights, were threatened, and after the Partial-Birth Abortion Ban Act of 2003, they began to organize a milestone protest.

On April 25, 2004, more than 1.1 million people marched for Women’s Lives. NOW was joined by the National Latina Institute for Reproductive Health, Planned Parenthood, the Black Women’s Health Imperative, the National Association for the Advancement of Colored People Code Pink, the American Civil Liberties Union, and many others. Despite the large numbers and presence of pro-life protesters, there were no incidents of violence. Albright was once again in attendance, as well as Gloria Steinem, Hillary Clinton, and celebrities ranging from Moby to Julianne Moore.

The march proved to be largest in history — not just women’s history, but U.S. history — though the Partial-Birth Abortion Ban Act was not repealed.

Mothers are revered during election cycles and then generally ignored by politicians, but on Mother’s Day in 2000, around 750,000 men, women, and children forced elected officials to take their agenda seriously by putting on the largest demonstration for stricter gun laws in history. In addition, there were more than 70 related marches held in satellite cities around the world, adding another 150,000 to 200,000 people to the total head count.

The Million Mom March was a grassroots campaign led by women with little to no organizing experience, making their numbers all the more impressive. A community-based coalition in Bridgeport, Connecticut, had taken guns acquired through a buyback program and melted them into a 400-pound brass bell. One at a time, twelve children, representing the number of children shot and killed on a daily basis, came forward to ring it. Elsewhere, children were encouraged to write Mother’s Day cards to lawmakers. A memorial wall listed the names of 4,001 victims of gun violence.

“We’ve come here in the names of the children we love, the children we have lost, the children we have saved,” Hillary Clinton, then a Senate candidate in New York, told participants, some of whose children had been gunned down. The protesters would receive a different description from the media; articles led with moms checking to make sure everyone was wearing sunscreen, noted women crying, or dismissively suggested a “boosterish inflation” of totals — but no one could deny their impressive nationwide commitment to “common-sense gun control,” a struggle that continues today: already this year, a dozen children have been killed or injured in gun violence.