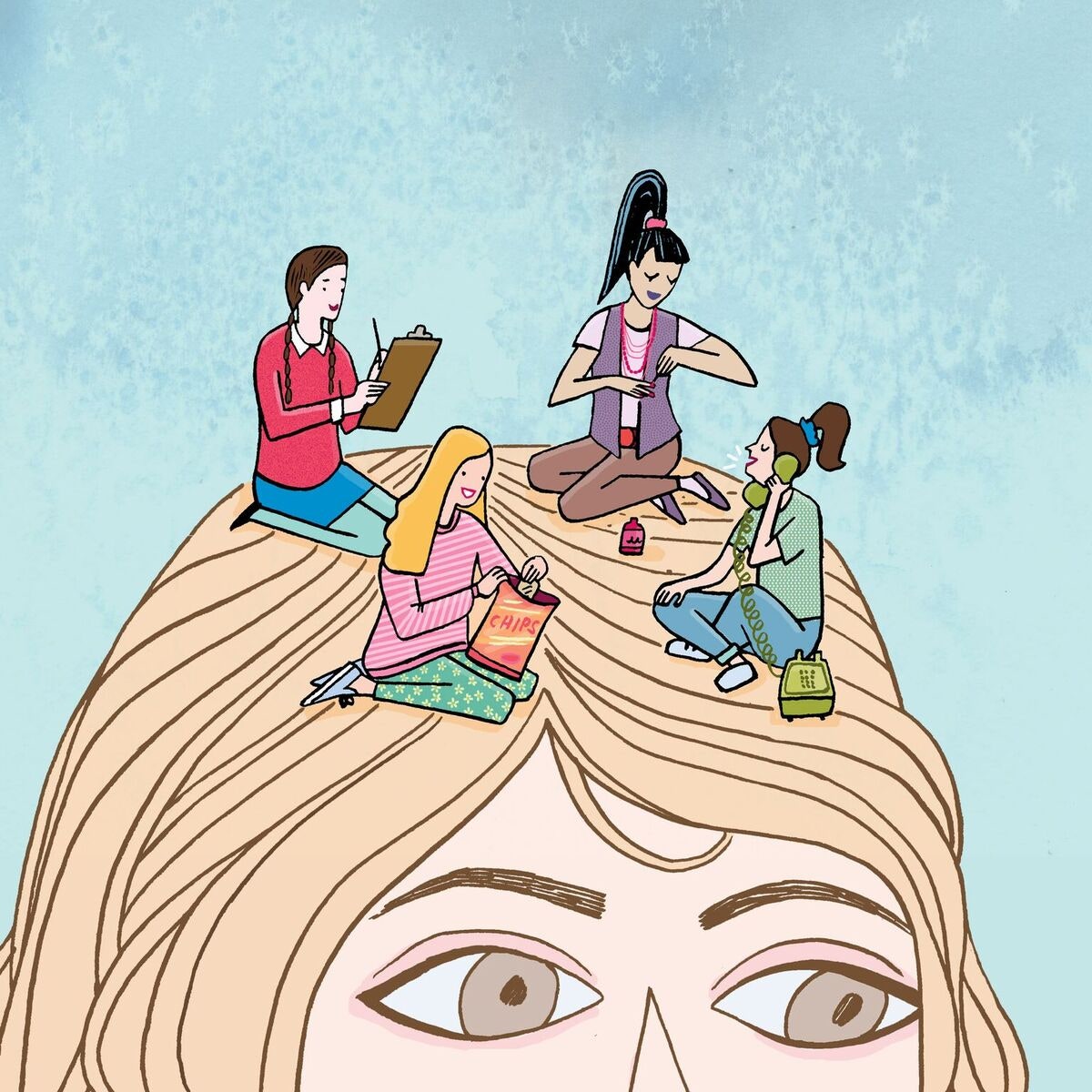 “We are all, aspirationally, Claudias,” a woman declared at a party recently. A bunch of us — all writers in our 30s — were deep into a heated conversation about which members of the Baby-Sitters Club we identify with most. I confessed that I have always thought of myself as a Mary Anne with a Dixie cup of Kristy thrown in. “You’re a Mary Anne with a Kristy moon,” someone said, offering an astrological assessment. “A Mary Anne with Kristy rising.”

For many girls coming of age in the ’80s and ’90s, *The Baby-Sitters Club,* the best-selling middle-grade series, was a PG precursor to *Sex and the City*: a story of female friendship in all its complexity, it featured a cast of highly appealing characters in whom almost anyone could locate some aspect of herself. There was Kristy (president and founder), a bossy tomboy and a child of divorce. Mary Anne (secretary), the shy only daughter of an overprotective widower, and the first to have a boyfriend. Stacey (treasurer), a stylish and sophisticated New York City native. And Claudia (VP), artistic, cool, with strict parents, a genius older sister, and her own telephone line. Eventually the club expanded to include alternate and junior officers as well.

In a recent phone interview from her home in upstate New York, author Ann M. Martin said she had relatability in mind from the start. Prior to *The Baby-Sitters Club,* she had written a handful of children’s books and worked as a teacher and editor. In 1986, when she began writing about middle schoolers who run a babysitting business in fictional Stoneybrook, Connecticut, she wanted them to have “different kinds of families, different ethnic backgrounds, different interests and personalities.” Martin knew those differences were part of what kept readers coming back. “Either they found something to relate to in each of the girls, or they strongly related to one.”

She decided to thicken the plot by giving one of them a secret. Her first idea: Stacey could have a father in jail for embezzlement. When Martin’s editor deemed that over the top, she settled on Stacey having diabetes instead.

Scholastic originally hired Martin to write four books — one from the point of view of each babysitter. But the series was an unexpected hit. In the end, *The Baby-Sitters Club* went on for fourteen years and became one of the best-selling middle-grade series of all time, with 213 titles published in nineteen languages, four spin-off series, and 176 million copies sold. Eventually, a small team of writers was hired to help Martin keep pace, but she continued to outline and edit every book.

> Scholastic originally hired Martin to write four books — one from the point of view of each babysitter. ​

There was an official fan club, a newsletter, a show on HBO, a feature film, and merchandise that included dolls, day planners, calendars, posters, trading cards, T-shirts, jewelry, board games, fanny packs, and, of course, Kid Kits, a version of the boxes of toys and crafts each babysitter brought along on the job.

Martin became a reluctant celebrity. She is naturally shy. (She based Mary Anne on herself.) Three years into writing the series, she still babysat on occasion, for a neighbor down the hall. Suddenly, a thousand people might show up at one of her book signings. Kids wanted to know everything about her. She received a thousand letters a month on average. The only other Scholastic author who got as many was *Goosebumps* writer R.L. Stine. David Levithan, editorial director of Scholastic and a longtime editor of *The Baby-Sitters Club* , said it wasn’t just the volume of Martin’s letters that set them apart, but the highly personal tone.

“It was ‘This is what’s happening in my family,'” he said. “Some of them really thought the characters were their friends. Others knew they weren’t real, but still they felt like they knew them.”

*Dear Ann: I absolutely love your books … My mom won’t let me baby-sit. At first she said I could. But she said no after awhile. Please write to my mom and dad—my mom so I can baby-sit, my dad so I can get a private phone.*

*Dear Ann: I have been having weird dreams lately about Stacey McGill. I was dreaming I went to New York to see her and she was my best friend. I don’t really have a best friend, but I have friends.*

Girls sometimes wrote to Martin about abuse or bullying or suicide. She replied to every letter, occasionally working with a child psychologist to craft a response. When readers sent suggestions for plots about what they were going through in their own lives, Martin tried to accommodate. A flood of requests for a story line about a friend who moves away led to *#13: Good-bye, Stacey. Good-bye.*

*She replied to every letter, occasionally working with a child psychologist to craft a response. ​*

“We didn’t realize until then that Stacey was the most popular girl in the series,” Martin said. “We chose the wrong one. We got so much upset mail. We knew right away that we had to move her back to Stoneybrook.” (Hence *#28: Welcome Back, Stacey!* )

*The Baby-Sitters Club* was perhaps the first series for girls with an entrepreneurial spirit. (Maybe it even played a small role in our generation’s tendency to start one’s own business and to take professional risks. Martin said one of the greatest parts for her has been hearing from librarians, editors, and authors who were drawn to their jobs by a love of her books). The series was responsible for making many of us think, for a time anyway, that there was no cooler pursuit than babysitting, even if most of us were too young for the job.

When my friends and I hung fliers like the ones in the books, advertising a way to reach several responsible sitters with a single call, we learned that there was not much demand for nine-year-old babysitters in our neighborhood. Some of us were offered the role of mother’s helper, a sort of pre-babysitting, in which you were not in charge, could not raid the fridge, and did not get paid. We had no interest. We wanted power. We wanted money. We wanted to babysit.

When I finally got hired, I was ecstatic, and dead serious about it. I made my own Kid Kit. I always washed the dishes in a bid to impress the parents. I’d leave one dish in the sink, a prop, which I would be scrubbing when they walked through the door.

Once adolescence hit, my collection of candy-colored *Baby-Sitters Club* books was moved from its place of prominence beside my bed to a box up in the attic. Later, though, whenever the topic of childhood favorites arose, *The Baby-Sitters Club* was always at the top of the list.

Unlike with other cult classics — *Harriet the Spy, Ramona,* anything by Judy Blume — many fans haven’t been content to leave the series in the past. The characters in *The Baby-Sitters Club* never got any older than thirteen. For years, readers have begged for a sequel, eager to know what the girls are doing now. But, Martin said, “when I think about them, they are always twelve and thirteen. That voice is the one that comes to me most naturally.”

> The characters in The Baby-Sitters Club never got any older than thirteen.​

Her fans, however, have brought the characters into the 21st century. There’s fan fiction online, and websites devoted to the club. A plotline involving *Baby-Sitters Mystery #12: Dawn and the Surfer Ghost* appeared on *The Unbreakable Kimmy Schmidt* last season. A new podcast, *The Babysitters Club Club*, features two guys in their 30s who discuss the books in order, debating everything from the role of the patriarchy in Stoneybrook to whether the club should be considered a Marxist cooperative or just a small business with a flat management structure. An illustrator named Siobhán Gallagher mocks up book covers for *The Jaded Quitters Club**,* which imagines each girl as a young adult experiencing existential malaise (i.e., *Stacey and the Crowd of Indistinguishable Beards and Man Buns.*)

In 2007, Kim Hutt Mayhew launched the blog What Claudia Wore, which chronicles the outfits of the club’s most flamboyant dresser. The blog attracted a loyal following and the attention of sites like Jezebel, Nylon, Refinery29, and urbanoutfitters.com. Mayhew was surprised by the reaction. She had started the site mostly for her own amusement, after buying a few of the books in a thrift store on a whim.

“I would reread a passage and it would be like I was time-traveling back to being eight years old, reading it with a Popsicle in my hand,” she said. She found that she could often remember exactly what Claudia was wearing in a given book, down to the accessories: “It’s a piece of knowledge that will never leave my head that Claudia once wore a Pebbles from *The Flintstones–* type outfit and had a ponytail on top of her head and there were polka dots,” she said. “Some of those themes were just too wild to ever be pushed out of my mind by more relevant information, like my Social Security number.”

Martin appreciates all the love, though she doesn’t engage with it. She is on to new books. And she’s decidedly low-tech. She still listens to music on a Discman. Someone else manages her social-media presence. “I’ve never seen Twitter,” she said. “I’m not even entirely certain what it is.”

In 2013, she donated her papers to Smith College, her alma mater, where they joined the collections of Sylvia Plath and Virginia Woolf. Martin Antonetti, Smith’s curator of rare books, has called the Martin papers “the single most noteworthy acquisition we have made.” He recalled via email that it was a student intern, “who had grown up and read Ann’s books (mostly in Hindi) in remote Lesotho, who first made me aware of the remarkable influence and ubiquity of the BSC.”

> In 2013, she donated her papers to Smith College, her alma mater, where they joined the collections of Sylvia Plath and Virginia Woolf.​

For a time, the books went out of print. Scholastic brought them back in 2009, with the addition of a prequel by Martin, after fans demanded their return. Some just didn’t want to live in a world in which *The Baby-Sitters Club* could not be had. Others were mothers now, wanting to pass their passion for the series on to their daughters.

Since their rerelease, the books haven’t reached the level of popularity they once had. But when Scholastic hired best-selling graphic novelist Raina Telgemeier, 38, to adapt the series, her version took off. At one point earlier this year, four of the top ten paperback graphic novels on the *New York Times* best-seller list were *The Baby-Sitters Club*. Telgemeier grew up reading the *BSC.* It seems fitting that one of Martin’s original fans is responsible for introducing the books to a new generation.

As for those of us who have loved them from the start, the books are still with us, popping up in conversation at cocktail parties, conjuring the best parts of childhood whenever we see them on a bookshelf.

Last month, Martin and Telgemeier appeared on a panel together. The crowd was mixed — seven- and eight-year-olds had come to see Telgemeier. Women in their 30s were there for Martin, still hanging on her every word.

*J. Courtney Sullivan is the author of the novels* Commencement, Maine, *and* The Engagements*.*