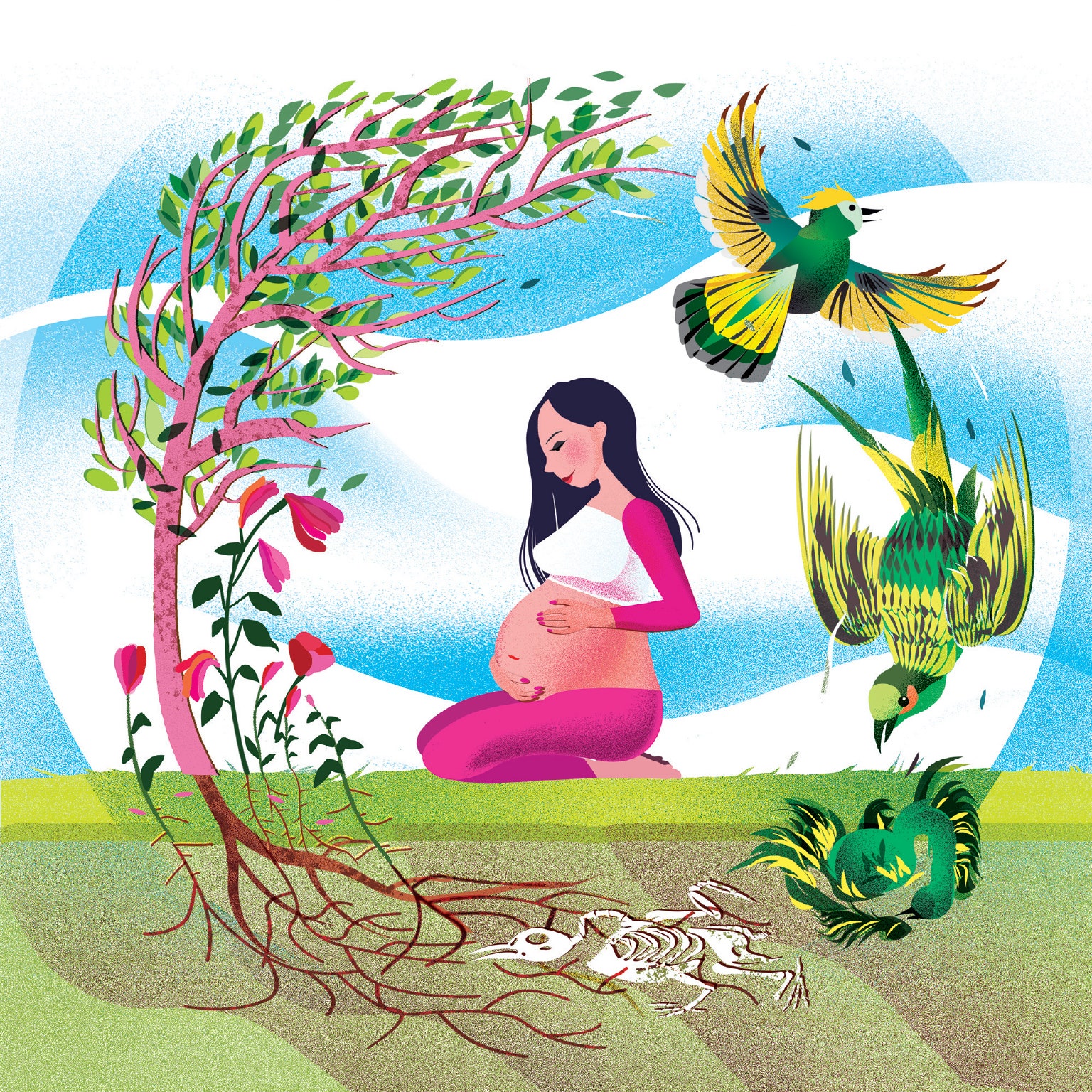 My grandmother died one month before I gave birth to my first child. She was 93 years old and passed away surrounded by her family at home in Los Angeles. My husband, Amir, and I named our daughter, in part, after her. This act, naming a baby after a lost loved one, is meant to reflect a more profound version of trite “cycle of life” platitudes nobody really wants to hear at funerals. The dead are still with us; our lives go on. It’s a nominal reincarnation of sorts.

Two years later, I was pregnant again with my second child — this time, a boy. We shared the news with our family, and there was a week or two of conventional grandparent joy, the anxious anticipation of a growing family, and a heavy focus on the life to come. My parents were thrilled, as were Amir’s — particularly his father.

When I was three months pregnant, we learned his diagnosis: acute myeloid leukemia (AML), one of the deadliest cancers. Amir, a physician, immediately understood the gravity of his father’s condition. You cannot remove a tumor from a bloodstream. You cannot cut it out. You cannot necessarily radiate it away.

When I was four months into my pregnancy, I shared the news with select friends. This wasn’t exactly a time to celebrate. I told friends I was pregnant in the same sentence I told them my father-in-law had cancer. Linguistic attachments, two halves of my life connected.

At five months, I underwent an ultrasound to make sure the baby was healthy. They found something troubling in his heart. I was feeling ill, breathless. I had stopped exercising because every time I moved, I felt contractions. My first pregnancy had drastically changed my perspective on gestation. My daughter, though born healthy, suffered a stroke at six weeks and spent significant time in the NICU. I couldn’t have a second sick baby. One time, shame on fate. Two times, shame on you.

I called my mother-in-law from the hospital. I knew that she was in another wing of the same hospital at the same time with my father-in-law while he underwent chemotherapy.

“Do you want to take a peek at your grandson?” I asked her, hoping this might bring her joy, even if it was only momentary. After all, we almost never spoke of my growing belly. The topic, though visible to all, was toxic, as if discussing one discounted the other.

“Yes,” she said. I heard the excitement in her voice. “I’m just sitting here.”

“Yes,” she said, and she walked several blocks to be by my side to watch a new life developing on a screen.

Within moments, the doctors told me that there was likely nothing to worry about. My son’s heart seemed fine, but we should repeat the ultrasound again in a month.

Nothing to _really_ worry about.

Words of poor comfort to a family whose emotions were split open.

At the six-month mark of my pregnancy, my father-in-law was getting sicker. He didn’t want visitors anymore. His immune system was gone, and he was living in a bubble at his home. We didn’t know how much time he had left but still held onto the desperate hope for a bone-marrow transplant, which offered him a slight chance at remission.

At seven months pregnant, we dropped by Amir’s parents’ house unannounced on a random Sunday afternoon. Everyone was in a particularly good mood. My father-in-law was laughing, my mother-in-law smiling with him, my sister-in-law and nephew making jokes. A house filled with life and laughter, frozen in a Sunday afternoon of nothingness.

> I listened to questions about the baby’s name. Strangers, distant family members, colleagues all came up to me, saying, “It’s the cycle of life.”

But my father-in-law had just been disqualified from the bone-marrow transplant because he was too sick to survive the procedure. So with few options remaining, the bubble was disassembled. The gloves and masks were gone; there was no longer a need to keep the home sterile to make sure he would last until the transplant. The lack of human contact that had pervaded his existence for seven months was forgotten, and Amir walked over to his father and touched his skin for the first time since his diagnosis. I watched from afar as they embraced by the window, two figures still until their bodies rippled into one.

On the drive home, I took Amir’s hand in mine. The baby was moving, his hand gliding under the skin of my belly. I didn’t place Amir’s hand on it.

I was away from Amir and his family when it happened, but I felt my belly rumble around his time of death.

At the funeral, Amir spoke intimately of his father, detailing their life together, mourning the life he’d hoped they would have as adults. He spoke of the emptiness in his daily routine, of the kindness he had learned, of the generosity of spirit. Of the fact that his father would never meet his own son. My belly thundered, and I swallowed a mouthful of vomit. I loved and missed him too.

When I’d met my future in-laws over ten years earlier, Amir’s father had struck me as different. A traditional “meet the parents”dinner ended with an oversized hug and an “I love you.”Amir told me it was _just because_.

“He loves me just because _you_ love me?”I asked. “That doesn’t make sense. Doesn’t he want to get to know me first? See my life’s résumé? Meet my parents?”

“Nope,”Amir shook his head, placing his arm around me. “Seeing this is enough for him.”

For seven days of Shiva, we told stories and laughed and cried, and I listened to questions about the baby’s name. Strangers, distant family members, colleagues all came up to me, saying, “It’s the cycle of life.”

“It’s going to be such a help to everyone.”

“Yes,”I would say, rubbing my belly, and then I would walk away, shielding my eyes, wanting to scream “No.”

His face couldn’t be Photoshopped over another to complete the family photo. He would be a boy on his own. And it was up to me alone to ensure that his growth was healthy, that his development continued on track. This baby was going to be born no matter the timing, no matter the need, no matter the hole he filled, whether it was the following day, the following month, or anytime thereafter.

But as we buried my father-in-law, people I didn’t know continued to approach me, always touching my belly and informing me of my unborn child’s role in this cycle of life.

“You’re going to name the baby after him, right?”

“This is going to be the best thing to happen to everyone.”

But there is no “best thing” that happens at a funeral.

Hours later, with the baby moving visibly through my dress, Amir and I walked into a bedroom at his mother’s house and, away from the guests, came up with our son’s name.

By the time I was eight months pregnant, I had been sent to the hospital for preterm labor multiple times. I spent many evenings strapped to a pink and blue monitoring belt to ensure that the baby was still healthy. He had irregular heartbeats. I was contracting too early, too quickly, too evenly. I was over 35, with a medical history. Nobody was willing to take a risk, so at any glimmer of an irregular fetal heartbeat, I was whisked away to Labor and Delivery for a daylong stay of tests and ultrasounds and cervical examinations, just a few floors above the bed where my father-in-law last slept.

Amir wasn’t with me for most of those visits. I navigated these appointments alone, spent many evenings admitted into the hospital alone. Shopped for baby clothes alone. Rearranged our apartment alone. While we were mourning the loss of his father separately, he was split, wanting to feel excitement but furious with himself for feeling any.

He rarely spoke of my pregnancy — of the excitement to come, the fear of raising two children, the novelty of a boy, my emotions and my body’s changes, the internal struggles of pregnancy, which I swallowed until they led me to the hospital five additional times in one month. We didn’t fight; we didn’t talk much at all. And it wasn’t his fault. Nor was it mine. But if I focused too much on sadness, the heart rate that was in trouble would worsen, and so I was forced to look one way while Amir looked another.

At nine months, my pregnancy became a topic of conversation.

“You know, he was so sad about the baby,”my mother-in-law told me about my father-in-law. “He was wondering if you were going to name the baby after him.”

She paused for a moment, unsure of my reaction.

A few weeks later, I gave birth to a healthy boy. His name was given at his bris, in the same home that had hosted the same guests a little more than 60 days earlier for the Shiva. Children played in the backyard, their voices cackling through the windows, just as they had two months earlier. A different rabbi spoke about the entryway to life instead of its exit. My mother and mother-in-law stood together as my father held the baby during the ceremony. I spoke about the name we passed on from Amir’s father while Amir helped with the circumcision.

And time stopped, only to be sped up again over the next six months with the renaissance of responsibility, dual childcare, careers, life, dishes, laundry, and diapers. But in that brief moment when the ocean of time seemed navigable, Amir and I held each other, our son, and our daughter, and for the first time in nine months, we were reunited.

* (1) is the author of* (2), *recently published by the Penguin Press, and the novel* (3), *which was published in seven languages. She lives in Los Angeles with her family.*