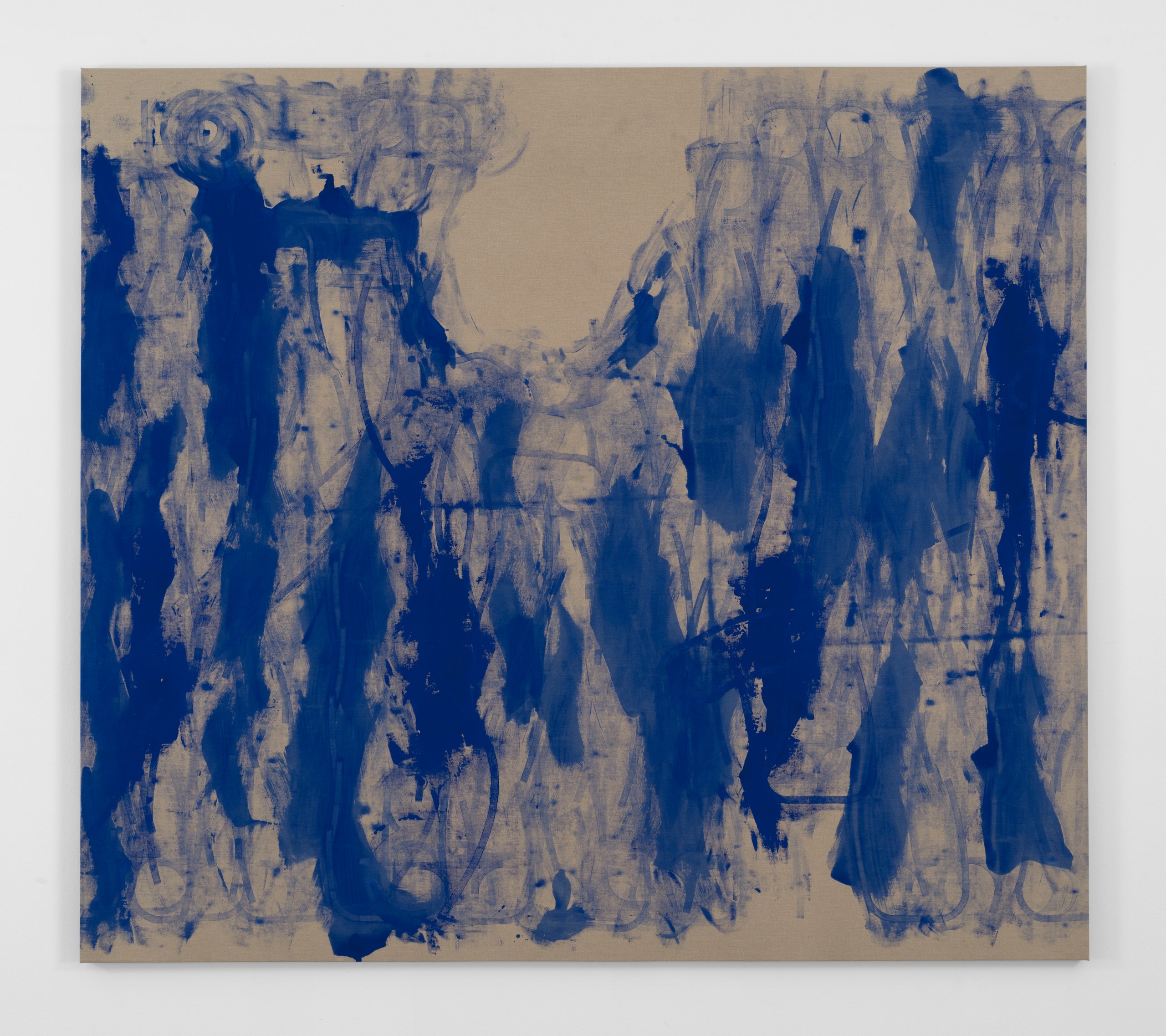 Addie Wagenknecht knows what the void means. By this, I mean she’s an artist who plays with absence and the inheritance we leave behind; her works are clues into the world of technology and feelings that make up her brain, but they aren’t explanations of it. That would be too easy. She builds her art in unconventional ways — hacking sculpture and robotics together to create a traditionally beautiful thing from disturbing means and creating a visually disturbing thing with traditional ones. Wagenknecht’s prior series (1) and (1) used drones and Roombas, respectively. Her work has been featured in the Vienna, Moscow, and Istanbul biennials and acquired by the Whitney Museum of American Art, and she’s collaborated with Chanel and *i-D* magazine on a series exploring the sixth sense. Besides creating art exhibited around the world, she was one of the founding members of the cyberfeminist collective (1), who do work in cybersurveillance, research, coding, hacking, art, and theory. Her latest work, *Alone Together*, on view at Bitforms gallery in New York City is a series of paintings utilizing Yves Klein’s namesake blue, painted using a Roomba as a brush, letting it navigate around her nude body as she reclined on a canvas.

The result is a void in the shape of a woman, painted by a robot learning the algorithm it intuited of her body. In a time where meme-based cryptocurrency is eating up the world’s entire output of energy and Trump has proposed slashing the National Endowment of the Art’s budget out of existence, urgent work discussing where our bodies belong in the future of art and tech has never felt more necessary. After seeing the show in person and missing the chance to talk with her — she was far too popular for me to wade through the bodies, pressed into the small space — we caught up (*how else?*) on Skype, across the world from each other, with three time zones in between.

|||Addie Wagenknecht, *self portrait – loneliness is what we can’tdo for each other,* 2017. Courtesy bitforms gallery, New York. Photo by John Berens.|||

**Arabelle Sicardi:** Can you explain some of the choices of your show at Bitforms gallery? You used a Roomba to create this art with this magnificent Yves Klein blue. This is my favorite shade of blue.

**Addie Wagenknecht:** The blue, or rather how the medium encapsulated the blue, was developed specifically for Yves Klein by a chemist in Paris. He had copyrighted the blue so no one else could use it, but I found the chemist store he used in Paris. They still had the resin they developed as well as the raw pigment for sale. I was fascinated that this blue was a signature of Klein’s practice where he used women as “living paintbrushes.” Women covered themselves in pigment, and their labor would be viewed in front of an audience as spectacle. A lot of these kinds of action painters have historically been white, straight, cis dudes. I was interested in negotiating or redefining something that represents the fact a body doesn’t necessarily have to serve any story but its own.

**AS:** You have a considerable history of addressing gender and the value of bodies, and your work often negotiates the conversation between technology and the art world. Both are pretty sexist fields. How do you deal with the microaggressions in both spaces? Do you consider art a translation for your rage?

**AW:** I definitely use art as an attempt to translate those conflicts, because art is seductive in the way it offers to meet our emotions and vulnerabilities. So much of the work I do is a response to being invisible but struggling to maintain evidence of presence. With AI, there’s this conundrum of it being a promise to optimize your life and make it easier with smartphones, but the downside is we’re always chained to our emails.

**AS:** Your works translate this anxiety — not of technology but of the context that it’s often used for. I want to know more about how you conceptualize beauty and bodies, especially since our ideas of what a human can keep changing because of technology. What’s the relationship between beauty and fear to you?

**AW:** The relationship of beauty and terror is such a duality. It’s very much about the “othering” of bodies in art and society and how it relates directly to consumption — be it within entertainment, military technology, or a domestic space. We’re given this narrative that men in positions of authority are there to protect and serve us but they mostly fail, and there is no neutral ground, not even in cyberspace. When we exist online, this starts to translate to who carries and sells our data and who is watching. Simone Browne talks about how blackness has been at the center of surveillance technologies and practices dating back to the slave trade in *Dark Matters*: “Could there be some potential in going about unknown or unremarkable, and perhaps unbothered, where CCTV, cameraenabled devices, facial recognition, and other computer vision technologies are in use?”

So often being a woman or “other” — cis, queer or trans, bi, a person of color — is simply about having the right to be visible, having a right to exist in a space. The implications of that visibility mean always knowing the context: where your body is, how it is presented, and who is looking at it and who is following you, wanted and unwanted. There is a balance of visibility and fear. How do we translate this into something beautiful or translate it to something at all? Maybe this is where the art comes in. Sometimes the most successful way to translate an experience isn’t to yell or shout or scream into their gilded towers but to translate it into something so beautiful that they have to look at every day.

**AS:** You didn’t start off as an “artist”; you went to school for computer science and interactive telecommunication. When did you make the change — or rather, open up your practice in tech to do the stuff that you do now?

**AW:** I’ve always struggled with the notion of what being an artist even means. It was only in the last year that I feel like I could call myself an artist because I never thought it was a viable career. As a kid, I remember seeing the Guerrilla Girls in the early ’90s. I was like, *What’s going on? There’s this group of women who are anonymous and have a place of powerful engagement within the discussion of the art world! I remember thinking, This isn’t something that I can get into, because when 90 percent of the art world is guys and 2 percent are women, what are my chances, specifically? The odds will always be stacked against us, so who wants to be part of that?* Once I did accept my path anyway, it became, *Why did I get here, and not all these other people?* Impostor syndrome got to me.

A few weeks ago, the Whitney had an exhibition up about feminists, and I walked in and there were the same Guerrilla Girl posters I had printed out and put in my bedroom as a teen. It was discouraging to see how little has changed since those were made 25 years ago. And it is frustrating now to be part of the system and having to identify as part of that system. Being uncomfortable with it but also depending on it is such a weird place to be in.

**AS:** I deeply relate. I feel the same way about writing. We have to engage with other people in these systems to survive. We still need to figure out better ways of changing what final editorial control means, who has it, how we can engage with it when we’re creating work, and what it does to our work at the end of the day.

**AW:** Now I have been making a body of work, and everyone wants to see video documentation of it, when the whole point of the body of work is about not being a performance. Not *being a being* on display. And yet everyone I showed it to was like, “Where’s the video? I want to see you nude, on the canvas.”

There’s this experience of always knowing your body is entertainment to other people. That’s part of why I wanted to make this exhibition. The #MeToo movement was just getting started, and there was a lot of pressure to out our experiences of sexual abuse, but my abuse isn’t available for clickbait. Part of this exhibition is to respond to women being used for men’s advancement, and it’s also about being physically absent.

**AS:** You have your work and the Deep Lab community you put together of women in surveillance, technology, and art, and yet you still get impostor syndrome. What do you think would need to happen to you to feel like an artist? What would feel like enough?

**AW:** I do think about it all the time. I think nothing would be enough? I think a lot to things I’ve done, like Deep Lab, is to make sure there’s something for the next generation, to be a manifestation of something they can identify with. Deep Lab is a collective of research on gender, security, art, and technology, and it started because I saw a void of women in opsec and surveillance culture. I wanted to create a trajectory for women in that space who were already doing interesting and amazing things but elevate that work in a way that we couldn’t do separately. So we thought about problems that were unique to us and tried to bring that into discussion in the larger community. There’s a lot of overlapping interests, like projects on domestic violence and helping LGBTQ communities in the Middle East be safe — they all tie into a larger thing in the end. Violence can happen in a million different ways.

And if you are awake and alive, you are constantly absorbing everything around you. So much of my work is a response and rejection of the things I witness and experience. I want to encapsulate it in a way that I think is easier for people to understand and redeem.

*Arabelle Sicardi is a queer beauty writer interested in the intersection between beauty and power. They’ve written for* Teen Vogue, Allure, Elle, i-D, Shondaland, Hazlitt, *and more. You can find them on (1) and see their other work (1).*