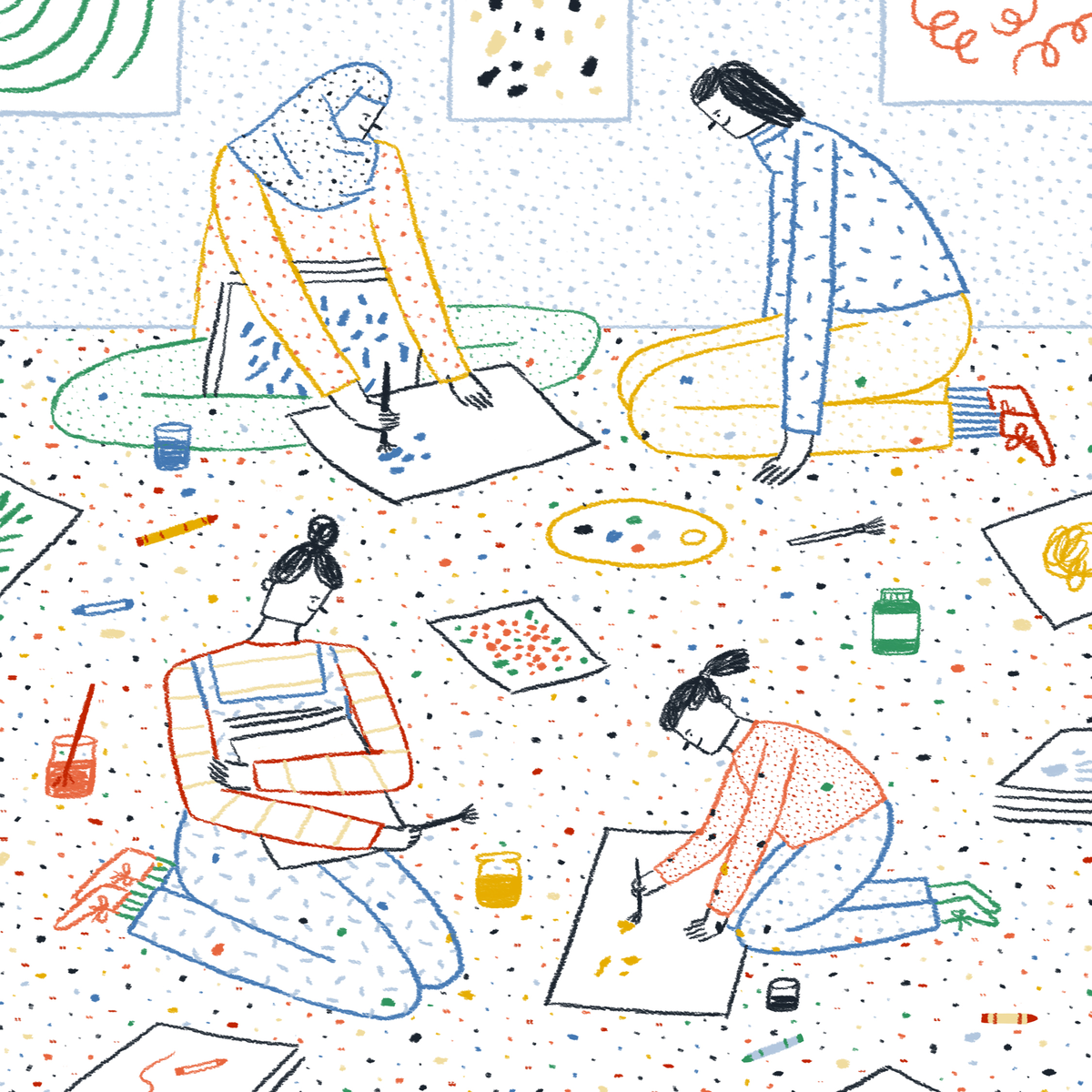 ​Megan had the idea to volunteer at a refugee camp on the island of Lesvos, in Greece. She had experience working with vulnerable youth in New York but wanted to get involved with global issues as well. We felt a connection to Greece because Claire had family there. Lesvos, closer to the Turkish mainland than to the rest of Greece, was increasingly a landing point for refugees from war-torn parts of the (1), who hoped to find a better, safer life in Europe. In 2015 alone, more than one million people made the journey by way of Turkey, often smuggled on small, overcrowded dinghies and even given fake life jackets. There have been more than 2,500 drownings just this year.

Neither of us had any experience in humanitarian work, but we felt a pull to go and help. We researched, joining (2) and emailing former and current aid workers, and ultimately connected with (3), a Swedish organization recently formed in response to the influx of refugees. We paid for our travel ourselves but put together a (4) to buy medical supplies, toys, and books for the camp. And then, we were off.

> Neither of us had any experience in humanitarian work, but we felt a pull to go and help. ​

After arriving in Lesvos we waited for our ride to the camp under dense silver clouds. The water was deceptively calm, and we could see Turkey, just a stone’s throw across the Aegean Sea. Ten minutes later we arrived at Moria, the main registration camp. Moria housed the majority of refugees on the island while they applied for asylum and waited in hopes that (5) would reopen and they could continue through Europe to their desired countries

An old military base according to some and a defunct prison by others, Moria stood upon a dusty hill in the southeastern part of the island. We had prepared ourselves for a prison-like environment, with barbed-wires, sterile housing units, and police everywhere. Once we got there, most of that seemed to be true, but the various volunteers were working hard to create warmth. They were a motley crew of people: a professional midwife from Scotland, a nurse from Canada, three Arabic-speaking students from the States on their college spring break. Everyone was there for a different reason but with the same intention in mind: to help.

Our days and nights at the camp were long and physically and emotionally draining. We dealt with things like a dental emergency that left a middle-aged man crying in pain, finding medical help for a young woman with a sick baby, and getting warm clothes to people whose bodies were often still soaked from their trip. Some days ran smoothly, and on others we felt like we were chasing order and calm, just out of reach.

Moria was crowded, with barracks built for 12 holding up to 50 people sleeping on floor mats and making family forts with wooden pallets and piles of blankets. Those in the barracks were lucky — others were in tents, sleeping on gravel. Every morning the individuals and families had to pack up all their belongings and leave the camp so that the spaces could be cleaned to prevent outbreaks of everything from the flu to scabies. Upon return, they would be assigned a new room. People couldn’t get even mildly comfortable or settled. We hated explaining (in definitely confusing gestures) to a family with four children and elderly grandparents that they must sit for hours in the hot sun on a concrete-paved hill until the camp was ready for them again. They would line up, trying to create shade with their blankets, using their bags as pillows. We constantly asked ourselves if we were somehow stripping people more of their dignities in an attempt to make things better for them.

But there were moments of humanity. Every afternoon, when families returned to the compound, we had time for soccer, art, balloons, bubbles, jump-roping, and hanging out — a necessity for all of us. The kids were smart, affectionate, goofy, and kind. Their artwork was original and moving. Alongside the usual pictures of families, mountains, and rivers there were also images of boats overstuffed with people, with drowning bodies below in the water. We became the resident art installers, the kids proudly presenting us with their work and giggling as we struggled to tape it up as fast as they produced it. The barbed-wire fence and walls of the compound turned into a vibrant gallery. The children, feeling more and more at home, marked out their play areas, waltzed into the office for latex gloves to use as balloons, and formed new friendships while they made art around the picnic tables.

We started to think of small ways to transform the compound into a more livable space. Mahmood, one of the teenage residents, whose drawing style was cartoony, curious, and dreamy, would create a mural.​ A local café owner found us a light-maker, who, amused by our very specific and unwavering globe-light fixation, made custom stringers.

> We started to think of small ways to transform the compound into a more livable space. ​

From there, we decided to create a garden. We ordered large wooden planters, metal containers, and gardening materials from the local plant store. With generous donations from friends and family, as well as funds we had allocated for the trip, we bought more than 100 plants, from local varieties of fragrant herbs and flowering trees to vines and lemon plants. When we brought the first small load to camp, the kids and even the casually indifferent teenagers jumped in to help us place everything and pot up some planters. The families were smelling, eating, and touching the herbs while teaching us the names in Arabic and Farsi. They were excited to spice up the bland camp food and make tea like they used to at home. A palpable sense of lightness filled the air. Finally, at the end of the day, with plants coloring the bleak ground, we put up the lights. Everyone cheered as the small globes lit the darkening sky.

Then everything went to shit.

The next day, armed with the last heavy load of soil and plants, we arrived at camp, ready to see our little vision really come to life. Instead, soon after unpacking our stuff, we were informed that as a result of the recent (6), the camp had been essentially turned into a detention center. Any new arrivals on the island (7). There had been rumors of what this agreement would mean for the camp and the island, but no one, not even the higher-ups, had thought anything would happen immediately. We were all very wrong. Most people that had been staying at Moria up until that time were removed overnight, forced to buy their own ferry tickets taking them to unofficial government camps along the mainland. Lighthouse and the other NGOs who had worked tirelessly to make Moria a more humane place were also being forced out of the camp.

We searched for any remaining people we knew to say goodbye. We were as in the dark as they were, and our garden suddenly seemed so futile. What good could some plants do if people could be moved like cattle at the hand of tone-deaf international policies?

But we were determined that some good should come from the project. We found a home for the garden at Kara Tepe, a nearby camp newly dedicated to vulnerable cases. Run by the municipality, free from the control of higher government authorities, we were assured that Kara Tepe wouldn’t suffer the same fate as Moria. With the help of four Syrian men staying there, who had an unmatched ability to Facebook, smoke cigarettes, and repot plants all at the same time, we installed the small garden. All together we potted, watered, took photos, and admired our little survivors. It was the best we could do. The rest of the volunteers from Lighthouse were moving on to work at other camps. Our time on Lesvos was over.

> The rest of the volunteers from Lighthouse were moving on to work at other camps. Our time on Lesvos was over.​

We were only in Greece a short time, helping for just a moment in what would be a long, weary journey for so many people. Now that we are home, we do what we can to stay connected: communicating with the people we met, contacting embassies for help, (8). A few months after our trip, Megan returned to mainland Greece to work at a newly formed camp. She witnessed a prevailing sense of defeat as people realized their stay in tents could be indefinite.

At the time of writing this, a family of four, with two young children, has just drowned trying to reach Lesvos. We see hospitals, streets, entire cities being bombed out in Syria. A generation of children is being denied the opportunities of education, the safety of a home. Millions struggle to survive and protect their families as a world of people turn their backs on them.​

_Claire Typaldos is an artist and designer currently living in Philadelphia. She has more than 60 plants in her apartment. Megan Kelly lives and works in Minneapolis with her boyfriend and puppy, a perfect pug-pit-terrier-tiger-boxer mix._