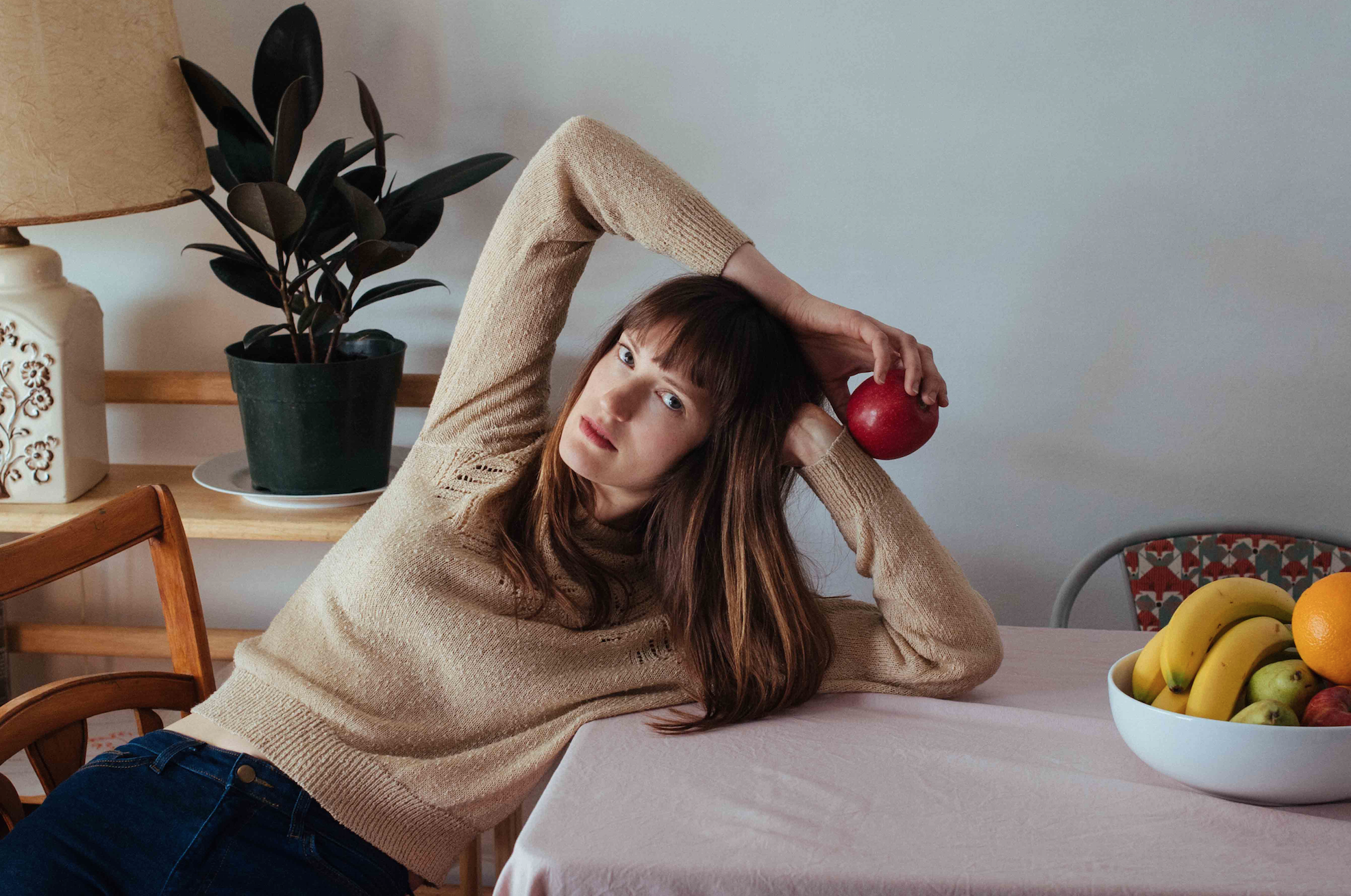 One of the growing pains of making your first solo album after nearly fifteen years in a band, according to Annie Hart, is adjusting to being alone onstage. With the Brooklyn-based electronic pop band Au Revoir Simone (for which Hart is a vocalist, keyboardist, and bassist since the band’s formation in 2003) on an amiable pause, Hart had to find new ways to get comfortable with her audience. She says she realized “there’s something really interesting about seeing how people relate together. Especially in song, when they’re in the act of creating art as a unit, it allows the audience to feel more like they’re a part of it than if it’s just one person alone.”

Hart missed the dynamic of having performers onstage with her and quickly invited drummers and bassists to join her on tour. She also created a stage uniform out of a black unitard (“That nonentity of an outfit is so me,”) which she wears in the Lenny-exclusive premiere of her new video, “I Don’t Want Your Love,” the latest single from her debut solo album, *Impossible Accomplice*. In the video, Hart is dancing and rolling around the streets of Brooklyn, where she lives with her husband and two children. The song is about coming into her own, looking back on an old relationship, and having a realization: “I don’t need that judgment, that cheating on me. It’s so nakedly me, and I’m happy with who I am.”

These days, Hart has established a routine that revolves around raising her kids, touring, and making new music. *Impossible Accomplice* –– an album of eight elegant synth-pop tracks chronicling her growth into womanhood –– came out in September, and Hart has already taken the album on the road to both U.S. coasts and parts of Europe. This past summer, along with the rest of Au Revoir Simone, Hart was in David Lynch’s *Twin Peaks* revival, playing out episodes four and nine with their songs ” (1)” and ” (2).”

Over the phone, we chatted about her solo career, the band’s future, and some of her favorite women in electronic music.

__Thora Siemsen:__ What was the process for selecting these eight songs on *Impossible Accomplice*?

__Annie Hart:__ It actually took me a really long time to write this album. I started it about three years ago. I was pregnant at the time with my daughter, my second child. I thought, *OK, I have to finish this before I have the baby, or it’s never going to get done*. I worked on it as much as possible. Then, we moved. Between two small kids, renovating the house, and then trying to be creative, it was just so slow.

__TS:__ Many of the songs on *Impossible Accomplice* are about heartbreak. Did your outlook on the experiences change while you were writing the album?

__AH:__ When I was writing this album, I was going through a pretty big personal transition. I definitely kind of judged that younger person, that younger self. I would always think, *Why was I so stupid? How come I was with that guy? What was wrong with me? How come I couldn’t see that they were creepy, or weird, or using me? Or, Why did I take their verbal abuse? Why would I do that?*

It was at the same time that I was writing the songs that I realized: That was just a young woman. What did she know? She was just experiencing love. She didn’t have the perspective that I have now. I really came into this place of strong forgiveness for her, and also understanding. It totally changed my perspective on who I am now. So many people go through crazy, fucked-up experiences. I wasn’t alone, and I wasn’t weird, and I wasn’t strange. I felt so comfortable just knowing that.

__TS:__ A friend of mine recently sent me the book * (3)*, in which author Tara Rodgers writes, “Electronic music cultures overall seemed to discourage or deny women’s participation. This was made clear by the lack of substantive coverage of women in electronic music magazines and history books.” Who are some women you’d want to see recognized better in this conversation?

__AH:__ It’s funny, because we just started up with synthesizers because that’s what we had. That was the concept of the band. We weren’t paying homage to any groups, like Kraftwerk or Brian Eno. I got into those bands later –– and even New Order, you could say, is a synth band, or OMG –– but those are all men.

After I got into those bands, other people would say, “Oh, you’re into synthesizers. You should really check out Delia Derbyshire.” She wrote the *Doctor Who* theme. She was one of the people who started inventing synthesizers over at the BBC Radiophonic Workshop, in a group of men. She was really cool, and she definitely is one of the most famous of the proto-synth women. My favorite woman –– who I can’t get enough of –– is Laurie Spiegel. She composed mostly in the ’70s and ’80s, and she has this amazing album called *The Expanding Universe*. I’ve listened to that album probably 200 times, and I only found out about it last year. I want everybody in the world to listen to her. Also, Suzanne Ciani is really good. They work together as well. Suzanne Ciani has vocals in her stuff. Maybe it’s a little more accessible, but if you’re into just synthesizer sound, you have to hear *The Expanding Universe*.

__TS:__ The *Twin Peaks* appearance made fans wonder about the future of Au Revoir Simone, which you’ve (4) as being “on a long, pregnant pause,” and is reflective of a longstanding mutual appreciation between the band and David Lynch. What are some other occasions that would get the band to play together?

__AH:__ We were invited to do a soundtrack for a film recently, and we definitely said yes, but it’s a film, so who knows what the timeline is or what’s happening. We’re very open to soundtrack work, and we haven’t had a talk about it in a while, but I’m sure if somebody was like, “Here’s a million dollars, could you play a festival?,” we would do it. We accept all offers.

*Thora Siemsen is a New York–based writer and contributing editor. She has written for* *Lit Hub*, OUT, Rolling Stone, Rookie, *the Rumpus,* *and* *the Creative Independent.* *Find more work (5)*