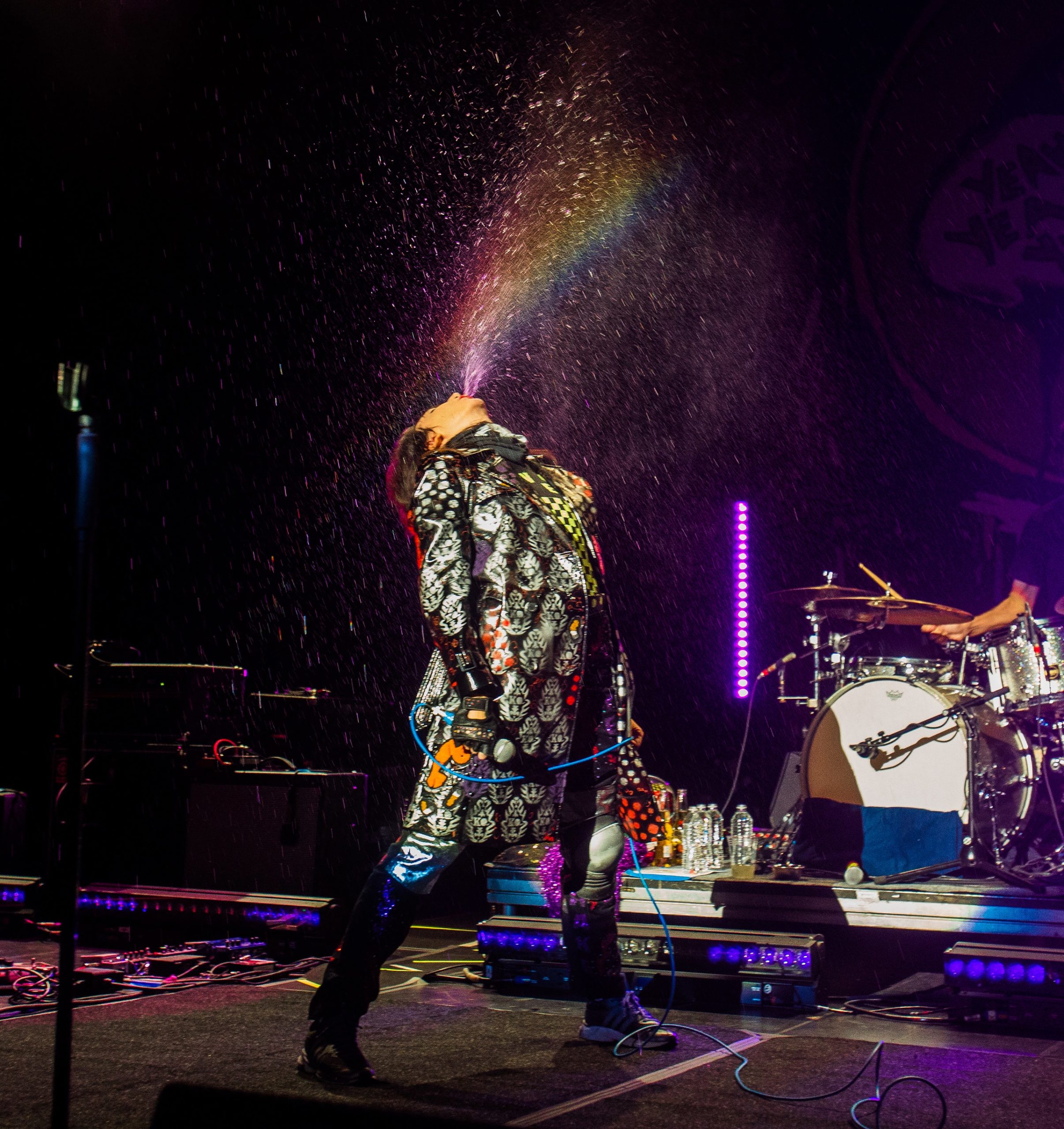 Karen O tells me she’s shy 363 days of the year, despite her famously raucous stage presence. Her voice is tender, even tranquil, and she giggles between thoughts. She thanks me for being flexible with my time, which is surreal because I’ve had posters of her on my wall (both literal and on Facebook) since I was fourteen.

In September 2000 — the year Von Dutch trucker hats and the Red Hot Chili Peppers were both ascending in popularity — an unknown band opened for the White Stripes at New York City’s Mercury Lounge. The trio of punk twentysomethings — now known as Yeah Yeah Yeahs — was fronted by a foggy, greasy-looking woman; she (2) black duct-tape hearts over her nipples under a white wife-beater, and she oozed with anarchy. Earlier that night, she had covered herself in olive oil. In her own words, she wanted to look sweaty and glistening.

“It was my chance to be completely free,” says Karen O. “I had some funny ideas about what a rock star should look like, and the top of that list was sweat — it was about being free and being strong.”

It’s been almost two decades since Karen O, the woman fronting punk rock’s greatest experiment in bass-less EPs and garage-blazing irony erupted in the music industry. Today, the band’s legacy includes four best-selling albums, a cult-like fan following, and probably a dozen remixes to their 2009 single “Heads Will Roll.” And it is far from over for them.

I spoke to Karen the morning of Yeah Yeah Yeahs’ first show in New York in four years. A part of their revival tour for the reissue of *Fever to Tell*, (3) saw all of the microphone blow jobs, shagged head-banging, and grape-spitting stage play that is synonymous with their front woman.

And in that regard Yeah Yeah Yeahs were especially distinguished — the audacity of being led by a woman set the band apart. In a genre monopolized by men, Karen O was, and still is, atypical. She built a career knowing what kind of patriarchy she was up against and decidedly ignored it. And her successors certainly took that paved road, too — artists like M.I.A., Kesha, Hayley Williams, and Sleigh Bells all apply the same visceral defiance to their work.

“I just wanted to break it all open,” she says, reminiscing about her early performance days. “I wanted to shine bright and be that voice for a lot of women. I wanted to descend on the scene and jar people out of complacency. I wanted to fuck shit up.”

Karen never deemed herself a feminist, either. She gets that question often, though — *Are you a feminist?* In (1) with *Elle* earlier this year, she said: “The work speaks for itself. I just want it to really be in the work rather than the talk.”

Though her legacy as a provocateur is well established, Karen’s beginnings were that of a shy teenage outcast. It was in her early twenties that she discovered English singer PJ Harvey’s *4-Track Demos*. Harvey’s mild-mannered demeanor coupled with her unabashed artistry and stage presence left a deep impression on Karen’s own persona. Harvey’s self-produced album of demos defending female sexuality, reveling in aspirations and raw fantasy, is certainly mirrored in Karen O’s own anthology.

“It’s that freedom — like getting free,” Karen says of Harvey. “It gave me the courage to do that myself.”

For every trend, Karen did the opposite, and she reveled in her own craft — writing an album of breakup-inspired hits for the band’s debut studio album, *Fever to Tell*, and the 2013 Oscar-nominated ballad “The Moon Song.” She’s gotten her iconic shag cut from the same New York hair stylist for over a decade, and she trademarked her onstage glitter masks and futuristic feather capes. Her originality is perhaps her greatest freedom from what she calls the American “like” culture.

” care way too much about being ‘liked,'” she says. “It wasn’t easy, but I stuck to my guns — I had to rebuild how I thought about myself being in an all-dudes rock world. Trying to be heard in that context was tough, and I had to scream and break things to make people listen to me, but they did. They listened.”

As she celebrates her years of work, overcoming years of angsts and heartbreaks with the band, Karen’s solo creative plans are brewing close behind. The 38-year-old musician has spent a considerable amount of time developing a musical, and she’s collaborating with producers and friends on her own record, which she hopes to release next year. Her unspoken promise to fans is that she will keep creating for them, and that extends past just rock music.

“Just fucking make stuff — that’s really important,” she says. “The best stuff that I’ve ever made as an artist is when I’m not thinking about the ‘like.’ Authenticity is your own voice, and you have to cultivate it, even if that means in a bit of a bubble.”

Even in the years of Yeah Yeah Yeahs’ most considerable success, Karen O had trouble understanding it. In 2009, by which time their discography was replete with popular singles like “Maps” and “Zero” and after almost a decade of critical acclaim over visual albums, EPs, and risqué performances, she still hadn’t grasped the force of their weight. It wasn’t until later that year in Chicago’s Grant Park at Lollapalooza that she fully realized it. The band was asked to step in as a last-minute headliner after the late Beastie Boys vocalist MCA’s throat cancer had advanced. Nearly 30,000 fans faced the stage as the group ascended to a stream of camera flashes. She wasn’t sure how they would react — this stage hadn’t been originally intended for her and her band, and the group had never headlined a show before. But the moment Karen O walked out, the crowd erupted.

“It was emotional — it was one of those moments where you work toward something but never anticipate where it will end,” she says. “As a female-fronted rock band, I felt pretty fucking powerful.”

*Leora Yashari is a writer (mostly) living in New York. Her work can also be found in* Teen Vogue, Vanity Fair, Nylon, *and other publications.*