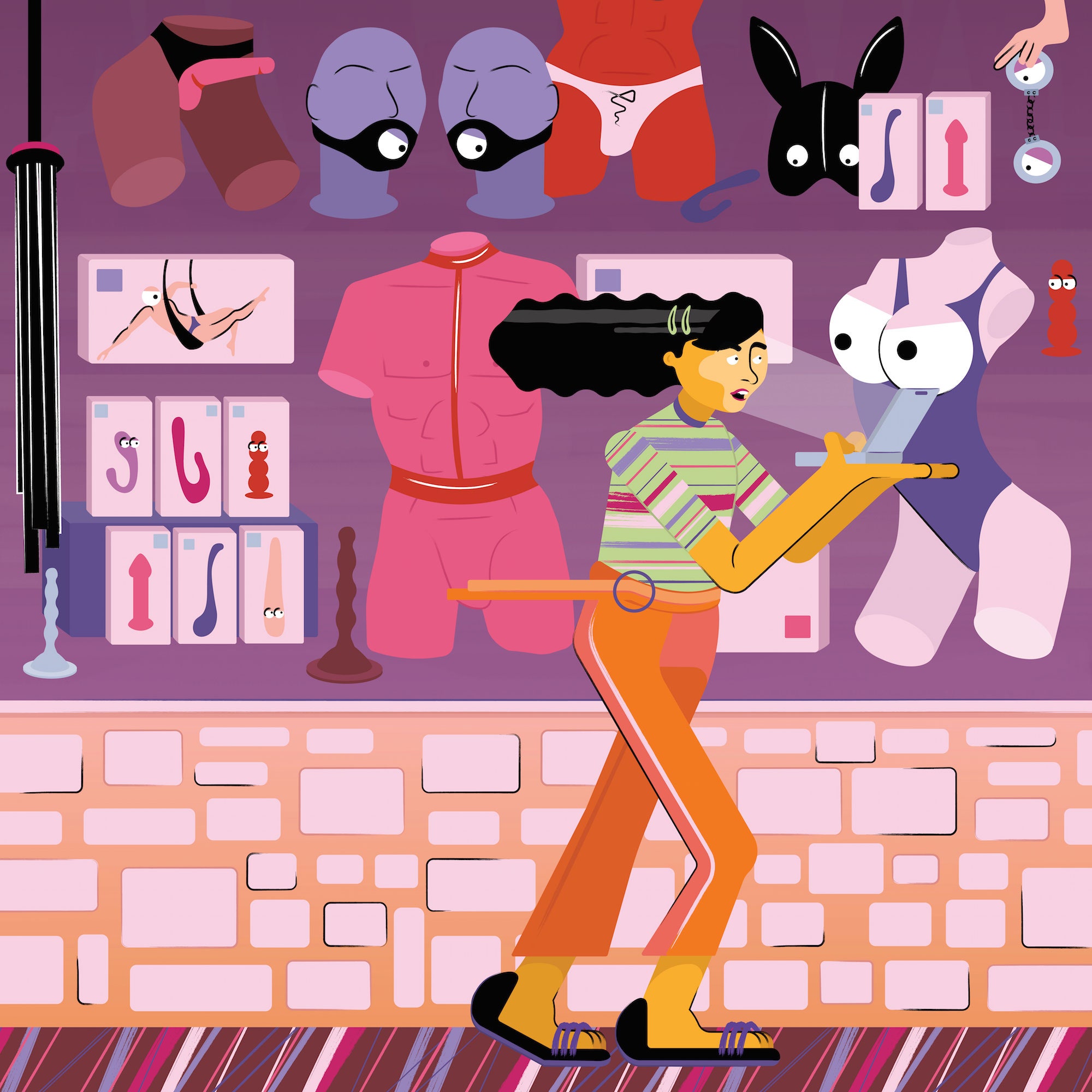 When I was ten years old, my parents announced that we’d be moving from Washington, D.C., to Frankfurt, Germany. To soften the blow, they took my brother and me to our favorite Italian restaurant, where we wept fat tears into our plates of gnocchi. “I just wish you’d given me some warning before deciding to ruin my life is *all*,” I hissed, before blowing my nose on a white-and-red-checkered tablecloth.

My parents tried their best. I was allowed to call friends from home, but the time difference (plus the continental drift of cliques that inevitably occurs along adolescent fault lines) meant I was often left with a dial tone. So I was forced to immerse myself in Germany, which seemed (to my young American eyes) to be impossibly fucking weird. There were good changes — we got cell phones (boxy little Nokias), in case we got marooned by the public transportation we’d now have to take. But we couldn’t buy peanut butter, only a chalky substitute called Erdnusscreme located in the “American” section of the grocery store, along with dusty cans of salsa and radium-yellow popcorn. Milk lived on the shelf, not in the fridge, and purple candy wasn’t grape-flavored but black currant — a strong, bloody taste I never got used to.

In the arrivals area of the Frankfurt international airport was a red-and-white-marqueed shop called Beate Uhse. Backlit photos of women with overlined lips and arched backs met our jet-lagged eyes as we stepped into our new country for the first time. I fumbled for my Game Boy so I wouldn’t be caught staring at mannequins with breasts as big as my head who modeled crotchless lingerie and strap-on dildos. Ironically, it was the only location in the airport where you couldn’t smoke (another unexpected German quirk, as we’d been warned they were all health freaks), and so my brother and I — with our pink, soft, American lungs — ducked through the omnipresent clouds of cigarette smoke and sought refuge under the looming nipples and hooded eyes of Beate Uhse.

Sex was everywhere in Germany, and I was obsessed. I was horrified, fascinated, pinned to the wall. In the local newspaper’s TV guide — without even seeking it out! — you could see people locked in erotic couplings, advertising that evening’s after-hours entertainment. Huge, pepperoni-size nipples shared column space with advertisements for *SpongeBob Schwammkopf* and an eight-part series on the coal canals of Bremen. After 8 p.m., German television was a softcore sex buffet. I was particularly fond of *Série rose*, which featured chambermaids spying on louche bathing gentlemen, or bi-curious nuns discovering eye-opening uses for rosary beads. I decided it had educational value because most of the fucking took place by candlelight or in libraries.

Driving to church took us right through the heart of Frankfurt’s red-light district, where oversized neon vulvae fluttered open and closed, like butterflies, in the windows of every *erotikshop*. Even at our local stationery store, a simple carousel rack of postcards carried the most exquisite tortures: snuggled between a cartoon of a defecating sheep and a “Frankfurt bei Nacht” skyline, one could find a veritable Whitman’s Sampler of dicks. Real penises, photographed wearing sunglasses, donning propeller beanies, or with googly eyes adhered to the balls, so that they resembled floppy pink Muppets created for the amusement of Catherine the Great. The Germans around me couldn’t care less. The male sex organ was no big deal, worthy only of a 99-cent postcard and a quick chuckle. In Germany, sex was like food or sleep or going to the toilet. It was an ordinary biological function. That’s not to say it was ignored or unimportant — the option to be a freak was there if you wanted it, but most people just went about their business. In America, the topic of sex was a surefire, universal panic button; in Germany, it was as ordinary as currywurst.

I possessed no such chill. This onslaught of sexual paraphernalia collided head-on with my adolescence, and the effect was like feeding a bunch of PMSing gremlins after midnight. I didn’t walk, I throbbed. I stopped shaking people’s hands because my palms were too sweaty. It seemed like there was a Beate Uhse store on every corner, reminding me constantly of sex. Even the name, Beate Uhse, had a cardiovascular cadence that mirrored how the blood thumped in my ears every time I walked by one, trying not to expose my deviant heart with telltale glances. *Beh-ah-teh Uh-seh. Be-ah-teh Uh-seh.* There wasn’t even any secret pervert’s joy in my actions — I just felt tired, attempting to drink in every erotic angle of German life while knowing it was impossible, there was too much. Everything was sexual, subsumed by the beat of Beate Uhse. Even regular stuff got me wired. I’d watch the local U-Bahn train I took to school roar through a tunnel and sigh, reluctantly repositioning the seam of my jeans over my crotch. I didn’t have time for this!

Like any addict, I kept up appearances. I’d prop a copy of *Ella Enchanted* theatrically in front of my nose, so nobody would notice my eyeballs pop as we passed a Bang und Olufsen store with dozens of display televisions beaming dozens of muscular male asses down the Königstein high street.

I was only caught once, on a family holiday to Hamburg when I was thirteen. There were the normal softcore offerings on TV that night, but by that time I was glutted on two years of German venality; I had the jaded palate of Caligula. I decided that I needed more. My underpants were wet as I shakily entered my room number into the television remote to unscramble the scrambled channels, the ones where you could watch actual hardcore pornography. I’d never done this before, but I knew I was ready. My breath was short. I couldn’t wait.

The screen was suddenly filled with shiny planes of pink and red. I realized after a few confused seconds that I was watching a penis enter a vagina. This was not a soft, funny penis from the postcard store. This thing looked like a police baton, roped with veins that bulged like the ones in my grandmother’s hands. The vagina’s hair was close-cropped and spiky — it reminded me of my favorite Sid Vicious poster. The man, who wore a lavender shirt and had a comb behind his ear, was jabbing himself into the woman, who was perched on a barber’s sink. (Mentally, I made a note that I would be trimming my own bangs from now on.) The actor paused and his face crumpled. Then something — it looked like conditioner — flew from the tip of his dick onto the woman’s stomach. I’d never seen semen before.

And I hadn’t even come. What a rip-off.

Just recently, I Googled Beate Uhse, convinced (still) that it was a word or phrase indicating endless erotic possibility. I was stunned to learn that Beate Uhse was actually a woman and former stunt pilot. She was disappointed with the quality of sexual education offered to both German children and adults, and in 1962 opened a store for “marital hygiene” — what is now regarded as the world’s first sex shop. It was a relief to learn that it wasn’t my fevered adolescent memories that placed a Beate Uhse store on every corner — at the time, in 2003, it was the largest distributor of adult products in the world, with over 30 shops in Germany alone. Uhse’s efforts were in large part responsible for the Germans’ laissez-faire attitude toward sex, which so baffled me at first. But the company’s fallen on hard times, thanks to the Internet, and in 2017 it filed for bankruptcy. The store that first welcomed us with open legs in the Frankfurt airport is now closed forever. It’s been replaced by a yoga room.

Objectively, I know the erosion of distance between countries can be a good thing. But I still mourn the gulf. Being pushed into the deep end of the cultural immersion pool forced me to swim with a bravery and cunning I did not know I possessed. There’s a lot to be said for being prepared for change, but also something to be said for being smacked with difference. It teaches you who you are. When confronted with the truly bizarre and foreign, we can freeze up and shut down. We can shake our heads, lock our lips, and refuse to take a bite of something new. Or we can sigh, unzip our Limited Too jeans, slide a hand between our legs, and engage in some true assimilation.

*Liz Watson is a writer and producer who lives in New York.*