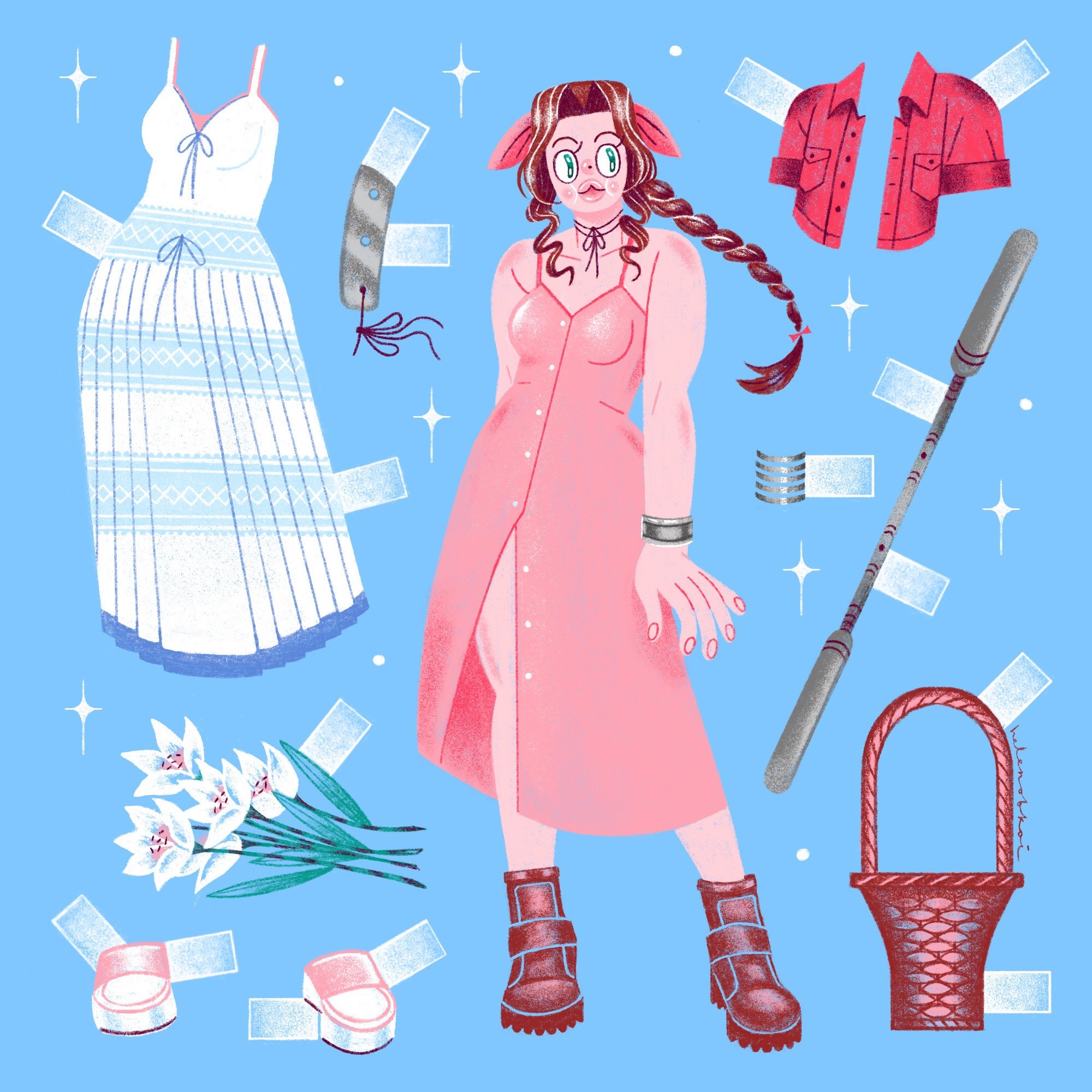 The 1990s and its icons don’t seem to show any sign of abating from our wardrobes. It’s like we’ve almost hit a point of exhaustion from the usual suspects: How many times can we reference Cher Horowitz’s checkered ensembles, Rachel Green’s underrated minimalism, or Carrie Bradshaw’s pre-haute-couture combos before officially moving to the early 2000s? Well, in 2018, fashion is taking cues from Square Enix’s 1997 dystopian video game Final Fantasy VII and its female protagonist, Aerith.

In Final Fantasy, Aerith is a flower seller from the slums of the industrial metropolis Midgar who is the last descendant of a mythical lineage that can directly communicate with the Planet, healing and cultivating it instead of plundering its resources. For the majority of her in-game screen time, she wears a pink button-front dress with a sweetheart neckline, chunky boots, a scrunchie-like ribbon fastening her braid, a choker made of a thin, black ribbon, and, lest we forget, a wicker-basket bag.

I started noticing similar dresses late last summer, when I stumbled upon (11) in Urban Outfitters, which came in a peachy hue. Nearly a year later, these dresses have become the darlings of so-called “cool girl” brands. Reformation had (8), Madewell had (12) in a saturated petal-pink, and Mara Hoffman had the mauve (9). The list goes on indefinitely, and expands to hues other than pink. Celebrities like (3) and (15) are fond of similar styles. Aerith herself, were it not for her late-’90s curtain bangs, might as well be the poster girl for Reformation, with its de-frumpified vintage aesthetic that combines retro silhouettes with minimalism.

Fashion and the Final Fantasy series have (16): in early 2016, (4) used pink-haired Lightning, from Final Fantasy XIII, as its digital spokesperson, while the following fall, Lunafreya from Final Fantasy XV had her in-game wedding dress (5). In the case of Aerith, the reverse happened: thanks to its flattering and utilitarian look, a character’s in-game uniform became mainstream.

“It’s notable that Aerith isn’t dressed in the same type of clothes we usually see female video-game characters wearing,” fashion historian Lauren Boumaroun tells me, referring to the fraught territory at the intersection of video games and female representation. “On the one hand, there are a lot of female gamers who feel empowered when playing, and some awesome female avatars within the games. On the other hand, the female characters are often hypersexualized, with unrealistic body proportions and revealing clothing that’s impractical for fighting.”

Aerith is a great exception on several fronts. Unlike the majority of female characters, her body type is not overtly sexualized, nor does it have unrealistic proportions. Her outfit is feminine but practical, as, in the game, she is both a dignified demigod and can summon a spell so powerful, it’s able to stop the planet’s destruction. What’s more unlikely? Many female characters fall into the saint–femme fatale–tomboy child triad, but Aerith’s personality mixes strength with goofiness: she claps back at her captors with sarcasm; she coaxes sullen male protagonist Cloud into a cross-dressing scheme and bluntly asks him on a date. “A DA-TE, or haven’t you ever gone on one? No? Just a mixed-up kid!” she says once she detects his social ineptitude.

From a strict fashion-historic perspective, it makes sense for Aerith’s dress to be popular right now. For one, our interest in the ’90s has almost reached a point of saturation. “I can’t help but think that since the character was introduced in 1997, her look is likely inspired by grunge fashion,” Boumaroun says. “It makes sense that Aerith’s look would be considered ‘cool’ right now.”

Similar dress styles can be traced even farther back in time. “The first thing I notice about those dresses is how they look similar to the sundresses popular in the early 1980s,” says NYU professor and fashion historian Nancy B. Deihl. Specifically, she referred to the late ’70s and early ’80s styles of (1) and (2), noting that these designers used gathered skirts, longer hemlines, and an emphasis on front buttons, borrowing elements from 1950s fashions. While this style was considered preppy and upscale at the time, with Laura Ashley dresses retailing for hundreds of dollars, the sleeker, more form-fitting versions introduced in the ’90s went on to make the style more accessible and mainstream. And our current predilection for midi dresses, nostalgia aside, is a nod to the “modest” aesthetic, which privileges clothes that are both practical and ladylike.

Yet in the cosplay community, Aerith’s dress is hardly a nostalgia-fueled novelty. The character was very popular from the beginning for practical reasons: compared to outfits that require crafting breastplates and manually attaching beads and sequins, which can take months of work, the pattern for dresses like Aerith’s (6). What’s more, it is one of the few cosplays suitable for everyday wear.

Twenty-year-old Leah DeBerry tells me she’s actually worn her hand-sewn Aerith costume outside of cosplay events, as the fit is ideal and flattering. “A character like Aerith, who has a very natural and modern look, can blend in without much more than a double take from people in a Walmart,” says DeBerry.

Both DeBerry and fellow cosplayer Arielle Somberg, who works at Anthropologie as a visual-merchandising manager, love seeing this style in stores. Not only is it flattering and versatile, it’s a boon for less experienced cosplayers. “It’s helping a lot of people have easier access to cosplaying without having to sew from scratch,” says Somberg, noting that the late-’90s fashions of Final Fantasy VII — such as the Kendall Jenner–esque miniskirt, suspenders, and crop-top combo of female co-protagonist (13), and even the sleeveless turtleneck and harem pants worn by male lead (7) — are still popular because they can be re-created without superior tailoring skills. “That’s how a lot of us learned from the beginning — using store-bought items and altering them.”

Ultimately, however, Aerith is a fitting inspiration for 2018, even beyond the realm of fashion. After all, while I doubt that brands like Reformation and Madewell intentionally crafted designs influenced by her character, she embodies our Zeitgeist with her quiet resistance to the dystopian universe she lives in. She is a strong female character who tries to create beauty in an ugly world by growing flowers in a metropolis polluted by industrial waste (no real-life parallels necessary on this front). In her selfless pursuit of the Planet’s salvation, she is the tragic heroine of a great dystopian narrative, a genre that we’ve enjoyed onscreen and, as of late, loosely identify with. All this shows through her clothes. “Simple, button-down dresses do tend to be a recurring element of dystopian, gritty settings,” says Boumaroun, who surveyed the costumes of 75 sci-fi films from 1902 to 2013 for her studies. “If times are hard, people are likely making their own clothing, so it will be simple. They are also probably performing a lot of labor, so their clothing needs to be practical.”

Whether someone wears the dress as a tribute to Aerith, feelings of nostalgia, or our current preference for longer hemlines, “the bottom line on this style is that it works,” says Deihl. “It is not fancy, it’s practical, especially for hot weather. A repeating style in the history of fashion.” A repetition with variation, at that: it went from being preppy to being utilitarian and grunge. In its 2018 iterations, where cotton and viscose models coexist, the “Aerith dress” can seamlessly work from a sticky morning commute to a fancy lunch or dinner, and, more importantly, it’s the perfect uniform for all those who, like Aerith, want to tackle a dystopian reality with practical grace.

*Angelica Frey is a writer based in Brooklyn by way of Milan. She still has to find her ideal Aerith dress. Find her on (14) and on her (10).*