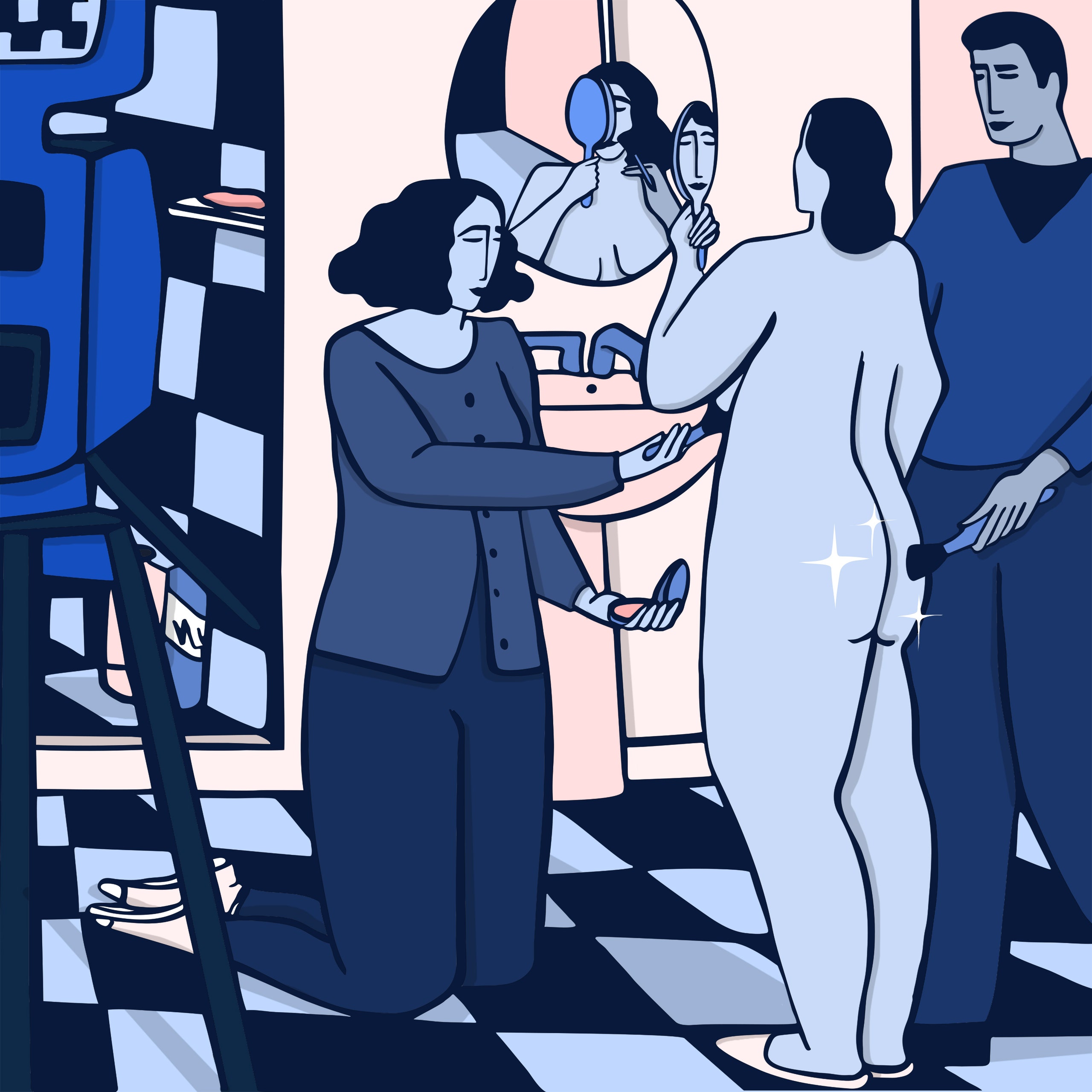 My first hint that something was up was a call from Girls’ beautiful, talented costume designer, Jennifer Rogien. This was in the heady days of 2012, before *Girls* had hit HBO airwaves but after we had begun filming the series.

“Well, I guess we won’t need a fitting this week!!!” she said. “What?! Why?!” was my response. My actor’s ready insecurity had me thinking that I had been cut from the episode or, worse yet, fired.

“Oh, you haven’t seen a script yet? Let me have someone call you.” My phone rang seconds later. None of this was good, in my mind.

Six years later, I honestly can’t remember if it was Lena or Jenni on the line to break the news. I do remember what they said, though: “Quick question. Is nudity something you’d feel comfortable doing on the show?” Oh my gosh. After hearing that they had written a nude scene for me and Peter Scolari, my TV husband, I quickly agreed; I was so relieved to still be employed in my favorite job ever, playing Hannah Horvath’s mother, a disgruntled professor named Loreen.

A sexy, comic shower scene with Peter!! I remember Lena asking me which body parts I’d be willing to share. “Boobs and butt” my reply. I still had decent breasts and an OK butt. Well, I wasn’t sure about the butt, since I rarely took a look, but I was willing to show it on faith.

For many, many years, I’ve listened to my young actress friends discuss nudity clauses in their contracts. Whether you’ve trained at Juilliard or Western Kentucky University, nudity is typically expected these days. It wasn’t the case for me when I came to New York City in the fall of 1975 as a singer/dancer/actress. At that point, the only available auditions for a spectacularly unconnected young actress were the open chorus “cattle calls” that hundreds of aspiring actresses would show up for. I was hired for the out-of-town try-out of what would become Sugar Babies, a musical about the burlesque era. It was a terrific job out of town, but when I was offered two chorus jobs on Broadway at the same time, I took *The Best Little Whorehouse* in Texas, because the role actually had a name, Ruby Rae. I had a character. I wasn’t just a chorus girl.

My first ten years in New York were spent onstage. It took quite a while before I climbed out of the chorus and started doing plays. It took even longer to get an agent and begin auditioning for television and film. I was always a character woman with my red hair and freckles, never the ingénue. Lucky for me, that has meant more work the older I get. Now, many years later, here is my first request for television nudity, and I’m well into my 50s! Flattered or insane? I was going to need a sense of humor.

> I’ve never been someone who was unwilling to go for a great story line or good laugh.

On the day of the shower shoot, our brilliant makeup artist, Joseph Campayno, carefully applied my face makeup and spray-painted my breasts and rear end with such dignity and care that I almost cried. He took all the embarrassment out of the situation.

The first television programming to feature nudity was PBS with anthropological documentaries in 1975. It went fairly unnoticed, and that was more than 35 years before our adventure! The miniseries Roots included partial nudity and created quite a stir, but, by the end of the ’80s, mainstream shows like *NYPD Blue* and *Chicago Hope* were experimenting with nudity fairly regularly.

I have to say that I wasn’t as nervous as I thought I’d be. Maybe it was how comfortable I felt with Peter and how everyone was being supportive beyond words. The scene was so funny, and I’ve never been someone who was unwilling to go for a great story line or good laugh.

Peter and I approached our comic scene very seriously. Although Lena, who was directing, and various producers and writers were watching the scene unfold on monitors in a secluded place, the only person actually on the set with us during the shoot was our boom operator, Jason, who treated the scene with enormous respect. Parts that needed to be covered were covered, and Peter and I stood in a warm, steaming shower, going at it. Lena, as our daughter, Hannah, walks in at an awkward moment, with a wonderful stunt from Peter involved. The whole scene went well, and everyone survived.

I never did see the final product. It’s always been difficult for me to watch myself in anything, even fully clothed.

I wasn’t worried about what friends and folks in the business would think, but telling my mother and college-aged daughter was different. They seemed to take it well, and we had a few laughs about it all. My daughter, Willa, told me later that when the episode aired, she was alone in her college dorm room. At her first sight of me in the shower, Willa fled the room. She didn’t turn it off or scream. She just fled.

*Becky Ann Baker is an actress whose career includes six seasons of HBO’s* Girls, *for which she was nominated for two Critics’ Choice Awards and one Emmy.*