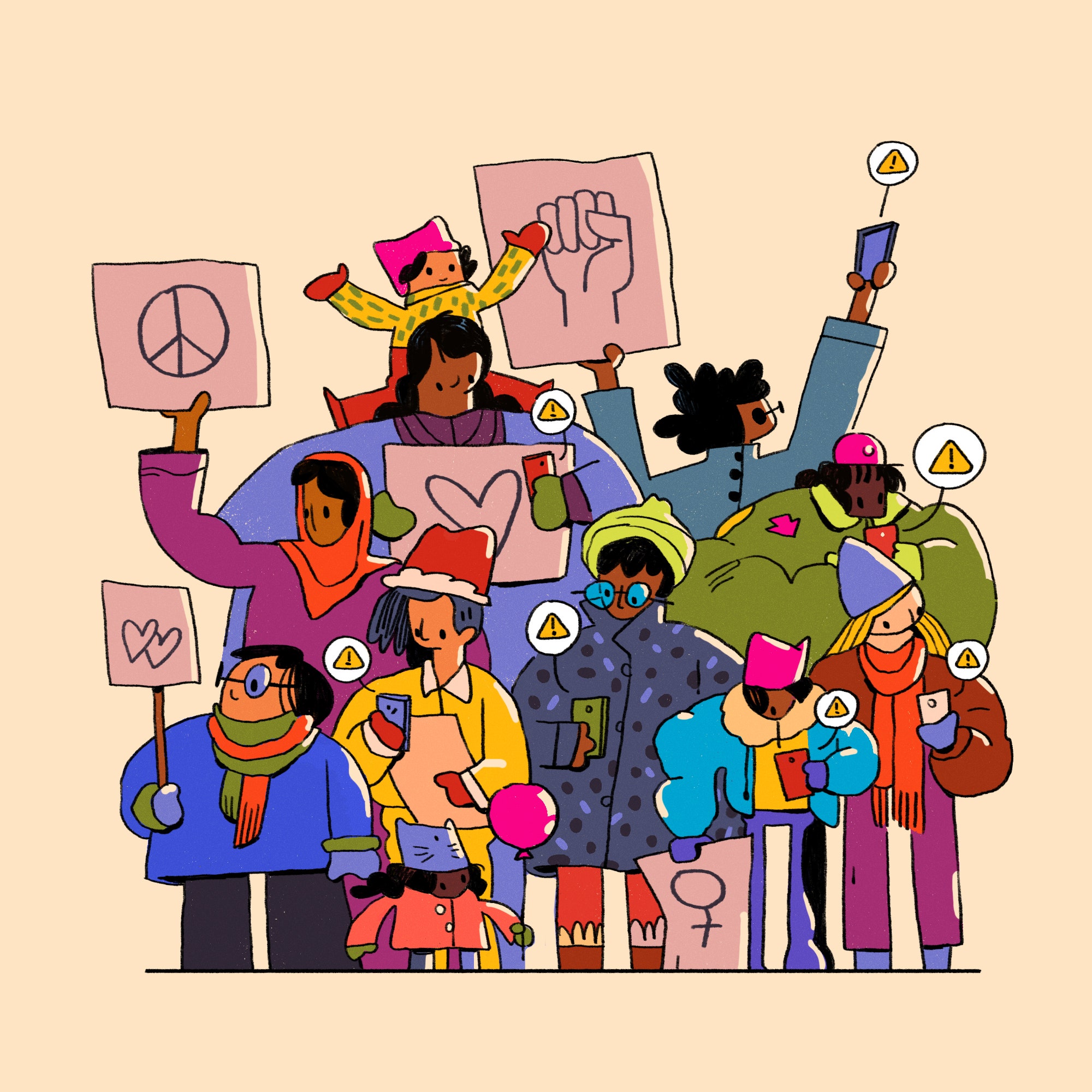 The moment the 2017 Women’s March on Washington became real for me was the same moment I realized we were all technologically paralyzed in its immense shadow.

I’d made the eight-hour trek down from Boston with my mom, aunt, and a friend, on a nearly sleepless overnight coach bus, a trip that had been organized by a grassroots community of women I’d only ever met on Facebook. At 8 a.m., crick-necked but exhilarated, we pulled into the deserted Navy Yard neighborhood of Washington, D.C., on the fringe of the city. I’m only human, and the first thing I do every morning is look at my phone, whether or not I’ve spent the night on an under-padded bus seat that doesn’t recline far enough. So as we lurched to a halt, I whipped out my iPhone to text folks back home to let them know we’d arrived safely, then gratuitously posted to Instagram a picture from earlier of my friend and me looking bright-eyed on our bus seats, captioned, “Fired up, ready to go! En route to the #womensmarch.”

I watched as a few early-morning likes trickled in, then switched apps to open Google Maps so I could lead my famished family on an easy Metro ride to the city’s opposite end for a pre-march brunch at the Coupe, in Columbia Heights. At this point, the nascent march was beginning to form in the city’s central nerve, the National Mall, but as we moved from southeast to northwest we were merely passing through its orbit. As we filled our bellies with life-affirming scrambled eggs and french toast, I of course uploaded a picture of our meal to my Instagram story — and then took another peek at Google Maps to make sure I knew how to get us back to the Metro so we could finally join the march.

I navigated all of these apps the way I always do: with unflinching ease, blindly faithful that an iPhone in hand is a lifeline, and taking my technological reality entirely for granted. When we arrived at our destination — the Archives stop on the Metro — that reality shifted.

I knew the station platform (1) (people stood too far over the cautionary yellow line, inches away from the train as it pulled in), but from the platform itself it was hard to gauge the true size of the crowd. It wasn’t until I got to the top of the escalator and turned around that the density and intensity of what I was joining really hit me. On instinct, I snapped a photo of the unending sardine-like conditions, adamant protest signs already hoisted in the air, and immediately fired it off to the friends and family I’d contacted earlier. “Made it!” the text accompanying my arresting photo said.

But it wouldn’t send. I watched first as a “Not Delivered!” notice flanked the photo attachment, and next as the status bar on the text containing the words “Made it!” stalled out about two-thirds of the way through sending. Then, before finally failing to send, the status bar on the text switched from blue to green, an iPhone’s way of notifying users that it’s aborting iMessage, which requires a Wi-Fi or cellular-data connection, and downgrading to a simple SMS text instead, which use the same networks as phone calls and are normally reserved for messaging with Androids or moments of very poor cell-phone coverage. I was watching my iPhone attempt to eke out some degraded form of communication before all contact was lost.

*What the heck*, I thought, as I halfheartedly focused on leaving the Metro without being trampled.

I considered that maybe the problem was on the end of the people I was trying to contact, so I tried, in vain, to text a different set of people — a group of friends and their moms who were also here in D.C. We’d all hoped to meet up at some point during the day, to share in the hype. That intention was laughable in hindsight. Not a single attempt at contacting another human through my phone was successful (calls and texts alike) until I was on the bus back to Boston later that day.

No one who attended this march had any idea what the gathering would coalesce into. We were hopeful in the waking hours of the Trump Presidency that it would be huge — historic, even — but we didn’t know it would be so enormous that we would cause each other’s cell phones to stop working. Later, when I asked around, only the most seasoned modern-day protesters had even been aware that that was a possibility.

Cell-phone service cutting out in large crowds is a gripe unique to the last decade, but it’s one that is becoming ever more urgent as an increasingly galvanized American public takes to the streets. Normally, when you use a cell phone, it acts as a two-way radio with the nearest cell tower to send and receive information. But just as the number of radio stations you can listen to is limited by how many frequencies are available, there is also a limit to the available frequencies that cell phones can use to transmit information. When too many cell phones are trying to access the same cell tower and the available frequencies are exhausted, the network gets overloaded and no one gets access. It would be like if two radio stations were both vying to broadcast over 107.9 from the same tower at the same time. It’s not possible, and nobody wins.

In a since-removed PDF called “March for Our Lives: Day-Of Guide,” organizers advised attendees of the student-led, social-media-forward demonstration against gun violence that, “Due to the crowds it’s likely your phone won’t have good reception. Download this guide, text as much as possible and have a battery.”

But the overarching problem here is that the way we gather and share information has evolved, and the telecommunications infrastructure simply hasn’t caught up. This is an ongoing hurdle that will only increase in severity as rising numbers of Americans come to own smartphones. (2) concluded, “The share of Americans that own smartphones is now 77%, up from just 35% in … 2011.” The report goes on to show that this usage is rising in every age category, from 18 to 65-plus (although the sharpest increase can be seen in the 18-to-49 crowd).

The issue of exhausting a network is not exclusively tied to the number of smartphone users in a given amount of space, though; it also matters what those people are doing with their phones. And unlike the simple SMS texts of yore, where one of the biggest limitations was just how quickly you could pound out a message on T9, we’re using our devices for increasingly data-intensive behavior, like navigating with Google Maps, streaming video, broadcasting live on Facebook or Instagram, posting to Snapchat, tweeting, or even simply sending pictures. In the context of a crowd, all of these stresses on a cell network are further exacerbated by a newly energized American public. (3), 20 percent of Americans attended a protest, rally, or speech since the beginning of 2016, and of those, one in five people did so for the first time in their lives.)

But why does this all come to a head at large political gatherings like protests, and not at other events where tens of thousands of people come together, such as football games? Simply put, the very organic nature that makes protests so electric — they can come together in a flash, and it’s hard to predict how many people will attend — is what also makes them difficult to support technologically. In and around stadiums, music festivals, or other areas where large events have been planned, carriers will upgrade cell-tower antennas in advance and install “small cells,” which are little boxes that are often installed in and around venues to help supplement any larger towers nearby. Many venues also provide Wi-Fi to try to reroute some of the data demand off the cell networks.

And although there’s no magic number for the density of people that causes cell phones to stop working, crowd size does matter. It’s worth noting, for scale, that the largest NFL stadium in the country — which, irony of ironies, is AT&T Park in Arlington, Texas — has a maximum capacity of 105,000 spectators. That pales in comparison to the size of the Women’s March, which saw an estimated 500,000 people turn out, or the March for Our Lives, which had about 200,000 attendees. That’s a mammoth amount of cellular demand unparalleled in sports venues.

Even so, the increased strain on cell networks is such a problem that efforts to expand coverage ahead of planned crowds don’t always end up working. Leading up to President Trump’s inauguration — which occupied a similar area as the Women’s March, though with one-third the crowd size — all four major wireless carriers had spent millions of dollars trying to update their infrastructures. (4) that Verizon increased its wireless-data capacity on the National Mall by 500 percent, while AT&T spent $15 million to increase its capacity by 400 percent in the same area. Despite the effort, the Women’s March and inauguration crowds both reported having spotty or no reception.

Although no permanent fixes abound, the latest attempt at a solution to this problem is AT&T’s Flying COWs — or Cell on Wings — which act like miniature, temporary cell towers attached to drones. In November, COWs were deployed in a real-life situation for the first time: the devices were sent to Puerto Rico to offer temporary data, voice, and text resources to an island still reeling from the devastating effects of Hurricane Maria, which included damages to its telecommunications infrastructure. The drones also offer an advancement on the small cells currently used in and around stadiums by providing a much wider radius of coverage — up to 40 miles. The obstacle in making COWs a stable part of temporary, movable cellular infrastructure will be in gaining permits to release them near large groups of people, like protests. (5) that expanded the legal use of commercial drones could make this the most promising solution at the moment.

But for now, assume that if you’re joining a big crowd, you won’t have cell coverage. Plan ahead to ensure that you have a known meeting spot if you get separated from your group, and stay alert — in the event of an emergency, you may not be able to contact first responders. And of course you’ll just have to wait to upload all of your pictures and videos to social media until you’re home. But maybe the silver lining is this: having protests be cell-service-free zones could help us live in the moment as we fight for our rights.

*Julia Sklar is a Boston-based science journalist who most often writes about health and technology as they relate to women. She’s also a total Ravenclaw. Find her on (6) and (7).*