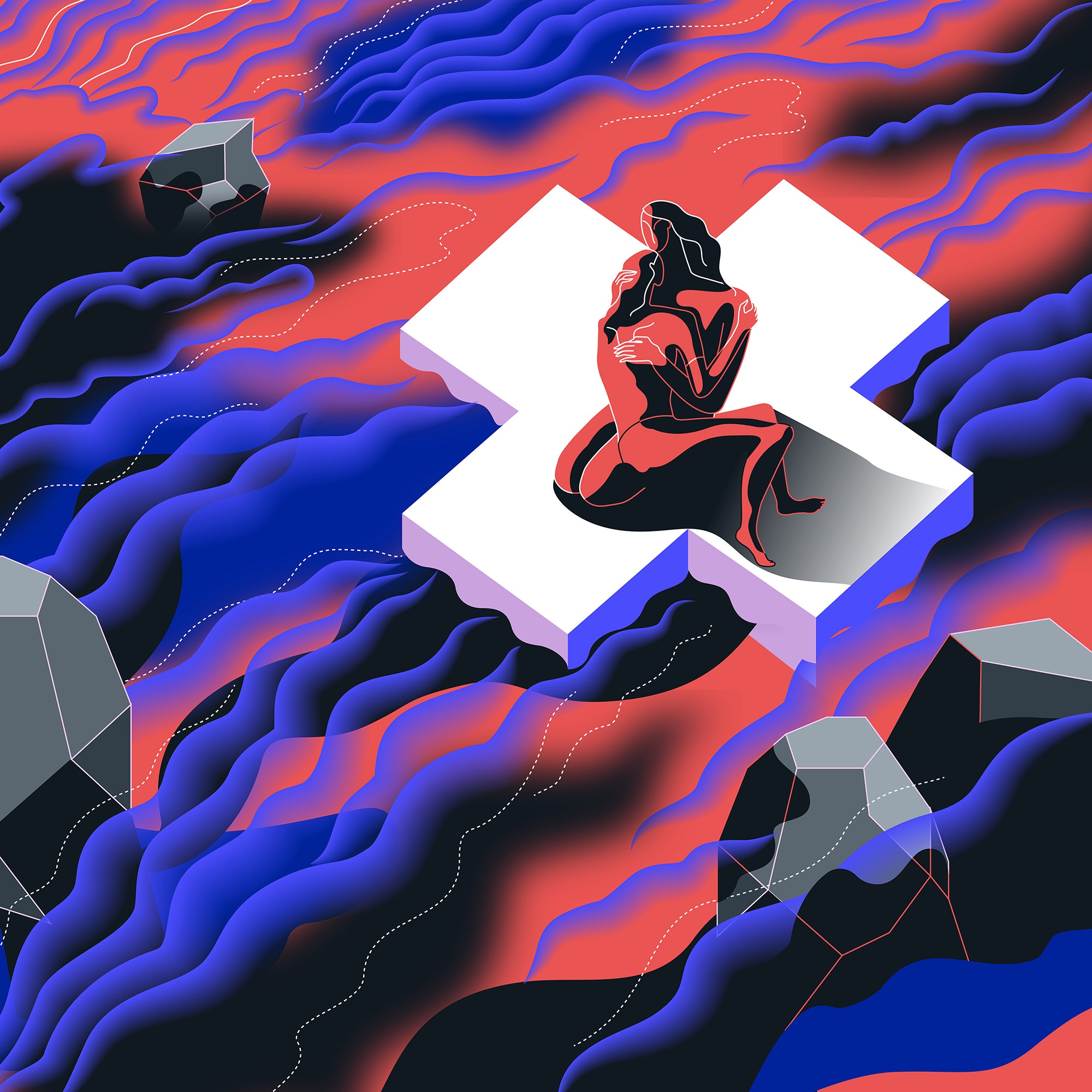 The phone rang at 6 a.m. on a Sunday, one of those crack-of-dawn calls that can never mean good news, especially when you’re the parent of a teen or young adult. It was my 24-year-old daughter on the line, her voice shaky, her words hesitant. “Mom, I need to tell you something,” she said. “I relapsed.”

My initial reaction was concern and a touch of frustration. She’d been in treatment for alcoholism since the previous year, had recently celebrated one year of sobriety, and had moved out of sober living and into an apartment. I knew she worked at a restaurant/bar and figured maybe someone had talked her into going out after work. Alcohol is such a social thing, and it’s so easy to convince yourself it’s OK to have “just one.” I was sad but not terribly surprised.

“You went out drinking?” I said.

“No, Mom. It’s not alcohol.” The phone went so silent, I thought she’d hung up.

Concern and frustration were washed away in an adrenaline-filled wave of pure fear. Suddenly my legs would not support me. My vision went blurry and I wasn’t sure if I was going to throw up or pass out. I found myself on my knees, head bent to the floor, phone still pressed to my ear. Her voice sounded like the far end of a tin-can walkie-talkie.

In that endless moment between trying to breathe and calming my mind, I did a quick mental calculation. She wasn’t quite 25 yet, which meant she could get another year of treatment under my insurance plan or her father’s. *Thank God*, I thought to myself, even as I fought back the hysterical sobs rising from my throat. *Thank God.*

My children were in their late teens when the Affordable Care Act was implemented. When I found out that I’d be able to include them on my insurance until they were 26 years old, owing to my extremely lucky circumstances of having a job that provided decent insurance, I was grateful to be able to pass that gift onto them. It gave me peace of mind and I felt like it would provide some breathing room for them to be able to further their education, travel, or seek out those jobs that might benefit their futures but didn’t provide actual benefits. What I didn’t know then was that the ACA would be more than just a safety net for my children. It would be the difference between life and death.

My daughter is my ex-husband’s child from a previous relationship. I adopted her when she was small, and I loved her with the same zealous intensity with which I loved my biological child. I knew she might have some problems down the road, as there were genetic predispositions toward mental-health issues, alongside drug and alcohol abuse on both sides of her family. I was foolishly confident in my ability to love her enough to overcome any of those things. The fact is, love is never enough when it comes to these things. Love, in fact, can be the very thing that kills.

Her teen years were tumultuous, and my decision to divorce her father left her angry and resentful. She and I couldn’t be in the same room without bickering. When she was eighteen, I told her she could live with me as long as she was respectful and considerate. That didn’t last long. After months of dealing with her stumbling in late at night, drunk and belligerent, I told her she had to move out, which made her even angrier. We stopped talking. I sometimes didn’t know where she was. Months would go by in between contact. She only called me when she wanted something, and I was enough of an enabler to give it to her. I loved her so much, and I needed her to see that. I kept thinking that if I just showed her more love — which for her usually meant money — I could help her.

When she was 22, I got one of those dreaded early-morning phone calls. She’d gone off the road in her car and hit a light pole, totaling both car and pole. By some miracle, she walked away without a scratch. Of course, I jumped in my car to go save her. This time, though, the police were already there when I arrived, and while she somehow managed not to get charged with driving under the influence, they discovered she had no insurance and impounded her car. She sobbed as I drove her home. In that moment, I realized I couldn’t help her, couldn’t save her. She could only save herself.

She nodded, unable to speak. The loss of her car meant she wouldn’t be able to drive to work, which meant she’d lose her job, then her apartment. She knew living with me or her father wasn’t an option, and she and her boyfriend had recently broken up. She’d hit her bottom.

“If I can find a place, will you go to rehab?” I said. Again, she nodded. I remember feeling so relieved, almost happy, knowing that there was hope now.

I got online and started researching treatment facilities. I wanted something in another state, a place she could really start over. I knew she needed a long-term program, and, most importantly, it had to be a facility that would take insurance. As I looked at the costs of some of these programs, many of which were upward of $20,000 per month, I couldn’t understand how anyone could pay for them out of pocket.

The cost of drug and alcohol treatment in the U.S. is prohibitive. A standard 30-day program can range anywhere from $14,000 to $30,000, and outpatient treatment averages $500 per session. Despite the fact that we are in the throes of a full-scale opioid-addiction crisis in this country, affordable treatment is almost nonexistent, and the low-cost options out there often have a years-long waiting list. Being able to get into a decent treatment facility means you have to have one of two things: money, or good insurance. As a single parent living paycheck to paycheck, money was one thing I didn’t have. But I had insurance, a commodity that was more valuable than I had previously understood.

After several frantic phone calls, I found a place that would accept both my ex’s insurance plan and my own to cover our daughter’s treatment. I had to cough up the deductible, which pretty much decimated my meager savings, and I had to purchase her a one-way ticket to California. But I got her there and into the program. She was able to move into the treatment center’s sober-living facility a few months after she started. She was doing well — until she wasn’t.

While addiction is generally considered to be very treatable, relapse is common. According to the National Institute on Drug Abuse, relapse rates for substance-use disorders average between 40 and 60 percent. Some addicts go back to their original drug of choice, while some, like my daughter, take it to the next level.

Because she still had insurance, she was able to reenter the same treatment facility and start detox immediately. The meth detox process was horrifying and brutal, a whole different animal from detoxing from alcohol. I tried to call her every day, but our conversations were bizarre, otherworldly. She made no sense, her thoughts were scattered, she spoke of craving the drug and how she couldn’t focus on anything else. I would cry after these conversations, wondering if she’d done permanent damage to her beautiful mind, if I’d ever see the girl I loved so much again.

The National Institute on Drug Abuse states that approximately 115 people die each day from opioid-related overdose. This doesn’t include the number of people who die from alcohol abuse, suicide in tandem with drug abuse, or those who die from vehicle accidents related to drug or alcohol use. The New York *Times* compiled data for 2016 that indicated more than 59,000 drug-overdose deaths in that year, making drug overdoses the leading cause of death for Americans under 50.

The rate of abuse is highest among those in the 18-to-25 age group, the very group that was provided the insurance safety net of the ACA. While the current administration has not been able to eradicate the ACA completely, it has continued to chip away at it; the threat of repeal is still on the table. The elimination of the tax penalty for those not obtaining insurance has led to an increase in uninsured Americans, and support for “Back to Work” regulations for Medicaid recipients is likely to erode the program even further.

I don’t know what the answer is when it comes to the bigger issues of how to solve the addiction crisis in our country. I don’t know how to create affordable treatment programs for all people, regardless of whether or not they have insurance, in a country that is drowning in addiction.

What I do know is this: repealing or further dismantling the ACA is not the answer to any of it. Had my daughter not been covered under my insurance, there is no way I would have been able to get her the kind of treatment she needed, not just once but twice.

Today, my daughter is thriving. She has a good job, a boyfriend, she even got herself a dog recently. She is sober. She is happy. She is alive. Through treatment, she’s helped me to understand that today is all any of us has, that every morning we wake up is a new opportunity. I know, beyond any doubt, that if we hadn’t had the all-important safety net of the Affordable Care Act, my daughter would simply be another overdose statistic. That early-morning phone call would likely have brought the worst news a parent could ever hear. Because of the ACA, we have today. And with today, there is always hope for tomorrow.

*This piece was supported by the nonprofit (1).*

* (2) is a freelance writer, screenwriter, and author. She is a current fellow with the Center for Community Change, striving to give voices to marginalized communities and their people. Her work is published regularly in regional magazines as well as online. She has two published books:* Ghosts of Alaska *and*  What’s Cooking Alaska *and has written several award-winning screenplays. Follow her on Twitter at  (3).*