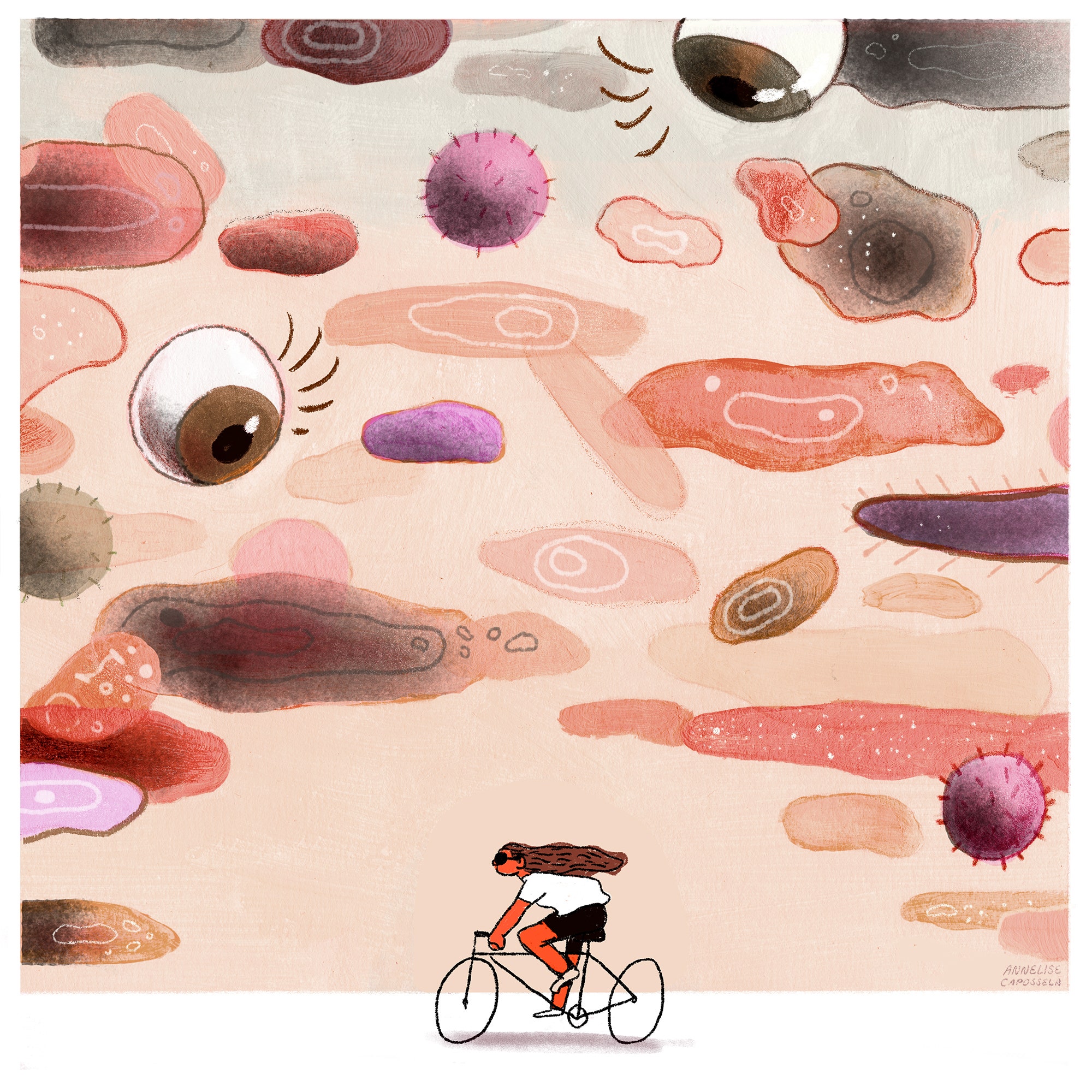 It starts like this. You are lying in bed, poking your stomach, making sure all your organs are cool before you go to sleep. As you press the skin around your navel, you feel a twinge. It’s not a fart, and you definitely don’t have to poop. You press again, this time closer to where you think your ovaries probably are, and you feel something — maybe tenderness. Maybe swelling. It could be your period. It could be a tumor. Then, you flip open your laptop — Google “tender lower stomach when lying down.” The Internet, like a reliable girlfriend, tells you everything.

You can’t seem to stop clicking; one link leads to another. The dire possibilities pile up into a mountain of panic. The more you think about it, the realer it gets. You have all the symptoms — clearly, it’s a tumor in one of your ovaries. Two days later, you are at the doctor’s office, sitting politely, your face tight from holding a mouthful of “What ifs” and “How will I tell my parents?” You sit there with your hands folded in the waiting room ready for your prognosis. Probably death.

It never occurs to you that it’s your thoughts that are giving you trouble, not your body.

When I was little, I prayed a lot. My mother was really into Jesus, so practically every Sunday, my brother and I were sitting on an uncomfortable bench in some house of worship. At first, I prayed for things like extra scoops of ice cream and bright-pink press-on nails. Then, I prayed that the orange seed I had accidentally swallowed at lunch wouldn’t grow to be a tree that exploded my stomach. Then, that I wouldn’t die from never-ending hiccups. My childhood worries took a dramatic shift once I hit adolescence and started to feel my first tingles of sexual desire. I found a book in my house that showed pictures of what could happen to you if you masturbated too much. It wasn’t pretty. After that, I prayed that masturbation wouldn’t turn me into a leper.

By the time I was twelve, I was flipping through my father’s copy of the *DSM II*. My dad’s work as a music therapist gave me access to a small library of books on psychological disorders that I scanned often during spells of boredom. At any moment, I would report to my parents a myriad of self-diagnoses. In the early ’90s, when our family got a computer, the Internet brought my anxieties to new heights. I just had to know everything there possibly was to know about what could go wrong in my body. And whatever could be wrong, I wanted to find it first.

When you have been freaked out about disease since you were a child, you don’t know any other way of being. My illness-related anxiety feels as quotidian as the weather. Some days just drizzle with worry; those are the days when the worst thing I think I have is IBS. Other days, it’s a full-on nor’easter, and I’m certain that terminal illness is festering inside me undetected. I plan my funeral (it’s huge and filled with ’90s R&B) and try to make peace with what seems inevitable. I moved through my college years, my first teaching job after graduation, and graduate school in this way.

It never dawned on me that I might have a serious problem until last year when I had one distinctly awful episode of panic.

I was in the midst of preparing for my PhD qualifying exams — a grueling process that required me to read 300-some-odd books as part of doctoral studies — when one evening I was sitting on my bed rubbing my eyes like people sometimes do when they’re tired. Somehow, as I rubbed, it seemed like my eyeballs had moved from their usual position, and I thought they might fall out of my face. I didn’t know what to do or who to tell, so I called a girlfriend and asked her about the likelihood of such a thing. She said she was 100 percent sure my eyeballs would remain firmly in their sockets.

But I went to the eye doctor anyway, who said I was fine and that maybe I needed some new glasses.

At home, I decided to ask my husband what he thought. “Do you think I worry a lot?” I asked.

He laughed loudly and said, “Uh, is a pig’s feet pork?”

Even though I rolled my eyes a little bit at the uncoolness of his choice of expression, I was relieved to hear it. It was my first inkling that maybe my perpetual illness scares didn’t mean that I was incredibly susceptible to death and disease. Maybe there was something else was going on, something that could be fixed without a liver transplant.

One the challenges of illness anxiety is how people can respond when you’re in the midst of an episode. My biggest fear has always been that people will think that I am crazy. In my early twenties, I was most fearful. So for most of my young adult life, I hid it. I took taxis to the emergency room in the middle of the night and told no one. I spent sleepless nights scrolling through symptoms on Mayo Clinic and never said a word to friends or family.

With my husband, it was difficult to hide my illness anxiety, even if I wanted to. I’m my most vulnerable self around him. In the months after I initially asked him what he thought about my worries, he explained to me how my hypochondria had been chronic. That I worried not only about being sick myself but also escalated his minor sniffles into walking pneumonia. He told me that he didn’t want to tell me most things that were health-related because he feared that they would send me into a spiral. As I sat there, processing this new information, he repeated over and over, “Naomi, you worry all the time.”

This gave me pause. But I needed a second opinion. I called my mother, who told me that I had complained about being sick since I was little. She said I’d been a nervous kid and that I’d always had a stomachache. I began to remember eight-year-old me. When Mom came home one day with the news that the doctor had told her she had high blood pressure, I was terrified. My mother showed me, anecdote by anecdote, that I’d had a long history of illness anxiety. Talking to my mother and my husband took me out of my head, where my hypochondria had had a happy home for so many years. I saw that I wasn’t sick and had no real reason to believe that I was.

The actress and comedian Jenifer Lewis once said: “If you sit in shit too long, it stops smelling.” It was my husband who gave me my first whiff of just how troubling my anxiety was. Since then, I’ve decided to do something about it by working with my therapist to incorporate anti-anxiety strategies into my life. In the past year, I’ve learned that my worry is triggered by feelings of stress and losing control, so I started exercising more. It turns out that after 60 minutes of hot yoga, I’m too tired to even think. And when I’m in the midst of an episode, I’ve found one simple and rational question to ask myself: What else could this be besides a life-threatening illness? I also try to resist Googling as best as I can, and I lean on those closest to reassure me that I’m not dying when I’m caught in a torrential storm of thoughts about sickness and disease.

I am by no means free of worries about illness. Just last month I thought I had a brain tumor. Fortunately, instead of rushing to the emergency room, I tried to come up with some other reasons why my head might be hurting. Eventually, I realized that what I had wasn’t a brain tumor but a tension headache.

I don’t know if there’s a cure for illness anxiety; it might be something I struggle with for the rest of my life. But at the very least, when the thoughts come, I remember Jenifer Lewis’s advice and try not to spend too much time sitting in the shit storm of my thoughts.

*Naomi Extra is a poet, writer, and doctoral candidate in American studies at Rutgers University–Newark.*