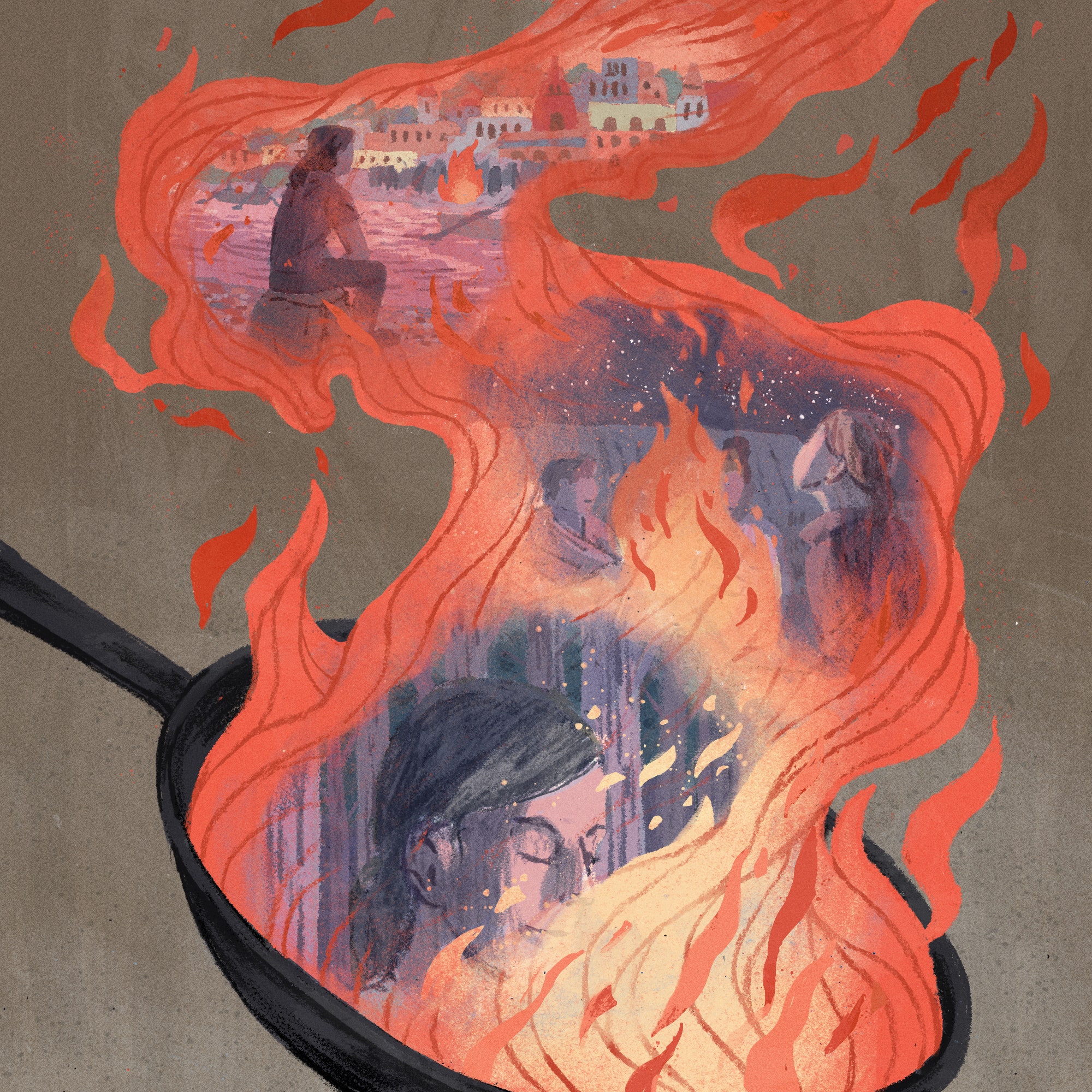 Growing up in the suburbs of Chicago, our family would gather together at weekend barbecues in the summer. Fire, then, was almost like a piece of furniture. It was a way that we gathered people, it was a way to commune around food. It wasn’t until I began to travel and cook with different people and cultures that cooking with fire became an honoring of this *primal* element.

When I was twenty, I lived in Nepal and India. I would sit on the banks of the Ganges River in Varanasi and just watch the fire for hours. The Hindu funeral rites of cremation at the Ganges River were emotional — there’s a lot of sadness involved, but also this relief.

Fire was used in different ways in ceremonial cooking, too. The char and flavor of the street food in India and Nepal was something I wanted to keep going back to. It drew me in. To watch the people cooking was almost like watching them dance with fire. It looked effortless, intrinsic. That was the beginning of the spark. While I was there, experiencing all these new flavors and spices, I thought, *This is what I really want to do.*

Before moving back to the States, I had been living, cooking, and traveling through Australia for the better part of six months. Most of my vivid memories in the outback are based around a fire: food cooking over it, stories being told. I loved the way my clothing smelled after a night around the ring — dusky and warm, sweet yet deep. These smells permeated the food we ate. They danced into my hair and swirled up to the moon, following our laughter out into the night.

Something struck me while staring at the stars under the open sky near Uluru one night. It hit me hard and drew me fully into the craft.

Back in the States, I took a job with Marsha McBride at Café Rouge in Berkeley. I worked my way from the garde-manger station to the sauté station and then to the grill. The days would begin by lighting the wood: at first, a slow burn, then an abundance of smoke, the catch — a few hearty breaths blown on the sparks to encourage ignition. I would carry on with my prep tasks, setting up my station, washing greens, cutting steaks, all the while watching the fire out of the corner of my eye. I’d listen to it, I’d feel the heat of it against my back, and it would talk to me, tell me when it needed to be moved around, when it was gasping for air, and when it needed more fuel. It was a relationship, a conversation in the quietest, truest form.

Fire in cooking can alter the nutritional aspect of food, coax out sugars from starch, deepen flavors through the Maillard reaction, add smoke, and penetrate an ingredient with heat all the way to its core. By cooking food, we ward off disease and bacteria. Heating breaks down collagen in meats, making them more bioavailable for the body. Heat can also soften cell walls in some vegetables, causing them to release sugars, starches, and lipids into a matrix of minerals that our bodies are ready to utilize for energy and repair.

As the days went on at Café Rouge and I began to understand the fire more, I gained a deep respect for it. It calmed me in the busy moments and woke me up if I took my attention away for too long. I learned the hot spots, the cool zones, when to rush in, and when to back off.

In Northern California, I also started spending a lot more time in the woods and a lot more time camping. There was something about building fires in the woods, grounded in nature, that really built my awareness of the power of fire and the transformation within food.

I would backpack with duck racks on ice so I could cook it up in the middle of the Sierra. I remember a meal of cipollini onions, duck breast, and a bunch of greens that all got overly charred on the grill — we ended up eating figs with lemon curd for dinner. I would never do that today, but I was a young cook; I wanted to experience it all, so I schlepped this whole meal up a mountainside.

When I lived in San Francisco and was working as co-chef of Bar Tartine, we partnered with Justin and Mindy Enos from Full Table Farms. We would spend all morning picking the late-season peppers — we’re talking 300 to 400 pounds at a time. We would build this huge fire, and then we would put grapes over the top, and we would just roast batches of peppers. Oftentimes, we would take the walnut shells from their trees, and we would soak those to use in the fire for both aroma and fuel.

When night came, we’d still be there, enjoying meals, sharing our time together, and then we would take all the peppers back to the restaurant and make charred-chili paste. I still have one that we call the Full Table 2015 chili paste.

There’s such resonance in how we can come together over food, over fire, over old rural techniques, to create something that has flavors that are different than that of the whole. Every time I taste that paste, I’m transported back to those times with everyone at the farm.

It’s been seventeen years since I worked the grill at Café Rouge, and now I find myself in Western Massachusetts, building a new restaurant in the northern Berkshires. Everywhere I look, I’m reminded of the people who came before me. I yearn to cook with wood that tells its years to you if you care to count. Wood that tells stories of drought and fire, wet springs and hot summers. Within the walls of the restaurant, I’m bringing the fire back to the table.

In the spring of 2017 — April 1, to be exact — I moved to Western Massachusetts from San Francisco. The joke was most definitely on me that April Fool’s Day as I drove in a wild and windy snowstorm from Boston to North Adams, winding through the Mohawk forest. The fog was as thick as marshmallows as I inched my way around a hairpin turn into the valley.

It was a slow rise to spring, but when it finally emerged, my new yard was flush with lilac bushes and an enormous rhubarb plant. The lilacs created a sense of home — I grew up with a tall bush outside my window, spring breezes aromatizing my dreams, and stalks of flowers scenting the kitchen as we dined.

This recipe is my ode to new beginnings, as it has the first flavors I tasted from my own lawn in Western Mass. Here, I char the rhubarb a bit, coaxing out its sweetness while leaving some raw for tannins and bitter to layer in.

TO MAKE THE LILAC SYRUP:

1. Mix the lemon juice and honey in a 1-quart container until the honey is dissolved; stir in the lilac.
2. Press a piece of parchment or plastic wrap against the surface to minimize exposure to air, top with a small weight to keep the flowers submerged, and tightly cover. Allow to infuse at room temperature (65–70℉) for 1 week, checking on the flavor every few days. Transfer to the refrigerator for up to 2 weeks or the freezer for up to 1 year. (Yield 1 ¾ cups.)

TO MAKE THE RHUBARB TONIC:

3. Set aside ½ pound rhubarb to leave raw. To char the rest, set a metal rack directly over a gas burner with medium-high flame; prepare your grill with medium heat; or set an oven rack a few inches below your broiler. Char the remaining rhubarb, in batches if necessary, until it is browned in places but still very firm and crisp. Cool to room temperature.
4. Chop the raw and charred rhubarb into chunks and run through a juicer, or purée in a blender, then use cheesecloth to strain the solids. Smash the juniper berries, and add them to the juice. Cover and refrigerate for up to 1 week, or freeze for 1 month. (Yield 2 cups.)

TO MAKE THE DRINK:

*Cortney Burns is the chef behind Tourists and its forthcoming Loom restaurant in North Adams, Massachusetts. Previously, she was one half of the team behind the beloved San Francisco restaurant Bar Tartine. Together with her partner, she received a James Beard Award for the* Bar Tartine *cookbook.*