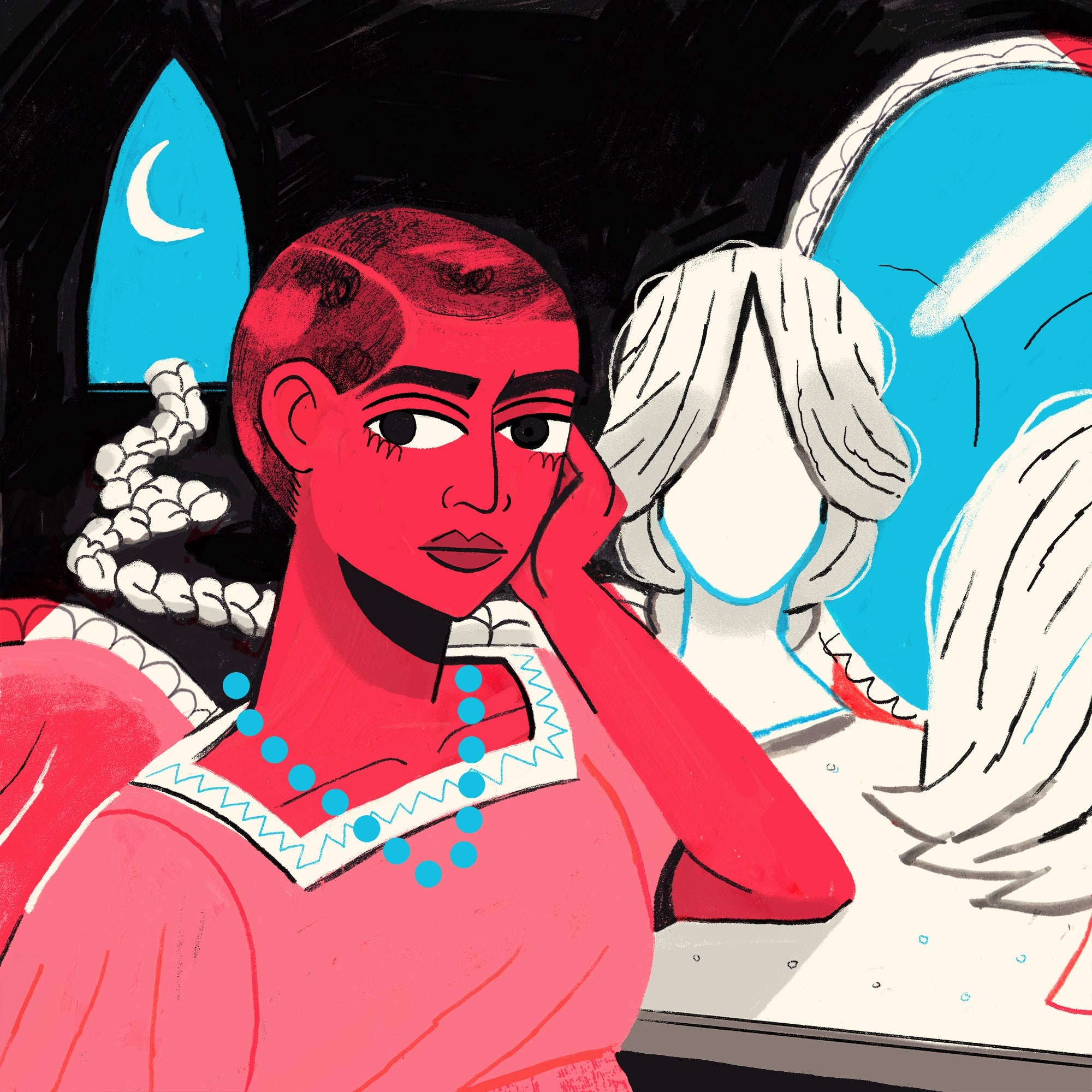 In my early twenties, I found myself on an unforgettable date. He and I had briefly met at an event the week prior and spent a few days in conversation over the phone. Initially, the first date seemed promising: he picked me up in his car (a super-duper plus for NYC), picked one of my favorite restaurants, and had me in tears from laughter mid way through dinner. And then, he brought up my least favorite topic: hair.

“Black women with natural hair are goddesses to me,” said my date, as he smiled a child’s grin from across the table. “The fact that so many Black women choose to wear weaves and wigs is a disgrace to me. Like, how much can you publicly hate yourself?” he scoffed. I uncomfortably adjusted my chair and picked up my glass of wine; gulping until the cup tilted back above my head. Drinking was my only salvation as my kinky, curly wig caught onto the zipper of my jacket, thrown on the back of my seat. “See, things like that” — he laughed as I fiddled with the coat and my faux fro — “all of those Black wannabe-woke women who wear that horsehair don’t know your struggle.” At that very moment he flashed a beautiful set of perfect white teeth that bounced off of his chocolate dark skin, but I couldn’t afford the luxury of relishing in that anymore. Now, I had to be a gentle, but stoic bitch who had to educate yet *another* man about his ignorant ideas on Black womanhood.

My eyes bulged out of my head, and I wanted to scream. The first date I’d enjoyed in a long time was taking a turn for the worst at the finish line — fantastic. I exhaled. “I’m not really sure what you mean,” I said with a slight cock of my head and an expressive batting of my eyes. “All women wear all types of different hair, and it really has nothing to do with being Black or prideful; it’s all just personal preference and aesthetics.” I rolled my eyes, then made direct eye contact with him so he could grasp that I was neither impressed nor flattered. He stumbled a bit. “I only meant that Black women who wear wigs and weaves are obviously just embarrassed about being Black. Why would they want hair like a white woman?”

The rest of the conversation that night is all just a blur now. But what I do remember is deciding to never take another call from him. Certainly, he didn’t deserve to know my truth and I’m glad that I never revealed it to him. Perhaps it’s a bit petty to say I stopped talking to him because he said he didn’t like “unnatural”-haired Black women. But in reality, it’s much deeper than that.

Because I was born with alopecia areata, I’ve never had a full head of hair — not even a quarter full. Throughout elementary school, I braved the questions and the stares; I was still this adorable little girl, after all. By the time sixth grade approached, I felt different. I didn’t want to feel like an outcast. I didn’t want to have to explain that my hair patches weren’t from chemotherapy or why it made me look so alien compared to other girls and boys. So my mother, sisters, and I shopped for a wig. I’ll never forget it: it was twice the size of my head, with huge bangs and shoulder-length dark-brown hair. My head felt huge, and for months it was extremely uncomfortable. But it released me from the constant anxiety and instant ridicule I had often felt — although it induced a low level of paranoia.

That paranoia reached its fever pitch the first time I kissed a boy. I was visiting my family in New Jersey the summer before seventh grade, and one boy in particular caught me eye — as I did his.

He was cute, tall, dark skinned, slim, slightly older (going into eighth grade), and most likely a geeky gamer, too. Whether it was planned or not, by the end of the day, he and I ended up in the driveway of our mutual friend’s home — alone. The kiss was as magical as any first kiss that ended with giggling, wondering, unsure embarrassment. But there was also a feeling I hadn’t anticipated — his tongue. The tongue led to what was supposed to be a warm caressing of my face and neck, but the proximity to my nape, which was directly below the strap of my wig, quickly flipped my excitement to pure anxiety. Little did I know that it was the beginning of an emotion that I would experience for many years to come.

In all of my (pleasant) dating experiences, I’ve dealt with this same rushing feeling, of being swept off my feet and made numbly afraid that my wig would be swept off right along with it. Even with all of the new options for wigs — whether I get them custom fit, wear full lace with adhesive, or just use a regular strapped piece — I suppose the feeling won’t ever go away until I decide to be bald and free publicly. Wigs aren’t as risqué today as they were when I was an eleven-year-old girl; now they’re a regular occurrence from celebrity red carpets to your local clubs. But here’s the thing — disclosing the fact that you wear a wig and why is extremely personal. Over the years, I’ve oftentimes had to make quick decisions about if I should lie or be completely vulnerable to a stranger. The question *is that your real hair?* or a simple compliment can make me uneasy. Do I say *thank you* and carry on, or do I just plainly tell the truth? Many times, when I was younger, I preferred the lie. These days, I just give the honest truth as early as comfortably possible.

My wigs and I have been through a lot over the years. They’ve been pulled off by mistake in the heat of intimacy or an argument; slid off in public due to sweating; pushed back after an accidental bounce of a ball to my head; and, once, even publicly exposed by way of a third party in an attempt to embarrass me. I have stories for days and all of them end differently. But when it came down to it, I realized that I wasn’t comfortable telling potential lovers about my disease because I was worried that it would scare them away. Would they think I was weird? Would they be embarrassed to be with me? Would it be uncomfortable for them? I was trying to hide who I was because I was worried I wouldn’t live up to a standard; a standard that I had created for myself and could literally never live up to.

These days, I’m much less afraid of how men will react once I reveal my truth — I’m much more interested in finding out who they really are once the truth shows up. I am not my hair, but I am not *not* my hair — and I’m damn sure no one’s local hair educator.

*Jasmine “Jazzi” Johnson is a writer, journalist, essayist, and scriptwriter from New York City who is relocating to Los Angeles to pursue scripted animation full time. Her docuseries* Black Girl Bald *is currently in production and focuses on the challenges and adversities Black men, women, and children with alopecia face in their day-to-day lives.*