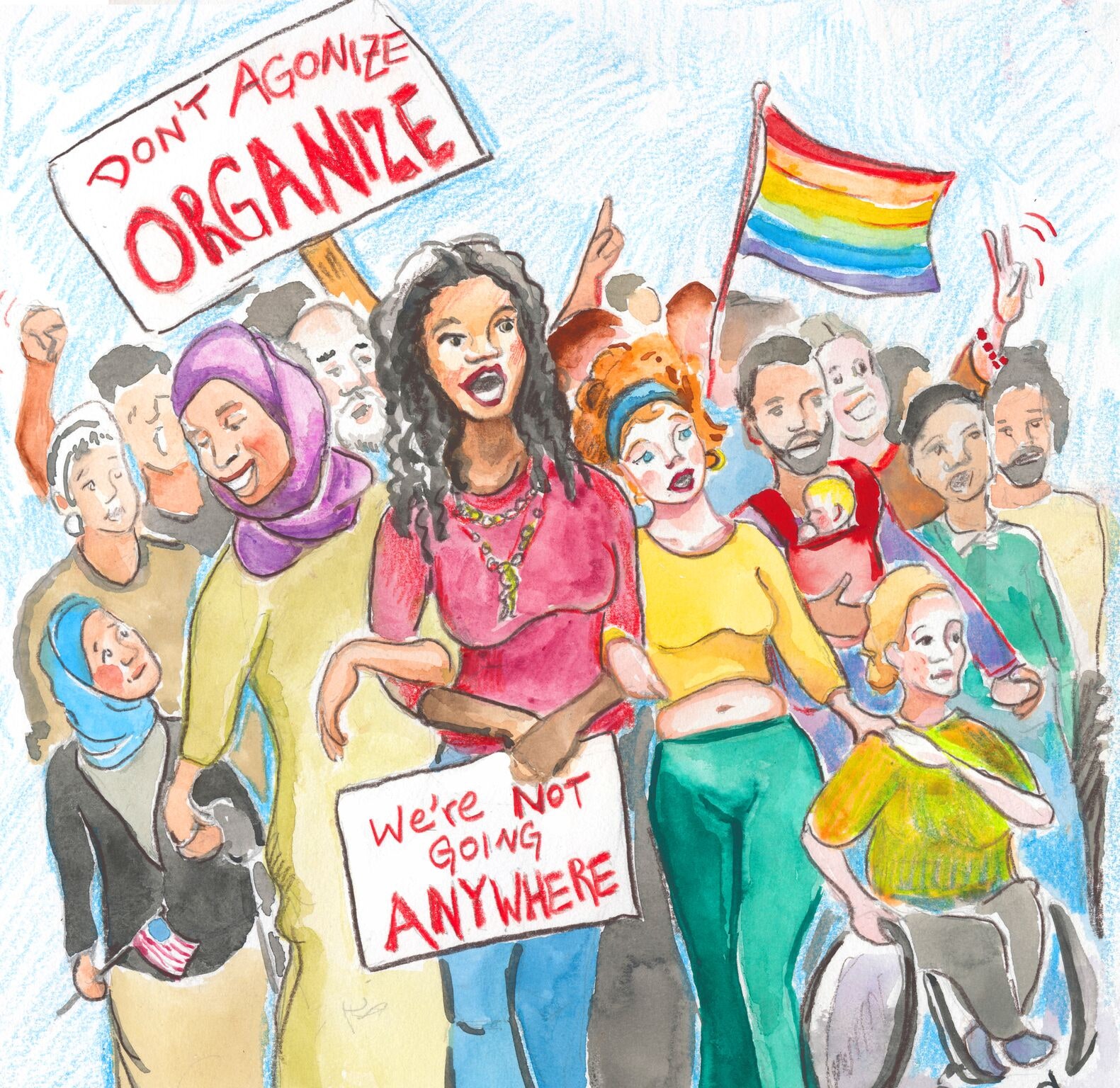 A Message to Our Lennys:

_”It is not our differences that divide us. It is our inability to recognize, accept, and celebrate those differences.”_

I woke up on Election Day like a bride: rosy, thrilled, a little controlling about just how MY perfect day would be spent. After working on the Clinton campaign for eighteen months, I was ready to celebrate, and sure that by nightfall I’d be knocking back glasses of champagne and creating a story to tell my unborn children. Maybe I’d even get close enough to Hillary Clinton to hug her, to whisper “Thank you.” I had dreamed about it every night for the last two weeks.

So on Tuesday — Jesus, it’s almost embarrassing to remember — I smugly selected a baby-blue sweater with a not-so-subtle pussy motif and headed to vote with my boyfriend, smiling at the elderly socialists on my block like it was Sesame Street. I packed my HRC 2016 memorabilia into a brown box with my I VOTED sticker smacked on top. I spent the afternoon phone-banking with friends, and it felt more like icing on the cake than urgent business. Because as horrifying as I found Donald Trump’s rhetoric, as hideous as I found his racism and xenophobia, as threatening to basic decency as I found his demagogue persona, I never truly believed he could win.

I’d been traveling the country for the last few weeks, in swing states like North Carolina and Colorado. While I’d dealt with a few irritating email questions (those fucking emails, as if they were a worthy corollary to fraud and sexual assault), the resolve and passion of students, many of whom had made their way over from the Bernie Sanders campaign, gave me a sense of hope that got me downright high. I didn’t see how with faces this bright, diverse, wise, and passionate anything but the best — the only — result could prevail.

> “In a society in which equality is a fact, not merely a word, words of racial or sexual assault and humiliation will be nonsense syllables.” —Catherine MacKinnon

The three hours I spent at the Javits Center Tuesday night, surrounded by campaign staffers and fellow surrogates for Hillary Clinton, are blurred and spotty. At a certain point it became clear something had gone horribly wrong. Celebrants’ faces turned. The modeling had been incorrect. Watching the numbers in Florida, I touched my face and realized I was crying. “Can we please go home?” I said to my boyfriend. I could tell he was having trouble breathing, and I could feel my chin breaking into hives. Another woman showed me her matching hive, hidden by fresh concealer.

I hugged the women I had spent eighteen months with, laughing and plotting and spreading our love for Hillary Clinton and her message. My party dress felt tight and itchy.

By the time we’d made it over the bridge, a friend called. “It’s over,” she said. “I love you.” I was frozen. We stopped at the diner. No one was speaking as they ate, no one in the whole place.

At home I got in the shower and began to cry even harder. My boyfriend, who had already wept, watched me as I mumbled incoherently, clutching myself. “It wasn’t supposed to go this way. It was supposed to be her job. She worked her whole life for the job. It’s her job.”

> __”Truth is powerful and it prevails.” —Sojourner Truth__

Over the year and a half I worked on the campaign, I received threats and abuse at a level I could not have imagined. My Twitter mentions went from rude to downright violent. My phone was hacked, and I was sent images of aborted fetuses, weapons. I was called a fat whore, a retard, told I should be killed in front of everyone who knew me. My experience mimics that of so many women who organized for Hillary Clinton and against Donald Trump, most of them not celebrities. We wanted a female president. We wanted guaranteed control over our own bodies. We wanted equal pay. That made us nasty. That made us targets.

But we kept going, thinking these were the dying moans of the dragon known as the patriarchy being stabbed again and again in the stomach. We believed that on November 9, they’d be licking their wounds while we celebrated. It is painful on a cellular level knowing those men got what they wanted, just as it’s painful to know you are hated for daring to ask for what is yours. It’s painful to know that white women, so unable to see the unity of female identity, so unable to look past their violent privilege, and so inoculated with hate for themselves, showed up to the polls for him, too. My voice was literally lost when I woke up, squeaky and raw, and I ached in the places that make me a woman, the places where I’ve been grabbed so carelessly, the places we are struggling to call our own.

It’s a privilege to be heartbroken by the system for the first time at age 30. So many people — those in the prison system, those with undocumented American relatives, those who are trans, who are queer, who are people of color, who are Muslim, who are trying to prosecute their abusers — have felt the crushing failure of the system over and over again. This is just another dark week. This isn’t surreal like a death or a bad diagnosis. This is their life.

Millennials overwhelmingly voted against Trump. Our generation says no, as do first-time voters, to what this man and his presidency represent. We reject, wholesale, his brand — any brand — of hatred and bigotry. We are the generation with the strongest and most vast understanding of identity politics yet. We recognize intersections and contradictions and want to make room for them in people and in government. Our hearts are open, but our resolve is strong. We want to create a different kind of America than has ever existed. America will not be great until it fulfills its promise of liberty and justice for all.

> “You’ve got to rattle your cage door. You’ve got to let them know that you’re in there, and that you want out. Make noise. Cause trouble. You may not win right away, but you’ll sure have a lot more fun.” —Florynce Kennedy

Wednesday was a day of mourning. Thursday, too. Hell, I’m giving us till Sunday. But then we fight. Now, more than ever, our power is in numbers and in our refusal to accept the idea that our leaders intrinsically know what’s best for us, better than the people we meet every day. In the last few days I have watched a little girl cry, wondering if her mother would be deported. I have listened to a black man ask how to explain this to his sons. “You tell them, over and over again, not to be a bully or a bigot, to respect women, to be kind, that’s how you get ahead. And now a bully is the president. How do you explain that?” I see two teenage girls, one Latina, one white, in belly shirts holding hands as they pretend to go the wrong way on an escalator. They’re laughing and smiling and I wonder if they know that together they’re a tiny revolution.

> “I am deliberate and afraid of nothing.” —Audre Lorde

In this new reality, we have all been radicalized. It’s no longer a word for those living on the fringes. It’s a word for everyone who walks in pain with the results of this election, who feels their identity being crushed under the weight of the half of the country who voted for a man who denounces and denies the basic rights of women, the queer community, immigrants, Muslims, people of color and the differently abled. We’ve been radicalized and therefore we’ve been deputized to do our parts. What that means will become clearer over the coming months, and we will all have to use the tools we have to speak for ourselves, but moreover speak for the voiceless, the people who can’t demand change for fear of very real and violent losses. Those who are gagged by the system Donald Trump proposes.

> “Dignity does not come from avenging insults, especially from violence that can never be justified. It comes from taking responsibility and advancing our common humanity.” —Hillary Rodham Clinton

A lot of people have been talking about how we need to try to understand how this happened and what’s going on in the minds of the people who voted for Donald Trump. Maybe. Maybe. But maybe let’s leave that to the strategists, to the men in offices who need to run the numbers. It should not be the job of women, of people of color, of queer and trans Americans, to understand who does not consider them human and why, just as it’s not the job of the abused to understand their abuser. It’s quite enough work to know about and bear the hatred of so many. It’s quite enough work to go on living.

> “I am not going to die, I’m going home like a shooting star.” —Sojourner Truth

It’s hard to feel it this week. It may be hard to feel it next week. But the work of this election, the promise of Bernie Sanders’s and Hillary Clinton’s campaigns, the dream of changing the face of the White House, is only just beginning.

Thank you, Hillary, for bravely taking every shot and standing tall, for weathering assaults from every direction, for telling us that no, this wasn’t politics as we know it, and no, you were not going to let a chronic interrupter with a limited vocabulary of catchphrases stop you from speaking coherently about your dreams for this country. Thank you for 30 years of public service. Thank you for showing our daughters something beautiful to aspire to. Thank you for reminding us what we are capable of when we are focused and ferocious. Thank you for 30 years of that. Thank you for not abandoning us now.

So no, the work isn’t done. It is only beginning. We will stun ourselves with what we are capable of. We will laugh with surprise like kids who finally threw a punch back at the schoolyard bully. We will watch our friends in awe as they step forward and demand more, as they recognize and wield their politicized identities. We will not be governed by fear. We will show our children a different way. We will go home like shooting stars.

I’m proud of you,