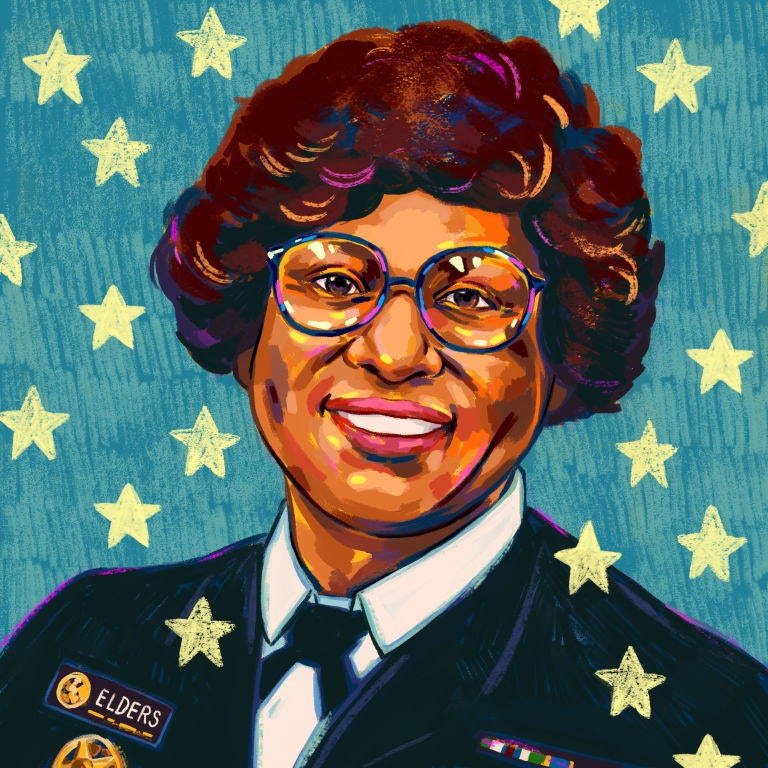 As I sat down to write this introduction to my interview with Dr. Minnie Joycelyn Elders, former surgeon general of the United States and lifelong advocate for universal health care, politicians in the Senate had just voted to consider legislation that would have stripped health services from millions of Americans. The proposed changes to the Affordable Care Act — the 2010 law that expanded health coverage and struck down restrictions that kept many people from receiving routine care due to preexisting conditions — would have affected people who rely on assistance from Medicaid, Medicare, and the low-cost-insurance marketplaces made possible by the ACA.

These rollbacks were just one skirmish in the epic fight for a healthier, more just society. In the 1980s and ’90s, Dr. Elders was on the front lines. As director of the Arkansas Department of Health from 1987 to 1992, she campaigned for more clinics and better education, resulting in an increase in childhood immunizations and a reduction in teen pregnancy, as well as an expansion in prenatal care. As surgeon general from 1993 to 1994 — she was the first black person to hold that position — Dr. Elders and her progressive ideas about reproductive health, sex education, and prison reform came under constant fire from social conservatives. She used her national platform to promote sex education (a matter of life and death at the peak of the AIDS crisis) as well as reforming drug laws. The Clinton White House forced her to resign under Republican pressure when she suggested that (1) should be part of health curricula. Afterward, Dr. Elders did not waver from her mission: she returned to her alma mater, the University of Arkansas for Medical Sciences, to teach pediatrics, and has continued in the years since to advocate for the expansion of health services and education, drug and prison reform, and diversity in the medical sciences.

For the woman who once said that young girls of color who cannot access care are “captive to a slavery the 13th Amendment did not anticipate,” health care has always been a human-rights issue. These days, when it starts to feel like so many Americans are afflicted by a callous disregard for the health of their fellow human beings, I feel grateful for people like Dr. Elders who have yet to give up despite the obstacles they’ve faced in their work. I was honored to speak to her over the phone on a recent summer afternoon.

__Rose Lichter-Marck:__ How did you first get involved in public health?

__Dr. Joycelyn Elders:__ I grew up on a farm in a three-room shack. I was the oldest of eight children. We were very poor. We didn’t have running water. We didn’t have electricity, so we didn’t have TV or radio. No one had health care. There were no health facilities for miles and miles. The first time I saw a doctor was when I was a freshman in college. So I couldn’t grow up wanting to go into public health, or even wanting to be a doctor, because I’d never even heard of that. You can’t be what you can’t see!

__RLM:__ When did you realize that you could be a doctor?

__DJE:__ When I was a freshman in college, (2) the first black person to attend the University of Arkansas School of Medicine, came to speak at my school, Philander Smith College, and she talked about her own aspirations. She was still a medical student at the time. After I heard her speak, the only thing I could think of was that I wanted to be just like her. Whatever I had to do to do that was what I was going to do. So I worked to become a pediatric endocrinologist.

When I was asked by then-Governor Bill Clinton to come be the director of the Arkansas Health department, I was concerned with young women, young black women, especially, in the Delta. I had been working with children with diabetes and teenagers to try to make sure they had healthy babies, or didn’t have babies until they were ready. That was my major concern. When I saw someone in trouble, I would say, “Except for the grace of God, there goes I.” I was doing what I thought would make a difference in the lives of young women because of how I had been helped. And I loved every minute of it.

__RLM:__ I read that in your retirement you have been working to increase the numbers of women and people of color in the medical profession, and I’m wondering if that’s also related to what you were saying before: “You can’t be what you can’t see.” Why do you think it matters who administers care?

Women already shoulder most of the responsibility for care in this country. They care for their children, for other people’s children. Not to say that men don’t contribute. But the bulk of the work is done by women. And women know how to keep people healthy.

__RLM:__ Listening to you, I keep thinking of the faces of the thirteen white men deciding the recent Senate health-care bill behind closed doors. And the voices of people who say things like “Why should a healthy 50-year-old man pay for somebody’s maternity care?”

__DJE:__ A 50-year-old man is not necessarily thinking about the fact that somebody paid for his grandmother’s maternity care, or his mother’s, or his sister’s.

I believe that the reason we do not see health care as a human right is that our country is run by a class of white men who don’t understand the problems of *needing* and *not having*. Perhaps they’ve never been there themselves. Nobody wants to be poor. We all want food, clothing, and shelter. And health care, too.

Look, the U.S. has the best sick-care system in the world. But we have not worked to keep our people from getting sick in the first place. If you really look at how we’re doing, our life expectancy, our prenatal care, our infant-mortality rate, all the measuring sticks that we use to measure health, we’re not doing very well. We know how to do a much better job with health care. We know how to do it a lot cheaper. We know how to make people healthier. We can’t wait until people get sick and go to the emergency room. That’s too little, too late.

__RLM:__ Your public-facing career often had you ruffling feathers, saying things that are generally taboo.

__DJE:__ A core belief of mine is the importance of honesty. When we stop talking openly about sex, we stop communicating important information to our young people. Then you have worse reproductive health, more teenage pregnancy, higher rates of HIV/AIDS.

__RLM:__ Do you think that we have gotten better at talking about sex since you held public office?

__DJE:__ I think that we have made a lot of progress. But you know, it took thousands of years to get here. Can you imagine that in 1960 it was illegal for married people to use condoms?

__DJE:__ (3) made it impossible to educate women about their sexuality. These laws effectively kept women barefoot, pregnant, and in the kitchen. there is no question that women of color suffered the most. It’s because they tended to have less education. They tended to have less resources, less access. And if you can’t control your reproduction, you can’t control your life.

__RLM:__ I read that you used to have a condom tree on your desk in your government office.

__DJE:__ That’s right! I did! Someone made it for me, and it was wonderful. If everybody who needed a condom would use it, we would have far less disease, far fewer unplanned pregnancies, far less HIV and other sexually transmitted diseases. When people protest and say that no birth control is without fault, I remind them: “The vows of abstinence break far more easily than those latex condoms.”

__RLM:__ I imagine that the people coming into your government office were not really people who needed free condoms.

__RLM:__ With the ongoing arguments about health care and reproductive rights, as well as Attorney General Jeff Sessions’s retrograde attitude toward marijuana, it almost seems like we’re having the exact same conversations that occupied your time as surgeon general.

__DJE:__ We really are going over the same things. I often think about this elderly white lawyer in Arkansas. He was in the Senate when I worked in state government. He disagreed with almost everything I did. Later, he came to me and said, “Doctor, if we had listened to you, we wouldn’t be in the trouble we are in right now. Now I realize you were right. But we were so busy getting reelected, we lost track of what’s right.”

The same things keep going around, and around, and around. I wasn’t the first, nor the last, health professional to take on these challenges. Because of marijuana, we have become the world’s biggest jailer. We have criminalized a generation of young people for nothing, and the less educated and poor. If you look at the social determinants of health, the thing that improves health the most, absolutely, is education. (4).

__RLM:__ You’re saying that by investing in prisons and not education, then we are basically keeping people sick.

__RLM:__ I know a lot of people feel pretty disempowered right now. When I think about all the work that is not being done — or being undone — in the fields of women’s reproductive rights, public health, and prison reform, it’s hard not to feel heavy dread, if not full-on despair. How do you see the way forward?

__DJE:__ We’ve got to decide what we want. What kind of structure are we building? Do we want a bridge that does nothing to support itself, that will fall in a bad storm? I think not. We want more than that. We want to be ready to carry the heaviest loads. We need to do more than the bare minimum. The bridge has to be strong enough to weather the major storms.

I think the first thing we do is educate our people. It’s not a quick fix, but if we start early, when people are young, it can make a difference. If you start out behind, you stay behind. It’s going to take a commitment from all of us. We can’t feel that “Well, if they don’t live under my roof, they don’t eat at my table, they don’t sleep in my bed, it’s not my problem.” It is your problem. It’s all of our problem. We’ve got to accept that all of our needs are all our problem if we are going to make this a healthier society. We’ve got to work to make sure that all people have health care. It should be a basic human right.

I really am an optimist. We have bad days, but I really am optimistic, and I really feel that our power brokers are going to wake up and do what it takes to makes a difference.

__DJE:__ I love talking to young people. Thank you for calling me.

This interview has been condensed and edited.

*Rose Lichter-Marck is a writer living in Brooklyn. She also takes pictures, some of which are posted (5). You can find her on (6).*