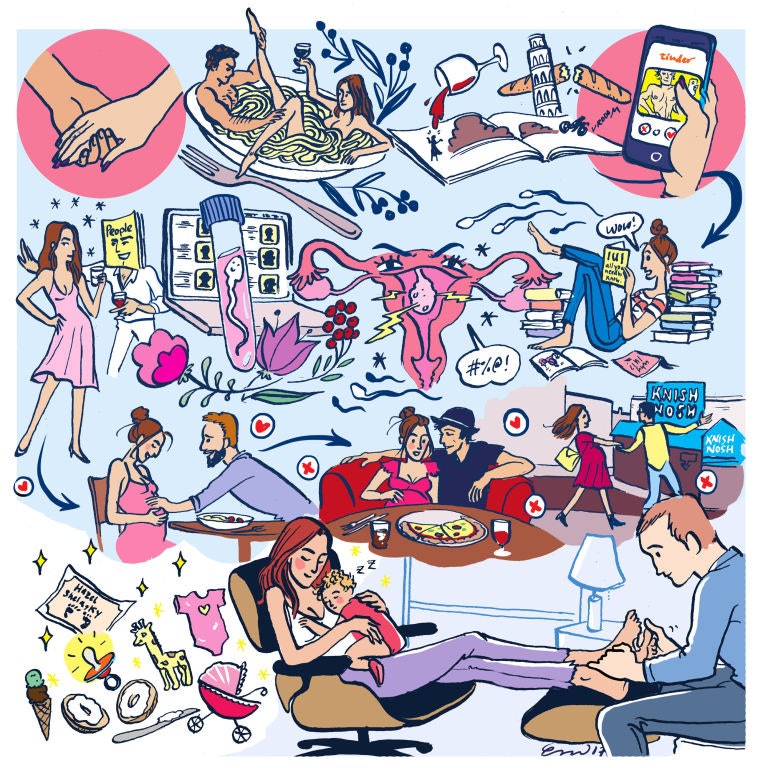 *Lifestyle writer and single mom Alyssa Shelasky is raising a two-year-old – and dating at the same time, just like Bridgette Bird in the new SHOWTIME comedy series, SMILF. Based on a Sundance award-winning short film, SMILF takes a hilarious and unabashedly honest look at the life of Bridgette, a twentysomething single mom from South Boston as she navigates dating, sex, and a career, all while raising a tiny human. SMILF is loosely based on the life of series creator Frankie Shaw.*

Even when I was seven, I knew that shit was stupid.

I know. It’s a lot. And that’s exactly what I wanted out of life — a lot. I had a reckless heart, a wild soul, and an infinite passion for art and humanity and any boy with long hair, divorced parents, and inner depth. On my seventeenth birthday, I lost my virginity on a kibbutz with a complicated kid I had been madly in love with for years. It went on all night long, and I enjoyed every second of the experience. I’ve always attributed my healthy relationship with sex to that cosmic night.

And so it went. Off-the-charts chemistry with on-the-fringe men basically defined all my long-term relationships. I was comfortable with this construction. I savored the challenge of seducing, then taming, these artists and outlaws. And I loved the way they kissed.

Three years ago, I was in New York, recovering from what I swore would be my last bad breakup. This one was with a gritty Roman who had swept me away to Italy with the promise of, among other things, little Brooklyn-Roman bambinos. A year later, he decided his true calling was to ride motorcycles and live in India and not be with me. He wanted yurts and skirts and I wanted labor pains and lullabies, and suddenly our burning love was burned to the ground.

That’s how it always ended.

Because despite my taste in such difficult men, I always wanted to be a mother. This has been my most defining truth in life. After the Roman, I was overwhelmingly ready. It felt dead wrong to wait for a man’s permission to get pregnant. I was done with it all.

So I decided to pursue motherhood with every bone in my body and every buck in my bank account. I met with the most beautiful and affirming Single Moms by Choice; I read every book and blog on the donor decision.It felt thrilling and joyful and profoundly right.

The day I officially decided to move forward with the process — locked in the IUI appointment, narrowed down the donor — the Sexiest Man Alive (literally, *People Magazine* once named him this) flirted with me at a party. This was after I told him I’d been browsing sperm all day and that my “shop was closed” for a while. He asked for my number. I asked if he knew Colin Farrell.

Forgive the star-fuckery. I’m just trying to illustrate how the universe took care of me once I took control of my own destiny.

Famous Guy was the first of many lovely men to ask me out despite the fact that I was about to be, and then became, fully pregnant. Dating was hardly at the top of my priority list, but the dalliances were easy, fun, and feather-light, which was so refreshing after years of intense relationships.

While pregnant, I went out with a sweet single dad who delighted in talking freely about raising children and got me even more psyched about the creature kicking inside. I dated a super-open, super-primal musician who wanted to know every detail of my sweaty and robust parts. I dated a brainy trust-funder who took me on epic knish taste-tests and chocolate-cake crawls and whom I now realize was an obsessive-compulsive overeater.

Back in real life, though the furthest I got was a messy make-out with a fascinating Jesus freak, I definitely felt desired and admired by all these gentlemen callers. And hey, great.

On October 3, 2015, I had my daughter, Hazel Delilah Shelasky. My dad was the first to hold her. I was exhausted but never scared. She is poetry and religion and the moon and the stars, and my life is beautiful forever because I have her.

(Now is a good time to mention that I am a privileged single mom. My parents and sister helped me every single day. They were my babysitters, my emotional support system, and the source of Hazel’s swagger. I had consistent work that always paid the bills and successful friends who gave us cashmere onesies and weekend escapes. Also, don’t forget, I wanted to be a single mom. It was a lifestyle I was prepared and excited for.)

With all that said, plus the scientific fact that babies bring love and luck, it wasn’t too surprising that dating with an infant was actually kind of a blast. A glass of Pinot Noir, a splash of sexual tension — it was just enough to balance the diapers and sleep-deprivation. What’s more, I didn’t necessarily want or need a man — which, of course, meant they were everywhere.

The first guy I went out with, now that I was somebody’s mother, knew we were on a tight schedule. In other words, that we had two and a half hours before my mammaries would explode with milk. We laughed about that. Then he gave me a small present for Hazel, which I found so touching that it made me cry. He wasn’t my soul mate, but I felt more vulnerable on that date than I ever had. And I liked it.

After that, I dated a few more funny, sweet, and handsome men in various pursuits of family. Obviously, not everyone was amazing, but my situation weeded out the bigger jerks and helped me refine my romantic qualifications too.

In the past, dating was a purely visceral experience. Either I desired them, or I didn’t. Within seconds, my body always knew, and from that point on, I would be insatiable. Now that I had a baby, there was a slight change in the system. Though it still reigned queen, lust was not enough. I also required stability, maturity, and dependability. There was zero time or energy for anything less.

I met S when my daughter was seven months old. I brought her on our third date, and the three of us have stuck together ever since. He’s a filmmaker and an adult and the real Sexiest Man Alive as far as I’m concerned. This spring, it will be two years. We live together. I never want to get engaged or married, but I love sharing a life so much that it’s embarrassing.

I often ask S two ridiculous questions. The first is: Who do you love more, me or Hazel? He won’t answer. But I’m pretty sure it’s her — and I kinda live for that. The other is: Why did you like me on our first date? He says it’s because he walked into the restaurant and saw rays of sunshine glimmering around my being.

And he’s right. I felt radiant that day. But it had nothing to do with me. It was all because of her.

*Alyssa Shelasky is a writer for *New York, InStyle, Bon Appétit, Travel & Leisure*, and more. She is the author of *Apron Anxiety, My Messy Affairs In and Out of the Kitchen.* She is currently developing a scripted television show about her life with Hazel.*