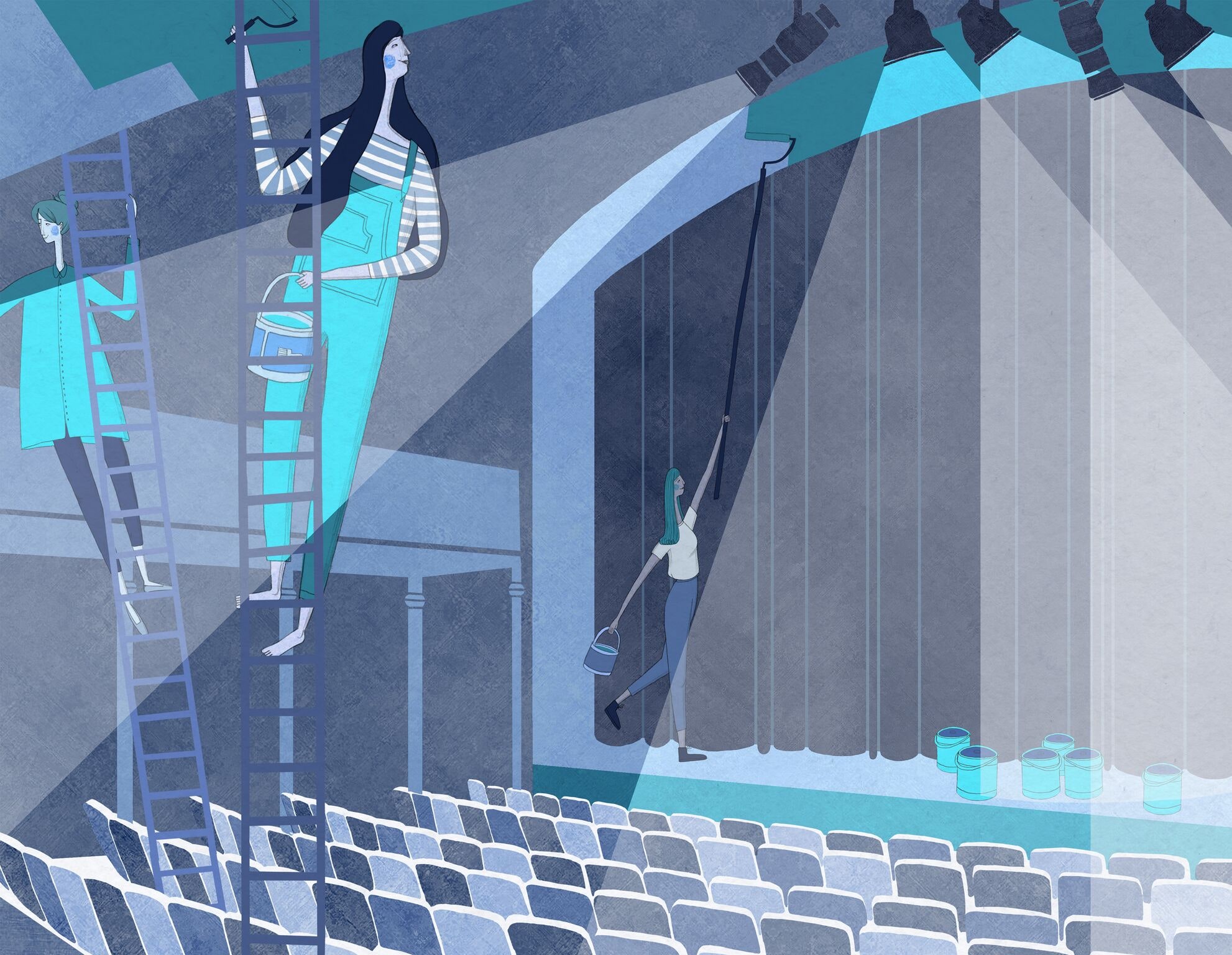 I’m backstage shellacking dog shit 30 minutes before opening night of a play called _A Dog’s House._ I’m trying to finesse a mixture of peanut butter and Hershey’s syrup into perfect poop piles while constantly finger-poking it to check if the shellac is hardening. I look at my best girlfriend of 15 years and we burst into laughter. How did we get here?

Nine years ago, I moved to Los Angeles from New York City. My roots are in Long Island. I hated sunshine and shorts and sand (still do). I was the worst driver ever, and my family feared for me and for the other drivers sharing the road with me (still do). But I got it in my head that, in L.A., I might waitress less and act more. That, and my girls from drama school, my Ride or Dies, were slowly but surely moving to California. Together.

My friends and I have been through some SHIT. Painful breakups; being flat-ass broke; changing jobs a million times; changing apartments a million times; deaths and funerals and weddings and bachelorette weekends; all the ups and downs that go along with growing up. It’s their phone calls that I’ll take in the middle of the night along with my immediate family’s.

We met in 2000 in New York, where we rolled around on the floor and made theatre at NYU. We studied abroad together at the Royal Academy of Dramatic Arts and took London by storm (in our minds, at least). We might as well have been royalty the way we took over the secret downstairs dance floor at our local club-pub, O-Bar. We drank, met British men, and danced our asses off. (Side note: When we dance we go hard — it’s full-blown interpretive dance mixed with the Butterfly and _Footloose_ .)

There’s Stefy; she’s smart, opinionated, strong, loyal as hell, and her laugh is instant medicine. There’s Laila, fierce, intense, and moves like a cat. LayLay runs into life like it’s a huge wave coming at her head. There’s Sarah Utterback, whom we call Slutterback, which is ridiculous and I don’t think she likes it anymore. Sorry, Slutterback! She is spiritual, deep, and artistic, and her air guitar is one of life’s greatest joys. And then there’s Amy; I call her Wifey. She’s spastic and quick-witted. We talk very fast and very loud and finish each other’s sentences.

This is how we ended up in L.A. en masse: one of us got a job at a restaurant in Hollywood, then hooked up the rest of us with jobs at the same restaurant. It was all coming together. As we took power-lunch orders from the most successful people in the biz, we complained, gossiped, daydreamed, and took turns saying, _What the fuck are we doing with our lives? Why are we in Hollywood?_ _What-the-what are these web series people are making?_ We didn’t own a camera or know how to use one; all we knew was how to make cheap, guerilla-style theatre. And that’s when it hit us. Lets do a PLAY! In L.A.! A town where TV and movies thrive and hardly anyone gives a rat’s ass about theatre! The perfect plan.

Our first play was fucking terrible. It was 30 minutes. Which, let’s be honest, is more of a one-act than a full-length play. It was about random people on a subway. Telling subway stories in L.A.: again, perfect plan. But we loved doing it. Every second of it. It gave us a reason to get up in the morning (other than waitressing brunch). We felt empowered, and for the first time, we weren’t waiting for the phone to ring. We didn’t have time to. And we were together.

We were able to make a teensy bit of profit from the box office and put it into our next play, _Cinephilia,_ a play about cinephiles who communicate through movie quotes. It was the first in a series called _The Seven Deadly Plays_ . This became our business model: keep tickets cheap so friends could come, and make a little profit to keep going. These plays were our lifesavers. Our baby artist souls were dying a slow waitress death with every order placed of house-cured salmon Benedict. Together, it was time to make a change.

One night we sat around drunk, as we often did. And we came up with the name IAMA Theatre Company. It doesn’t stand for anything. It’s just like I AM A Theatre Company. Get it? Like I said, drunk. Most theatre companies don’t make it through their first few years. They usually implode rather dramatically. In fact, we formed at the same time as a few other companies that no longer exist. So when I look back at IAMA’s infant years, I credit my Ride or Dies and our strong friendships with why we survived.

> This became our business model: keep tickets cheap so friends could come, and make a little profit to keep going. These plays were our lifesavers. Our baby artist souls were dying a slow waitress death with every order placed of house-cured salmon Benedict.

You see, no one decorates a lobby like Laila, no one can keep money in the bank like Amy, no one gets asses in seats like Stef, and no one knows good theatre like Slutterback. And we were egoless and fair. For example, when Laila and Stef were leads in a play called _Bachelorette,_ a dark comedy about a debaucherous bachelorette party _,_ I produced it and Amy ran around town collecting props. And when Sarah and I got to be leads in _The Accidental Blonde,_ a play about friendship gone sour with jealousy, Stef ran lights and Laila ran the box office. We were drawn to one another in school because we were hard workers. Even now, when we call all hands on deck to paint the entire theatre, I know who’ll show up at midnight to get it done. We don’t let each other down. Not an option. We became entrepreneurs. We eventually collected other soul-sister artists and yes, even some dudes. One of them, my now-husband, then-boyfriend-I-wasn’t-totally-sure-about, designed a sick website for IAMA, and he could act, so he was in!

Like any other theatre company, our experience hasn’t been without drama. At times, there has been as much drama offstage as onstage. Breakups, makeups, make-outs, blow-outs — but it all adds to why we love making art together. We share history. I am proud to say that, since our start, we have stuck by our mission statement: we remain a home for playwrights to develop new ideas.

I’m now co–artistic director. We have moved plays to Off Broadway and all over the world. Two plays written by our longtime friend and collaborator Leslye Headland — _Bachelorette_ and _Assistance_ — went on to be made into a film and a pilot. Last year we won L.A.’s Ovation Award for Best Production of a Play for our L.A. premiere of Jon Caren’s _The Recommendation,_ which is about race, class, and the limits of loyalty. And just FYI, we had a budget of some paint and some wood, and we were nominated against the same big dogs we used to serve brunch to. How you like them mimosas?

My magical place is sitting in a 70-seat theatre on an IAMA opening night. Getting to watch my girls (both originals and newbies), as well as the guys, affect an audience with work we made together. Last year, I was lucky enough to play a role in the aforementioned world premiere of _A Dog’s House,_ a play about a violent dog that drives a couple apart. I shared the part with Wifey. It was tech week, the predictably hellish nightmare of moving a play into the theatre, setting the lights and sound, and having clunky run-throughs. So, naturally, we were stressed the F out. I was literally running from _Scandal_ (on which I play Quinn Perkins, Olivia Pope’s Ride or Die) to our crappy theatre, the house was about to open, and we hadn’t finished making the dog-shit prop for the last scene in the play. There we were: exhausted, running lines, shellacking fake dog turds, and I thought to myself: _This is what makes me happiest._ Making theatre in Hollywood with my friends. Because together, we really do have it all. Except for the programs for tonight’s performance. Which reminds me, I gotta go pick those up.

_Katie Lowes is an actress, a producer, and the co–artistic director of_ (1) _in Los Angeles._