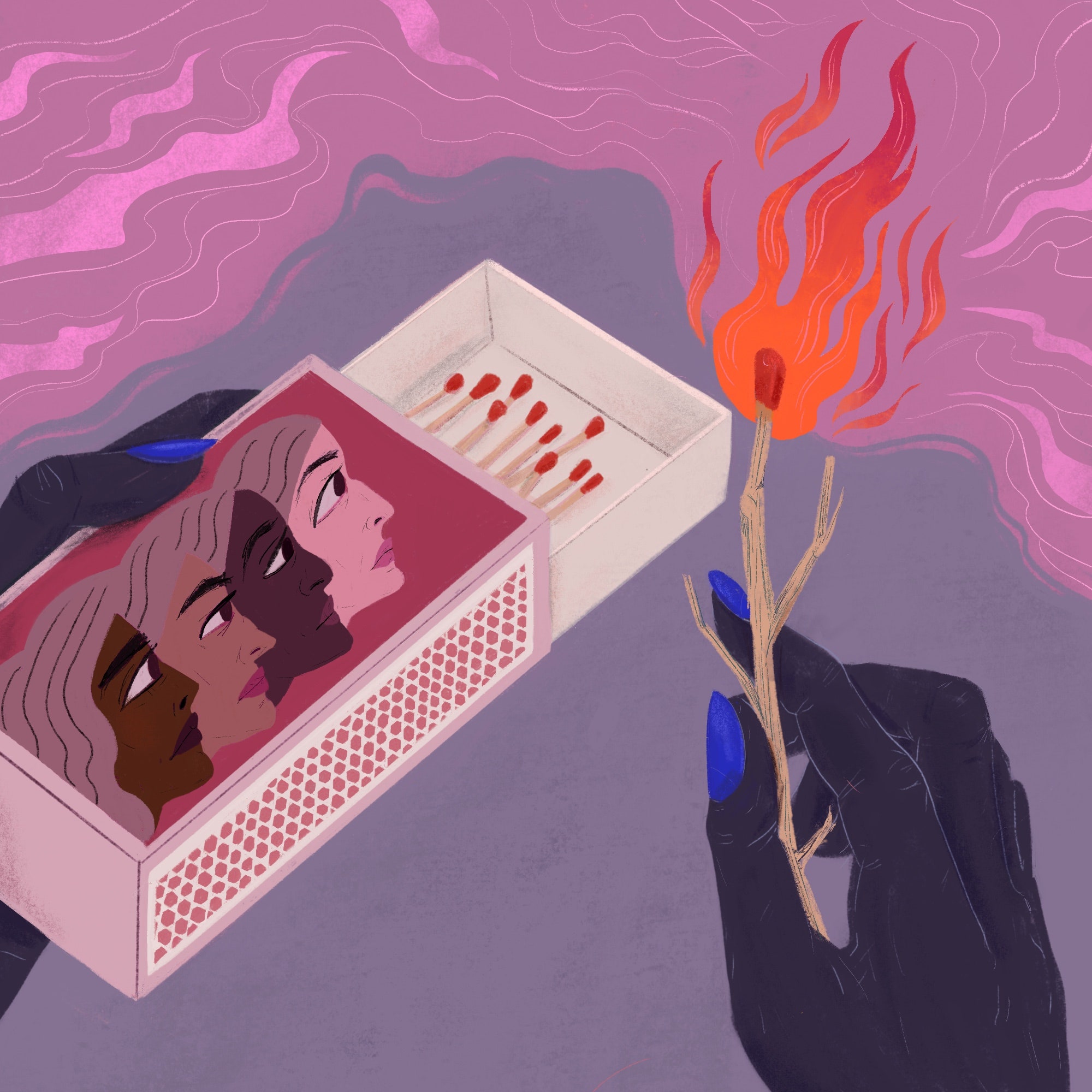 Tameka* was a high school student who was enrolled in one of those special programs for delinquent students. She’d arrive at noon and leave by three and would be on campus with no books and no backpack. Tameka had only a pencil in one hand and three sheets of folded paper in the other. All of it — school and these instruments — was a weighty load for her to carry.

I was an eleventh-grader with a different kind of load. I carried my life in my backpack — 25 extra pounds of textbooks, notepads, pencils, tampons, snacks, and my stories — all on my shoulders, already weighing on me. And on Fridays and after school, we’d lose those burdens and dance in the outdoor lunch area together. Always hip-hop, always jumping and swirling, rolling and pop-locking, our scrunchied ponytails swinging in brush strokes, painting musical notes in the air.

So I was surprised to see Tameka one Tuesday morning at 7 a.m. I had arrived early for basketball practice and found her walking through our dance space, carrying a large tree branch. “Hey, Meka,” I said.

She seemed extraordinarily happy to see me, hugs and smiles, a departure from the serious expressions we’d make during our dance-offs, when we’d talk to each other saying, “Gurl, this …” and “Gurl, that …” We were from the suburbs and learned how to speak that way from watching the movie *New Jack City*, the same way the white kids had.

Tameka told me she was looking for Darnell. Saying his name made her suddenly angry. That’s when I noticed her gold hoop earrings were already taken off and her braids were pulled back into her dance-off ponytail. She said, “Grab a stick and come with us.”

When she said *us*, Heather and Kristy came from another part of the lunch area and joined us there — Heather, a redhead, and Kristy, a blonde. They had already picked out their own large sticks.

“Coach?” I said. Darnell was often getting expelled and suspended, fighting and bullying people, but Mr. L was the track coach and people liked him — students and faculty. He was one of the most popular and dedicated teachers at the high school. He’d take students home from school when their parents no-showed or were coming too late from work. None of us ever had to sit alone in the dark waiting to be picked up.

“Here,” Tameka said, “take my stick. I’ll find another one.” I held her tree branch loosely in my hand as she searched the dry patches next to the lunch area.

I waited for her, bounced my backpack higher over my shoulders. “You’re seriously going to beat down Coach?” I said.

“And Darnell,” she said. “He messed with Kristy’s sister.”

“Shouldn’t we just tell the school dean? I can tell my counselor, Ms. B.”

“Does that mean you’re not coming?” Tameka said. Her expression transformed into her dance-off mask.

“I have to go to practice,” I said, handing back her branch, foreseeing a consequence to my own safety elsewhere, but I didn’t say that. Instead, I said, “I don’t want to get dropped from the team.”

“Come on,” she told the others. “Let’s wait for them on the track field. They both go that way from the parking lot.”

After that day, I didn’t see any of them for months. Darnell I saw the next day, his eye bruised, his elbows scraped, still talking mess to everybody, especially intimidating the girls with what he thought were gifts to us: promises and stories about the feats of his penis.

As for Mr. L, I heard through the grapevine that a complaint had been filed against him by a student I hadn’t met and that he had claimed his accusers were liars, problem children, and whores, and a few had tried to attack him in the parking lot. Those students were expelled, and Mr. L went back to work. I’d go on to transfer schools and graduate. And I no longer wonder what happened to the men in this story.

I wonder about the women.

Including those like me, who never spoke up back then. I think about how he asked me to watch him touch himself. “Just watch,” he said.

I think about Tameka and Kristy, who my other school friends have not seen in twenty years. I want to find them and applaud them for using what they had to defend themselves and other women. I don’t support physical violence. That’s not what I mean. I support self-defense and these women who fought back after being victimized, who were ignored by school officials, by family and even friends, and who used one of the tools at their disposal when their voices were not enough.

As women, wherever we are, we all have something available to us — a tool or talents as unique as each of us are, and a voice and a time to use it … even if that time is not in line with others, even when there is no trending hashtag. Take care of yourself and be safe.

And we must claim our strengths with boldness and choose our talents as tools and nurture them. For me, those talents include creative writing, parenting, teaching, and my faith. I list faith as a talent because faith, too, is a choice. One that requires imagination, like artistry. And all good artistry, no matter how bizarre, conveys the truth. Oprah once said that truth is our most powerful tool.

The courage to risk the little we have or use the little we find — like a fallen branch — in order to effect positive change. The news about Harvey Weinstein had just broken when I was in was in the mountains of Northern California with Buddhists. Tameka and Kristy were in the back of my mind then, and the idea for *Drunk Girls Bible Study* podcast came to me. It was such a small thing, I thought, a podcast, like a tear in the ocean. But I had a revelation or, some might say, a dream — mine tend to move me.

In the dream, I was in my writing room, and there with me was my good friend Shaherah White, who is the daughter of the late, great Barry White, and there, also, was Angelique Ehat, a veteran women’s church leader.

I hardly knew Angelique then. I had seen her at church functions, heard her speak once — four years earlier — but for over a year, few people had seen her. After more than twenty years in church ministry, she had disappeared and gone into seclusion like Yoda.

I was shaking when I called her but felt encouraged by the yes I’d gotten from Shaherah, who said, “Real talk about the Bible? Hell yes! You have to call Angelique!” So when Angelique picked up the phone, I told her about this dream and that I knew it sounded insane, but I was going to transform my writing room for a podcast, and *Drunk Girls Bible Study* was going to be riotous and not religious, a place of empowerment for women.

For *all* women, Christian or not, a place to have conversations about faith and womanhood based on Biblical principles and stories. A place to rebuild each other, to encourage each other, to stand, to pray, to act, to lay our burdens down like the site of an after-school dance-off.

She said, “I think this is the call I’ve been waiting for.”

**Names have been changed, because ultimately it is their story to tell. Like yours is yours. I am only carrying a puzzle piece that I lay down now to honor the legacy they left, and also to honor our strong high school students around the nation who are, right now, deciding to no longer tolerate the violence against their bodies (or perpetrate it). I hear you and am so proud of you*.

*Natashia Deón is an NAACP Image Award Nominee and the author of the critically acclaimed novel* GRACE, *which was named a top book of 2016 by the* New York Times *and won the 2017 American Library Association’s Black Caucus Award for Best Debut Fiction*. GRACE *is available in paperback now, and you can subscribe to* Drunk Girls Bible Study o*n (2) or (1).*