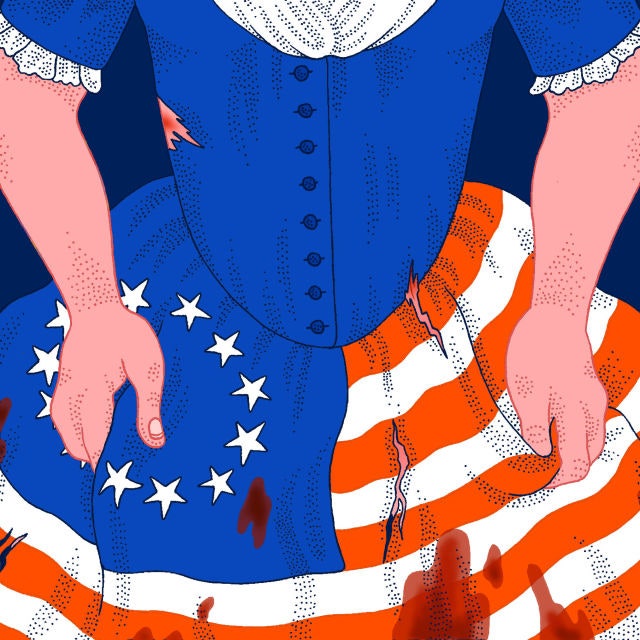 *In this column, Alexis Coe, Lenny’s historian at large, will conduct Q&As with specialists in archives across the country, focusing on one primary source. For this post, Alexis spoke with (1), author of* Scars of Independence: America’s Violent Birth*, about the deposition of Abigail Palmer, a teenager who, alongside two friends and a pregnant relative, was sexually assaulted by British soldiers during the Revolutionary War.*

**Alexis Coe:** I recently heard you discuss your new book, (2), in which you “write the violence back into the Revolution.” That includes violence against women, which isn’t the narrative we normally hear about this war. Since then, I’ve thought about Abigail Palmer, a teenage girl who was, along with two friends and a pregnant relative, raped by soldiers. What happened to her?

**Holger Hoock:** Abigail Palmer was a thirteen-year-old girl. One day in December 1776, she had been at the house of her grandfather, Edmund Palmer, a farmer near Pennington, New Jersey. British soldiers straying from a nearby camp took control of the premises. For three days, several soldiers raped Abigail, her teenage friends, Elizabeth and Sarah Cain, and her aunt, Mary Phillips. In a war not short of atrocities on all sides, this stands out as a horrific, harrowing ordeal endured by girls and women who, as far as we know, played no active part in the conflict.

**AC:** So there’s no evidence to suggest that any of the women were Revolutionary spies? Was Abigail’s grandfather involved with the Patriot cause, or sympathetic?

**HH:** There’s no evidence that these particular women were spies, or couriers, or otherwise actively aided the American war effort. The family does not seem to have been targeted for their allegiances. This was a crime of opportunity: soldiers roaming the environs of their camp came across the women at the Palmer residence and then abused them systematically.

**AC:** Were there any male relatives on the farm, or were the women alone?

**HH:** Abigail’s grandfather was at the house at the time and attempted to shield her and Elizabeth Cain when several soldiers “pull’d them both into a Room” –– but, ignoring their screams, they “Ravishd them both.” The families of raped American women often pointed out that British soldiers maximized the humiliating and demoralizing impact of their attacks by assaulting women in front of their fathers, husbands, and other close relatives. Assaults on the honor of American men who failed to protect their vulnerable women seemed as critical as defeat on the battlefield.

**AC:** Did the women or Abigail’s grandfather go to the authorities on their own, or was she encouraged to do so?

**HH:** Neither, actually. Like most women raped by soldiers, Abigail had no chance to charge her assailants or seek justice in an American court. A few rape victims courageously visited the HQ of the occupying British forces to demand that their attackers be identified and tried. And at a time when tolerance of sexual violence was very high in the British army, officers did actually prosecute some rape cases: courts-martial sentenced several soldiers to execution by hanging. Abigail was in fact sought out by America’s new leaders to tell her story. These men –– and they were all men, of course –– would deploy Abigail’s story of personal suffering in their moral and propaganda war against the tyrannical British Empire.

**AC:** Who took Abigail’s deposition, and why?

**HH:** That winter, of 1776 to 1777, the Continental Congress had appointed a committee to investigate British war crimes. They were asked to document not just battlefield atrocities and prisoner abuse, but also the “lust and brutality of the soldiers in abusing of women.” America’s new leaders were acutely aware that rape would be “more difficult to prove than any of the rest as the person abused, as well as the Relations are generally reluctant against bringing matters of this kind into public Notice.” But George Washington identified specific New Jersey citizens who knew about rape cases, and a local justice of the peace was able to depose six girls and women in the area –– including Abigail.

**AC:** Can you quote some of Abigail’s deposition? What’s stayed with you?

**HH:** Like all such depositions, Abigail’s testimony comes to us through the questioning and notation of a male official; Abigail signed with her mark: “x.” Abigail’s and her friends’ depositions detail both the physical assaults and the threats they endured. The British soldiers told Abigail “they would knock her Eyes out if she did not hold her Tongue.” They threatened to poison the girls, to run a bayonet through their hearts, and “to blow their brains out.” In the one-page document, several days of intermittent sexual violence by individual and groups of soldiers are summarized in a couple of sentences and matter-of-fact language. When two of the girls were eventually carried off to the British camp on the third day of their ordeal, Elizabeth remembered, “they was both Treated by some others of the Soldiers in the same Cruel manner.”

**AC:** And how did Patriots react to this kind of story versus, say, stories of prison atrocities? Was it a powerful tool?

**HH:** American reports on British atrocities powerfully turned the violated bodies of American men and women into moral assets for the Revolutionary cause. But one key difference between stories of rape on the one hand and atrocities against military men on the other was how the actual bodies were the focus of the investigation and description –– or not. The Revolutionaries documented in great forensic detail the specific number and nature of wounds in the bodies of dead and injured soldiers in the aftermath of a massacre. Similarly, they evoked the malnourished, diseased bodies of surviving POWs.

By contrast, investigations and propagandistic publications about rape downplayed physical details, unlike in civilian courts at the time, which gathered evidence of bruises, cuts, and other signs of resistance, and indications of recent sexual intercourse. And if a raped American woman testified at a British court-martial, she was asked whether her alleged assailant had penetrated her and ejaculated, to test the veracity of her accusations.

**AC:** The Revolutionary War is my era, too. My next book is on George Washington, so we’ve no doubt mined many of the same sources, but so much of what you’ve written about in *Scars of Independence* is new, or has never been emphasized. We learn that this was a bloody, long battle, of course, but mostly it’s a heroic tale of patriots who bravely rebelled against an oppressive empire in order to create what was considered, at the time, a utopia of sorts. What do you think that story says about our country, and how do you hope your work changes the conversation around the Revolution?

**HH:** Abigail Palmer’s story is just one of myriad examples of how the Revolution was a profoundly violent civil war in America and the British Empire that impacted not just combatants and captives but also civilians of all ages and sexes, free, enslaved, and indigenous. Conventional narratives, focused on the era’s ideals, fail to capture their ordeals. And the selective remembering, the whitewashing of violence, had set in right after the Revolution itself, as the Patriots wrote the American-on-American violence of America’s first civil war out of the story. Over time, even the Revolutionary-era emphasis on the blood that the Patriots themselves had shed in defense of their new nation –– and the sexual violation of their women –– yielded to a strangely bloodless narrative of the war.

Today, in our age of armed conflicts worldwide, of genocide, and debates about the nature of patriotism, Americans seem to cling to the Revolution as their last great romance with war. But, I would argue, it is precisely because we face an uncertain world of insurgencies, civil wars, and failed states that Americans should confront their own tumultuous origins and be alert to the potential pitfalls of pursuing moral objectives by violent means.