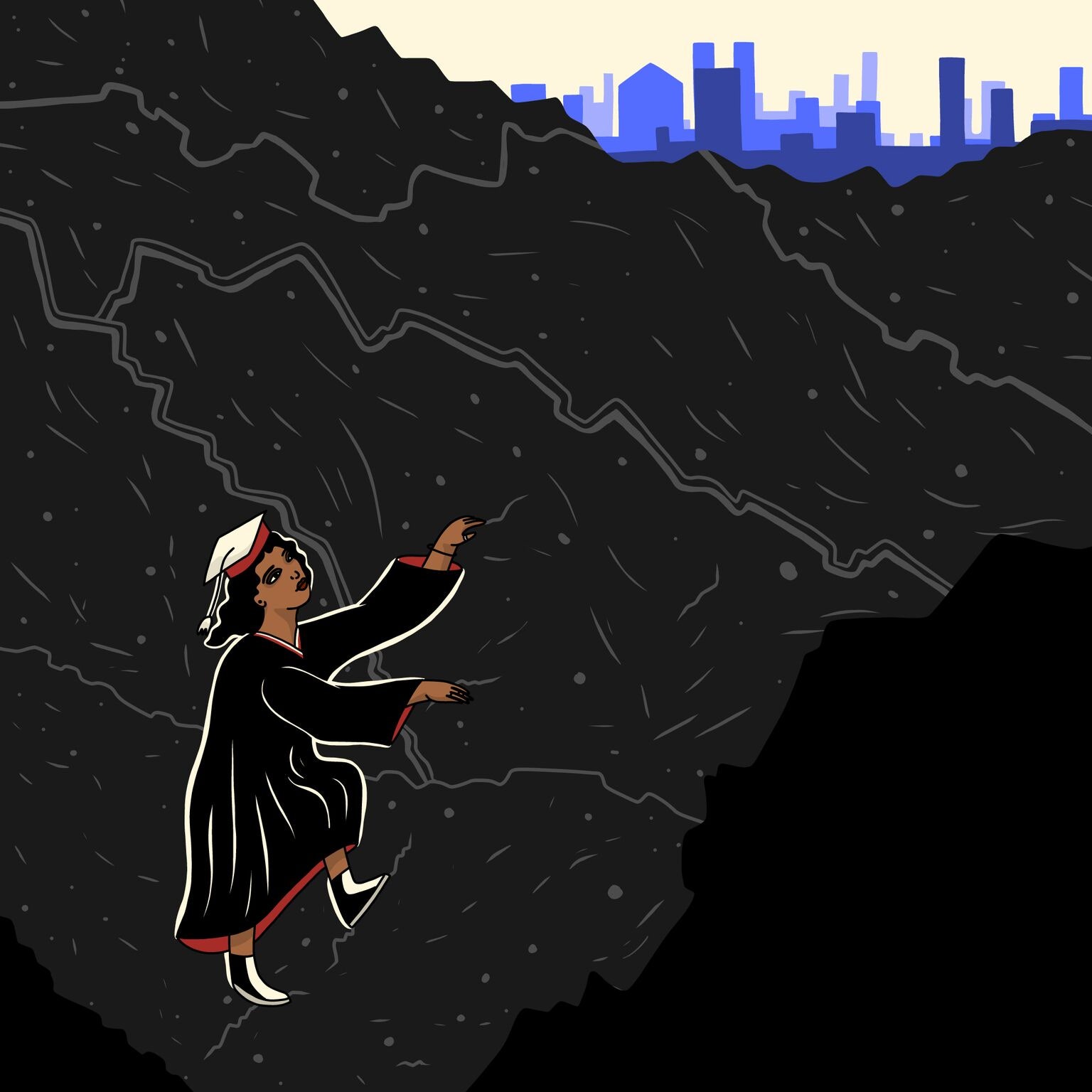 Men like Donald Trump come to power when their countries are already in deep trouble. And more than 100 days into his presidency, I’m hitting alarm buttons everywhere I can. But before we talk about how we fight back, let’s talk about how we got here.

I grew up in an America that invested in kids like me. My family didn’t have much. My daddy sold lawn mowers and fences, and he ended up as a maintenance man. When I was twelve, he had a heart attack. My parents knew what it was like living paycheck to paycheck, and when the paychecks stopped, our whole world turned upside down. Every night as I went to sleep, I listened to my mother crying in the next room. Finally, my mom, who was 50 years old, pulled on her best dress and her high heels and walked to the Sears to get a minimum-wage job answering the phone. She saved our home, and she saved our family. I learned early on about the deep-down fear that we could lose it all — and just how hard a woman could fight back. But my mom couldn’t have saved us without a minimum wage that actually provided enough for our family to live on.

I didn’t set out to be a senator. My own path had plenty of twists and turns. I loved my second-grade teacher, Mrs. Lee. She was wonderful, and when she told me I could be a teacher, too, I set my heart on it. I never let go of the dream. There was no money for college so I got a scholarship — but then I took a detour. At 19, I got married and dropped out of school. But I received a second chance: eventually I graduated from a commuter college in Texas that cost $50 a semester, and I reached that dream of becoming a teacher.

I’m the daughter of a janitor who became a professor at Harvard Law School and a United States senator — I’m the product of an opened door, and I’m grateful down to my toes. It was a set of policies that our country adopted that opened that door for me and for millions of others.

Today, it’s a different story. For far too many people, those kinds of opportunities have disappeared. Our country has stopped investing in its young people, and stories like mine have become rare over the past 35 years.

In my new book, _This Fight Is Our Fight,_ I talk about the long arc of America’s middle class from 1935 to the present. I split this arc into two sections: 1930 to 1980 and 1980 to today. From 1935 to 1980, Washington focused on strengthening the middle class and building opportunities for more and more people. Progressive taxation gave us a chance to invest in education, infrastructure, and basic research, and careful regulation meant we could level the playing field, creating opportunities for a lot of families — including mine. These progressive policies worked, and our country built the greatest middle class the world had ever seen. From 1935 to 1980, 90 percent of America received about 70 percent of all the income growth in this country. The pie got bigger, and everyone had more to eat.

> I’m the daughter of a janitor who became a professor at Harvard Law School and a United States senator — I’m the product of an opened door, and I’m grateful down to my toes.

Then came 1980. It was a turning point where we began to follow a very different approach. Ronald Reagan was elected president and, piece by piece, the policies in Washington, DC, took a sharp turn. Our financial markets were deregulated, and the big banks and Wall Street giants were turned loose to do pretty much whatever they wanted. Taxes were slashed for those at the top, and investments in education, infrastructure, and basic research shrank. And what were the consequences? The top 10 percent of this country received nearly _all_ the new income. The 90 percent — in other words, the huge majority of America — got zero. Zilch. Think about that: almost ALL of the income growth from 1980 to today has gone to the top 10 percent.

While I was writing the book, I met Kai, an energetic young woman with dreams about her future. She said she had been playing video games since as long as she could walk, and she was driven to build a great career in technology and visual arts. Neither of her parents had gone to college, and she was pretty much on her own to figure out what would be the right school. She got tangled up in the trap laid by for-profit schools. In my book, I pick her up when she is 27 years old, has no diploma, and is carrying $100,000 in debt. Kai lives with her sister and works as a waitress, putting every penny of her paycheck toward her massive debt. Her dreams are gone.

Young people have been dealt a terrible hand. Those like Kai who don’t make it through college have little chance of making it into the middle class. And those who do make it through college are often so swamped with debt that they begin their adult lives in a deep financial hole. There is no equivalent of a $50-a-semester second chance like I had. The failure to invest in education is trickle-down economics at its ugliest.

> I’ve got news for Donald Trump: up against our army, he doesn’t stand a chance.

The very first piece of legislation I introduced in the US Senate was to allow students to pay the same rate on their student loans as the big banks pay when they borrow from the government. It turns out that our government makes a profit on student loans. That is just plain wrong, and this legislation would change it. I got every Democratic senator to sign on and some Republicans, too, but not enough. In 2014, Republicans filibustered the bill, and I acknowledge the bitter truth that we’ll have to bide our time before we get enough votes and a president who is willing to sign it.

Policies made by government matter enormously. The interest rate on public loans? Set by elected officials. Tuition and fees, and how much a student needed to borrow to try to graduate, were heavily influenced by the level of funding received from the state and from the federal government — funding set by elected officials. America’s middle class is under assault because policies have shifted in Washington for 30-plus years to keep favoring those at the top and dumping on everyone else. And now President Trump is poised to deliver the knockout blow to our middle class.

That’s why we must fight back. Our democracy is not a machine that will run on its own. It needs everyone out there fighting for what we believe in. And here’s why: If elected officials don’t hear from women like you here at Lenny, then policies will be set by the people they do hear from. And, believe me, they hear plenty from corporate CEOs, Wall Street, giant corporations, and others who spend lots of money to make sure that their interests are heard. It’s your world, your future, that is on the line.

The good news is, we’re not alone. That was clear the day after Donald Trump was inaugurated. Millions of women (and men, and children) came to Washington — and to cities and towns across America and around the world — to raise our voices. I was at the Boston Women’s March, and what I saw was something people in dozens of towns and cities saw — we’ve got an army that’s tough, smart, and above all full of hope. And I’ve got news for Donald Trump: up against our army, he doesn’t stand a chance.

_Elizabeth Warren is the senior U.S. senator from Massachusetts. Her eleventh book,_ This Fight Is Our Fight, _is available now from Metropolitan Books._