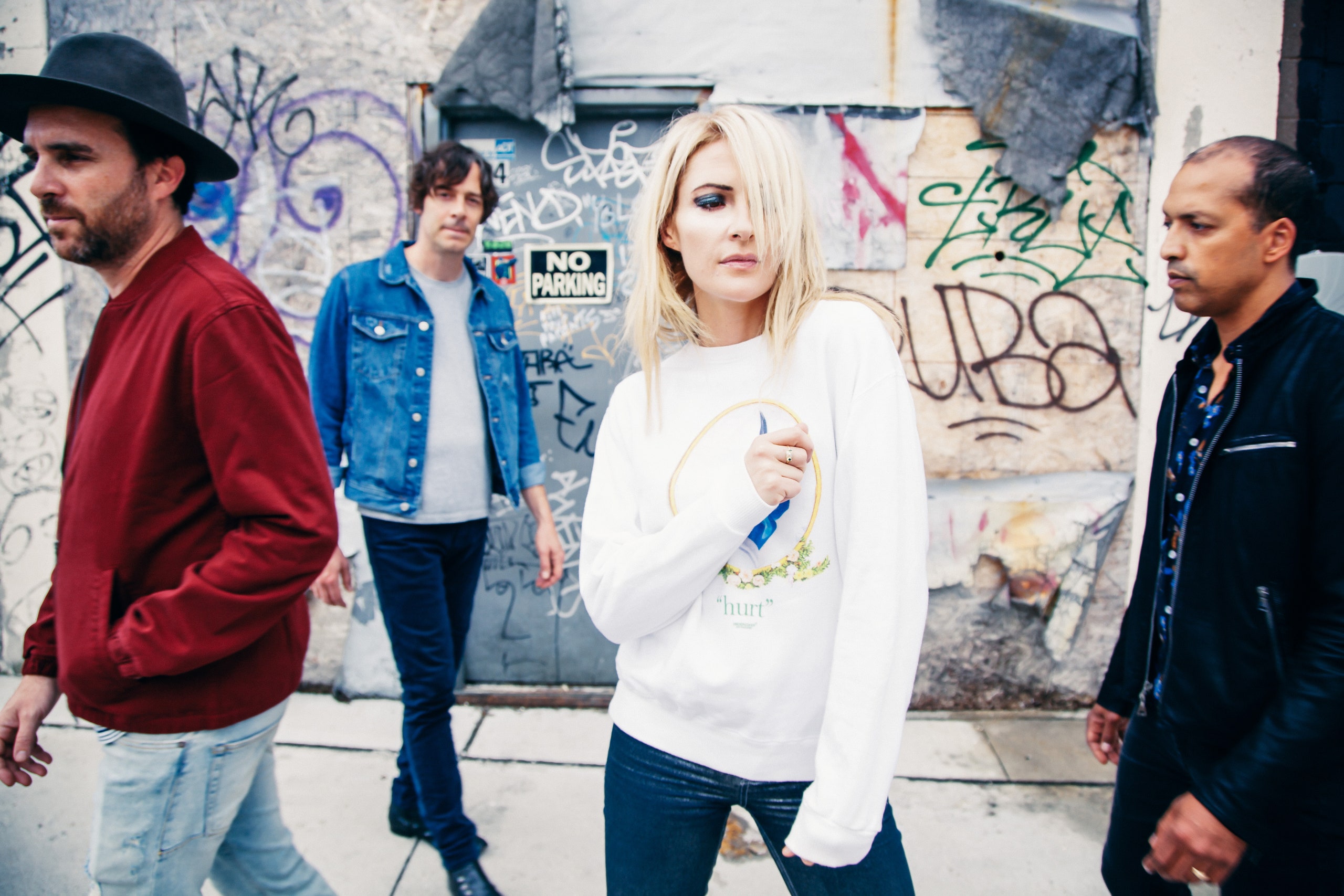 Emily Haines has spent her most formidable years as the lead singer in Metric, and she wouldn’t have it any other way. She founded the band in 1998 with her longtime friends Jimmy Shaw, Joshua Winstead, and Joules Scott-Key, and they are still going strong, touring constantly. They released their seventh studio album, *Art of Doubt*, last Friday, and the twelve tracks on it are driven by massive rock guitars and soaring synthesizers, but also by Haines’s vivid, poetic lyrics that tell the stories between the notes. Twenty years in, Haines could be forgiven for feeling nostalgic, but the album is anything but backward-looking.

I chatted with Haines while she was on the road—a place she’s very familiar with—after a night opening for the Smashing Pumpkins in Omaha, Nebraska. We talked about her band’s impressive longevity, Twitter wars, what is missing in pop culture these days, and, naturally, the wonder of rompers.

**Melissa Locker:** What do you feel you have learned over the last twenty years?

**Emily Haines:** Jim and I met in Toronto and then moved to New York with that cliché big-city-on-a-Greyhound-bus dream, and met Joshua and Joules. I find it astounding on a daily basis that this relationship between us could continue to evolve, not only musically but as a friendship. Every time I get to spend time with these guys, I feel like they’ve grown as people and there’s no stagnation. Some people have a trajectory of their life where they feel like they peaked at twenty and they are trying to get back to that. For whatever reason, all four of us have a different model for our lives. I look around and I’m like, *Yeah, I think we pretty much all look better than we did. We definitely have better clothes and a better style.* I think that every day you’re getting closer to the person that you want to be.

**EH:** The band is still very much actively our lives, particularly speaking for myself as a writer. I’m still very passionately subscribing to the belief that my role is to live things, push myself to have experiences that are maybe uncomfortable to put myself out in the world, write about it, make it, and craft it into a song that I then perform in front of thousands of people. It is a very different commitment than having something written for you or faking it or coming up with a persona. I can’t speak for anyone else, but for me, I feel like I’m still very much connected to the person I was when I started out on that mission—and I feel very lucky to get to do it, but it’s hard, especially right now. There isn’t really an environment right now for people, particularly rock music. Like, rock just feels pretty. It’s like rock music and the Democratic Party both need a revamp. The idea of carving out a life that’s fiercely independent and owning your originality and all of those values, I don’t totally see that in pop culture right now.

**ML:** What do you think is missing from pop culture right now?

**EH:** I’m just a bit lonely for other bands, a lot of bands have disappeared over the years. I think that the reason that Metric continues its drive is because we just suck it up. We’ve weathered massive changes in the industry, all while having our own little business that we’ve been able to keep afloat and employ a lot of people. I’m committed to something that is, I guess, my own path, but I wish that I could look around and see more contemporaries.

**ML:** The music industry has changed a lot in the last twenty years, but you and your band have carved out a niche with all your touring and your own label.

**EH:** I think it is partly because we are willing to put ourselves consistently in really challenging situations. Like, opening for Billy Corgan. This is a really, really intense tour that I’m on. It’s 38 days and getting up there and just saying, “Hi, we’re Metric,” at 7 p.m. So these are the kinds of things where we’ve consistently been, like, bring it on.

**ML:** The world has changed a lot since Metric started. I feel like music is playing such a different role for people right now because they need both escapism and people speaking out or saying what they can’t necessarily say otherwise. Do you feel like your role has changed with the political environment?

**EH:** I feel I went from being someone who was very outspoken and engaging in dialogue, political, social, and otherwise, at the beginning of my career—what we call the world before the iPhone—and now I just, I can’t. There’s no way that I’m gonna wade in to Twitter wars and purposefully inflammatory soundbites just to draw attention. To be completely honest, I completely self-censor now, and it makes me really sad. I don’t have the stomach for it. I’d say that’s a major change that I’ve seen. I feel I’m too scared. I don’t want to. I don’t have what it takes, if that’s what it takes to push the band more into the mainstream consciousness. I don’t want to dedicate my life to Twitter battles and stuff. It’s never going to happen. But it’s kind of sad, thinking that people might think I’m not trying hard enough because I’m not on Twitter fighting with people.

**ML:** I totally get that. It’s a protective measure when you sort of have to pick and choose where you’re going to wage your wars, and I don’t want to do it on Twitter.

**EH:** I’ll express my opinion and I’ll represent myself, but I’m sure you have plenty of examples of people who get undue attention based on Twitter. The irony is I love doing that as part of a live show. In the early days, Metric shows were super confrontational. But it’s a different environment, for sure. At the same time I don’t think that the world to the extent that they care about me or Metric is sad that I’m not spewing on Twitter. I think I’ve made my positions pretty clear in my life and my choices and the songs.

**ML:** At this point, you are kind of an elder stateswoman in the music industry. Do you have advice for younger women who might just be starting out?

**EH:** I really appreciate you saying that, because I feel like I had Kim Gordon and Hole and Laurie Anderson as sort of mentors, and it’s not even so much what they say but just recognizing something in their integrity that gives you the sense that you should continue to have integrity, too. So I really appreciate you saying that, but at the same time I feel like I am so unqualified to tell anyone anything. I’ve made very unusual choices, and if you feel like you have the stomach for, you know, pretty much sacrificing your whole life for what you believe in and what you want to do, then the reward is incredible. Still, on a daily basis you’re going to see people who’ve taken other paths seemingly fly above you. But if it’s what you want—your own music, your own company, control of your own time and your own life, and crafting yourself into a person throughout however long you get to live—you just have to be willing to work. It’s a lot of admin. It’s not sexy. My advice for young women or just anybody who is, you know, considering a life going after the thing that they want is you have to suck it up, and you’re not going to feel glamorous all the time.

**ML:** Have you picked up any survival tips from being on the road so much?

**EH:** I have adopted a serious relationship with rompers. You know how “sophisticated” working women have a job that goes from day till night? Well, mine is from night till day, so I can put on a pair of heels and a good pair of sunglasses with a romper that I definitely slept in, and I look pretty presentable.

*Melissa Locker is a writer and world-renowned assignment juggler in New York City.*