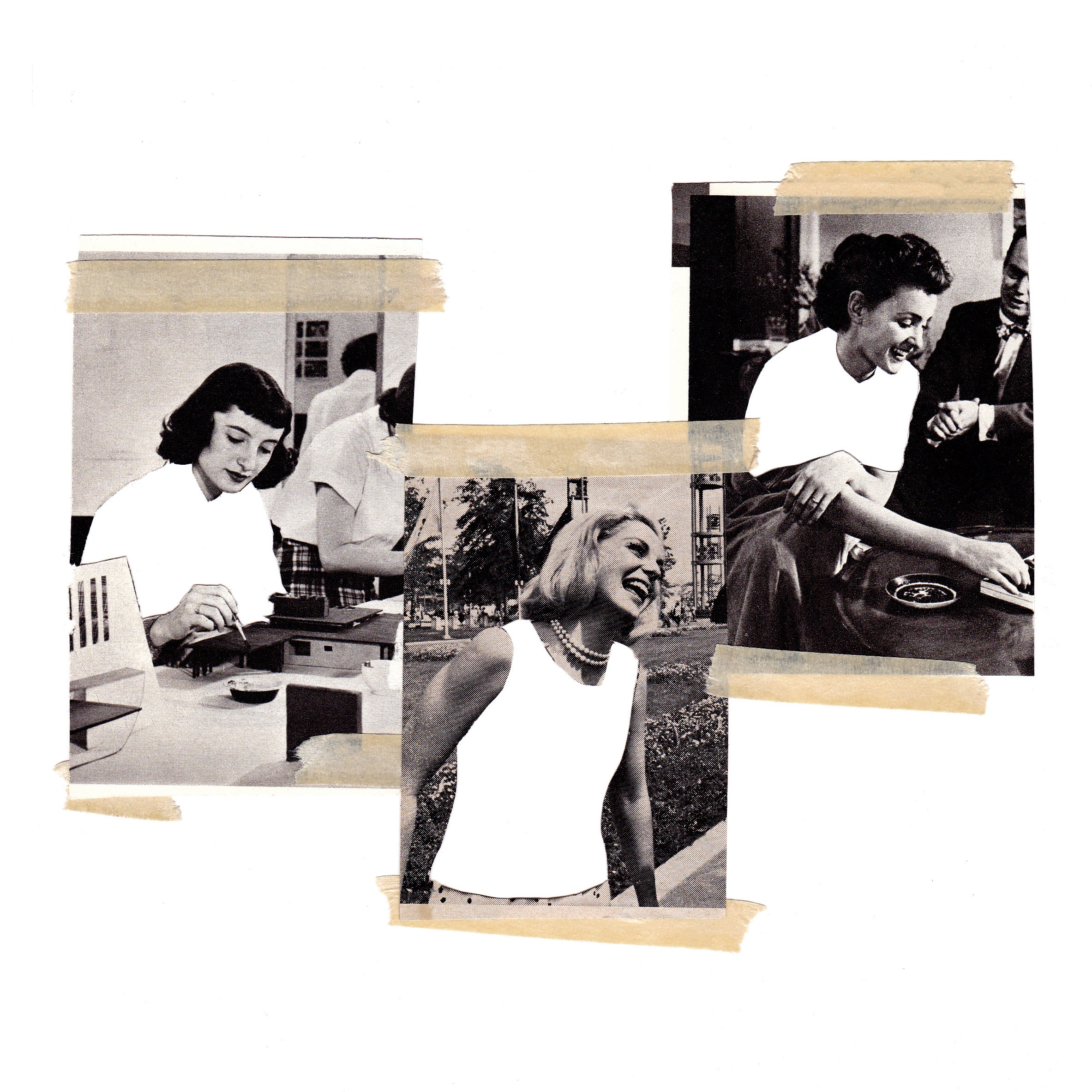 The entire arrangement is rather foolish. To lend a beloved item — one that you’d never, in reality, really want to leave your sight — in exchange for the blind trust that a friend will return it in pristine condition, or even at all. Yet the rotating act of borrowing and lending clothing is a rite of passage for any enduring relationship between best friends, sisters, and mothers and daughters.

For me, there are too many instances to remember: a pair of knee-high leather boots I lent to my college roommate, which complemented her body-con American Apparel dress perfectly (it was 2008) and came back with the heels worn away at a slant. Gold hoops that I let my best friend borrow to spruce up her outfit at a house party, which I still see on her ears every time we go out but have never come back into my possession. A Budweiser denim vest that same best friend left at my house, which has now become mine. A hunter-green trench I took from my mom’s closet a few Christmases ago that I always get compliments on.

This hodgepodge of shuffled clothing is less about possession and more about intimacy. Like the power of physical touch between friends and loved ones, being outfitted in their clothing or wearing their most cherished accessories is a form of comforting love, too. The smells and wear and tear they’ve left behind. The shared memories — good and bad — you create through the exchange of an object. The involuntary act of detachment from your possessions. The simultaneous joy and jealousy that something you bought for yourself might be better suited for your best friend, or sister, or daughter. And the unconditional love you have for them after you realize you’re probably not ever getting your jacket or your handbag or your sweater back — but you know that it’s gone to a good home to live a new life.

Here, seven women share stories about some of their closest relationships and the act of borrowing and lending clothes.

I was going to the *Vanity Fair* Oscar party. I picked out a dress, but I still didn’t have a handbag. A friend of mine said, “I have a great evening bag if you want to borrow it.” She loans me this little beaded handbag that looked great with my dress. I went to the party, and, you know, you figure, the *Vanity Fair* Oscar party — all good. It was maybe two feet away from me on a cocktail table, and someone stole the bag.

I called my friend the next day. I expected her not to be happy about it, but I also didn’t know the bag had a special meaning to her. She told me that it had belonged to her mother; it was the last thing her mother had given her before she died. My reaction ranged between feeling terrible and then wishing she had never loaned it to me.

It’s all behind us now, but I think there was a period of time where it was a little bit sensitive. I’m sure she had a version that she told other people. I mean, I was the person who borrowed it, and it got lost. I reported it to the police and they told me that during the *Vanity Fair* party everything that’s not nailed down gets stolen.

I inherited a lot of clothing from my sister, who’s fifteen years older than me. My favorite was this Jean Paul Gaultier Junior dress that has the word “Junior” written across the chest. She bought it the same year she met her now-husband, whose name is Junior, so it was a bit symbolic for her. I wore that dress all the time. It was more like extended borrowing, actually. I borrowed it once and then never gave it back.

About five years ago, I was going out on New Year’s Eve, and I had it with me in a bag. I wasn’t wearing it because I was just going to the supermarket to get something to eat. Afterward, I went to my friend’s house for drinks, and I forgot I’d had the bag with me. I just thought I’d left it in the house somewhere, but I fucking left it in the supermarket. It dawned on me ages later, and I was so sick about it, I actually threw up. I’ve never had the guts to tell my sister. Every time she brings it up, I change the conversation. She asked me about it last week and I just swerved the question. I’m constantly searching on eBay to see if I can ever replace it.

When I was in boarding school, we all wore each other’s clothes. We essentially had one giant wardrobe. We were all in this process of trying to figure out who we were, and clothes were a part of that. Trying on someone else’s shirts or a cool jean skirt a friend had made was like trying on her personality, playing dress-up with identities. The fun of it was *not* owning something. Then it wasn’t a commitment; it was an experiment. Maybe you would figure out what aspect of someone’s style worked for you and get your own version of it.

After that, I didn’t really loan or trade anything until I had children. When I had my first child, someone gave me this Bill Amberg sheepskin baby pouch — one of those slings where you wear the baby on the front. I ended up passing it on to another pregnant friend, and we sort of passed it back and forth through a couple of children. At one point it stopped coming back to me. I hope whoever has it knows its history.

Just the other day, my mom asked, “What ever happened to your wedding dress?” Because it was my grandmother’s, from the ’40s, and then I reconstructed it for me. But then I reconstructed it again, later on, for a performance. And then I gave it to a Kundalini teacher who had performed a lot for me, as a thank-you gift. It was a flash of thinking, but maybe it was something that I should’ve kept.

Sometimes I will intentionally give something away that’s of the value to me, to practice letting go. In my shows I tend to make that point. There was a quilt from the 1800s that my mom saved that was in her lineage of family quilters, and it has become a part of one of my sculpture pieces. I felt like I had to let go of it, you know, just showing that we put too much value on possession. My mother has learned my language, for sure. That’s why she asked me — she knows that everything goes somewhere. Like, what are we gonna do, just wrap it in boxes and keep passing it on?

I have loved fashion from the moment I was born. I worshipped Kate Moss and Naomi Campbell. I always cared about how I looked and dressed. My mother, on the other hand, truly does not give a fuck. She’s a jeans-and-T-shirts kind of lady. Growing up, I’d beg my mother to get me this bag or those clothes, and she would always refuse and say it was too expensive. She just never saw eye to eye with me.

When I moved to New York for fashion school, you *had* to have vintage clothes. I went through my grandmother’s and my aunts’ clothes first, and finally my mom offered to let me go through her closet. I rolled my eyes, like, *sure*, but I wasn’t expecting much. In her stuff, though, was this brown satchel bag — vintage Coach, from the ’80s, back when Coach was a big deal. It turns out that it was the first present my dad ever gave my mom. I found that bag in her closet twelve years ago, and I still wear it to this day. I wear it constantly, and it’s the one thing that I get the most compliments on. I always thought fashion or style was something never be able to connect on, but now I have this bag that I will literally never lend to anyone, ever, in my life. No one else can touch it.

I had this pink dress with little ruffles at the bottom that I’d found at some thrift store in Arizona for five dollars. I loved it so, so much. It was my favorite dress. And then all of a sudden, I just stopped seeing it. I lose clothes all the time, and I have no idea how or why, but I was really sad about this specific dress.

Then, last year, one of my best friends, Misus, was in the middle of the mountains filming something, and she uploaded a photo to Instagram wearing my dress. She was wearing it as a costume in whatever she was filming. I messaged her, “What the fuck? Why do you have my dress?” She swears that I told her one day that I was over the dress and that she could just keep it. It does sound like something I would say, but I don’t have any recollection of it, and I’d never say it about that specific dress.

But it’s one of those relationships where we love each other enough that it doesn’t even matter. It didn’t affect our friendship at all. And I do the exact same thing to her. I have this beautiful vintage leather bag, like a tiny briefcase. It says “Andrea” on it, because the person who had it custom-made had her name inscribed on the bag. Misus bought it at a Mexican market, but she never really wore it, and one day she just told me to keep it. I ended up wearing that bag every single day for at least a year.

In our family, a lot of clothes got passed around, and no one actually knew what belonged to who. There was this one piece of clothing, though, that became this big point of contention between me and my sister. One year, I asked for this pair of really nice khaki pants for Christmas. I usually just got my brother’s nerdy carpenter jeans, but these pants were flared and had cool patches — and pockets! I thought they were super hip. Somehow, though, my sister ended up with the pants. For years, we would argue about who had owned them first. It caused a lot of tension and the whole family would get involved. I think I was always bitter about it because those were the first pair of pants that I felt were mine, and they got taken from me so soon.

In college, we found this old Christmas video that showed me opening the pants and being super excited. Everyone in the family was stunned — it was exactly how I said it went down, and no one else had remembered. It was this huge moment of validation, but eventually it evaporated into nothing. We were all grown up, and the pants were just pants.

*These interviews have been edited and condensed.*