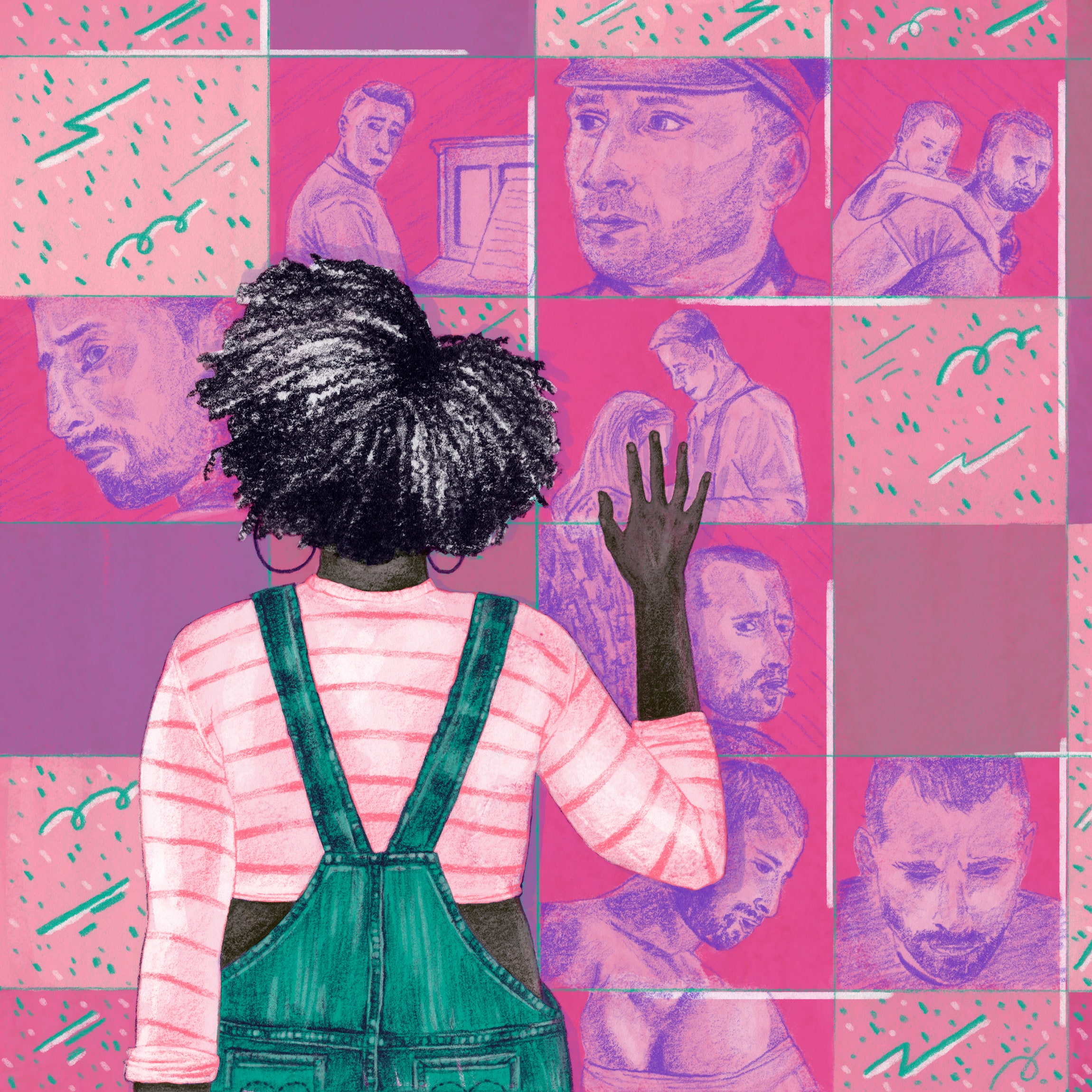 There is an aquarium scene in 2012’s *Rust and Bone* wherein Marion Cotillard, playing a woman (Stephanie) who has lost both legs to an orca accident at a sea park, goes back to visit the killer whale. She stands in front of the tank — soaked with blue — the prosthetic ankles of her new legs firmly planted into her sneakers. She uses her palm to softly smack the glass once and then again to call the whale over to her. She holds both hands up, touching the glass the same way she would touch the whale, if she only could.

She nods and the whale moves its head in a nodding fashion. She takes her right arm and lifts it, points, and the whale swims away, the scene not ending until the last flick of its slick black tail disappears. In the scene preceding the aquarium one, Stephanie is on her balcony in her wheelchair, doing the same semaphore-like arm motions to Katy Perry’s “Firework” that she did before the accident. It, like the aquarium scene, is a scene of both hope and sadness. Healing and wonderfully human moments in a movie that also has scenes of such intense, devastating violence. I had to close my eyes.

Though I was blown away by Cotillard’s performance, in truth, I only watched *Rust and Bone* originally because of Matthias Schoenaerts, the actor who works alongside her. I have a crush on him. My celebrity crushes are emotional rescue when the world is too much. Like a security blanket or a warm mug of tea, they serve a right, proper, selfish purpose — one piece of the puzzle to your girl’s chill, emotional well-being.

I tend to watch movies in batches, in organized, themed groups. Like the books I choose to read, I most often watch movies for the actors/characters and not the plot, although there are plenty of exceptions. But as pretty much a life rule, whenever I fall in love with someone (new to me) on my screen, I will go back and watch most (if not all) of their movies. And this time, it’s Matthias Schoenaerts.

I’ve had plenty of crushes in my lifetime, both real and celebrity. When I was a little girl, I had a crush on the boy up the street who cut the grass with his shirt off. His name started with a T, and he was older than me. I can no longer picture his face, but it was the *idea* of teenage *T*, shirtless, riding the push mower that I liked. I couldn’t have been any older than ten and had absolutely no clue what sex was or what my feelings were, but I liked looking out the car window when we drove past his house and seeing him out in the yard. I liked thinking about him. That’s most of what it comes down to for me: what I like thinking about. A way to curb my anxiety and anxious thoughts. *You could be mine, could be mine, could be mine, all mine. Right?*

Matthias Schoenaerts is an incredible actor, and also easy on the eyes. He’s very pretty, handsome, manly, sexy, handsome, sexy, manly, wow OK yes exactly, etc. He has a great nose, a great walk. He looks really good with a beard and bed-head. He looks fetching in scarves and sweaters. He tends to play characters who are complicated, quiet, and dark. Characters I maybe shouldn’t root for, characters I should probably hate but don’t. Like in *Rust and Bone*, he plays Ali, a knucklehead. A boxer/brawler type who has recently come into custody of his five-year-old son. Ali is not a good father. He is neglectful and violent. Should it surprise us when he is so tender with Stephanie? *Brutal tenderness* and *tender brutality* are common threads running through Schoenaerts’s work, so much so that for a while he had those phrases listed as his Instagram bio.

Ali is physically tender with Stephanie in a way he is not with his own son. There’s a scene of him carrying her into the ocean for a swim, of her hitching a ride on his back on the way out. But when it comes to her heart and feelings, he is brutish. He unapologetically sleeps with other women, takes them home right in front of her. He treats her no differently than he would treat any other woman. Meaning also that he could disappear without a trace, without letting her know he’s leaving. When Stephanie wonders whether sex is the same now that she’s lost her legs, Ali casually asks her if she wants to have sex with him. To try it out. Just to see. Once, after sex, he carries her into the bathroom to pee.

Some of my real-life crushes amounted to absolutely nothing. One crush was an awful idea and led to an emotionally abusive relationship. One crush ended up being my boyfriend for about a year and is still my friend. Another became a boy I’d kiss whenever we were alone. We’d be walking with a group, we’d fall behind, he’d grab me, and we’d kiss against a stranger’s car in the parking lot. We kissed in a pickup truck in the alley behind the coffee shop, listening to *Doggystyle*. We kissed when it was snowing, listening to Vs by Pearl Jam. He was never my boyfriend-boyfriend.

In his movies, Matthias is frequently shot from behind, the back of his head gently bobbing as he walks away from the camera. Mysterious. He shows his ass in a lot of his movies. Some call him the Belgian Brando, and like Brando, his body is important to his body of work, in a way that isn’t true of all actors. He’s usually cast as a taciturn brawler, some kind of protector — a bodyguard, a spy. His quietude is an asset to his characters who are so often paranoid, shattered. In *Suite Française*, he plays a German soldier who has to do unthinkable, unspeakable things, and he is unsurprisingly reserved, brooding. *Brutal*. The German soldier is also a pianist, a composer. *Tenderness*. In *Disorder*, he plays an ex-soldier with PTSD now moonlighting on a security team. (1)-like ’80s video-game music lends an electric, anxious pulse to the movie. His character is easily unnerved by almost anything and removes his earpiece when the constant voices and buzzing are too much.

Matthias’s love interests in these films are often just out of reach — foreplay without completion or mindless casual hookups with no real emotion (from him). In *Bullhead*, he plays a man with no testicles who injects himself with testosterone every day. In *Far From the Madding Crowd*, he plays the dreamy, hulking shepherd Gabriel Oak and is near the woman he loves, but she is always looking at someone else until she finally sees him. In *A Bigger Splash*, his idyllic, sexually satisfying relationship on the volcanic island of Pantelleria is interrupted in the worst way when his lover’s ex comes to visit and overstays his welcome.

Once upon a time, I had a crush on the boy who would become my husband. A bevy of girls at our high school had a crush on him. We called him the *black-haired beauty* and would watch him smoke before school and skateboard after. He always wore the same dark-green hoodie and a carnelian ring that clicked when he moved his fingers a certain way. Irresistible. My favorite boy, favorite kisser. Mmm: Y*es, you could be mine, tonight and every night.* Done and done. Not to brag, but I’m a pro at crushing. And now, all my crushes are trapped behind the glass of my TV screen.

*I’ll be your savior, steadfast and true*
*I’ll come to your emotional rescue*

Onscreen, the characters Matthias Schoenaerts plays may be dangerous, the stories may be dark, but from a distance, my crush heart is protected. All my celeb crushes are safe, calming places I keep coming back to in my brain. It’s more satisfying than lust; I can hold my thoughts captive. But the familiarity or even the idea of a singular person or character provides a simple, soothing sweetness. The world is a mess, but my Matthias Schoenaerts movies stay the same. Even if only for a little bit, they are a balm, an escape. Like listening to St. Vincent cover “Emotional Rescue” by the Rolling Stones for five minutes on the *Bigger Splash* soundtrack. Sometimes that’s all I need — five minutes. And shamelessly, I’ll take my comforting, emotional quickies wherever I can find them.