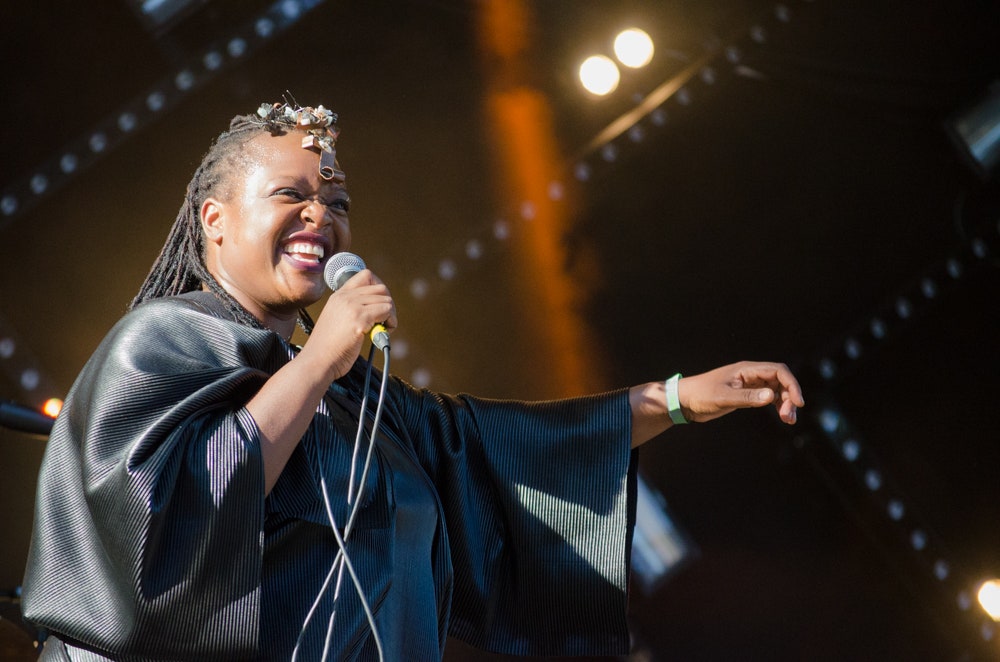 “I came late into my own life,” says Eska Mtungwazi, the British singer who goes by just her first name.

Born in Zimbabwe and raised in South London, Eska didn’t make her first solo album until she was 43 years old. She had obdurate parents to please and other paths to follow before she could make her own dreams come true. “I always knew what I was supposed to be, but I didn’t have the confidence to do it,” she says. Instead, she worked as a songwriter, producer, and guest vocalist with a wide variety of artists. She also has a master’s degree in math from the London School of Economics. Eventually, she reached a point where, like Langston Hughes warned in his poem “Harlem,” her long-deferred dream was bound to explode. She quit what she calls “the gravy train” of collaborations, took a part-time job as a primary-school teacher, and devoted herself to finding her voice. Eighteen months later, she was finished with her debut album, *Eska,* released in April 2015.

Her soulful folksy music is distinctive and confessional and so clearly comes from her soul that it defies classification, gracefully bending across genres. It’s been compared to the music of Kate Bush, Laura Mvula, and Björk, but it’s definitely all Eska. Eska wrote a majority of her songs, with a few co-writers here and there, and she performed lead and backing vocals. While many music writers have called her a multi-instrumentalist (she does play many instruments on her album, including Wurlitzer, clarinet, piano, and many more), Eska is more modest. “I’m no virtuoso,” she says, laughing. The critics disagree with that assessment, though. In 2015, her album was nominated for Britain’s prestigious Mercury Prize. “It was the greatest vindication,” she says. “It was a signpost that I was going in the right direction, confirming who I am and my identity.”

Her journey is an inspiration, and her music is, too, and she is hard at work on a new album that speaks her truth. For Lenny Letter, I caught up with Eska backstage at the Positivus Festival, and she shared her thoughts on creativity, the importance of identity, and why it’s never too late to follow your dreams.

**Melissa Locker:** What was it like transitioning from being a songwriter and collaborator to making your own album?

**Eska:** I was meandering through a lot of musical collaborations and writing for other artists and being a side musician in lots of people’s bands. That’s where I honed my musicianship and performance skills, but not my artistic skills. Making the transition I found very challenging. I couldn’t see any predecessors that looked or sounded like me or anything that I could connect with. I had a few industry comments that made me feel like, OK, I’m not really what they want.

**E:** “Oh, your look and as things progress, your age, or your style of music…” The list is endless! More than anyone saying, *Eska, you’re not the person we want*, what they would do is show me who the person was. That’s how people do it! They say, *This is who’s cool right now*, or S*he’s the up-and-coming thing*, and in a roundabout way, they are telling you that you’re not that. But there were too many ideas knocking around in my head. In the end, I just thought, *Surely it would better me to be doing my own thing in my own way for two people or 200 people — it doesn’t matter.*

**ML:** Your first album came out when you were 43. How were you finally able to push aside doubts and start creating music?

**E:** Being able to push that aside, for me, it was very much a place of meditation. I had to get to a place of being very centered from within and feeling like I loved that person in the mirror. Musicianship requires being a yes person. It’s not about having an opinion; it’s about saying yes to everything, saying, *Yes, OK, I’ll do that*. I had to learn how to have an opinion and learn to feel OK to have an opinion. That was a big deal for me. It’s definitely a gender thing. I think women across every walk of life, every career choice, have to learn to be OK with having an opinion.

**ML:** What do you hope your daughter learns from your experience?

**E:** I think about that every day. I wake up and I think, H*ow do I make this gift I’ve been given the best that she can be? How do I enable her to be the best she can be?* One of the most recent things I’ve learned is don’t impose your ideas of what she needs to be on her. ** It’s about seeing who she is, learning who she is, and affirming that and making choices based on that.

**ML:** That sounds like a good lesson for making music, too.

**E:** Definitely. It probably takes 30 to 50 songs to make an album; there’s a lot on the cutting-room floor, as they say. Now, having had a child, having released my first record, having gone through a breakup, I’m such a different person. My identity has changed, so my music has changed.

**ML:** Will your new album reflect that?

**E:** Oh, big time! I was trying to avoid it, but it kept screaming at me: *Eska, you need to deal with who you are now! You’re a different woman, you’re a different being now, and that’s OK.* In the industry, if people enjoy what you’ve done, they want you to continue that because it was successful in some capacity, and that doesn’t necessarily display growth in terms of personal identity. The most important thing for me is to maintain integrity as much as I can and make music that is an honest reflection of who I am now.

*Melissa Locker is a writer, editor, and occasional ham-radio operator. Follow her on Twitter (1), but not in real life.*