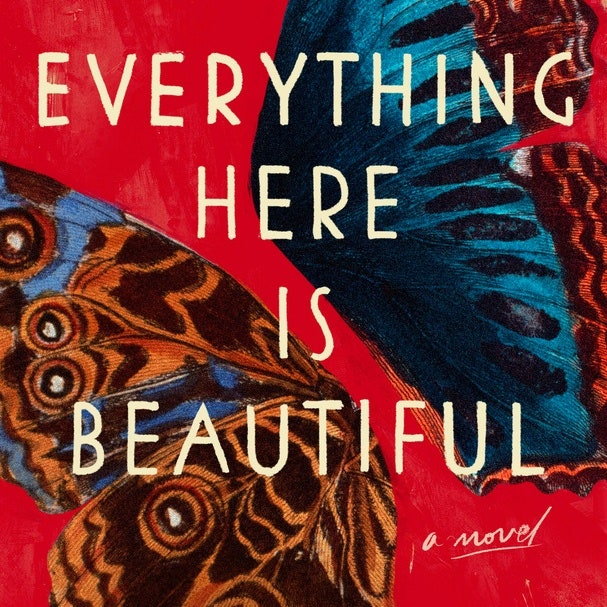 The policeman said when they found her, she was calling for a young girl to come down from a tree. She spoke in soft, soothing tones, switching from language to language. Chinese, the policeman assumed, and Spanish and maybe Hebrew and Portuguese. Except there was no young girl up in the tree. Lucia had taken off her dress and her tights, placed them on the grass and spread the sleeves at right angles, like an X. “*Lai, lai*,” she called. “Come down. *Ici*.” She waved, shivering in her underwear, pointing to the target as though a parachutist might land there. “Please, miss,” said the policeman. “Pardon, Señorita. Do you speak English?”

She turned to the policeman and said, “Excuse me, sir, I speak Cyberspace.” And then she screamed and screamed.

I did not tell Yonah that story about my sister.

I did not tell him because I was afraid he would fight me again about her treatment, even though Lucia had already moved north and out of his life. I steeled myself against him. I would fight and he would not win this time.

When I visited the hospital, he was there. I don’t know how he got there, to Westchester; he seemed so out of place in middle suburbia. It was the first time he had seen her in several months. She was thin. He’d brought her favorite vegan chocolate-orange poundcake, and she ate it with delight. She had taken a pill that day, and as a reward, or an act of good faith, the bony blond doctor wrote her a pass that allowed her to go outside. If you try to run, she warned, the police will come get you. It was a warm, fall day, I remember.

We didn’t think she would bolt, we mostly trusted she would not, except for that small part of us that was afraid we didn’t know this Lucia anymore, the things of which she was capable. So we clenched our teeth as she was released to the front lawn, and she dashed out at full speed, jumping into the piles of red and brown and yellow leaves the landscapers had left in neat piles. She spun around and around with her arms outstretched. “This is so beauuuu‑ti‑ful,” she said, making herself dizzy. We clambered after her with long strides, breaking into a jog when she leapt too far ahead, like parents chasing after a child. We watched as she climbed a tree. Yonah hoisted her up so she could grab a low branch, and she scrabbled up the trunk with her feet. She sat on that low branch for a while, twisting her neck around like a bird, surveying from her new vantage point.

We sat on a bench. Yonah kept checking his watch. “Twenty more minutes!” he said. He did not want her to fall into disfavor with the bony blond doctor, and neither did I. “Fifteen minutes.” She acted like she hadn’t heard, humming to herself in the tree. “Ten minutes,” he said. And I nodded at him, and we stood, erect like soldiers. “Lucy, it’s time to go inside now,” we said.

“Why, Yo‑Yo, what’s the time?” she said. A flippancy I disliked.

“Ten more minutes,” she said, as she swung her dangling legs. We were anxious. “Lucy, you shouldn’t be late,” Yonah said, in that paternal tone that used to infuriate me. She looked at him, leaned forward, bending to hug that low branch until her entire body lay horizontal, and then she lurched her legs and flipped over, landing two feet on the ground. “Perfect ten!” he said, and she slapped him a high five, beaming.

“Six minutes,” I said. We escorted her back up the sidewalk path, past the security guard, up the elevator.

The bony blond doctor looked stern when we arrived. “What’s this I hear,” she said to Lucia, “about you being up in a tree?” Yonah and I looked at each other, confused.

“One of the guards said he saw you up in a tree.”

I drove him to the train station, half an hour away, where he would take the Metro North to the 1 to the F. “Thank you,” I said.

Four days later, I was informed by a social worker that Lucia’s treatment team was planning her discharge.

I drove immediately back to Westchester from Boston. Stefan came with me this time-and though I cringed at the thought of their introduction taking place in the hospital, I also did not want to go alone.

“She’s calm,” said the social, a plump but prim woman, pink and middle-aged. She led us down a maze of hallways to her office. The Ostrich was nowhere in sight.

“Is she taking her meds?”

“She’s taken a few doses of Risperdal. On and off.”

“Risperdal?” I shook my head, confused. “But she was on Zyprexa before. Risperdal hasn’t really worked for her in the past.”

The social frowned. “We often offer it as a first-line antipsychotic. She says she’ll consider outpatient care.”

“Consider?” I balked at the word. “But does she have insight? Does she understand what’s happened? I’d like to speak with the attending psychiatrist, please.”

“The attending is *indisposed* today,” said the social. “Your sister is calm. We can’t keep her here. Why don’t you see for yourself.”

We were shown to the visitors’ lounge, where Lucia sat working on a jigsaw puzzle. When she saw me, a glint of light flashed in her eyes.

“Nice to meet you,” said Stefan.

Lucia’s face darkened. She studied Stefan’s outstretched hand but did not shake it. “So. This is the Elk,” she said, with a silly smirk I did not recognize, and inside I felt my heart cave.

We attempted to make small talk. *Have you eaten lunch yet? What did you do in Group today? Have you been going outside?* Her answers, curt, though intelligible.

“A plan? I’ll get a job.” She folded her arms, tilted back in her chair.

“What kind of work do you do?” asked Stefan.

“Oh, I can do a lot of work. Mostly writing. Reading. Research. I ask a lot of questions, you know.”

“I heard you worked in Bolivia for a while,” he said.

“Yeah,” she said, and her eyes relit as they chatted about the salt flats and flamingos and markets and *choclos* and the altitude in La Paz.

“Here’s a question,” she said. “A good one. Are you two going to make babies?” She pointed at us with two waggling fingers.

Now Stefan was taken aback, I could see, and my discomfort hung, tangible in the air, as Lucia scrutinized our faces and we said nothing.

“Wait. What? You’re not? Well, that seems kind of useless.”

A hardness behind her eyes I did not understand. What was it? Contempt? Arrogance?

By the time we left the building, I was on the verge of tears.

“It’s not her. That’s not my sister. I swear to you, Lucia has never acted that way to me, not ever.”

“That’s not her. That’s her illness. And did you hear that social worker? She didn’t even give a shit. What the fuck are they thinking, giving her Risperdal?”

I slumped to the curb, face in my knees. Stefan knelt down beside me, an arm around my shoulders. “You’ve done what you can, *Schätzli*. Honestly, she seemed all right to me.”

“But that’s not *her*, Stefan. One minute she’s sweet, the next she’s snide. She’s not stable. It’s like she’s fighting some demon inside.”

He did not understand. How could he? But he gathered me in his arms, pressed my head to his chest, kissed my hair. He let me cry and cry, unfazed.

That night, back in Boston, I watched the rise and fall of his rib cage as he slept.

*Are you two going to make babies?*

Guilt stuck in my throat. I closed my eyes, but memories filled my head:

*Luciano, ma’am? Are you sure?* The filing clerk, a perky golden-hair with breasts like balloons.

*Like, I Love Lucy.* The infant, sticky with drool, in my seven-year-old arms.

*Ma’am? I’m pretty sure Luciano is a boy’s name. You want me to change it?*

The baby began to whine and thrash.

When I woke in the morning, Stefan was reading a book in bed.

“Sweetheart,” I said. “I need to ask you something.”

I drew a long breath. “Do you want to have more children?”

“Because I don’t want to have children.”

I blurted it straight out. Just like that. These were not easy words, nor easy emotions, demanding a self-evaluation I would have preferred to avoid. I clutched my blanket, cold and clammy with sweat.

He blinked, slowly. He took my hand. If it rattled him he did not show it. “Why not?”

But I did not know what to say. That I was cold? Unnatural? Perhaps I was selfish? That any maternal instinct I possessed did not come naturally, though responsibility had been sown in me from an early age?

I nodded. “This is worse.” My voice, hoarse and strange. “At least with my mother’s illness I knew what to do. This. . . this feels impossible.”

His lower jaw protruded as he tap-tapped his teeth, a nervous habit I still found endearing.

“She seemed okay.” He kissed my forehead. “I think everything will be okay, Miranda.”

*Jie, do you believe in happily ever after?*

Two months later, Stefan asked me to move with him to Switzerland.

My first instinct: to call my sister. I dialed her number, but quickly hung up. I wanted this decision to be mine, alone, and I wanted to *believe*.