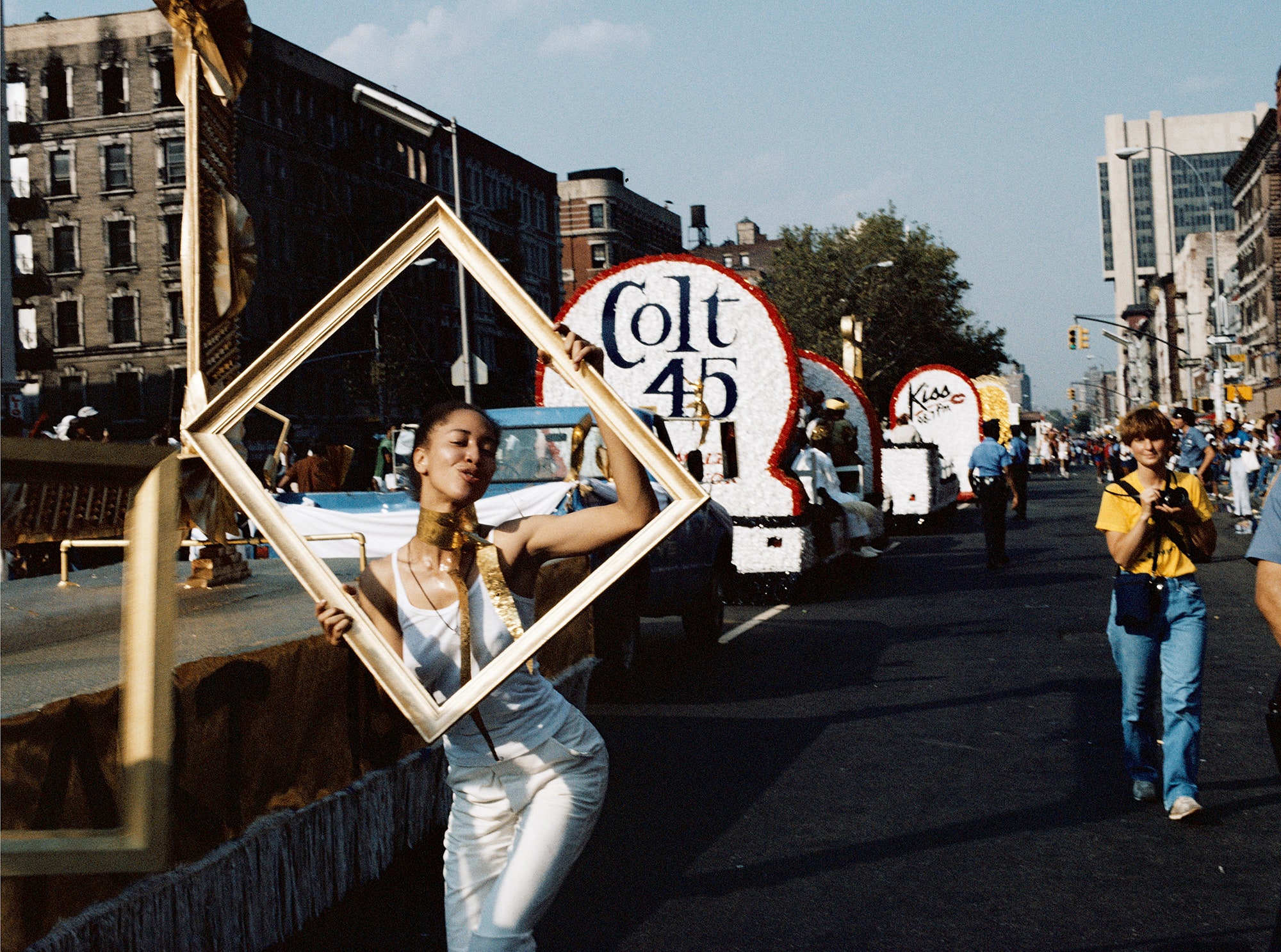 When I interviewed the groundbreaking black feminist performance and visual artist Lorraine O’Grady over the phone in April, she started our conversation with the question all Bostonians ask each other: “Where did you go to school?” Boston is a surprisingly small, insular city, and the high schools serve as immediate shorthand for your race, age, and class level. I went to a tiny, formerly radical and experimental private school that was painstakingly trying to transform itself into a respectable prep school. O’Grady graduated from Girl’s Latin (now Boston Latin Academy), a 150-year-old public school famous for its academic rigor, and a symbol of the kind of egalitarian access to education and learning that represents the best traditions of the city.

But O’Grady is so much more than all that. Her photo installation (1) is basically a compendium of all the things I’m drawn to: family, matriarchy, the complicated relationship between sisters, and the profound loneliness and loss that is felt when those tangled bonds are broken.

O’Grady has been an influential artist for nearly 30 years. Beginning as a performance artist, she’d show up at the blindingly white galleries of 1980s New York as the character “Mlle Bourgeoise Noire,” dressed in a cape made of 180 pairs of white opera gloves, whipping herself with a white cat-o’-nine-tails and calling out — in poetry form, no less — the racial bias and segregation in the art world. Her 1970s series *Cutting Out* The New York Times, a series of found poems using only the text of *The* *New York Times* from a week in 1977, finds its echoes in the work of contemporary black women artists like Alexandra Bell, with her *New York Times* police-brutality-coverage pieces. O’Grady’s essay ” (2)” set the groundwork for describing the ways black women’s bodies are erased, ignored, and distorted in Western art.

She’s lived many lives: O’Grady was a translator for decades, as well as a federal intelligence analyst and a rock critic (she was one of the first to review Bob Marley and the Wailers). Topping all that, she’s name-checked in the enduring single “Hot Topic” from Le Tigre’s first album — her name is chanted alongside those of other women artists who defy categorization like Yoko Ono, Vaginal Crème Davis, and Kara Walker.

I was lucky enough to talk with O’Grady as her work was about to be highlighted again, in *We Wanted a Revolution*, a collection of second-wave black feminist artists at the Brooklyn Museum through September.

**Kaitlyn Greenidge:** I’ve been a fan of your work for a long time. I saw some photos from a piece you did at the Schomburg about six years ago. And then, of course, in high school I listened to “Hot Topic” all the time —

**Lorraine O’Grady:** I think I’ve gotten more attention for that than anything else I have in my entire career. I love that. When you get hooked up with popular culture in that way … I don’t know what the end result of it is, but it’s kind of interesting, you know?

**KG:** I was reading that you worked as a government intelligence analyst before you became an artist. Is that right?

**LO:** Actually, to be honest with you, I had an unusual time in college. I basically had to drop out when I was a sophomore because I got pregnant. And then I came back and I finished a year late, but I finished nonetheless.

I’d won the Sons of the American Revolution prize for being the top-ranked high-school history student in Massachusetts. But that’s not what happened to me at Wellesley. At Wellesley, there was so much reading, and I couldn’t speed-read. I knew I would never be able to read fast enough to do the major in history that I needed.

So I changed my major to Spanish literature. I began to imagine myself in the arts in some way. I just fell in love with literature.

Then I got pregnant and I had to get practical. So I changed my major again, this time to economics. Eventually I went back to Wellesley, and between having a baby and commuting and everything, I had my nose to the grindstone. I was very curious. And I knew that this marriage was not forever and ever, it was just one of those things. In the ’50s and the ’60s, that’s what happened to you.

I took the Management Intern exam, the federal entrance exam at that time, very seriously. And I ended up at the Bureau of Labor Statistics, which was considered a very big deal bureau.

When I got there, because I had Spanish, they put me in the Division of Foreign Labor Conditions. And after a couple of years, when it became clear that African countries were going to start becoming independent, they switched me over from Latin American to Africa. At the time, I was the only person working on Africa at the Labor Department.

**KG:** Did they do that because you were one of the few black analysts?

**LO:** I was the only black analyst there. I don’t think anyone else wanted to do it. It wasn’t very sexy to work on Africa … you could say I was a fancy gofer. Everybody else just wanted to go to lunch. But I thought inviting speakers from African countries and getting to meet the speakers, that was fun.

**KG:** So how did you make the switch from that career to being a visual artist?

**LO:** I actually said to myself, “Anything you commit to is worth five years to figure out. Is this going to take you where you want to go or not?”

All the people at the Bureau of Labor Statistics were really smart, but like most working people they compartmentalized their personalities. They channeled themselves into after-hours and weekend activities that let them still feel alive creatively.

I thought, *I don’t want to be like them when I’m their age*. I also felt that the disparity between who I was and how I was perceived by the world around me was so great that I would have to do something to overcome it.

**LO:** I think, in those days, I may have been fair-skinned enough and educated enough so that the first thing that people saw when they saw me was not a black person, or at least not their preconceptions of one. They didn’t know what they were looking at. When I met people for the first time, the usual question they would ask would be, “Where are you from?”

I’d say, “I’m from Boston,” and they’d get this puzzled look and the conversation would continue. Then I’d realize what they were really asking.

To be honest, after a while it got so annoying, I could barely control myself. And towards the end of the five years, when I already knew I was leaving, when they’d ask, “Where are you from?,” I’d sometimes say, “Oh, I’m black.”

And that’s the point you know you’ve got to move on, right? So I left. I took out whatever little money I had in the system and I went to Europe so I could start trying to write the Great American Novel.

I came back from Europe and went to the Iowa Writers’ Workshop and ended up in the classroom of a Chilean novelist, and then I ended up becoming his translator.

I got sidetracked in Iowa. Almost as soon as I landed in Iowa, I met someone and got married again. So I was pulled into my husband’s world. I didn’t really get out of Iowa what I might have if I’d just been able to be alone by myself.

**KG:** Did you feel a frustration that you weren’t able to do your own work? Or were you kind of relieved that you got to maybe find a different way, or …?

**LO:** That’s such a good question. I think if I’d been more committed to producing the novel, I may not have been attracted to a relationship that would end in marriage. I may not have taken a translation workshop and ended up translating my writing instructor’s novel. Perhaps all of these things happened because I sensed that I was not a good writer. But I’m not sure that not being a good writer was what was discouraging me. After a while, you do improve. But in an odd way, going to the Writers’ Workshop had shown me that I didn’t want to live in a world of writers.

**KG:** I can understand that impulse. Writers are horrible people to be around. They’re so annoying.

**LO:** I’m so glad you understand. I also realized I’d have to spend lots of time doing readings. And to get people to listen to your manuscript, you have to sit and listen to theirs. I really hated listening to people read.

**LO:** I knew the second marriage would not be long to this world. So now I met another guy, and he was in the rock-music business. And I followed him to New York. And became a rock critic. There you go again.

When I realized I was spinning into the rock world, I had to leave it. I thought, *OK, you are not being the real Lorraine. You’ve got to get back to where you were and see how that goes.*

When I started teaching at the School of Visual Arts, one of the originating venues of conceptual and performance art, I felt I was home free. I knew that’s who I was. I got ideas like that all the time. I just hadn’t known they were art.

**KG:** It sounds like the support of a community of artists was important to you.

**LO:** Realizing it would be great to live in a world of artists was the opposite of finding out I did not want to live in a world of writers, that it would not help me develop as a person, that it would not bring out the best in me. You know, I can get competitive and pretty awful if I have to be around too many verbal people. And that’s always dangerous if you have the capacity to shift into overdrive, you know? You do not end up being lovable or loved that way.

I wanted to be in a softer, quieter community than the literary one, and I found that community. At least it seemed that way to me.

**KG:** What are some of the most exciting things you’ve seen your work do over the years?

**LO:** I couldn’t have anticipated this moment. Even if I felt my work was deserving, it wouldn’t necessarily have to happen as it did.

But when I was basically written out of the art world, I think it was about 1995, that was like the very start of the Internet. So I really learned how things worked.

A few years later, I was living and teaching at UC Irvine, and I didn’t drive, so I lived on the Internet. The years 2000 to 2005 were the cusp of the change. I had all this artwork and writing. But nobody knew about it. I thought, *Well, OK, if I put it up on a website, maybe people will figure it out.*

I couldn’t have anticipated how well that would work. In the past, at every step of the way, there had been resistance to the work I did. Now it seemed as if the world was catching up with me. I no longer had to engage in elaborate translations. I still have to explain my work, but at least now there is a vocabulary with which to explain it.

I find that my biggest audience is under the age of 30. The reception of the work is far more complex and complete than I ever imagined it would be.

*Kaitlyn Greenidge is a contributing writer for Lenny Letter and the author of* (3).