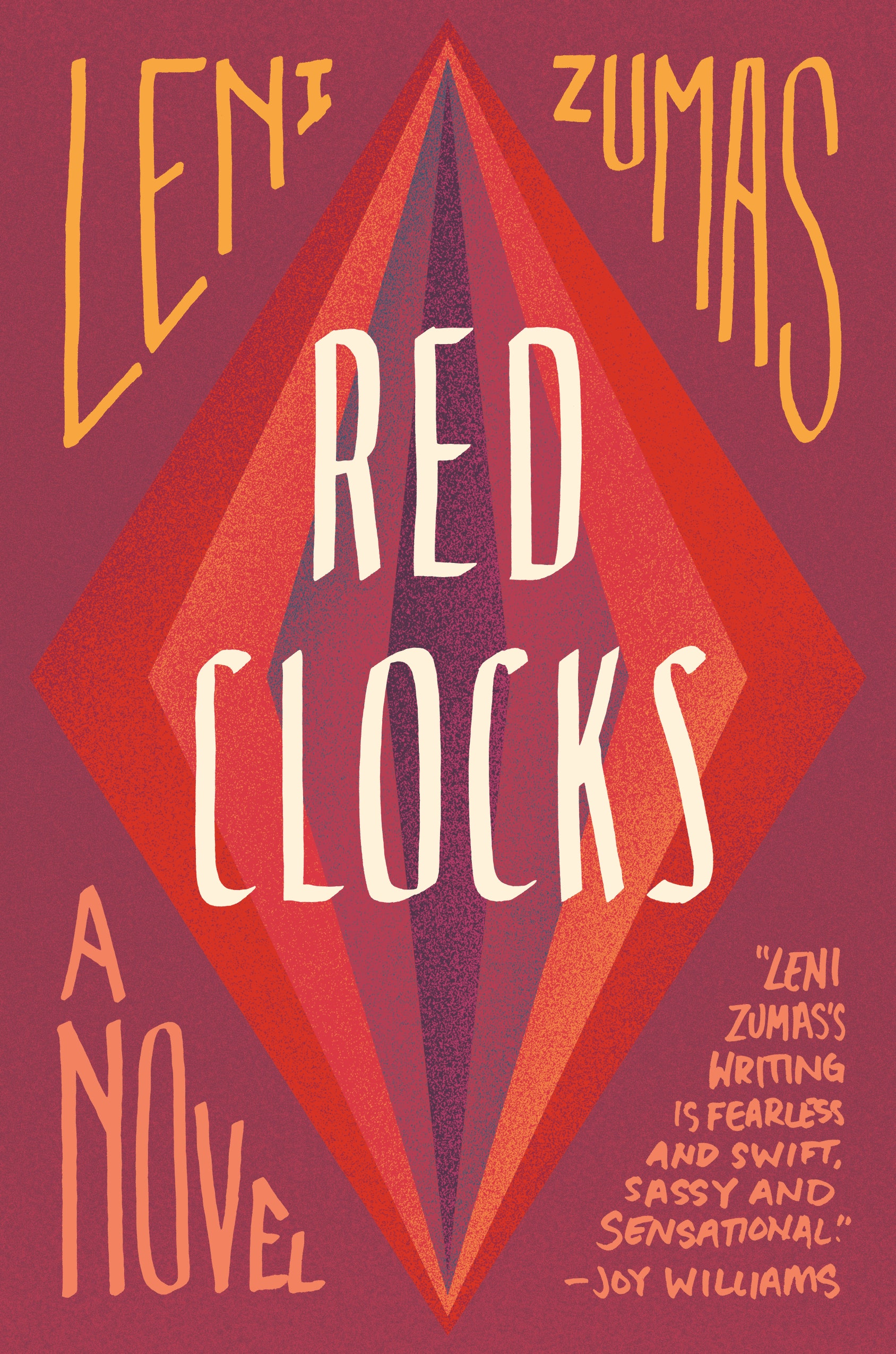 *My novel* (1) *takes place in a small town on the Oregon coast after Congress has passed a law granting rights of life, liberty, and property to a fertilized human egg. Abortion is illegal; in vitro fertilization is banned.*

*Championing the rights of a single-celled zygote over those of the woman whose body contains it has long been a fetish of conservative politicians. While doing research for this book, years before Trump’s election, I learned about the “personhood amendment” and Sanctity of Human Life Act supported by Paul Ryan, Mike Pence, and other Republican legislators.*

*I was struggling, at the time, with infertility. These grinning men and their pious zeal to outlaw abortion and IVF made me shiver with rage.*

*A core character in* Red Clocks *is an herbalist named Gin Percival, also known as the Mender. She descends from the Cape Cod witch Goody Hallett, who sought revenge against her wayward pirate lover by luring ships to crash on the rocks. The Mender lives alone in the forest and tends to people who can’t afford doctors or health insurance. She breaks the law by ending the unwanted pregnancies of her clients.*

*The Mender is a hinge between our current moment and the violent, vibrating history of women who were feared, punished, or killed because they didn’t do as they were told. Women who did not accept enslavement, did not shut up about voting rights, did not become wives or mothers, did not smile enough.*

Last week’s complaint was vicious burning when she peed; today’s pain is new. “Pants off and lie down,” says the mender. Clementine unzips herself, kicks away the jeans. Her thighs are white and very soft, underwear the size of a shoelace. She plumps back on the mender’s bed and opens her knees. A vesicle on her south lip, the inner fold, white-red in the browny pink: how much does it hurt?

“My javiva,” says Clementine, “is having a bad year.”

Purslane, bishopswort, devil’s claw, ten strands of human hair in sesame oil. The mender dabs a few drops on the wart, recaps the tincture. “Put this on it twice a day.” More warts are likely to join it, possibly a lot more, but she sees no cause to say this.

After Clementine leaves, the mender misses her. Wants back the soft white thighs. She likes her ladies big-sirenic, mermaids of land, pressing and twisting in fleshful bodies.

She lies naked with the cat by the stove, rain steady on the roof and the woods black and the foxes quiet. The innermost chamber of her left ear catches powderpost beetles scratching at the roof joists, laying eggs in the seams of the wood.

Does she get frightened, all the way up here in the middle of nothing? Silly bitch, trees are not nothing. Nor are cats, goats, chickens, owls, foxes, bobcats, black-tailed deer, long-eared bats, red-tailed hawks, dark-eyed juncos, bald-faced hornets, varying hares, mourning cloak butterflies, black vine weevils, and souls fled from their mortal casings.

She is only alone *human*-wise.

The goats aren’t home yet. Cramp of worry. Last year they wrecked a campsite near the trail. Some dumb tourist left his food out. When the mender found them, the tourist was pointing a rifle. “Better keep them on your property from here on out,” he said, “because I love goat stew.”

In Europe they used to hold trials for misbehaving animals. Wasn’t just the witches they hanged. A pig was sent to the gallows for eating a child’s face, a mule roasted alive for having been penetrated by its human master. For the unnatural act of producing an egg, a rooster was burned at the stake. Bees found guilty of stinging a man to death were suffocated in the hive, their honey destroyed, lest murder-honey infect the mouths that ate it.

From the limping hen two eggs come down: one cracked, one sound. “Thank you,” says the mender to the hen, a Dark Brahma with a plum-black wattle. Because she limps so badly—is not one of the winners—this hen is the mender’s favorite. A daily happiness to feed her, to save her from foxes and rain.

Sound egg in her pocket, she pours the goats’ grain. Under the shed there used to sleep a varying hare. Brown in summer, white in winter. He hated carrots and loved apples, whose seeds, poisonous to rabbits, the mender made sure to remove. The hare was so cuddly she didn’t care that he stole alfalfa from the goats or strewed shit pellets on her bed when she let him inside. One morning she found his body ripped open, a sack of furry blood. Rage poured up her throat at the fox or coyote, the bobcat, *you took him*, but they were only feeding themselves, *you shouldn’t have took him*, prey is scarce in winter, *but he was mine*. She cried while digging. Laid the hare beside Aunt Temple’s old cat, two small graves under the madrone.

The mender stirs the egg with vinegar and shepherd’s purse for the client coming later, an over-bleeder. The drink will staunch her clotty, aching flow. She’s got no job and no insurance. *I can pay you with batteries*, her note said.

Clementine brought black rockfish as payment. The mender lifts it from the cooler, gets a bowl and a knife. She feeds the flesh to the cat and crunches the bones in her own mouth. The eyes she throws into the woods.

“Your science teacher will tell you,” Temple once said, “fish bones are pure calcium and can’t be digested by the human body, but let me assure you, that’s not the whole story.”

One of the things the mender loved best about her aunt was “let me assure you.” That, and she cooked regular meals. Before Temple, when her mother forgot to buy food, the mender sautéed ketchup, mustard, and mayonnaise into a hot crust.

Now she mostly eats from the forest. Watercress and bitter cress, dandelion, plantain. Glasswort and chickweed. Bear grass, delicious when grilled. Burdock root to mash and fry. Miner’s lettuce and stinging nettle and, in small quantities, ghost pipe. (She loves the white stalks boiled with lemon and salt, but too much ghost pipe can kill you.) And she gleans from orchards and fields: hazelnuts, apples, cranberries, pears. If she could live off the land alone, without person-made things, she would. Hasn’t figured out how yet; doesn’t mean she won’t. Show them how Percivals do.

Her mother was a Percival. Her aunt was a Percival. The mender has been a Percival since age six, when her mother left her father, who went away most Friday afternoons and didn’t come back until Monday and never said why. “A woman wants to know why,” said the mender’s mother. “At least give me that, fuckermo. Names and places! Ages and occupations!”

They drove west across Oregon’s high desert, over the Cascade Mountains, mother smoking and daughter spitting licorice nibs out the window, to the coast, where the mender’s aunt ran a shop that sold candles, runes, and tarot packs. On the first night, the mender asked what that noise was and learned it was the ocean. “But when does it stop?” “Never,” said her aunt. “It’s perpetual, though impermanent.” And the mender’s mother said, “Pretentious much?” The mender would take pretentious any day over high.

Eight winters ago the mender found Temple’s body flopped at the base of a silver fir, and will never be sure of the reason. Heart attack? Stroke? Out to gather miner’s lettuce, her aunt had been gone so long she started to worry. Went looking. There she was.

She could not give her to a funeral home to be gutted and waxed. The ground was hard. Temple had never liked fire. So the mender clipped off her nails and her hair and her lashes; shaved the skin from each fingertip; and put her dear body in the chest freezer, under salmon and ice. The fingernails are stored in a jar on the cabin shelf. Lashes in a glassine packet. Head hair and pubic hair ground up for tinctures. This is how Percivals do.