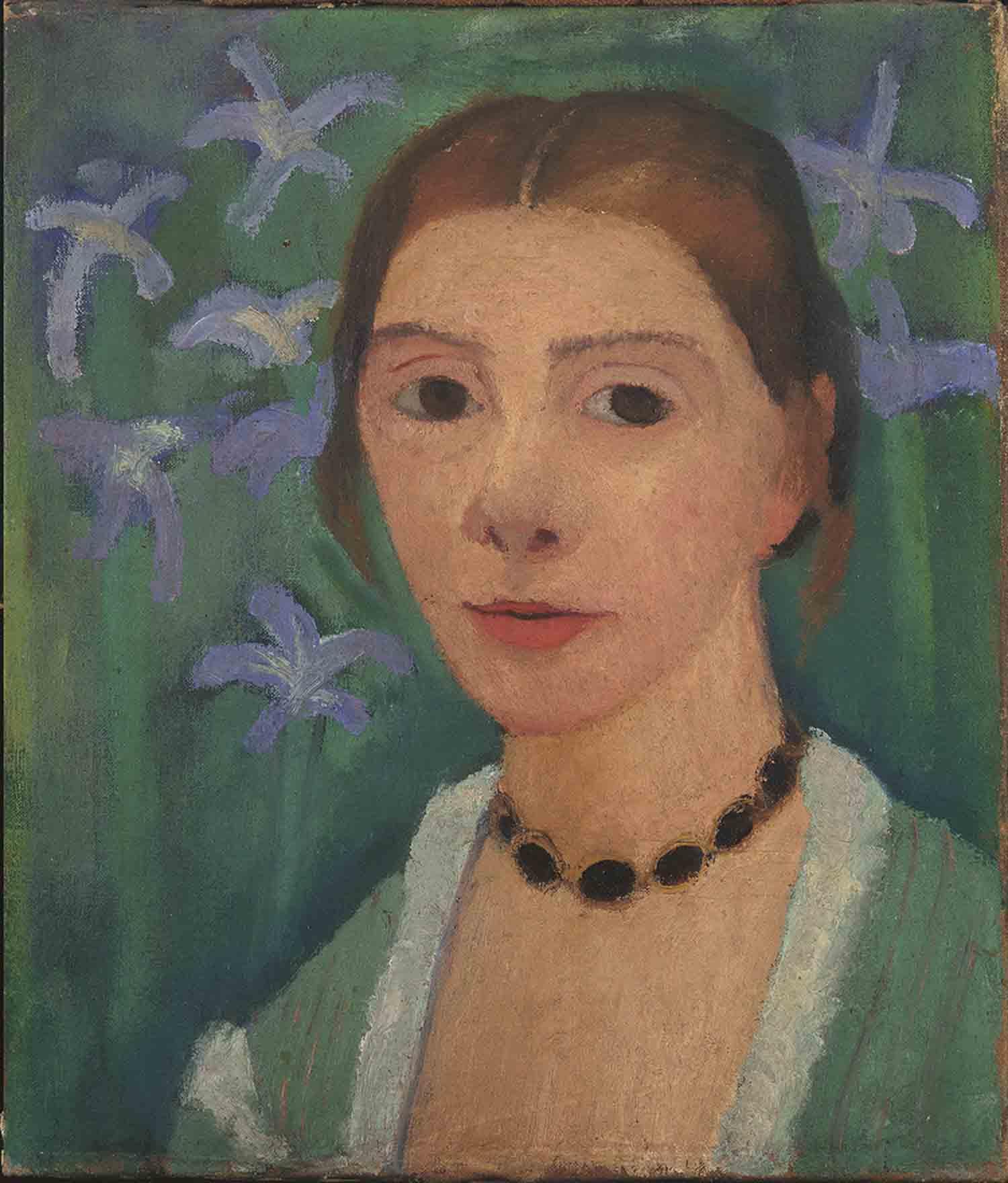 Last summer, Cindy Sherman unexpectedly made her Instagram page public. In between shots taken at art museums and photos of the quiet odds and ends of her life was a trove of new self-portraits. These had the conventions of selfies — closely cropped images of Sherman’s face, the gaze directed at the camera or just beyond — but something was off. The portraits were stretched in size and processed by face-changing filters, resulting in creepy, colorful, and distorted photographs that pointed playfully at Instagram culture.

Cindy Sherman and artists like Catherine Opie, Eleanor Antin, and Hannah Wilke have made the self-portrait a cornerstone of feminist art. The allure of the genre lies in its assertion of control: when art museums are still lined with images of female figures painted by the invisible hands of a male artist, there is something compelling about a self-portrait’s statement of autonomy.

There are many precedents for Sherman’s and Opie’s work — like that of German artist Paula Modersohn-Becker. A contemporary of Matisse and Picasso, Modersohn-Becker is credited with painting not only the first female nude self-portrait in Western art but also the first pregnant nude self-portrait. When she died in 1907 at age 31 from a pulmonary embolism, a complication of childbirth, she left behind more than 700 paintings, many that prefigured the innovations of Cubism and Modernism. And yet her work is little known outside of art-history classrooms and her native Germany.

Modersohn-Becker is the subject of a new biography, * (1)*, written by the French novelist Marie Darrieussecq, translated beautifully by Penny Hueston, and released in the United States last September by Semiotext(e). The book builds on the first English monograph of her work, written by the art historian Diane Radycki in 2012. Together, Radycki and Darrieussecq contend that Paula Modersohn-Becker deserves recognition for laying the groundwork for twentieth-century feminist art.

Born in Bremen in 1876, Modersohn-Becker received money from her uncle in her late teens and moved to an artists’ colony in West Germany called Worpswede. At this swampy nineteenth-century Marfa, she met the men and women who would become most important to her: Clara Westhoff, the sculptor and Paula’s best friend; Otto Modersohn, the painter of gloomy landscapes and her future husband; and Rainer Maria Rilke, the poet, husband to Clara, and one of Paula’s most intimate pen pals. These three artists would be the guiding forces of her creative and personal lives, sharing her enthusiasm for painters like van Gogh, Gauguin, and Cézanne and serving as the recipients of and responders to her many carefully crafted letters.

The recurring note in Modersohn-Becker’s life was her unromantic devotion to her work: she resented her domestic responsibilities because they were dull and distracted from her painting. In protest, she escaped to Paris, where she lived alone for month-long stints before and during her marriage. It was also rumored that she resisted sleeping with Otto for the first five years they were together, either anxious about the impact of childbirth on her work or the result of Otto’s possible impotence. (For the record, Darrieussecq is uninterested in this kind of gossip: “Their marriages consummated or not, all these people are dead,” she writes. “When I hear the word ‘consummated,’ I think of soup … I’d rather look at Paula’s paintings.”)

Paula is easy to sentimentalize. In her letters, collected by her mother after her death and published to become a best-seller in Germany, the charms of her prose are evident: she is clever but guileless, a young girl in an innocent Europe, a Germany before its two major wars. “These letters are how most people got to know her,” Radycki explains in an interview with *The New Yorker*. “They expected the paintings to be as sweet as the letters, but they found them to be edgier and didn’t exactly know what to do with that aspect of her. That’s where she always fell between the cracks.”

Modersohn-Becker was full of these contradictions: She was both the good girl and a woman who ran away from a husband and her young stepdaughter. She was German but found her sense of self in France. Her work was not Expressionist, but not quite Cubist or Modernist either. She hated being chained to the house and disliked the compromises of marriage but craved support and comfort. Even her name gave her trouble: over the course of her life, she was known as Paula Becker, Paula Modersohn, Paula Becker-Modersohn, Paula Modersohn-Becker, and then Paula Becker all over again (Darrieussecq refers to her as simply “Paula”).

Her complicated understanding of her own wants and desires is echoed in her approach to her paintings. Darrieussecq argues that Modersohn-Becker works to free the female form from centuries of subjugation and loaded meaning, of men painting women’s bodies to be either object or allegory. Modersohn-Becker’s work — often portraits of women, both elderly peasants and young girls — foreshadowed what would be known as the female gaze, the representation of women without attempting to diminish or resolve their contradictions.

In what might be her most famous work, the 1906 *Reclining Mother-and-Child Nude II*, Modersohn-Becker paints the figure of a broad mother, lit from above, spooning the body of her child. The mother faces the viewer, her arms protectively encircling the baby’s head, her face in shadow. The child appears to be breastfeeding, its body mirroring the shape of its mother, its back turned to the viewer — a closed circuit of intimacy.

In Radycki’s reading, the painting “conflates depictions of woman traditionally at odds with each other: consecrated mother and consenting female. Woman is one or the other, not both at the same time.” Darrieussecq phrases it more plainly: “It is a painting of simply breastfeeding, an idea which is revolutionary and remarkable in and of itself.”

Darrieussecq pays special attention to a second painting, a 1906 nude self-portrait, unusually titled *I painted this at age 30 / on my 6th wedding day / P.B*. In it, Paula paints herself nude from the waist up, a distinctive amber necklace hung around her neck. Modersohn-Becker created a number of nude self-portraits, but here her hand rests atop a rounded belly, seeming to indicate a pregnancy. This presents a contradiction: at the time of her painting, Modersohn-Becker had left Otto and was living alone in Paris. It wasn’t until weeks after her birthday that she returned to him and became pregnant.

And so that leaves the Modersohn-Becker scholars (“All thirty of them,” Darrieussecq wryly notes) to debate: Was she already pregnant and our chronology is wrong? Was the painting intentionally misdated? Or is this a self-portrait of a woman who ate too many potatoes and cabbage, a bloated nude (which may also be a first)? Darrieussecq offers a different interpretation of the painting: “She could just as easily have been imagining herself pregnant … The self-portrait as auto-fiction. She paints herself as she would like to be, and as she imagines herself.”

About a year after she painted this portrait, Modersohn-Becker gave birth to a daughter, Mathilde. She had an uneventful pregnancy, complaining only that the discomfort kept her from her painting. Following the birth, her doctor recommended bed rest. Two and a half weeks later, she got up. “A little party is organized,” Darrieussecq writes. “The house is overflowing with flowers and candles; everything is lit up. Paula stands, and then falls to the floor. She dies of an embolism, from lying down too long. As she collapses, she says, ‘*Schade*.’ Her last word. ‘A pity.’”

That is the end of her story — a young woman, a mother, and a painter of almost a thousand works, only four of which sold in her lifetime. And yet her death sparked more than a century of debate over the meaning of her life and the categorization of her work.

Rilke memorialized Paula in his 1908 poem “Requiem for a Friend,” in which he mourns her death as an “old-fashioned death of women in childbirth,” the result of the burden placed on women by the demands of the home. He wonders what would have happened if women were not forced to be wives and mothers but free to choose their paths, just as he had opted for artistry over fatherhood, leaving Clara and their daughter behind him.

Darrieussecq has no patience for this argument: “Rilke wrote some narrow-minded things about the choice women have to make between having children and being creative,” she reflects, wearily. Instead, she suggests that Paula made the choice to have both.

Radycki, as an art historian, has a different read on Paula’s work. Rather than interpreting her work as a personal investigation of motherhood or a domestic tragedy, Radycki suggests that Modersohn-Becker’s maternity paintings and nudes are a declaration of her own talent. “The nude was the picture of big ambition,” she writes, pointing to the 50 or so nudes Modersohn-Becker painted, most in the last year of her life, including one full-frontal, full-length self-portrait. “What is ‘betrayed’ in Modersohn-Becker’s life-size self-celebration,” Radycki writes, “is outrageous professional ambition and risk.” If Paula is responsible for the modern origin of the female gaze, Radycki suggests, it was as much a calculated statement — a way into the competitive arena of big-name painters — as a personal sentiment about the humanity of the women she portrayed.

Personally, I see a young woman whose primary engagement was with her own work, to the detriment of her relationships. A woman who is hungry for success, for culture and knowledge. Who simultaneously fears the encroachment of motherhood and desires its intimacy. I see a young woman who lives in the world through the prism of her work, who finds meaning in life’s potential to influence her painting. Then again, I am a young woman interested in hard work, and hungry for stories to keep me company.

Ultimately, this debate over the meaning of her life and the significance of her death is the fate of a woman artist who dies before her work is done. Radycki suggests that there is misogyny inherent in mourning the interruption to Paula’s creative output: she points to the work of the painter Egon Schiele, who also died at a young age and whose work we consider to be complete in and of itself. Which is to say: this is all just a distraction from her paintings.

Last November, I spent a rainy afternoon at MoMA, winding my way through the permanent-collection galleries. As I rounded a corner, I saw a familiar face on the far wall. It was Paula’s self-portrait, painted in 1906 and acquired by the museum in 2017, MoMA’s first work of hers. She gazes out of the canvas assuredly, one hand resting on her stomach. The other holds two purple flowers, which appear to be an offering to the viewer. But as I stood there and looked a little longer, it occurred to me that the flowers were there just for her.

*Julia Bosson’s work has appeared in publications such as* VICE, Guernica, *and* BOMB, *among others. She teaches writing at the Cooper Union and Baruch College. Follow her on Twitter: (2).*