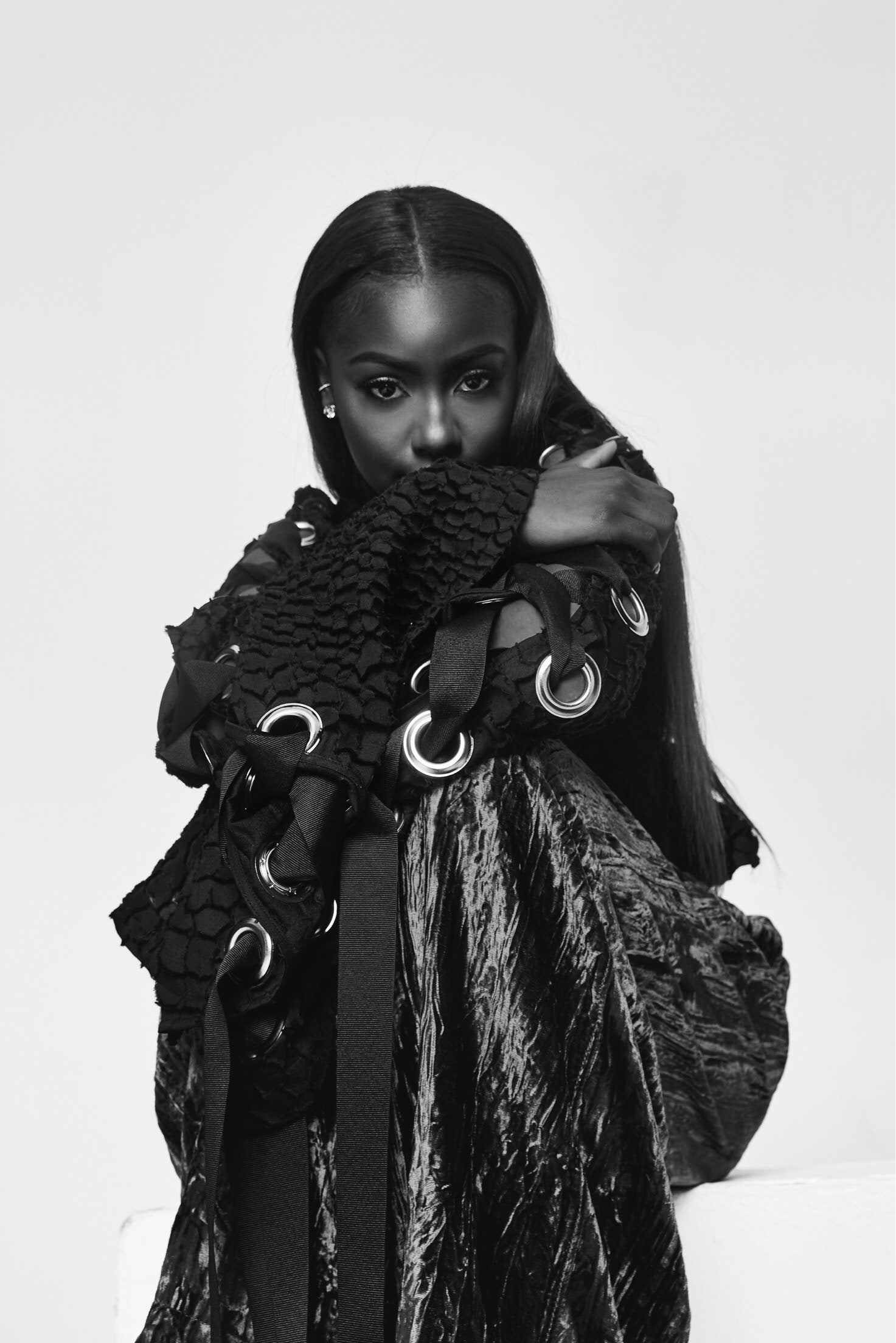 Like most artists who get their big break today, Justine Skye got her start on the internet. The Brooklyn singer built her following on Tumblr nearly eight years ago, with early co-signs in the form of reblogs and digital rounds of applause. From there, her covers of Michael Jackson’s “ (1)” and Drake’s “ (2)” earned her buzz that translated into a record deal, with Skye dropping her first EP, *Everyday Living*, at just seventeen. In 2016, Skye caught the attention of her borough’s most beloved rapper and businessman, Jay-Z, who signed her to Roc Nation.

Skye’s velvety and sultry voice takes you back to the ’90s golden era of R&B, filled with mass-appeal powerhouse singers like Brandy and Monica. She even has her own signature look, with Skye affectionately known as the “Purple Unicorn” because of her violet-hued hair. Her star power has been solidified with endorsements from singers like Kelly Rowland and collaborations with beauty brands like MAC Cosmetics. And of course, there’s her songs like: “ (3),” a sleek, DJ Mustard–produced ballad featuring Tyga, collected over 3.7 million YouTube views, and her 2015 hit “ (4)” earned her a top-ten spot on the (5) With each new layer of music, Skye’s fan base (lovingly known as #UnicornNation) grew, and her original Tumblr clout shifted into an audience of 1.3 million followers on Instagram.

For the past few years, though, it’s become common to cast off Skye into that LA scene, due to her crew of friends, which includes Hailey Baldwin and the Hadid and Jenner sisters — just another gorgeous young starlet whose multifaceted résumé reads: model, influencer, singer, actress. But with the recent release of her debut album, *Ultraviolet,* a ten-track serving of dance bops and ballads about breakups and relationships, Skye tells me she’s “getting back to that girl that everyone saw on Tumblr and getting back to what started this all.”

For Lenny Letter, I caught up with the 22-year-old as she gets ready to go on her first headlining tour, starting tomorrow. She opened up about her newfound confidence, finally being recognized as an artist, and what her “Purple Unicorn” nickname means to her now.

**Ngozi Ekeledo:** It’s been a big year for you so far. You released your first full-length album, *Ultraviolet,* in January, and now you are getting set to go on tour. Initially you completed the album, and then you scrapped everything. Why?

**Justine Skye:** The songs were still amazing, but I didn’t feel as connected to them. If someone were to ask me how I felt about a song or what it was about, I wasn’t able to explain that to them, and I felt like that was a huge problem. If I had a centimeter of doubt? That wasn’t possible . So my label supported me and wanted to start over, and we did, and we came up with *Ultraviolet.*

**NE:** Roc Nation has played a big role in your career. You have people like Kelly Rowland calling you the future of R&B. You just met Beyoncé. What do those moments signify for you?

**JS:** First of all, they make me pass out . It’s just another level, because as artists, we’re very sensitive, and we’re very shy, and sometimes we have moments where we’re like, *Is this what I’m supposed to be doing?* And when you think about moments like that, and when you see your fans and how much you mean to them and how much your music means to them, it’s just like confirmation, and it pushes you.

**NE:** It seems like with the release of this album, there’s a renewed sense of self. What did this process teach you personally and professionally about yourself?

**JS:** Just the whole project itself is confidence, and that’s the woman I found while working on this. I’ve been in this industry since I was young. I started first when I was seventeen. I used to be very quiet and went with whatever I was supposed to do. Now I’m able to speak up and be confident in what it is that I want, even when it comes to my relationships, which is what a lot of the album is about.

**NE:** You co-wrote two songs on this album, “U Don’t Know” and “Push Ya.” What gets you into your creative zone?

**JS:** I prefer for the beat to be made in the room with me so that I can feel even more connected, but sometimes it doesn’t work like that. Sometimes you’ll come across a beat that’s just super amazing, and it’ll inspire something in you and you’ll start going, but I normally start off with melodies. I love to have different energy in the room because you never know what it could spark.

**NE:** Is there a song on tour you’re most excited to perform?

**JS:** I might be most excited to perform “Lil Boy” because it’s so hype. That song just makes me feel that much more confident and undefeated and just ready for the world.

**NE:** There’s a lot of people who’ve misidentified you or labeled you for one of your famous friends. How has the perception of you changed since your album release?

**JS:** It’s changed so much. A lot of people didn’t even know that I was an artist, and even though I was doing music, there was a very small community of people that actually appreciated it or even considered it. Now when I step out, people come up to me and say that they love my album. I was in Paris, and some of my fans would be playing my songs as I was walking somewhere, that would literally bring tears because this is something that I always wanted, and now I feel like this is the beginning for me.

**NE:** When people think of you, one of your signatures is your purple hair. You have the nickname “Purple Unicorn.” How has the definition of that moniker transformed for you over the years?

**JS:** A unicorn is unique and rare and very powerful, and as I grow and understand myself in this industry, I start to understand the name more and what an actual unicorn means. A lot of people think it’s just like a childish fairy tale, but it’s more than that. It’s being that strong, rare being.

*Ngozi Ekeledo is an award-winning TV journalist and freelance writer based in Chicago. Her work has appeared in* Food & Wine, Racked, *and* Chicago Magazine. *You can subscribe to her podcast Who Would Have Thoughts? on (6) and follow her on Twitter and Instagram: (7)*