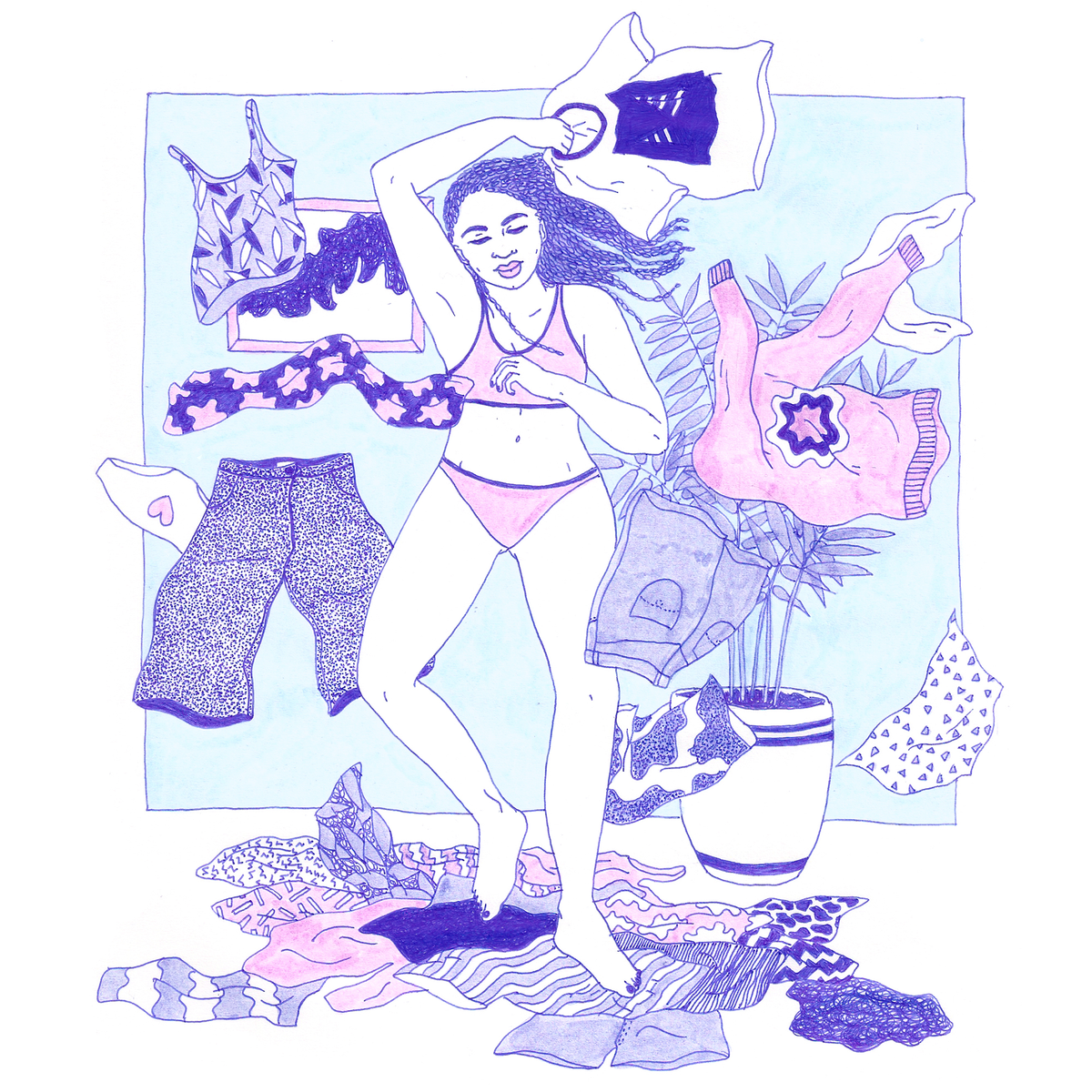 I’ve been a label whore since I was five years old. Not because I was born into a wealthy family, and definitely not because I knew what a fashion designer was; I was infatuated with name brands at an early age because my mother has been obsessed with keeping up with the Joneses for as long as I can remember.

She was so determined to make sure my sister and I wore nothing but the best, she would strap us in the backseat of her old Buick and drive an hour and a half to Kankakee, Illinois, from our home in Chicago to go shopping. And when I say “go shopping,” I don’t mean that in the literal sense. We didn’t drive to a mall, find a parking spot, and then go inside and ask the salesclerk where the children’s section was. We drove to my mother’s friend’s house and proceeded to try on clothes that her three daughters had grown out of. This was basically the black bourgeoisie version of taking us to the Salvation Army.

While my sister and I were busy upstairs trying on hand-me-down expensive dresses and overpriced denim overalls, my mom was downstairs drinking wine and gossiping with her friend. After a few hours, we would have at least three huge bags filled with designer clothes — free of charge. Now, of course, we would then pile into the Buick and drive back to our modest house on the South Side, but we had a trunk full of the finest clothes money could buy — so it didn’t matter what our financial situation was at the time, because inside we felt like a million bucks.

It was during that time I learned the importance of doing whatever you had to do to acquire great clothes, and as I got older, my addiction to them only got worse. In high school I was a slave to name brands. Tommy Hilfiger was a favorite. FUBU was still a thing. Ralph Lauren was huge, and because Jay-Z was at the height of his career, every self-respecting teenager had at least one Rocawear hoodie in his or her closet. And since I was still a budding lesbian at the time, everything was at least three sizes too big. Whenever I look at old pictures of myself, I always wonder why my mom let me leave the house every day looking like an extra from a Wu-Tang Clan video. But since she had such a fear of my sister and me getting pregnant in high school, she was probably relieved that I would rather hide my body than show it off.

> It was during that time I learned the importance of doing whatever you had to do to acquire great clothes, and as I got older, my addiction to them only got worse. ​

Sneakers were also a big deal. They had their own caste system. If you wore K-Swiss, it meant you probably had a single mom who worked two jobs and knew paying for groceries was more important than you being the most popular kid in school. That was me. If you wore Jordans, chances were you lived with your mother and your father, and they didn’t mind paying for them, or you had a parent who couldn’t afford them, but they would use half their disability check or tax return to pay for them just so you could have a fresh pair the day they came out.

Speaking of coming out, that’s exactly what I did freshman year of college — not to my friends and family or anything. Just to myself. Between the baggy clothes, my large collection of sneakers, and my enormous crush on Mariska Hargitay, it was pretty clear that I was a full-blown lesbian at this point. But I still didn’t know what kind of lesbian I wanted to be. Yes, there are different kinds. But for the sake of this piece, I’ll just focus on the two categories I knew I didn’t fall into.

I wasn’t a Stud: a woman who wears men’s clothes and usually has a short haircut. And if you’re not paying super-close attention, you could mistake her for a guy. I definitely wasn’t a Fem: a woman who can pretty much pass for straight. On any given Sunday you’ll catch her in a pair of skinny jeans, high heels, or even a dress. When I realized there was a new fashion playing field, I had an identity crisis because I had spent the last four years of my life picking out clothes that would impress my classmates, not display my sexual orientation. Once I got to college, it became quite clear that no one gave a shit about what I wore. So I spent most of my time wearing sweatpants and hoodies.

> Once I got to college, it became quite clear that no one gave a shit about what I wore. ​

But during college, I hit a major milestone in my homosexual journey. I secured my first gay friend. He obviously wasn’t the first gay person I’d ever met, but he was definitely the first gay person to take me under his wing and show me the way. Not only did he give me my first tour of Boystown (that’s the part of Chicago where all the gay people dwell), he also introduced me to my first thrift store.

As soon as I walked in, I was accosted by a scent. It was a combination of old clothes and patchouli — so I was a little apprehensive at first. But after walking around for a bit, I spotted some cool hats (I was really into hats at the time) and a pair of ripped jeans I could have sworn I had seen in Janet Jackson’s ” (1)” video, and of course there was a huge section dedicated to every hipster’s Kryptonite … vintage T-shirts.

I had never seen a real vintage tee up close before. I had no idea how intoxicating soft cotton and a faded print could be. There were so many rows of them that I just picked a color and started sifting through them like a secretary flipping through a Rolodex. I decided to start with the blue section first, and to this day I thank God I did, because after a few minutes of digging, I happened upon a vintage *Hill Street Blues* T-shirt with a large MTM logo just underneath the title. Of course it was two sizes too big, but being the huge Mary Tyler Moore fan that I was (and remain), I didn’t care. It only cost me fourteen bucks, and it’s still on my short list of things to grab if my house ever catches on fire.

> I had never seen a real vintage tee up close before. I had no idea how intoxicating soft cotton and a faded print could be. ​

This purchase was more than just a lucky break. It was the first time I bought a piece of clothing that actually meant something to me. It made me think of all the hours I spent watching *Mary Tyler Moore* reruns on Nick at Nite. I was in awe of this magical woman who was such a boss that her production company produced her show. The shirt wasn’t expensive. It wasn’t made in Italy. And unless you were a TV buff, you wouldn’t understand its significance. But it made me happy every time I put it on. It said something about who I was. It gave strangers a glimpse into my personality without my ever having to say a word.

At 21 I had finally figured it out: my fashion should help tell my story.

I also realized my newfound love for thrift shopping wasn’t too different from my mom taking me to her friend’s house all those years ago to try on her daughters’ clothes. In both cases, I was filling up large plastic bags with stuff someone had either grown out of or no longer wanted. The very thing I used to be ashamed of had become one of my favorite pastimes. Now I think of it as a twofer — because not only am I getting a bunch of great clothes for very little money, it’s also a gentle reminder to call my mother.

I’m 31 now, and I admit I still spend way too much money on clothes. But I try to spend large amounts only on signature pieces that I know I’ll keep forever. I’m convinced that’s a lesson no one really learns until they turn 30. I don’t know what it is about that age, but all of a sudden you just have an aversion to spending money on trendy overpriced clothes.

My style continues to evolve, but these days, harem sweatpants, vintage T-shirts, and Jordans are in heavy rotation. As I get older, I want to be stylish *and* comfortable. I still haven’t quite figured out what “lesbian category” I fit into. I’m guessing I’m either a Soft Stud or a Justin Bieber. I know “Justin Bieber” isn’t a real lesbian category, but he and I have a very similar style, so I think he should be. Yeah, that settles it — I’m definitely a “Justin Bieber.” Lifelong mystery solved.

*Lena Waithe is a writer, producer, and actress, and she’s currently obsessed with a show on BET called* Chasing Destiny.​