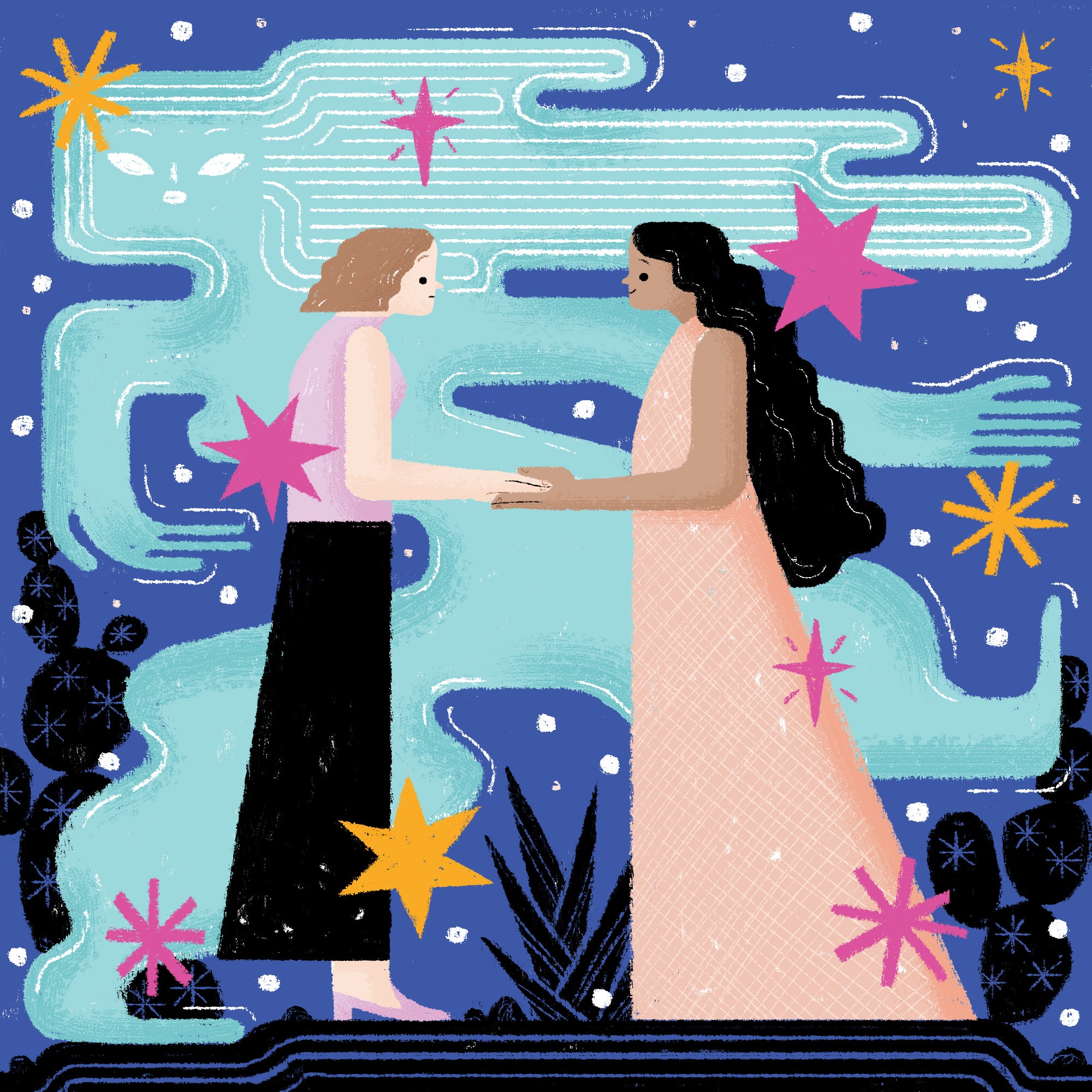 I’m in Sedona, Arizona, where today’s psychic gazes at some point across my right shoulder, la-la-la-ing to herself. She is a young woman with long hair, in a loose cotton dress. The other psychics I’ve seen in my West Coast psychic quest have been surprisingly suburban. Coiffed, scarved, in department-store dresses, they collectively put me in mind of a principal at a mildly hip elementary school.

This one — Mari — would have looked at home at Woodstock. Her la-la-las trill out as I ask her questions.

My main question has to do with my grandmother, who is long dead. I’ve been visiting psychics to see if I can find her.

“I see her,” Mari says, still rapt by whatever it is that sits above my shoulder. “The most important word to her was ‘freedom.’ She cared about her family but cared a lot more about traveling. And she had some kind of second sight.”

All of which is, remarkably, true. Mari also tells me that my husband and I cut off money from a member of our family, which we’d just, days ago, had to do. It’s upsetting, she says. We wonder how he’ll do without our financial support.

Which is pretty much the theme of every conversation my husband, Bruce, and I have had in the last forty-eight hours. Mari mentions that Bruce and I once went together to a haunted place called the Hay House. At this point, she’s so accurate, I’m giddy.

I’ve seen multiple psychics before Mari, and watched them cast around and flounder, giving me a milk-and-cookies version of my grandmother before backtracking. And I’d chosen to visit Sedona — the capital of New Age — in the hopes that, with all of its crystals and energy spirals and aura readings, I’d find a psychic who seemed worthy of the name.

The previous psychic I saw was a middle-aged blond named Julie. Julie threw her head back dramatically when considering my questions (I had paid for three, at fifteen dollars a pop, and written them out on little cards). Then she said, with a squinched-up face, stuff that must have sounded likely to be true, but wasn’t: Your grandmother just doted on you, didn’t she? She was a warm, loving person, wasn’t she?

By the time I found Mari, I’d spent a year visiting psychics in search of my grandmother, May. May believed in spirits, conducted séances, and practiced table-rapping, using my mother and her other children as séance partners. My grandmother spoke most often to a spirit named Simon, who rapped on the table she used for this purpose: two raps for yes, one for no. May told me, and my mother backed it up, that the Simon table would sometimes express itself by flinging itself across the room.

The best way of finding May, I reasoned, was to see if she could let me know of her presence through a psychic or a medium. Not that I began this quest really believing in such things. At most, I was willing to be convinced.

Why do this? After my mother’s death, in 2014, I decided that I needed to speak to my grandmother, or at least experience her, again. She was the strongest and most independent woman I’ve ever known, worlds apart from my quiet, timid mother. May liked her family well enough, but, as Mari pointed out, she loved the rest of the world more. She had a fierce drive to travel, to try everything, even if it meant staying in an Amsterdam brothel, as she once did, because the room was cheap. She smoked opium cigarettes. At 79, she trekked across Kenya. Her appetite was for life, for experience, for living wholly. I lacked her ferocity but had inherited her restless spirit.

I was a high-school dropout with a drug problem when my grandmother and I had our most intense conversations. She told me about what she termed her “metaphysics,” which amounted to the mind’s power over the physical world. She taught me about our ability to transcend the body, by which, I can see now, she meant her gender. Born at the end of the nineteenth century, she lived as few women of her generation did. She told me the mind was everything and that it never ceased to exist. As I grew up, kicked drugs, and finally went to college, at a newly sober twenty, May, with her astonishing lack of fear, became my guide. If existence never ends, I felt, I could always change the terms of mine.

After my session with Mari, at a New Age emporium loaded with crystals, I drift back into the store. Reading the signs, I learn these crystals can do things like realign my chakra and my heart and my uterus, or, if that’s not enough shifting-around of my innards, I can buy a chakra-balancing spray. Or purchase some shungite, a Russian mineral that protects from the harmful rays of Wi-Fi signals and laptops. Shungite is all over the place here, though the store has Wi-Fi, and plenty of salespeople tap furiously into their phones.

I hunt through the store for a crystal necklace. I choose one that has different-colored stones falling like an ambling river. I spend almost $200, which is the most I’ve ever spent on jewelry. A slip of paper says the piece will bring out my beauty and my wisdom. As I loosen the chain from its neck-like holder, I am ready to accept anything. The reading with Mari leaves me caught up in a bender, drunk off my newfound belief.

The day before the visit to Mari, Bruce and I took a vortex tour through Sedona. Vortexes are “energy centers,” sites that gained their status during 1987’s Harmonic Convergence. The concept of the Convergence spun out of an unusual and confusing alignment between the solar system and the Mayan calendar. Thousands poured into Sedona to meditate together and seek energy from designated sites, all in the service of ushering in a new period of planetary peace. The vortex tours are supposed to fill you with this energy. And to make your psychic self, as I understood it, receptive. Our guide was blond and conservatively dressed. I’d imagined being picked up in a 1960s van — maybe something like the psychedelic van in *Scooby-Doo* — but she pulled up in a dowdy sedan. I was back with the mildly hip principal again.

We didn’t feel any energy. The guide told us not to worry about it. And then she asked us if we noticed the Hindu god Ganesh looking down on us, in the guise of an elephant-headed rock? We did not notice Ganesh looking down on us. The only notable thing we saw that day was a bearded man at one vortex site. He wore a loincloth and had chained himself to a tree by a hook through the septum of his nose.

I’m still not sure how I felt about Mari’s reading, after that first intoxication wore off. She seemed to see my grandmother, but did that mean my grandmother was present? I can imagine May flitting through the afterlife as she had done this world, wanting to see everything, never touching down. It was perhaps enough to know that her ferocity and strength were still visible. I have not seen any psychics since that reading. I may go again, but the quest seems less urgent now. I have a necklace, and a sense that maybe May was right: the universe, like her, is greedy, and hates to let things go.

*Susanne Paola Antonetta, author of* A Mind Apart, Body Toxic, *and* Make Me a Mother, *is currently completing a book about the search for her grandmother.*