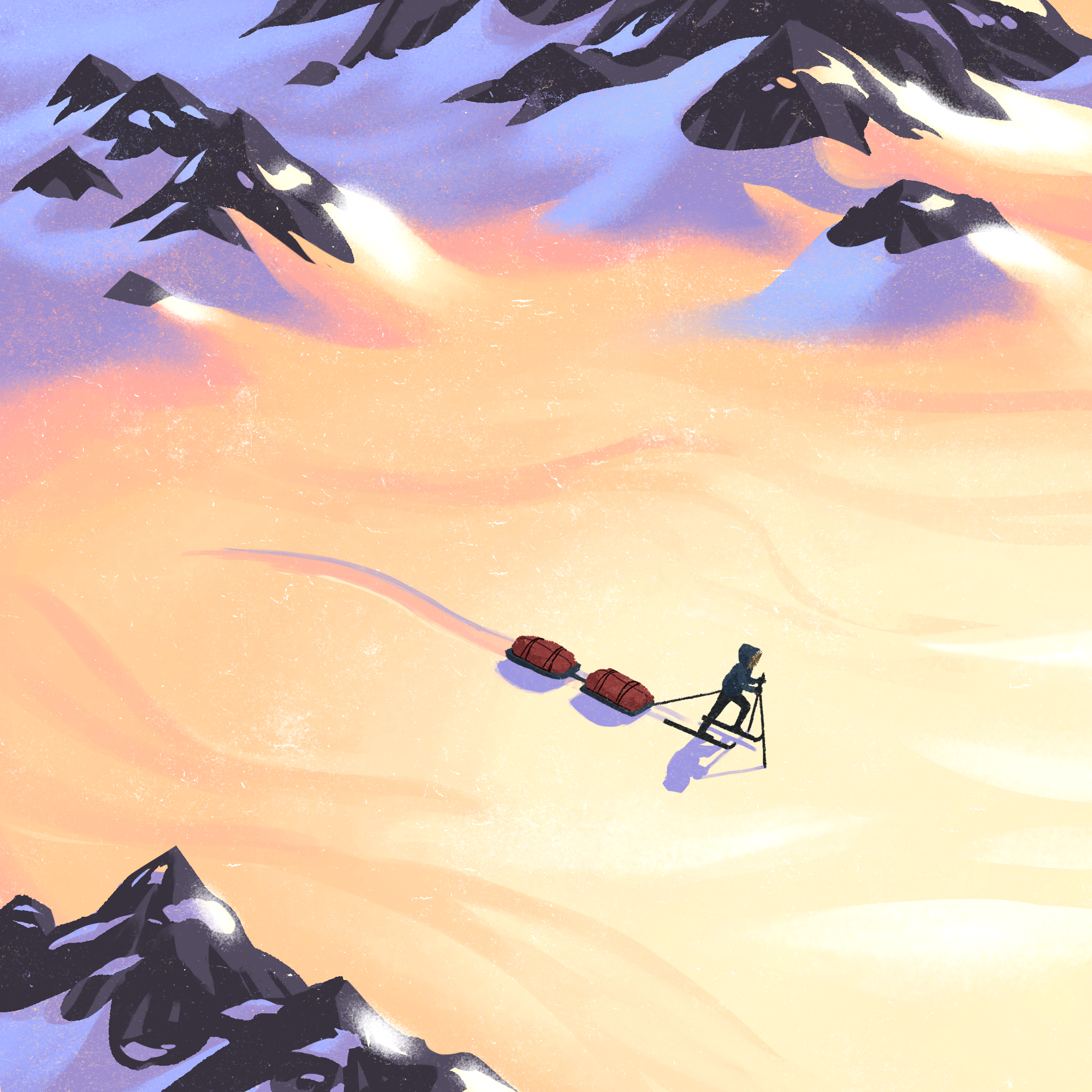 As soon as the plane that had dropped her onto the Antarctic ice departed, Felicity Aston sat down in the snow and wept. “I cried from my soul,” she wrote later in her memoir of her solo expedition across the frozen wastelands at the bottom of the world, * (4)*. Her tears froze on her face and fell into the snow all around her. The panic rose in her chest. She started trembling and couldn’t remember how to erect her tent. Yet somehow, she found the strength to build her shelter and go to sleep. The next morning, she got up, put on her skis, and set off toward the horizon. Overcoming her emotions and the physical reaction to her fear, she says, was almost harder than being the first woman to traverse the entire continent alone.

Felicity Aston isn’t the stereotype of a polar explorer – in the popular imagination, that’s a 1920s man with an ice-crusted beard and a husky-dog companion. Yet this macho cliché couldn’t be less accurate — women have been involved in polar expeditions for centuries, as explorers, scientists, historians, and fund-raisers. “The story of women in Antarctica stretches right back — I think it’s 1775 that the first woman was recorded as going there,” Aston says. (5), though Maori women may have explored the region earlier).

After a decade working as an explorer and researcher, Aston joined the ranks of the great polar heroes when in 2012, at age 35, she became the first woman to cross Antarctica alone. She skied a distance of 1,084 miles in 59 days. She has a string of such achievements to her name: in 2006, she was part of the first all-female team to cross the Greenland ice sheet; in 2009, she led a team of Commonwealth women to the South Pole; and in 2015, she received the prestigious Polar Medal from the Queen for her exploration work.

When we talk over Skype — she is currently based in Iceland, where she is preparing for an expedition to the North Pole next year — Aston says that she is baffled as to why the widespread perception remains that her field is exclusively male. “There are women who have done spectacular things in the polar regions, but nobody’s heard of them,” she says. Aston is a brusque, businesslike person with a very warm laugh. Even over Skype, I can feel that her immense determination is always just beneath the surface.

She cites the example of Ginny Fiennes, who (as far as Aston can determine) was the first British woman ever to spend an entire winter in Antarctica; in 1987, she became the first female recipient of the Polar Medal in recognition of her pioneering work in radio signaling. Yet (6) records her as the “muse of a British explorer” and includes almost as many details about her husband, the explorer Ranulph Fiennes, as it does about her own work. “It’s the age-old conundrum, and I don’t have an answer to it,” Aston says. Representation in polar exploration and science is improving all the time — five of the 46 winter residents at the South Pole this year are women, and in 2005 there were 24 out of 86 — but the idea that it’s a male-only field lingers.

Aston is now 40. She comes from Kent, in the south of England, and first moved to the Antarctic Peninsula to work as a meteorologist when she was 23. Over the three winters and two summers that she lived there, the landscape captured her imagination. The colors alone were enough to bewitch her. We may think of the polar landscape as a monochrome stretch of white, but Felicity recalls the pink, orange, and indigo of the sky, and wrote later of the “dusky lilac” and “vibrant ochre” she saw. She has spent the subsequent years raising funds to explore the world’s uncharted territory and research how the human body responds to extreme polar conditions. (There is much more “computer work” involved in being an explorer than people think, she says.)

Her next project is the Women’s Euro Arabian North Pole Expedition, which will take place in April 2018. Aston will lead a team of eleven women from a mixture of backgrounds in Europe and the Middle East. Other than Aston herself, none of them has ever been to the Arctic before, and if they make it to the North Pole, several will become the first women from their countries to get there. Aston put together the team via the Internet, posting details of the trip on her website and social-media accounts and inviting women to apply.

As well as aiming the ad at those with no previous exploration experience, she was also keen to put together a team with a diverse range of ages and backgrounds. “Women in their twenties and 30s tend to apply for this kind of thing more readily than women perhaps in their 40s and 50s,” she says. “Yet I’ve seen, again and again, in the polar environment particularly, women in their 50s are in many respects at their strongest in long endurance activities.” She chose those who could commit to the expedition and who could contribute something to the aim of creating dialogue between cultures. “We’ve got a really wide range , so hopefully anybody who looks at our expedition will find someone that they feel some kind of resonance with. I always think it’s a stronger message if you feel that the people going through it are somehow a little bit like you.”

In preparation, the women have undergone polar endurance training in Iceland, spending ten days living on a glacier. They also took a trip to the desert in Oman, partly to improve their survival skills and also to introduce the group to a non-Western culture. “It sounds bizarre: a lot of the challenge of crossing a desert is pretty close to the challenges of crossing a polar desert,” Aston says. “Things like the uncertainty of the navigation, the routine, they were all pretty similar. Walking in sand with a sledge is a bit like walking in snow with a sledge.”

One of her goals for the expedition is to study the effects of extreme cold on a diverse range of women’s bodies (a neglected area of research). Beyond that, Aston’s intention is to foster dialogue between women of different cultural backgrounds. She has become increasingly interested in the lack of understanding between Europe and the Middle East. “There doesn’t seem to be much support and understanding flowing either way, to be honest,” she says. “What I’ve learned over the years is that expeditions are a great leveler … once you’re on the ice of the Arctic Ocean, everybody feels out of their depth.” She hopes that by the end of their journey, everyone will have changed their perspectives a little: both the women taking part in the expedition and those who follow the team to the North Pole via social media. The team is on Twitter (1)) and will also be posting updates on (2). They plan to take some 360-degree videos of the expedition, too, which they will be sharing when possible.

Aston says it’s no accident that this, and many of her other projects, are “quite woman-centric.” “I feel a responsibility because in my own lifetime, women haven’t achieved equality in this world, and that really annoys me,” she says. “If I can apply what I do well into trying to move that on quicker, then that’s what I’ll continue to do.”

Finally, well into our conversation, I ask the question that has niggled at me ever since I first read (3), in which she was very open and honest about the day-to-day practicalities of life on the ice: what do you do when you get your period halfway to the South Pole? She laughs and says: “I get asked that a lot! A lot of women just stop their periods, so they have the injection, or they take a pill straight through, and so they just don’t have one. I’m not able to do that, so I do regularly have periods.”

You just have to be organized, she says, “so you’re not having to dig through a sledge in the middle of a blizzard” to find what you need. Aston is matter-of-fact about the extraordinary physical challenges of her job. “All of us have been dealing with periods for many, many years, and you just kind of get on with it! I mean, it’s a little bit more extreme when you’re out at minus 40,” she admits, “but no more so than it is to go to the toilet” while in polar conditions.

One of the advantages that men have over women in polar expeditions is that they don’t have to completely expose their bare flesh to the cold every time they need to urinate. “A lot of women use these she-wee things now,” Aston says. “I’ve never really got on with them very well, so I don’t use them, but I’m always very jealous when I’m working with women who do use them, because it’s like, ‘Wow, that looks brilliant!’ not having to reveal themselves.” But Arctic conditions really do even out the differences between people. At some point, everyone has to shit. “We all need to do what we need to do, and there is no getting around the fact that you will be exposed,” Aston says. Again, she takes it in her stride. It’s no worse than wearing the same clothes for months on end, she says (which isn’t as bad as you would think because the human body doesn’t really sweat at extremely low temperatures).

The data that Aston and her team capture about how women’s bodies operate in extreme environments will feed into the research that will lead, in the future, to interplanetary exploration. She is pleased to make a contribution but also slightly frustrated that she can’t yet get out there herself to explore the universe. “I am very annoyed that I have been born maybe just a little bit too early to be involved in venturing out beyond our planet,” she says. Her appetite for new challenges and horizons is extraordinary. When I suggest that she will be the first woman on Mars, she says, “I would love it — I would be there in a flash!,” and I believe her. If she can find a way to walk on a new world, she will.

*Caroline Crampton is a writer based in Liverpool in the north of England.*