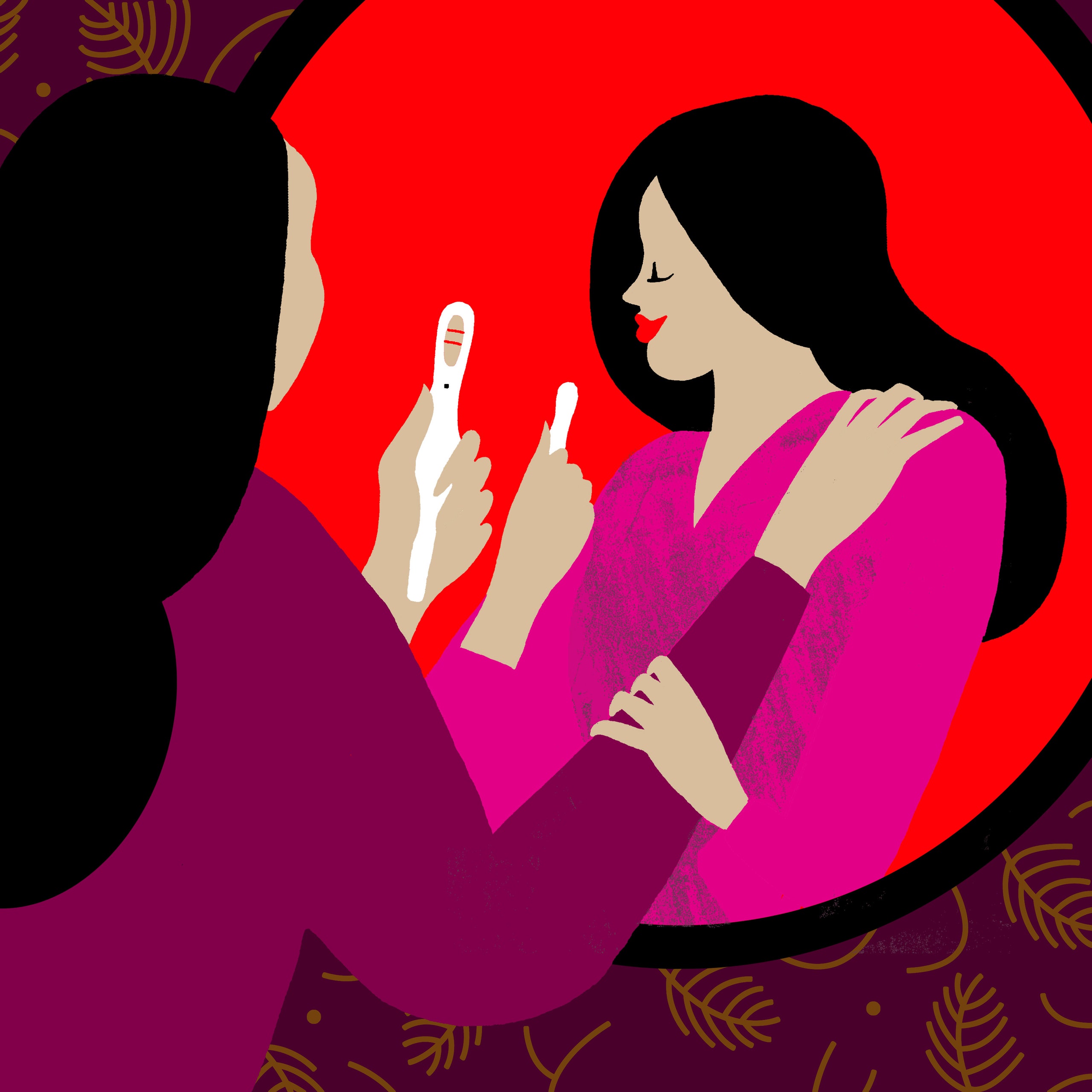 I took the C train to the fertility clinic near Columbus Square for my first IUI. IUI, or intrauterine insemination, is colloquially known as “the turkey-baster method” for getting pregnant. I remember being proud of myself for not taking a taxi. I was going to be a pragmatic and financially responsible mother, and my transportation choice that day was my personal validation that I could have a baby on my own.

I decided to become a single mother because I was about to turn 35, which is the age when everyone tells you that your fertility starts to wane. And even though I didn’t have a partner, I’d always known I wanted to be a mother.

As I sat alone in the fertility-clinic waiting room, I looked around. The stakes are high — everyone is deeply invested in having a baby, and some have been trying, and failing, to get pregnant for years — the fear and disappointment are palpable. This was not the picture of motherhood I knew from cereal commercials and prime-time sitcoms.

When my name was called, I was greeted by a nurse who handed me a folder of forms to sign. She then pointed to the section that was to be completed by my husband. The word husband had never sounded as offensive as it did in that moment. I wanted to tell her that my husband would be happy to take those tests … if I had one, and she might want to actually read my chart before drawing my blood.

That first IUI did not work. I hadn’t expected this. I thought my decision would put things into motion, and this felt like failure.

Even more unfortunately, I was asked about my husband again on my next visit.

The best advice that was ever shared with me in the early days of my attempts to have a child was, “You’ll need to learn to advocate for yourself.” The lack of personal attention to detail at the first clinic repeatedly left me feeling frustrated, angry, and defeated. I took this advice to heart and decided to find a new doctor, one who supported my decision to have a child on my own, or at the very least did not openly offend me. I found one who was entirely familiar with assisting single women to achieve their goals, and he remembered my name and my marital status each time I saw him.

After my fourth IUI, I found out I was pregnant. I know now that this is fairly typical, and that IUIs rarely take on the first try, but at the time, each month felt like a lifetime. I heard the heartbeat at six weeks. At ten weeks, I went into my appointment thinking I was going to have blood drawn that would quickly reveal the sex of my first child. During the routine sonogram, I watched the doctor’s face fall. It was not dramatic, it was slight: a reaction that I am sure took years and years of practice to achieve. He informed me the heartbeat was no longer. We then made arrangements to schedule a (1).

I walked out of the building in total shock. I could not see straight or register sounds around me. I had never felt such heartbreak, and I carried that feeling and the unlucky pregnancy onto a flight to France only a few hours later. I had to publicly smile through Paris Fashion Week, only to retreat to my hotel room and collapse in tears anytime I could steal time. I cried myself to sleep every night as I mourned alone.

Following the D&C, healthy and ready to try again, my doctor and I decided in vitro fertilization was the next best course of action. IVF is much more invasive than IUI but also seemed like cutting to the chase. In IVF, a doctor hyper-stimulates the ovaries to produce more than one egg a month, then retrieves them, fertilizes them outside the body, and transfers them back. He made this suggestion as the “quicker” route to achieving my goal rather than a necessary one. I was lucky enough to have insurance that covered this form of treatment (a rarity in the United States), so the decision was an easier one for me.

> The previous fifteen months had taught me that nothing in life is
> guaranteed, that I could handle anything, and that we all deserve to
> make the choice to be happy.

By this point, more of my social circle was becoming aware of what I was doing. The most common response was, “You are so brave!” I am certain this was meant to be a positive and encouraging sentiment, but it made me cringe. I wasn’t trying to prove anything, and I doubted women with partners were praised for being “brave” when having a baby.

There were a few people who said things like, “But you’re so young!” or, even worse, “But you’re so pretty!” Again, cringe. The implication here was that there is a set amount of time that a woman should hold out to secure a relationship before having a child and that I still had “time.” That my looks were somehow related to why I wasn’t married was too much for this feminist to bear.

Then there were valid if not fully thought-through concerns like, “How can you afford to do that?” I responded by communicating the point that there are literally millions of single mothers already raising strong children on very little — I’m not the first, and I won’t be the last. It’s both ignorant and classist to act like being a single mother is a bizarre or impossible thing.

One successful round of egg retrieval and three unsuccessful embryo transfers later, IVF did not produce a pregnancy. The level of disappointment I had endured by now was remarkable. My doctor said I had no identifiable signs of infertility but that I might be the unluckiest patient he had. While I was pleased to know there was no hard-and-fast limit to my ability to procreate, no one wants a losing hand. I managed to keep going with the support and guidance of friends who were similarly challenged, although they had partners by their sides.

I had to accept that I had no control over the situation, except to keep trying. And I kept pushing on. I reverted back to IUIs as the procedures were less expensive — there’s a dollar cap for fertility treatments, and I didn’t want to exceed mine. It was also less invasive physically and mentally.

The blood tests to detect ovulation, the ordering of sperm-donor vials, the insemination by a stranger was all routine at this point. I had been trying for a viable pregnancy for a little over a year. I was now numb to the reality of it all, but I kept going.

At the time, my office was across the street from a Planned Parenthood clinic. I passed it every day as I walked from my subway stop. On Tuesdays, there were always protesters standing on the corner near the entrance. They held hands and raised cardboard signs with hideous staged photography and taunted women as they walked through the doors into safety. There were always two people in blue vests draped over their civilian clothes standing guard and assisting the women as they passed this menacing group.

Every Tuesday, I walked myself over and very loudly thanked these volunteers. I would get angry and tearful and felt it was my own personal form of peaceful protest to protect the right of a woman’s choice, no matter what that choice might be. I finally decided I should join these people, and I signed up to become a volunteer myself.

I was two hours into an eight-hour Planned Parenthood Activism Council volunteer-training session when I realized there was a sliver of a chance I could be pregnant. It occurred to me that I should have started my period the day before. I tried to pay attention but found myself making hourly trips to the ladies’ room to check on the situation. By the time I got ready for bed that night, it was still a possibility. I thought I couldn’t handle another disappointment, so I could not bring myself to take a test. I went to sleep, only to wake up at 2 a.m. NEEDING TO KNOW. Then it happened, alone in my bathroom with only the mirror to respond. I was pregnant.

My daughter, Willa, is now a year and a half. To say she is the center of my heart is a wild understatement. She is brilliant, beautiful, and strong. When she was still just a tiny being in my belly, I decided I needed to raise her near the ocean, as I had been raised. At four months pregnant, I left my beloved job and my home of fifteen years to move closer to my family in California. The previous fifteen months had taught me that nothing in life is guaranteed, that I could handle anything, and that we all deserve to make the choice to be happy.

Along the way, the thing that always helped me was hearing other women’s stories — it does to this day. We all find comfort in community and the knowledge that we are not alone. I have made some amazing friends throughout my journey into motherhood. We’ve all taken different paths to the decision; we all have different priorities; we all differ in how we conceived and of course how we parent. More than once a month, someone I know asks me if they can share my phone number with a friend who is thinking about having a child on their own — and I always say yes.

I feel immense pride knowing my daughter was not the last stop on the bus, not the end of a journey where I had searched high and low for a man to “choose me.” She was born from a place of confidence and certainty. She is what I was waiting for, and I was willing to do whatever it took to get her here.

*Kelly McCauley is a mother. She lives in California, surrounded by a family she loves and a community she chose. To learn more about living that single-mom life, in practicality and adventure, follow Kelly and a tribe of powerful mamas on Instagram: (2).*