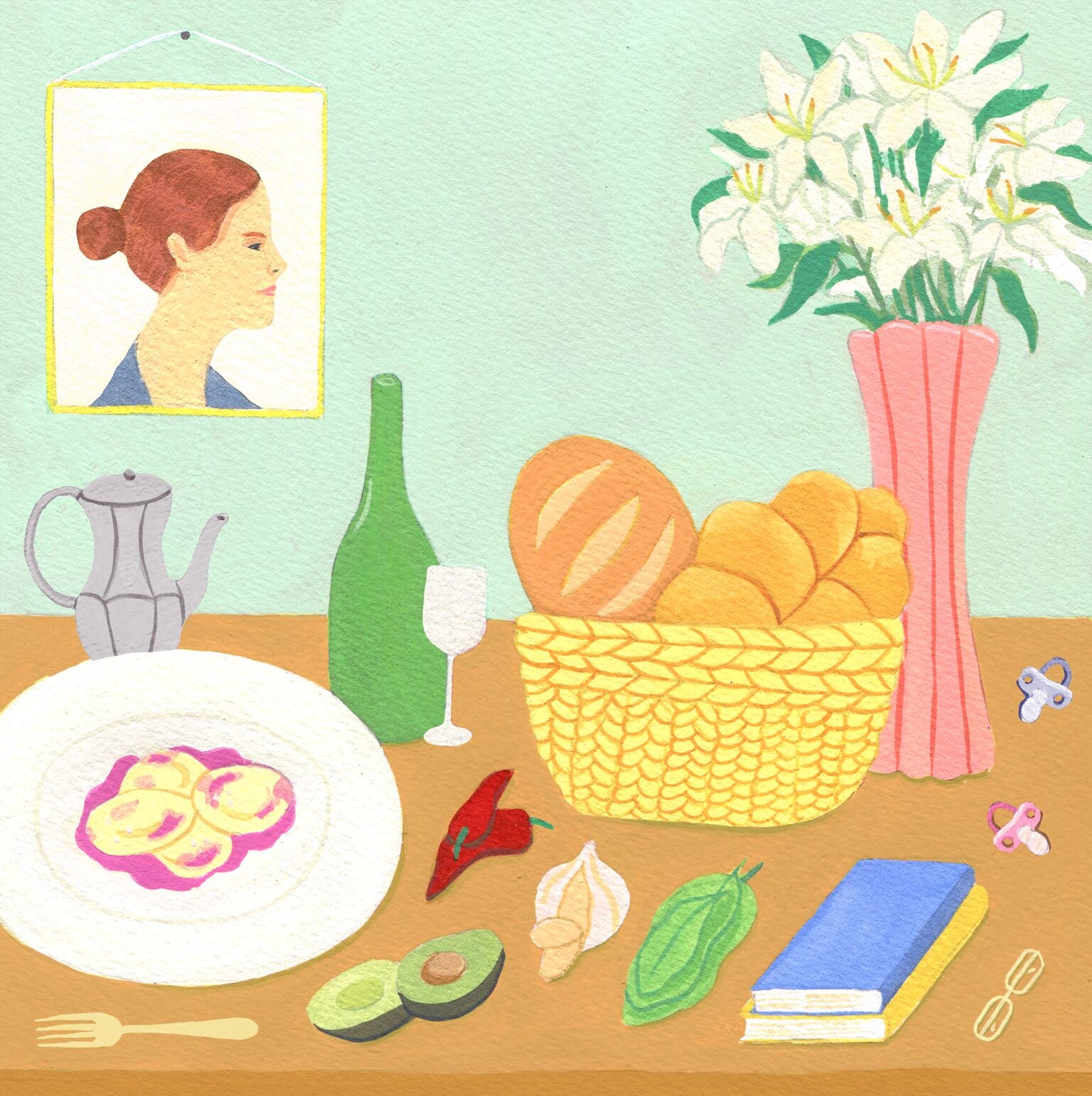 Elena Reygadas is the owner and head chef of Mexico City’s Rosetta, a restaurant so reflective of her personal taste that it’s like coming to her home. Set in a large _porfiriano_ mansion in the leafy neighborhood of Roma Norte, diners are spread among its rooms and courtyard, decorated with plants and whimsically painted with birds and flowers. Reygadas, who was named the best female chef in Latin America in 2014, invites you to a space she has lovingly curated, with the goal of making you “feel well in every sense.”

Rosetta is an Italian restaurant with Mexican elements. Or perhaps it’s a Mexican restaurant with Italian elements. The bread you’re served may be focaccia or pan de pulque. Your tagliatelle may be flecked with chile de arbol, your dessert bursting with cactus fruit and cacao or infused with olive oil. Reygadas’s voice speaks so clearly through her food that while the flavor combinations may be unexpected, they harmonize as if they’ve been served together for centuries.

Reygadas has built a small empire, with four restaurants and a baking business that distributes her much-admired bread and pastries through Mexico City. As confidently as she has paired Italian and Mexican cuisine, Reygadas has rebuffed pressure to remake her restaurant in a manner that might elevate her to a still-higher level of fame.

I spoke to Reygadas from a perch above Rosetta’s kitchen.

**Laura Tillman:** When did you realize that you wanted a career as a chef?

**Elena Reygadas:** I knew I wanted to go to university, and I studied literature. I saw cooking more as a way of life and something I could do even if I had another career. I was very interested in nutrition, and I always cooked for friends and at home. I never stopped cooking. When I was finishing my degree, my brother, he’s a filmmaker, his first film he asked me to come and do the catering. That was the first time I cooked with responsibility, with real responsibility. I thought, _I think this is what I want to do, I want to cook, but I want to read all my life._ I want to be doing this. I want to cook for others, I want to have the responsibility of organizing a meal.

**LT:** It seems very different to cook for friends as opposed to doing it as a career. What was it about cooking with responsibility that made you realize you actually wanted to do this as your work?

**ER:** As you said, it’s really different that you like to cook, and then that cooking will become your way of living. I never thought, _Yes, I like to cook, but it’s too much work,_ or _Restaurant life is really difficult._ I just felt like, _I love the adrenaline; I love the teamwork._ And I remember at that point I thought, _I love to cook and this is what I want to do,_ because to read, for me, is something personal and intimate. Of course you can share a book with someone, but when you cook you share that with everybody instantly on every level.

**LT:** When you were working in London at Locando Locatelli, you decided to return to Mexico City to raise your daughter. Was that a hard decision to make?

**ER:** It was a really hard decision to make. When I got pregnant, it was a surprise for me. I was really feeling that having a daughter was going to interfere with my career and my cooking, which I loved. I was confused about how I was going to deal, between my daughter and family and my passion. I loved London, I was really happy to live there, but I felt that if I stayed there it was going to be really difficult to continue with my career.

In Mexico it was going to be easier, because I have my mother, my friends, who would help me care for my child, and I was going to be more in my environment, so it was going to be easier to combine both things. In London I was really isolated. I was with my partner and working all the time, which I loved. I’m not antisocial, but I like to be at home, I like to read, I’m not a party person. I just felt that I wanted my daughter to be more in contact with my family, my friends, how I grew up. It was a really, really hard decision, because I was happy where I worked and I was in a stage where I was starting to be given much more responsibility.

I was nostalgic and visualizing what I could do in Mexico with what I learned. I thought, _In Mexico, it’s a place with so much more opportunity._ I remember in London looking at all these vegetables that come from the Mediterranean, from Mexico, and the fruit and everything was coming from outside, except very few things. I thought, _You know, in Mexico you find all this but more_ . When I was in London, I realized how rich we are in Mexico in that sense, and how good it can be for cooks to have such biodiversity. I started to visualize that if I was in Mexico I could do this and this and this and not have to bring food from anywhere else. I liked the idea, but it was my daughter who held me to that. Maybe if I didn’t have my daughter, I would have stayed in London.

**LT:** What was that year like, when you were pregnant and still working in London?

**ER:** It was a beautiful year. I felt super-healthy and good, so I just kept working normally. Then at some point I just did the bread, because doing the bread I booked up my time, I didn’t have to carry heavy things, I was not in the stress of the service. I just kept working, really pregnant, really big. At the very end, when I was seven months pregnant, I was just in the office with the recipes because it was not comfortable. When I came back to Mexico, I started to do small dinners twice a week for friends. It was great because I kind of felt Mexico again — what people liked and what they didn’t like about my cooking; I got to know the vendors. It was a really nice time. I started to adapt what I knew to Mexico, and it was really different because of the altitude.

**LT:** Did you always know that you wanted to have your own restaurant, or do you think you would have been happy to continue to work for other chefs?

**ER:** I always wanted to have my own restaurant and my own bakery. That was really clear in my mind. I never realized what that implied, the amount of responsibility, the amount of work, the amount of discipline. At that point I felt that I worked a lot, but I didn’t have responsibility. All these things change when you become an owner and have your own place. Maybe if I realized that I would never have done it. Because I thought, _I’ll have my small restaurant and do my things,_ do this and do that. I never realized, never felt, and never thought of what I have now. It just happened. Then I thought, _Oh my God, this is huge._

**LT:** I’m curious, what was it like to be selected as best “female” chef? Cooking isn’t like competitive swimming; there’s no inherent reason for a separate category.

**LT:** What have you learned that you wish you could tell a 25-year-old version of yourself, in terms of your relationship with outside approval?

**ER:** For me, cooking cannot be judged as No. 1, No. 2, No. 3. It’s not a career of athleticism. For me, cooking is a way to express who you are and what you care about and what excites you. It’s something really personal. My clients come here because they enjoy the feeling in my restaurant. Other clients go to other restaurants because they are attracted to the feeling there. But that doesn’t make one No. 1 and the other No. 2. It’s like if you prefer blue or white. I would tell young people, really trust in themselves, in what they are and what they like. When you trust that, it comes more naturally. Maybe you will not be on that list because you don’t have that kind of profile. But you will have your inner list, with the people who are connected to you in that way.

_Laura Tillman is a journalist living in Mexico City. Her first book,_ The Long Shadow of Small Ghosts: Murder and Memory in an American City, _was published in April 2016 by Scribner. Follow her on Twitter (1)._