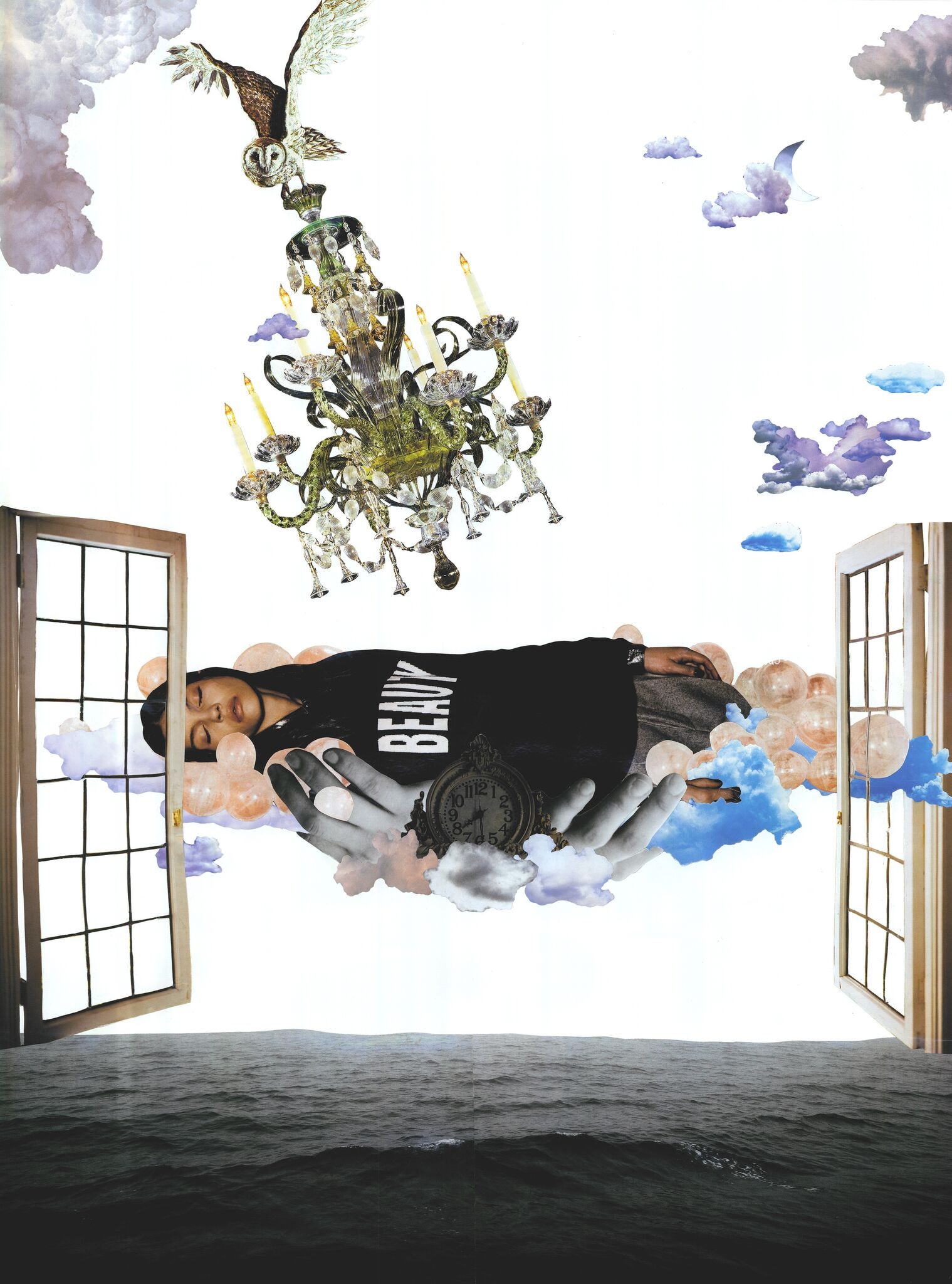 ​In 2007, I was a 27-year-old living the sweet life in Chicago, with an interesting job, fun hobbies, and a newish boyfriend I adored. Then I got a cold I couldn’t shake.

I haven’t always been the best advocate for my own body. I was a too-tall, pudgy child who felt completely out of control of the genetic lottery ticket she’d been given, so in retaliation I shut down. I ignored my body and hated it for not being tiny and cute like my friends’ bodies. As I matured, I understood myself as amounting to little more than an unappealing object. I let my body know who was boss by getting piercings and tattoos. Not everyone who gets piercings and tattoos does it for this reason, but for me, it was an attempt at controlling my physical form in some capacity. I stayed up late. I developed a tough-as-nails persona. I wore lots of eyeliner. I had fun.

So when this cold came along and wouldn’t leave, I reacted how I always did when my body behaved in a way I found unpalatable: I ignored it. I went to work, to dance classes, and out on dates, exhausted and miserable. I had to take breaks while walking to the train. Random parts of me hurt. I told no one. Since my body wasn’t worth much to me, I figured it wasn’t worth much to anyone else either.

When I started having trouble breathing, I called out of work and drove myself to the walk-in clinic I’d been treating as my doctor. It was mid-afternoon. I waited around a bit, wheezing on the uncomfortable chairs. When I finally got into an exam room, a nurse took my vitals and fetched the doctor immediately. The doctor put me in an ambulance. Once I was in, insisting I hang on to my purse, the EMTs requested I be sent to a closer hospital because “the patient is in respiratory distress.” That was news to me.

I was checked into the hospital, and even as I rolled my eyes at how everyone was overreacting, secretly I was relieved: there _was_ something wrong with me, and now, under someone else’s watch, it would be fixed. I called my boyfriend and told him where I was but that he shouldn’t worry, it was nothing. _It was nothing._

The next day, I was placed in an induced coma so the doctors could keep me alive while they figured out what was wrong with me. My vitals were unstable. I didn’t leave the hospital for almost a month. I had lung surgery. I was under for about 12 days, and I emerged dotted and crisscrossed with scars. I don’t pretend to represent the legions of people who have been in a coma, but here are some of the insights, profound and ridiculous, that I got out of my time under.

**Comas: Movies Versus Reality, Part One.**

I don’t remember being put into the coma, but I do have a lot of weird memories from being under. This may be because I was in a coma via medicine rather than trauma. That time period played out for me as one long rambling dream where I was at a hospital to visit my boyfriend, who I thought was in an accident. Weirdly, several details of my coma-vision version of the hospital were accurate: the lights above me, the fact that my boyfriend was wearing glasses (which he never does outside the house), the constant presence of nurses talking medical jargon. At one point, I became convinced that I was locked in a facility against my will and started plotting my escape. My main oppressor was a male nurse with hands made out of Jolly Ranchers, which in reality was probably the sticky surgical tape that was all over me, keeping all my monitors in place. It’s fascinating what the mind will do to make sense out of confusion.

I had things shoved up inside me to collect my waste, which was a fun discovery once I was awake. My nails grew out gorgeously without me there to bite them. All the random hairs I take care to pluck every few days grew unbidden, unfurling themselves dramatically. Once I was awake, I blamed the coma. My friends, because they’re great, agreed that must have been it.

**People Invent Personalities for You.**

I have multiple tattoos. When I was hospitalized, I had purple-and-platinum-dyed chunks in my hair. The hospital staff, who never got to speak to me or watch me eat a burger, had only these clues to go on to figure out what kind of person I was. The lab techs and nurses and doctors who all worked their asses off to keep me alive also invented a very sassy personality for me. I’d like to think I _can_ be somewhat fun at parties, but I’m mostly prone to deep talks and watching birds in my yard. Plus, I had been through a very intense experience and was attempting to process it all at once, which made me less cheeky than usual. They’d come by for high fives from the awake version of me and be shocked when I’d either be crying, staring at the TV blankly, or snarling at them. I think they thought I’d be fun. It took me a few months to remember to be fun again.

I worked so hard to keep my body as a separate thing from myself, as a nothing, a thing that was too large, too unsexy, too unsavory, too embarrassing. It’s ridiculously poetic that I got my wish. I woke up with a body that I couldn’t feel, as parts of me were numb. I woke up with a body that wouldn’t respond to my commands, as it was incredibly weak. “You got what you wanted,” my body clucked at me. “Happy now?”

From the vantage point of my hospital bed, looking down at this poor, tortured object covered in wires and scars, I was saddened at how much it had been abused. This wasn’t a sex-delivery system that was either hot or chubby or perfect or pale — this was the collection of bones and muscles and organs that carried around my brain and my heart. It took being introduced to my body as an actual object, an object I had to become reacquainted with, for me to understand the worth of my physical form.

In the less than two weeks I was under, my muscles atrophied to the point where I couldn’t hold a cell phone. I had to strengthen my muscles enough to walk again. I had to sit down in the shower. All those movies where characters wake up from comas and start doing kung fu or singing and dancing are complete bullshit. It took me a month to work up to walking a block. If we ever watch _Kill Bill_ together, I will point this out to you several times during the scenes where Uma Thurman’s character wakes up from a coma and wills herself to walk again.

I was fairly determined to not let almost dying affect my life. I thought I was too badass for that kind of sentimentality. I even published a very naïve essay about how much being in a coma didn’t change me. And while it’s true that I don’t break-dance into every single sunset with the passion of the formerly comatose, of course I changed. There is no level of professional rejection that can compare to almost dying. I’m still anxious about chances I take, sure, but I am no longer grappling with “What if they don’t like this thing I created?” because what the fuck do you think you can say to me that will compete with a coma? I became so fearless that I married my boyfriend in a manic haze three months after getting out of the hospital. We’ve been together eight years now.

A few months after getting married, my new husband and I decided to move to Brooklyn. He wanted to pursue standup comedy as a career, more than just a hobby, and I have always wanted to live in New York. My fearlessness was catching, it seemed. We moved, with little savings and no real plans, into the chaotic maw of NYC. The old me would have been watching all of it happen from afar, quick with witty retorts about how poor we were. The new me was firmly in my body, experiencing it.

_Emily V. Gordon is a writer and comedy producer living in Los Angeles. She currently writes for_ The Carmichael Show _and produces_ The Meltdown with Jonah and Kumail _for live audiences and Comedy Central, and her book_ Super You _is in bookstores now._