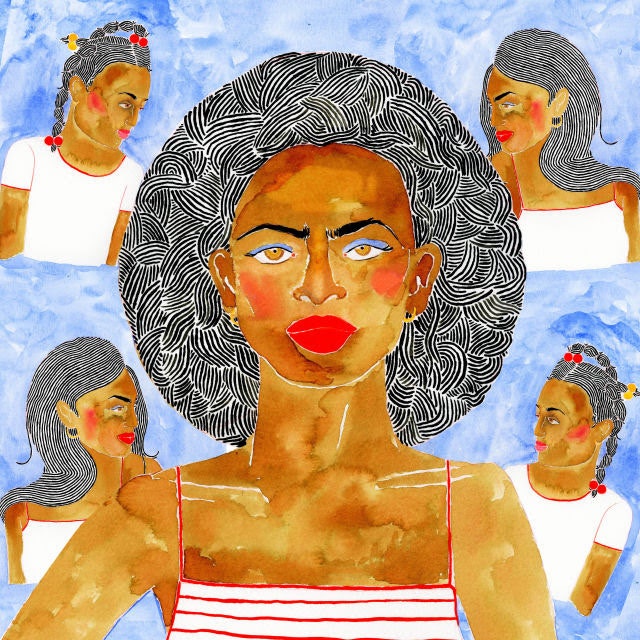 For most of my childhood, I was deeply obsessed with Rudy Huxtable’s hair. Rudy, one of the few non-mixed black girls on television, had natural hair that looked an awful lot like mine after a good wash ’n’ blow dry.

“Mo-oom, can I *please* just wear it puffy today?” I begged. “Puffy” is what I called my hair after it had been washed and dried, before it would be straightened. I pessimistically watched my mom warm up the electrical hot comb in the bathroom mirror’s reflection. It was picture day in second grade, and I already knew that I preferred the puffy version of my thick black pigtails over the straightened version.

“Today is picture day. You want to look well put together now hold your head up so we can go!” she responded in a run-on sentence mastered only by black moms. Ever compliant, I held my head up with eyes closed, nervous system bracing itself for the hot iron teeth that would undoubtedly make contact with my scalp. When it was all over, I opened my eyes to see one long pigtail thoughtfully hanging to the side, another pigtail back and centered, both held by matching Goody hairballs.

Today, I look back at that picture and chuckle victoriously each time. Because for all the commotion around straightening every hair on my head, pictures were taken after recess. Sweat and wild-child zeal for life had devoured my straightened hair. Frazzled and kinky hairs are celebratorily sticking out of my hairballs in every which way. My smile is an unmistakable sign of satisfaction.

I knew I wanted natural hair all along, beginning with some unusual fireside chats I’d have with my otherwise-wordless father. During the early years, when he enjoyed a single beer in His Chair after a long day of work, watching reruns of *Good Times*, he’d say something like, “Florida’s hair looks just fine. More of our women should just leave their hair alone!” Usually grading papers in Her Chair, Mom would put her red pen down and quip that Florida Evans doesn’t work at a school or an office or somewhere that expects Negroes to be culturally agreeable. I looked at Florida Evans’s neatly manicured Afro like a modern marvel. And besides, I’d already been determined to impress my dad with my grades and wit, so I just added “have natural hair” to the long list of things I’d devote my life to for his favorable gaze.

Thankfully, the concept of “good hair” didn’t exist in my household. This was no easy feat given my parents’ Creole heritage, ravaged with preferential treatment to any features that increase a black person’s ability to “pass.” My mom’s quest for her daughters to have straight hair was more about social politeness, and maybe ease. The concept of “natural-hair care” didn’t exist in the ’80s and ’90s, so I’d imagine having three heads of black hair to manage could get overwhelming for even the most woke mother. Nevertheless, when I got to middle school, I was shocked by the premium placed on “good hair.”

The moment my pinkie toe stepped onto Johnston Middle School’s campus, I noticed black boys’ heads turning whenever light-skinned black girls walked by. For a while, I wondered if there was some orientation handbook I was supposed to have received before the start of sixth grade to explain this phenomenon. For that year, I couldn’t figure out the mystique. I’d look at these girls’ facial features, and though they were also God’s children, I saw nothing special. Nothing exceptionally beautiful.

After a year of confusion, the first day of French class in seventh grade would explain everything. Midway through roll call, the door flung open, and in walked Jewel. She shuffled past me to take her seat, and then for the following five minutes, her Black Rapunzel hair followed. Her hair was as thick and soft as any hair I’d seen on a human to date. The jaws of the few black boys in the classroom dropped. It was probably a combination of her wicker-basket-colored skin and flowing hair, but that day, it hit me that maybe there was a sort of hair hierarchy within the black race that I was supposed to care about.

Most black girls at school had perms. I knew continuing to wear straightened hair was just another factor reducing my already-struggling coolness score, but I just couldn’t bring myself to get a perm. In fact, I wore it as a badge of pride. I couldn’t articulate it, but I knew there was a more significant premium on having the option to just wear my own hair, unaltered by chemistry and Just for Me products. I viewed perms as an embarrassing attempt for the black race to say, “Hey, white folks! We’re just like you! See?!” I had yet to see white women spending hours in the beauty salon to make their hair turn into Afros to increase their odds of gainful employment, so it all seemed so obviously wrong to me.

“You’re sixteen now. It’s time for you to go ahead and get a perm,” Mom said one night. “I already talked to your Daddy about it.” And so it was. I got my first perm after basketball practice, at a Walmart in Stafford, Texas. The electric doors zapped open, and there was the greeting lady: “Welcome to Walmart! God bless you!” *God bless my scalp*, I thought to myself. I went to my mom’s hairdresser, the only black beautician on staff. The beautician seemed both appalled and overwhelmed by my thick, coarse hair when I sat down in her swivel chair with a musty black smock draped over me. My neck muscles still contract just thinking about how tight the little neckhole of that smock was. While she parted sections to apply the lye kit on top of the layer of thick base, she’d mutter things like, “We’re gonna work this right on out.” I closed my eyes so that I could roll them without her seeing.

As the perm was applied and the burning of my scalp began, I tried to distract myself from my anger over “selling out.” I envisioned my high-school crush ignoring Jewel in the cafeteria as I playfully whipped my conked hair to one side like Cher in *Clueless*. He would share his Frito pie with me instead. This fantasy was short-lived. Every few minutes, I’d stick my fingers up to feel my transforming hair, thinking to myself, *What have I done?*

“Get some of your daddy’s Chips Ahoy cookies,” Mom said. My hair was permed, and now we were taking full advantage of Walmart’s one-stop shop by picking up a few items before heading home. I turned my head to find the bag of cookies and was startled by my hair flinging along with me. It was baffling how straight and “white” my hair had become within just a few hours. It’s like it lived in poles, only on my dad’s kinky end or my mom’s Spanish slave master’s white end. The rest of the shopping trip was uncomfortable. Every time I felt myself enjoying my new curtains of hair, I felt guilty.

It wasn’t until we returned home that I got a good look at myself alone in the bathroom mirror. Suddenly, my facial features took on a plastic version of themselves. My Angelina Jolie–esque lips were even more accentuated, almost cartoonishly big, like those candy lips that were semi-popular around Halloween time. My almond eyes used to be the eyes of innocence but now looked unintentionally sexy. Thankfully my conjoined eyebrows were still providing some grounding realness for my newfound womanly face. I’m sure some girls would have been so relieved to finally look like “the other girls,” or close, but I felt slimy. Like a con artist, a girl who had sold out to the things that really matter to her.

But God has a way of answering prayers with a sense of humor, and after a few weeks, my regular hair started growing in. I’d later learn that this is called “new growth,” when your natural hair starts growing in, pushing the permed hair further away from the roots. While most black girls could get away with waiting two or three months without getting a perm, I could barely make it a couple of weeks before my hair descended into “chicken head” territory, as the black boys not-so-affectionately started calling me. The boys had never made fun of my hair when it was natural and straightened with the straightening comb, no matter how many weeks had passed since it had last been straightened. But it’s almost as if they were in on the joke, that they knew my temporarily permed strands were just a sham.

My family and I were unloading suitcases and boxes onto my half of my dorm room when it occurred to me that I’d be living ten hours away from people who expected me to attempt to keep up with the permed Joneses. I immediately began plotting my plan for letting go of my perm. I wouldn’t go the shaved-head route because I have a dent in my head that I wasn’t prepared to defend. I would braid my hair and let my natural hair grow in over time. As if she knew what I was plotting, Mom intercepted my scheme. “Be sure to find out where you can get your hair done. There has to be a black side of town here,” Mom said, centering my computer monitor on the built-in dorm desk. “Oh, yes ma’am, I’m sure there is,” I responded, knowing that I’d only look for someone to braid my hair.

For the next few months, my hair remained braided while my natural hair grew in. Each time I got it re-braided, I’d have more of the remaining permed hair cut off. The more of my own hair I had growing out of my scalp, the more authentically I started living my life. I didn’t shyly mention that my favorite band was Radiohead. I plastered a giant Radiohead poster on my wall to serve as a talking point for visitors. In high school, I was a quiet observer, behind the shabby and unconvincing curtain of permed hair. But my budding Afro seemed to validate my thoughts and feelings, and I found myself being quite outspoken in most of my civil-engineering classes.

“So what are your plans for your hair?” Mom asked while surveying it with her eyes. I was home for Christmas break my junior year. “I’m just going to leave it like this. Natural.” My mom’s eyes continued to survey over my head, the silence building tension. Finally, she handed down her verdict: “Well … you do have the face for it.”

*Jennifer Epperson is a proud Texan living in New York. She writes essays and sketch comedy, she designs digital products in the tech industry, and she does *not* believe in laundry delivery services.*