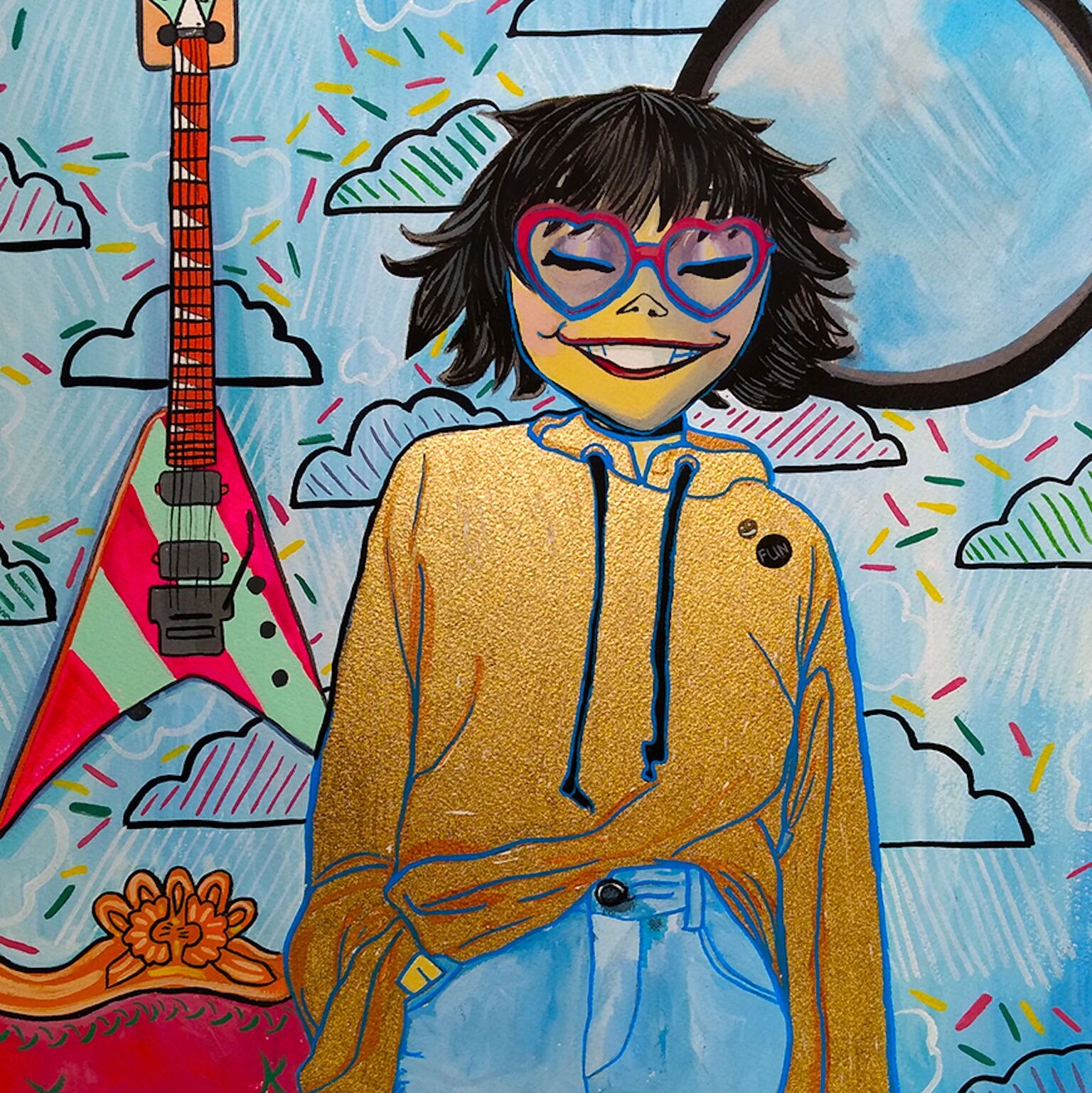 _It’s been more than fifteen years since_ (4) _released their iconic self-titled debut album and we were introduced to the coolest animated band post_ _–_ (5)_: singer and keyboardist 2-D, bassist Murdoc, drummer Russel, and guitarist Noodle, who started out in the band when she was just ten years old. Now, after a six-year hiatus —_ _and_ (6)_, which include members of the band being haunted by the Grim Reaper, discovering islands, and accidentally releasing ancient demons from hell —_ _they’re back with the release of the excellent_ Humanz, *a record tailor-made for ~the times we live in now~. It’s a perfect mix of party jams and political anthems.*

_We emailed with Noodle a few weeks before the release of the new record and talked about fashion, social media, and growing up in public._

**Laia Garcia:** You’ve been in the band since you were very young. How has your relationship with the guys changed over the years? Were there ever times you wished you lived a more normal life?

**Noodle:** What is normal? There’s nothing normal about Gorillaz, and that’s what makes us real. Life with the boys has been chaotic, but out of chaos comes art. And really dirty carpets. But I’ve weathered the storm. I started out as the baby of the band, and now I play the role of big sister, counselor, nurse, and occasionally probation officer.

**LG:** I heard you recently read _Moby-Dick_ while you were traveling. Did it inspire or influence any parts of your new record?

**N:** Not directly. But we are all a bit like Moby (the whale, not the musician), in that only a small part of ourselves is revealed above the surface. Because underneath, we are all in transition. We are becoming something new. A 2.0 version of ourselves. That’s kind of what the new record is about.

**LG:** These days, it’s common to hear people talk about social media in a negative way, but it seems like it’s become an essential part of Gorillaz’s creative projects. How do you approach it? How did the idea of the (1), which allows fans to take a tour of your studio, come about?

**N:** Gorillaz have always been at one with the virtual, and the app fits into that. Social media might get a bad press, but’s it’s not immoral, just amoral. It needs to be steered and nurtured, or it might go bad, like Walter White. That said, people really need to stop taking photos of everything they eat. Seriously.

**LG:** You recently put together (2) featuring all-women performers. Where did that idea come from?

**N:** You mean the kick-ass women playlist? Putting it together involved crate-digging, Googling, stargazing, and hanging out with collaborators. I wanted to bring a diverse mix of ladies together, united in the way they have steered music and culture on a different trajectory, if only by a degree. Of course it’s subjective, and if you strongly disagree, send me an email at [email protected]

> What is normal? There’s nothing normal about Gorillaz, and that’s what
> makes us real.

**N:** We each have our mascots on tour. I’ve got my lucky Tamagotchi. 2-D is usually growing some mould or raising a worm. Russel psyches himself up with his _Kim Sings Sinatra_ CD he got in North Korea, while Murdoc worships the severed phallus of Rasputin. You asked.

**LG:** What are some things you like to do when you aren’t working with the band?

**N:** Kicking the shit out of a punch bag, imagining it’s Murdoc. Only joking. (Sort of). Just stuff to unwind, really. Hot yoga, reading, studying quantum physics. I also do a lot of online gaming. Got fragged last night by someone called DeathKillerPsychoLord, who turns out to be a seven-year-old from Korea. Embarrassing. However, vengeance will be mine.

**LG:** You were recently on the cover of the French fashion magazine _Número_. Do you enjoy being in that world? Do you have any favorite designers?

**N:** The fashion world? It’s more of an illusion than a world. Then again, Russel thinks all of reality is simulated, so who knows. Favorite designer? There’s no way I can name just one, but right now I’m into Jivomir Domoustchiev, KTZ, Irene SJ Yu. Also Freak City LA. They actually designed some creepers for me that I wear literally all the time. Which has made showering difficult.

**LG:** Did you ever think you’d want to pursue a career other than musician?

**N:** As an infant in Japan, I was trained in multiple hand-to-hand fighting disciplines by a shadowy super soldier agency. So I suppose I would be qualified to work for United Airlines.

**LG:** Gorillaz has been around for almost twenty years. Do you ever revisit the old songs? Can you find joy in them?

**N:** No way. That’s not my motto, by the way. I’m saying no. Life is way too messy to have a single phrase to get you through. You have to constantly adapt. Never stay still. Which, um, sounds suspiciously like a motto. Dammit.