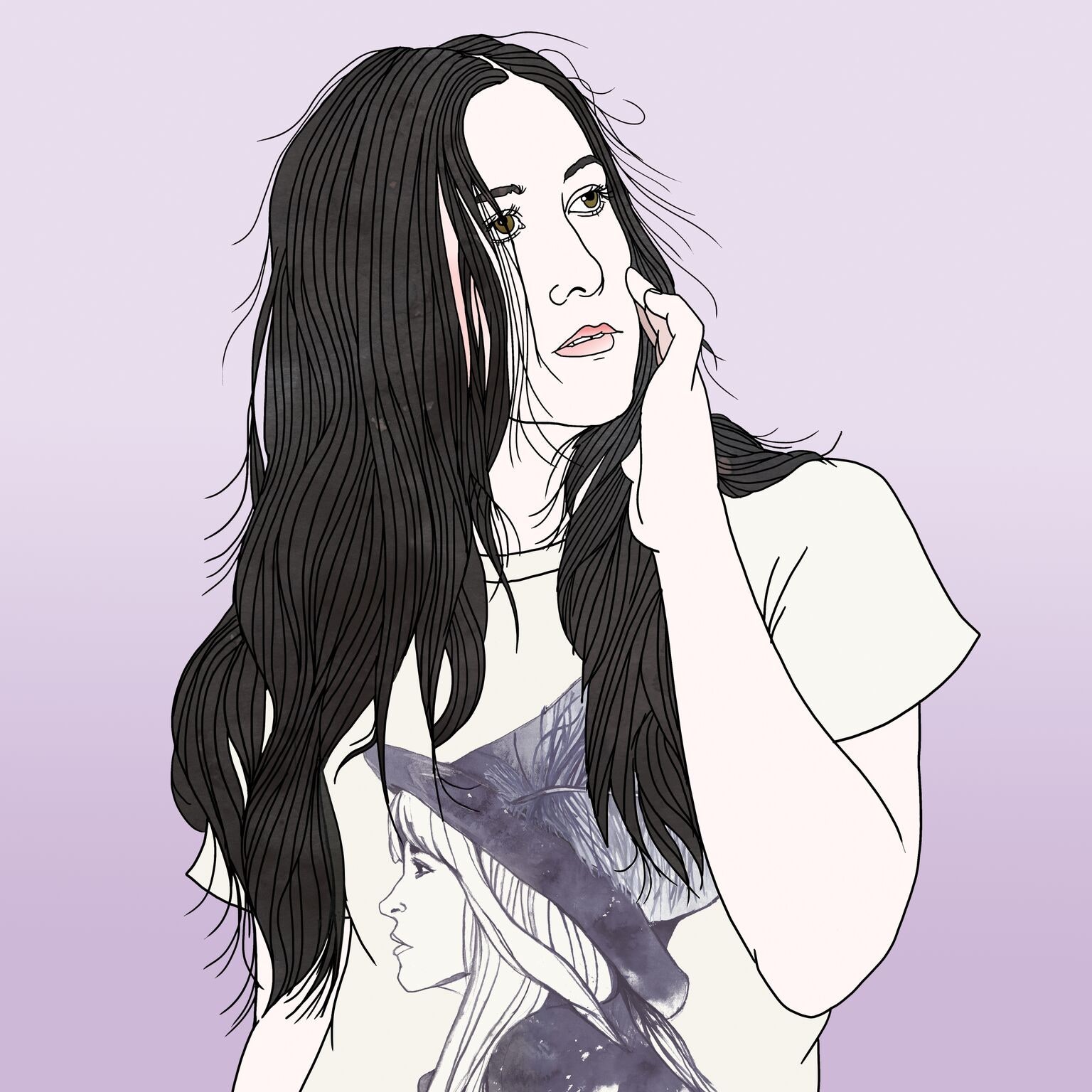 You probably remember Vanessa Carlton, girlish and doe-eyed, playing a piano atop a moving truck on a dirt highway, that spellbinding riff from “A Thousand Miles” playing over and over in your head long after the song had ended. That was 2001.

Now, sixteen years later, with five records under her belt, after struggles with drugs and alcohol, Vanessa has long left that polished pop-princess look behind. A recent album, 2015’s _Liberman,_ is a bold and refreshingly raw ethereal concept LP. It focuses on cautionary tales of love and loss, and includes poetic paeans to the themes of self-healing and renewal. Since then, she’s released two live albums, _Liberman Live_ and _Earlier Things Live,_ which cement Vanessa’s range as a formidable performer.

Recently, I got to catch up with Vanessa in between stops of her current tour. Vanessa and I went to the same Montessori school in the Catskills, and while we’re a decade apart, there are remnants of a shared childhood experience. Her mother, a classically trained pianist, was my piano teacher, and Vanessa is still a friend of my sister’s. We talked about Stevie Nicks, her response to the Cam’ron track “10,000 Miles,” and why it wasn’t the best idea to hire her then-boyfriend to produce her second album.

**Jillian Scheinfeld:** Your mother was a piano teacher. What role did she play in the carving of yourself as a musician? What was it like to grow up with such a strong-minded woman in your life?

**Vanessa Carlton:** I think it’s really a touchy your mother teaching you a craft. I think she was a great piano teacher because she never cared about the little things. It was always about the overall performance of the piece. You play, you make a mistake, you keep going. I would improvise on some Mozart sonatas, or a Greek piece, taking it to another place entirely, and she would never correct me. That was super-important to me, supporting my desire to explore different sounds that weren’t on the page. So, in that way, I think she had a profound impact on my creative life.

But outside of that, she’s incredibly intense and very stubborn. We’ve had major growing pains — as mothers and daughters have — and we’ve arrived at a really good place. Once I had my baby, I was able to channel a lot of empathy for my mother and start to imagine what she was like when she was in her twenties and got married to my father, who was a pilot, and they didn’t have much money. She set up this amazing life for herself and her kids as a working mother. She’s very progressive. I agree with a lot of now that I’m a mother. But it took me some time to get here.

**JS:** Considering the overall instability of today’s world,what’s most important for you to teach Sid, your two-year-old ?

**VC:** The most important thing now and what is breaking my heart daily is the lack of empathy that emanates from the administration. I think the most important thing is awareness of how other people live and the awareness that we don’t live in a bubble. All human beings crave the same things and need the same things, and we all do better when we connect. I hope for her to be a really ethical woman and know where she stands in this world. I hope she has that inner confidence that will lead her to feel like she can really explore and push herself. As my mother says, in her thick Jewish-mom-from-Queens-accent, “Vanessa, you’re here to make the world a better place.” And that’s the whole point, really. Because that’s what makes us all feel better. When you give, you feel better. And that’s just the way it is.

**JS:** _Earlier Things Live_ is a really inventive take on your old songs. What made you want to do this reinterpretation? Do they take on new relevance for you today? “White Houses” is my favorite song from your earlier days. It reminds me of being an adolescent and experiencing lust and rejection and beauty.

**VC:** “White Houses” has so many motifs that capture these really bold moments that everyone goes through, especially when you live away from home for the first time. I think that song is a really nostalgic one for a lot of people. I’ve made peace with earlier experiences in my career that were at the time really challenging for me, and I think it’s nice to be able to play those songs for people and include them in the set in a way that makes sense for me now.

We released _Earlier Things Live_ for the people who don’t know what I’ve been up to. The way I perform now — down to the singing and arrangements — is actually quite different. It’s amazing what you can do when you extricate yourself from a corporate machine. It’s scary as hell, but then I had the freedom to grow and explore and do things I always felt I could. I have no regrets about my music, so it’s nice to put it out there again in a new way.

**JS:** It feels like your old label had a real expectation for you to be this shiny, happy piano pop star, whether you wanted to or not. How much pressure was there to create music on their terms, and how much input did you have?

**VC:** , I was along for the ride and had very little experience in the studio. I wasn’t one of those artists who knew exactly how I should sound when recording. That’s so important to me now, I knew nothing then, and no one really showed me.

Toward the end of (1), the environment in the studio was such that I could give no input or engage in any dialogue about how to make it sound. It was all about then–A&M president Ron Fair’s sound. Over the course of performing and selling that record, I realized I wanted to explore how to make my sound more a reflection of the things I was into, but then I fell into the classic cliché of hiring my then-boyfriend to be the producer. He was more of a songwriter to begin with and was more interested in his own sound, so again, I was under the umbrella of someone else’s aesthetic. I’m not blaming anybody but myself for any of these things, but clearly I did not make for a very good pop star. I’m not some perfect piano pop-song girl. It’s so one-dimensional, and it drove me crazy. It took me a couple records to get out of that machine, and I eventually did.

**JS:** Your 2015 album, _Liberman,_ takes that sense of independence a step further, like this great, big love letter to the cycles of change. Of growth and decay. There’s some mysticism to it and a larger feeling of ethereal grandeur. How did these themes present themselves to you?

**VC:** _Liberman_ is so much about me healing. I had terrible polycystic ovary syndrome, and I was told by a doctor I couldn’t have children. For the year after I left my major label, I just destroyed my body with drugs and alcohol and broke down my system from the inside out. Then I met this amazing Chinese doctor and got into Chinese medicine. I would boil this rank tea every single day and drink it religiously, and it literally brought me back to life.

The cycle of the destruction and the healing, and all of the philosophies that I was reading, really influenced me. I was particularly into Joseph Campbell and Rebecca Solnit. A book that I reference a lot and highly recommend is _A Field Guide to Getting Lost_ by Rebecca Solnit. It’s a life-altering book. Before you read the book and after you read the book, you’ll have two different ways of looking at life, for sure. And as far as _Liberman,_ I wanted to create that “dream séance” album for people, that headphones-only album you put on when you’re out walking.

**JS:** Do you find you’re still able to maintain some sort of healthy balance when you’re on tour?

**VC:** Well, I’m very lucky to have someone like Stevie Nicks in my life, who has been a touring artist forever. She is a mentor to me, as well as a friend, so I get to bounce a lot of things off of her. And look, there were years there when I didn’t tour for a while. I just started touring again, right before _Liberman_ came out. I have an amazing manager now, and everything has finally become a really smooth machine. As you get older, you realize the art of performance isn’t really about you anymore. Once you’ve done the work and conceived the show, it’s just about being free onstage and connecting. It’s about the exchange between the audience and artist. I used to be so miserable on the road, tortured from living in my ego. At some point I woke up and thought, _Well, if I’m away from my baby and my husband, I better make this worth it._ So I think that really keeps me in line. I’m a total granny now, too. I know my limits, and I know what I need to feel good on the road, but that takes a lot of experience.

I met Stevie in a studio in LA in 2004, and soon after that her manager called my manager and asked if I wanted to open her North American tour, and then I also did Australia and New Zealand. That whole experience, watching her and learning from a master, had a huge impact on me. I’ve done a couple one-off shows with her since, and beyond that, we’re like sisters now more than anything else. The thing with Stevie is that she’s so down to earth and warm. She has this amazing allure and presence, and I think what’s most wonderful about people is when they know how to connect with you. And that’s Stevie’s greatest gift. Beyond all the shawls and beauty and mystery with her, it’s incredible just how willing she is to put herself out there. That’s what makes an artist’s work last longer.

**JS:** Lastly, I love Cam’ron and need to know if you’ve seen the video snippet of his new track ” (2)” that he sampled from you?

**VC:** Ha ha, actually, your sister sent it to me, so I heard it. That’s one I actually liked. People think “A Thousand Miles” is a song that can be easily sampled by sticking that little piano part in it, but it actually doesn’t flow that well when it’s chopped up. I’ve heard a lot of people attempt it, and it just ends up sounding strange to me. Or maybe it’s the key or the pattern. But in his case, I think it actually worked. Which is a real feat.

_Jillian Scheinfeld is a writer and entertainment editor living in Los Angeles. You can follow her on_ (3)_._