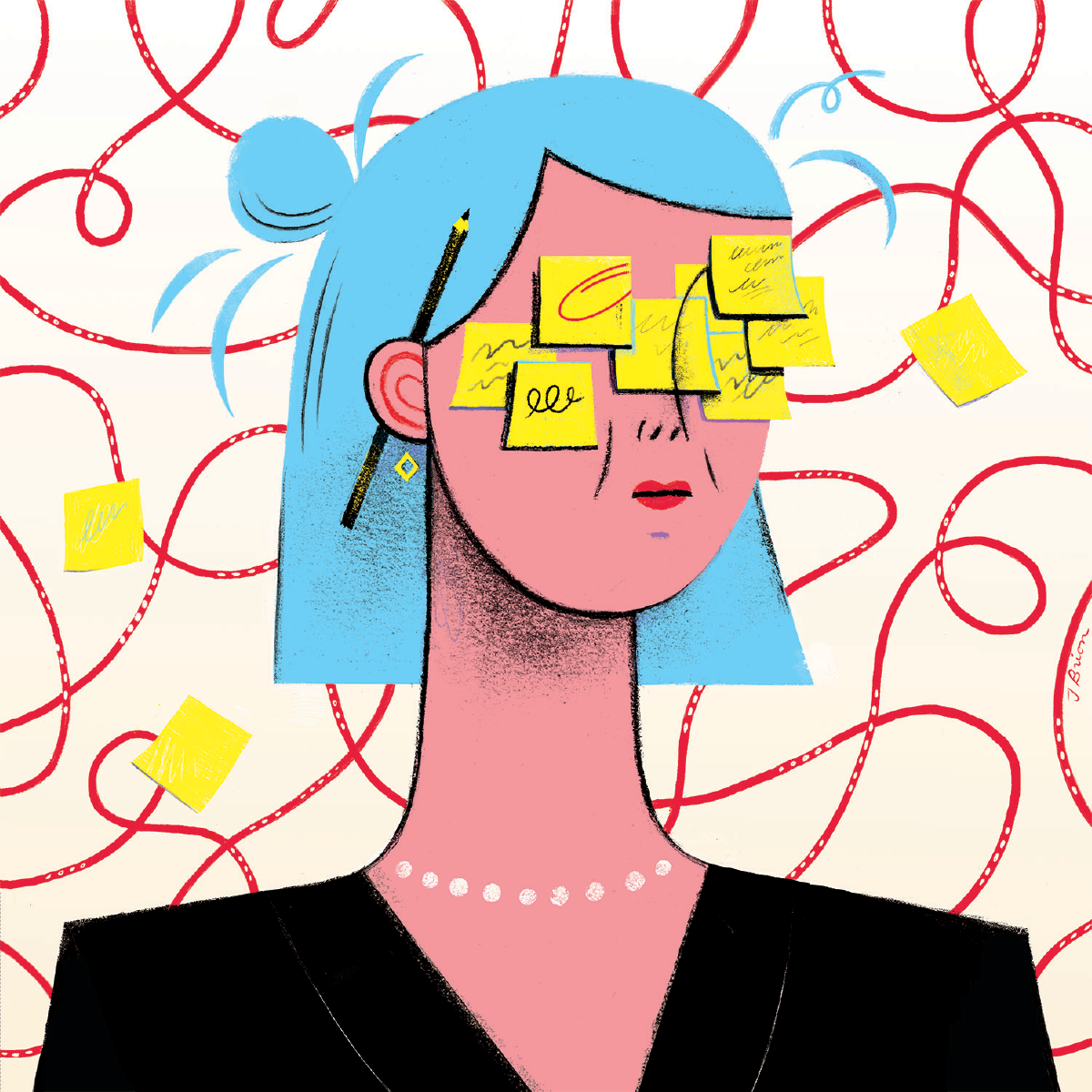 It’s September of 2004. I’m preparing a script for submission to a fancy actor and one of the freshly printed pages slices my thumb. A paper cut that won’t stop bleeding. I’m panicked, not from pain or worry, but because I’m not sure I have time to get another, non-bloody, script printed before the FedEx deadline. I call the mailroom and beg them to put a rush on the print order. I cover my thumb in Band-Aids. I keep working.

I’ve just been promoted from my very first Grown Up job to my second Grown Up job, going from talent agent’s assistant to agency partner’s assistant. Creative Artists Agency is a top firm representing players in Hollywood and beyond, so I don’t mind that my tasks are secretarial: I may be at the bottom of the ladder, but I’m learning from the best. I am exhausted, more exhausted than whatever I think baseline exhaustion is, but believe without a doubt it’s because I am working all the time.

The minute I learned someone would pay me not only to read and watch material but to help shape it into its final form, it’s all I wanted to do. A college film major, I interned at production companies over summers, and when I graduated I went straight to CAA: per multiple mentors, it was the best place to learn fast. My résumé got me the interview, and the blind confidence of the newly graduated cinched the job; I promised to work around the clock if that’s what it took. And it is indeed what it takes: I’ve always worked hard, but now I work harder. I’m increasingly tired. I bruise easily. I’ve always bruised easily, but these are different. Bigger. Occasionally I wake up with nosebleeds. I got them as a kid, so while it’s odd that they’ve returned, it’s not so odd that I need to be concerned. What I am concerned about is excelling at my assistant duties while also proving my creative acumen by reporting on material my boss doesn’t have time to read. This is how I’ll get a coveted executive job.

But it gets harder to ignore these things when other people start noticing. At a party, a med student does a double take at my bruised legs. I admit it isn’t my best look. “You should go to the doctor,” she says. I scoff. There’s no way I can take time off. It’s not that my boss wouldn’t let me, it’s that I’m 23 and a future Master of the Universe — even asking for an hour away is a chink in my assistant armor. My dedication to this job is a badge of honor.

Finally, if only to get everyone off my back, I make an appointment with a doctor my first boss recommends. The doctor, whose office walls are covered with accolades, has kind eyes and a long white beard. He tells me there’s nothing to worry about, I’m probably anemic, and takes some blood. I speed back to the office. What a waste of time.

> Finally, if only to get everyone off my back, I make an appointment with a doctor my first boss recommends.​

The next day, the doctor calls my work line. He believes the lab that tested my blood made an error, and he needs me to get a second opinion immediately.

He replies that if the results aren’t a mistake, I need an immediate blood transfusion, so I should probably take this seriously.

A tear escapes from my eye, a traitor to the “no crying in baseball” attitude I strive to maintain at work. The boss asks what’s wrong. I explain.

“Darren will drive you.” He points at my fellow assistant, my partner in long hours and dreams of promotion, who’s thinking the same thing I am: *Who will answer your phone?* I ask the question, hating that my voice shakes as I do. He shrugs. “Honey, I’ll be fine.”

Eleven years later, I tell this story with equal parts horror and humor. Horror that my “make it in Hollywood” blinders were so firmly on that I couldn’t see how much my health had failed or understand that it was unlikely I’d be fired for going to the doctor, and humor because the worst didn’t happen. My eventual diagnosis was far from the end of my professional dreams, so perhaps making fun of my failings will dissuade others from the same mistakes.

> Eleven years later, I tell this story with equal parts horror and humor. ​

After more blood work, the second-opinion doctor asks if Darren can drive me directly to Cedars Sinai, the nearest hospital, where I will be checked in for the emergency blood transfusion. The initial results weren’t a mistake.

We get in Darren’s car and I burst into tears. “It’s going to be OK,” says Darren. “That’s not it,” I say. There’s no way I can sit in the hospital without any work to do. I convince Darren to drive by my place so I can pack a bag of scripts.

At Cedars, I send Darren back to the office, both of us praying our boss’s day hasn’t been decimated by this debacle. I wait to get admitted, emailing the assistant I’d planned networking drinks with that night (“Not feeling great, let’s resked!”). I’m sure I will be out in no time.

“If you’d waited one more day, you would be dead.” I understand the basic math. I realize I should probably call my parents, and I do, downplaying everything. “I’m fine, they’re making a big deal over nothing, you certainly don’t need to come out here.” This is partially because I can’t stand anyone feeling sorry for me and partially because I still haven’t absorbed what’s happening. It’s easier to handle without concerned loved ones hovering around.

Around midnight, someone comes in with the blood transfusion and a ton of paperwork saying this blood was screened 900 times to ensure it doesn’t have any diseases. Fine print follows: no guarantees, sign this so you can’t sue us. I sign because what else are you going to do, and realize this is the first major decision I have made without getting someone else’s opinion. I feel proud but lonely. Am I an adult now?

I wake up with someone else’s blood inside my body. A doctor explains, regarding my own blood, that it looks like I could have leukemia. They need to do a bone-marrow tap to see. She elaborates: they will drill into the bone at the base of my spine to take a sample. They can numb the external area, but there isn’t a way to numb the bone. I read between the lines. This is really going to hurt. Fleetingly, I wish someone were here with me, then change my mind: better that no one else sees me this vulnerable.

The bone-marrow tap is, as advertised, the worst pain I have ever felt. A med student on rotation is drilling into my bone with an actual drill. The supervising doctor is trying to distract me by talking about the time she drove by Brad Pitt’s house: “You work in entertainment, have you ever met him?” *What?* I am trying to be chill, but it is so, so hard.

The med student finishes. And then he doesn’t, because he didn’t get enough marrow. Great work, Doogie Howser. Supervising Brad Pitt fan jumps in. It does not hurt any less.

They decide it’s probably not cancer and release me after a week with no clear diagnosis beyond “blood disease.” Frustrated that I still don’t have the OK to return to the office, I’m on the way to a specialist when I hear from the first doctor I saw. He’s positive he’s diagnosed me. The hospital was looking at only my blood, not my entire body, and so they missed what was right in front of them: lupus.

He explains the broad strokes — your immune system is unable to distinguish between healthy tissue and foreign invaders, so it goes overboard fighting both. I am shocked to discover that type-A me has a type-A disease. It is kind of poetic justice that my body overthinks things the same way my brain does.

He theorizes that the extreme sun exposure I endured during the marathon I ran that year combined with the stress my workaholic tendencies put on my system brought on the massive flare that caused my blood to cannibalize itself. “It sounds better than cancer, right?” I respond. He laughs. I laugh. I hang up and cry out of exhaustion and relief.

> I hang up and cry out of exhaustion and relief.​

I can’t believe this was over a decade ago. At the same time, I can’t really remember what my life was like before lupus. I’ve spent the past ten years faithfully seeing my doctors and taking the medication that keeps my disease mostly in check. These days my main symptom is massive fatigue, but I feel awkward even typing that — isn’t everyone tired? I have joint pain, which is helped by exercise, and I try to avoid getting sick, as infections are a typical flare trigger (as are stress and sunlight).

As for my career, I’m now a television executive, overseeing four shows currently on the air and loving every moment. Being up front about my health with my boss means that I’m able to arrange my medical appointments around my work schedule. Managing lupus, it turns out, is like managing a production: diligent attention paid on a regular basis means that problems are fixed in the moment. That said, I have had some flare-ups where my immune system gets overexcited and attacks healthy cells with extra gusto. While these certainly aren’t fun, they are manageable: I have a strong team of doctors looking out for me, and, more important, I’m finally looking out for myself. Monitoring my health rather than ignoring it means things are much less likely to spiral out of control the way they did in 2004.

For a long time, I was reticent to discuss my lupus. I didn’t want it to define me, and I didn’t want to seem like I think I have it worse than anyone else. I don’t. If managing this disease is the worst thing I have on my plate, I’m still a fortunate person. But in staying silent about this, I realized I was hiding a piece of myself. And in ignoring my symptoms 11 years ago, I was also ignoring a piece of who I was, unable to see beyond my career ambitions. I was too afraid of what I imagined the short-term ramifications would be at work to realize that if I didn’t focus on my health, there wouldn’t be a long term, period.

What’s worse, my single-minded focus on success caused me to ignore my condition, just as it caused me to ignore my loved ones who wanted to help. It took getting sick — nearly dying — for me to realize it was OK to admit weakness. Perhaps that’s a lesson we all learn in our own way: it’s OK for people to know you aren’t indestructible. None of us are. And maybe that’s what opens us up to have our deepest and truest relationships — not only with our friends and families, but with ourselves.

*Amanda Palley is a television executive in Los Angeles.*