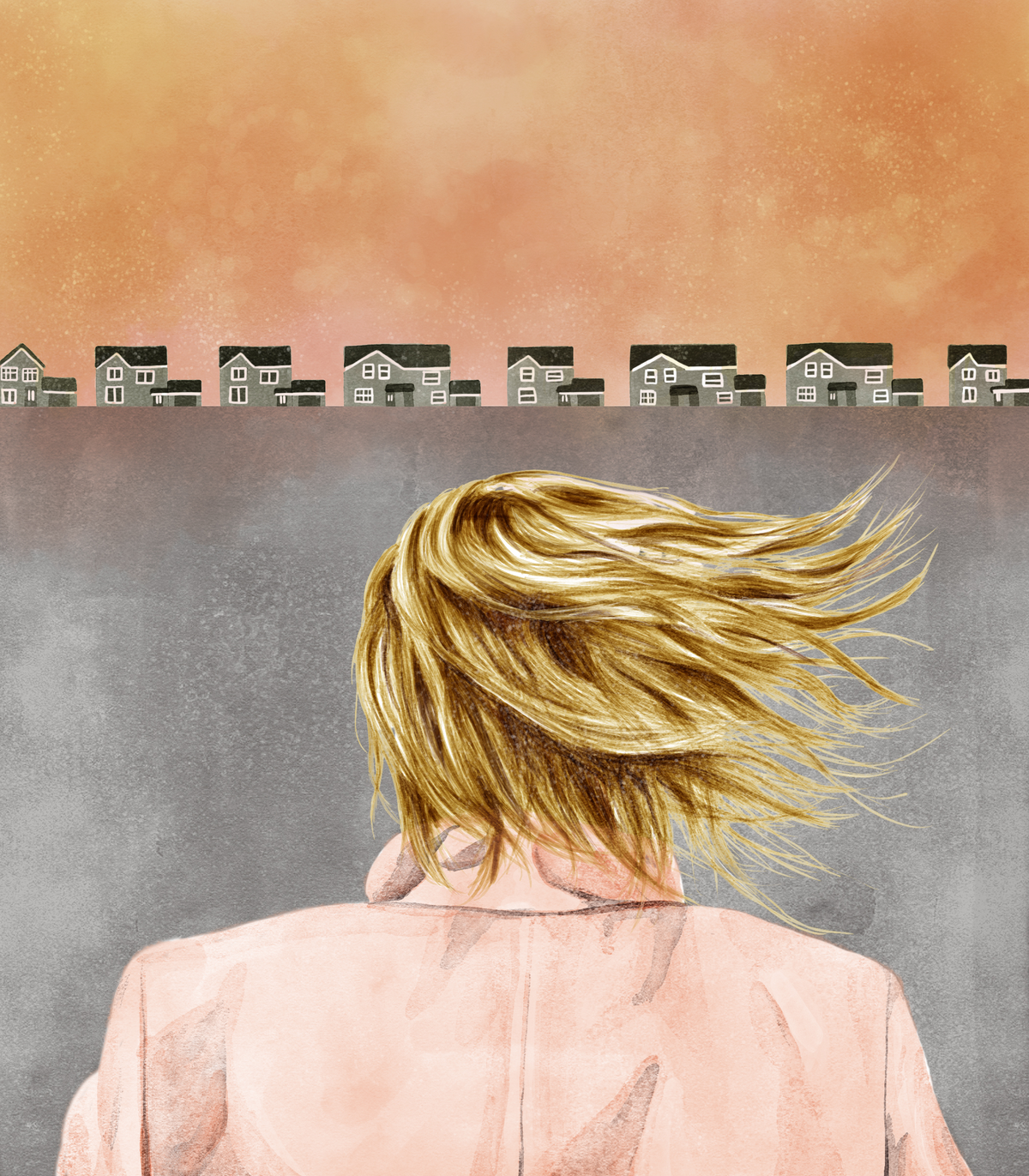 Andrea Dunbar’s 1977 *The Arbor* begins with this sparse but telling stage direction: “The GIRL was with her boyfriend. They were at his friend’s. She had known the BOY for ages but had only been going out with him for three months.”

Andrea doesn’t set the scene, or offer the usual specifics about costumes and sets. She doesn’t even give these characters names. It’s all about context, which is fitting considering who Andrea Dunbar was: a playwright of context, telling the story of her life as an impoverished young girl growing up in public housing in the north of England.

The titular arbor of Andrea’s play refers to Brafferton Arbor, a street on the Buttershaw council estates in West Bradford, Yorkshire. The Buttershaw estates were squat, dismal buildings erected between the 1940s and the 1960s. They were supposed to be a Utopian solution to the country’s public-housing crisis but instead segregated England’s poorest citizens into undesirable areas where urban blight, addiction, and violence could be easily ignored by their neighbors.

This is where Andrea Dunbar was born in 1961, and at age 15, after the stillbirth of her first child, she wrote *The Arbor* as a class assignment. The play is starkly realistic. It tells the story of a pregnant teenager and her abusive alcoholic father. What keeps it from being simple catharsis for a teenager in crisis is Andrea’s brutal but winking sense of humor, as well as her knack for dramatic structure.

An impressed teacher encouraged Andrea to submit her play to a drama contest, where it caught the attention of Max Stafford-Clark, then the artistic director of the Royal Court Theatre, and *The Arbor* premiered there three years later, in 1980. By that time Andrea had given birth to a daughter, Lorraine, whose father was Pakistani, which exposed both mother and child to the bald racism of the estates.

Despite her burgeoning life in the theater, which included significant media attention (1) as “a genius straight from the slums with black teeth and a brilliant smile”), Andrea chose to remain living in the Buttershaw estates, where she spent time in a battered women’s shelter before having two more children by two different men.

Instead of improving her quotidian life, Andrea’s minor celebrity seemed to enrage those around her, who felt her writing brought negative attention to the already demonized people of West Bradford. But Andrea would not move. How she managed to write during this time was a mystery to even her closest collaborator, Stafford-Clark, who received regular letters from Andrea bemoaning her lack of child care.

Still, she wrote two more plays: *Rita, Sue and Bob Too* was the story of two teenage girls both having an affair with the same married man. More resolutely a comedy than *The Arbor*, the play was turned into a film by director Alan Clarke (in true tortured-artist form, Andrea was said to have hated it). Andrea’s final play was a more mature character study called *Shirley*.

In 1990, at the age of 29, Andrea — a heavy drinker since her teens — had a brain hemorrhage in her local pub and died. She left a small inheritance to her three children, who remained at Buttershaw.

I first became familiar with Andrea Dunbar’s work through Clio Barnard’s remarkable 2010 film *The Arbor*. Far from a straight adaptation of Andrea’s first play, *The Arbor* is an experimental documentary that employs actors to lip-synch along to interviews with Andrea’s friends, family, and colleagues. The film also includes pieces of Andrea’s first play, staged on the streets of the Buttershaw estates, as well as the only existing footage of a 19-year-old Andrea, who has the bearing of a middle-aged postal worker and the face of a nine-year-old. What emerges is not just a portrait of Andrea — brilliant, stubborn, deeply flawed — but also of the estates themselves, a place that seemed to doom its residents to a life of small, everyday tragedies.

Actor and comedian Tracey Ullman, who was in the first production of *Rita, Sue and Bob Too*, offered me some insight into what stepping into the world of London theater must have felt like for Andrea. “She wasn’t around much and was very shy. She came to a few rehearsals and was not a theater person at all,” Tracey says. “The Royal Court was the only place that would have done something like that; that’s why I worked there. It was not a class-ridden, ‘Prithee, my Lord,’ (2)-trained-actors-running-around-in-codpieces sort of place.”

Still, Tracey adds, the bohemian environment would have mystified Andrea: “During rehearsals, someone had a small child who crapped on the floor one day when we were eating lunch. I was horrified, but before I could let out a cry, the woman put her hand over my mouth and said, ‘Stop! It’s free expression, don’t say anything, you’ll damage him for years to come!’ Then she said to the child, ‘Well done, Jack, you wanted to do a poo and you did a poo.’ Can’t imagine that Andrea’s kid would have got the same reaction.”

Tracey’s story (besides being a delightful example of liberal temperaments run amok) is a reminder of how trapped Andrea must have felt between the council estates and the London theater world. The people who understood her art didn’t understand her life, forcing her to perform her identity as an impoverished and unlikely genius. The people who understood her experiences, her Bradford community, would not, or could not, acknowledge her as an artist.

> The people who understood her art didn’t understand her life, forcing her to perform her identity as an impoverished and unlikely genius. ​

In 2000, Max Stafford-Clark commissioned *A State Affair*, a documentary play composed of interviews with residents of the Buttershaw estates. The interviews were conducted and curated by Robin Soans, a playwright specializing in what he calls “verbatim plays” like this one. Stafford-Clark’s goal was to continue what Andrea started, chronicling and illuminating the lives of England’s “underclass.” *A State Affair* did little to create the impression that life on the arbor had improved.

One of the residents interviewed was Andrea’s now-grown daughter Lorraine Dunbar (who participated much to her siblings’ chagrin; the rest of the family had circled the wagons around Andrea’s legacy). Lorraine’s monologue closes the play: “If my mum wrote the play now, Rita and Sue would be smackheads … on crack as well … and working the red-light district, sleeping with everybody and anybody for money. Bob would probably be injecting heroin … taking loads of tablets as well.”

Lorraine goes on to describe the racism she was subjected to as a child, and the lack of protection her mother offered. “One night, when she thought I was asleep, I heard her say she wished she’d had an abortion with me … That’s why I went on heroin … to block out those feelings.”

This is how *A State Affair* ends, with Lorraine’s assessment of what Buttershaw does to its inhabitants:

“If I wrote a play, I’d do it about the Buttershaw estates. It’d show some people getting their lives together with a lot of courage and determination. But it would also show others going down a big steep hill, in a big black hole.”

In 2007, Lorraine was convicted of manslaughter for allowing her toddler son to ingest a lethal amount of methadone. The English press had a field day, with headlines such as ” (3).” The Andrea they described was a chronicler of England’s saddest and least redeemable people, a sort of modern-day Dickens minus the Christmas ghosts.

What they forgot to mention was her humor, her hope, and the humanity she lent to every word. Andrea Dunbar refused to relegate her characters to any predictable fate, even as she fell all too perfectly into her own.