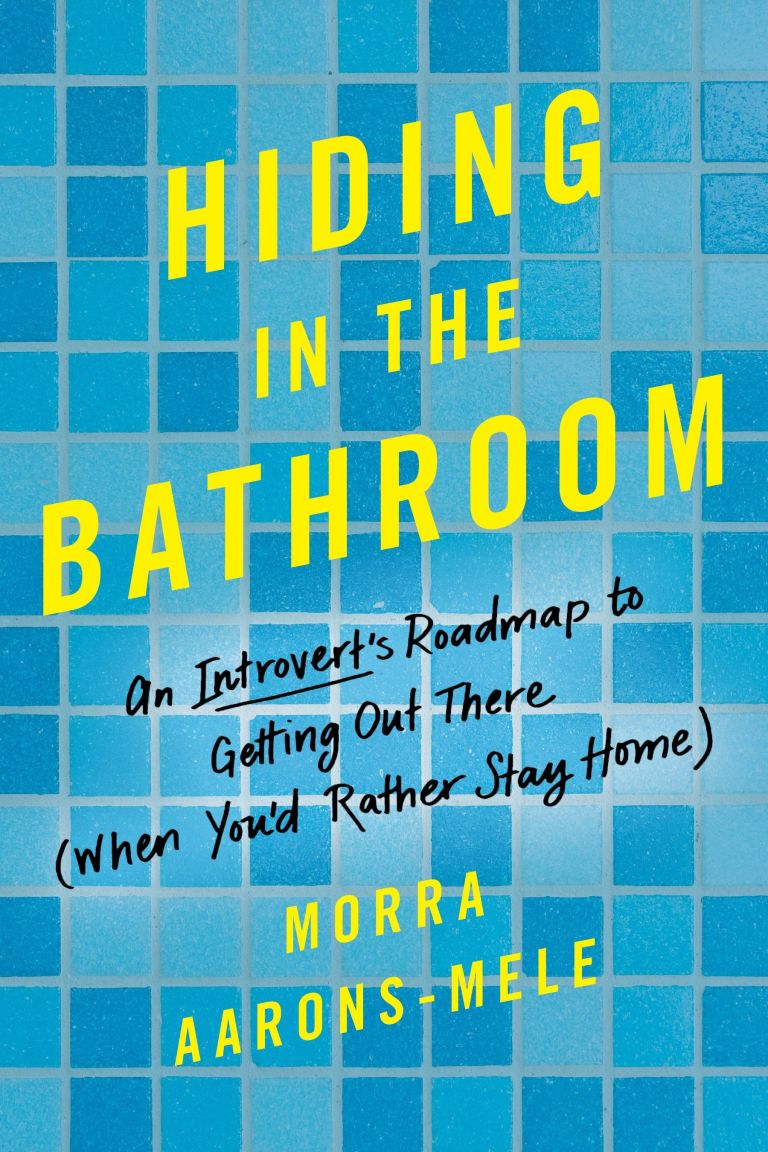 It was 2013, and I was about to give a speech at my alma mater, Brown University. I was nervous as hell (as was the Brown Alumni Relations staff!) because I planned to get raw. In front of a room of two hundred successful women, I was going to share the story of how I became happy at work only after I realized that the idea of who I wanted to be was making me anxious, destructive, and depressed. I was nervous but also elated as I approached the podium.

As I began to command the large hall I’d walked by many times as an anxious, and often sad, undergraduate, I felt free. “If you knew me at Brown, I don’t think you’d have expected I’d be keynoting the dinner,” I said.

“I have the dubious distinction,” I continued, diving in, “of being an ambitious risk-taker who also struggles with anxiety and depression. This has forced me to learn some very helpful coping mechanisms, and I want to share some today with you.”

But first, I told them, there were the panic attacks. That time sophomore year I couldn’t get out of bed for a week. Hiding in my dorm room, and then, when I graduated, in my apartments. How I sought geographical cures, moving to different cities, like London, and even farther-away continents, like Africa. How I did a fair amount of drugs — the worst of which, ironically, were by prescription. (Okay, I didn’t mention that in the speech.)

I talked about how, as a young woman, I wanted so badly to be liked, and to do everything right. I felt it was expected of me. I had been the kid who cried at sleepaway camp and wouldn’t let my mother and sister leave my first night at college. I only wanted home, and comfort. Instead I dealt with its absence like many young people do: through eating, drinking, and hookups.

I told them how, because I was very ambitious and driven, I went for every big job and opportunity I could — how I ran marketing for Europe’s largest online travel company when I was twenty-five. How I kept getting promoted, and I kept being miserable. The work was easy, but the office politics, the hours, the pace, networking, and rules of getting ahead rubbed up against my very temperament. I was living out someone else’s climb up the ladder, and I was fighting a losing battle. I had quit nine jobs, I wasn’t even thirty, and I cried in the bathroom almost every day.

Then, I talked about the day I realized that who I was and what I was doing every day were completely mismatched.

It was during my final corporate job, when, under the ubiquitous fluorescent lights, I realized I was allergic to them. They give me migraines. And as long as I had to show up and sit under those lights for ten-plus hours a day simply because I was expected to, I could never be happy.

“I see now,” I told the audience, “that I was caught in a cycle of achievement, of working hard for someone else’s dreams or expectations, and not my own.” It was only when I accepted that I needed a quieter life, needed to reframe success on my own terms, and figure out the tool kit I needed to get there, that I could find joy at work. Becoming “less successful” set me free.

Not exactly your typical go-get-’em women’s leadership speech. I had worked so hard on it, and it was the first real keynote I had delivered. (It’s still one of the few.) I looked around the room and was terrified. Would the undergrads and alumnae think I was a nutjob?

The speech got a standing ovation, and I felt like Oprah.

Many of the women in the room came up to me. Some were crying. Thank you, they said. We’re so anxious all the time, and no one tells us the truth.

I’ll never forget one young woman, a senior who was an economics major. She said to me: “I’m just so tired of trying to be this perfect person.” Like me, and many in the audience, she was on both antidepressants and anti-anxiety medication.

I felt her pain. Growing up, I was sent to the best private schools, and it never occurred to me to do anything less than achieve. Those of us fortunate enough to be raised with expectations of academic or financial success learn that when we achieve, we garner praise and positive attention — even if we’re faking our own enjoyment. Through childhood, adolescence, and into adulthood, we keep achieving, craving the external validation that comes when we get all A’s or are chosen to captain the team. I was, and am, extremely ambitious. But the more we achieve in order to win the approval of others, the further we get from our own goals — and happiness.

In the twenty-two years since I entered college, it has only gotten worse. The achievement pressure starts at birth, and snowballs from there.

> The more we achieve in order to win the approval of others, the
> further we get from our own goals — and happiness.

In fact, women seem to be increasingly less happy, even as they achieve more professionally. Ambitious and privileged young people on the path to college are raised with a narrative of achievement that no generation has experienced before. Do the most extracurriculars. Have the perfect internship. Get a great first job. Build your personal brand. Run that marathon. Eat organic. Get perfectly hairless and smooth. Fuck perfectly. Navigate dating. Enter your thirties, find a partner, conceive, and give birth (naturally, of course). Make your pregnant body the perfect temple for your perfect newborn, who will become a precociously perfect toddler. With the addition of social media, you’re supposed to share it all, too — as you suffer the FOMO of watching everyone else seemingly sail through life.

As a business owner and entrepreneur with serious mental health challenges facing this surround-sound kind of success, I’ve often found myself hiding out in the bathroom. But now that I’ve realized my anxiety is part of who I am, I embrace what it gives me: like, for instance, excellent people skills, empathy, and drive. I like to think my anxiety and I are business partners, frequently negotiating, sometimes arguing, but often creating great work.

Because, let’s face it: it can be hard to haul yourself up the traditional career-ladder scenario if you need more control over your space, pace, and place of work than others. People equate that kind of personality with laziness, or lack of ambition. Read any business profile: your average successful icon isn’t someone who rarely does lunch, and rules the world from her bed wearing yoga pants.

Also, your average manager won’t necessarily understand that you need a different kind of workday, but that has nothing to do with the level of effort you will put in, or the drive you possess. That a need for quiet, alone time is ingrained in who you are. They may not be able to see that, though you work differently, you work harder than someone who’s racking up hours at the office surfing  (1).

The good news is that you can learn and practice the skills you need to achieve a version of success that’s right for you, and make enough money.

The bad news is, unless you’re an organic foodie, slow growth isn’t sexy.  You will not garner accolades for growing your career or business slowly, or for enjoying your life. You won’t be featured in magazines, and you probably won’t regularly keynote conferences — if you do at all. Even worse, everyone in your life, from your accountant to your graphic designer to maybe even your spouse, will question your strategy. Get out there, they’ll say. Buck up. Frankly, they would be happier if you were in the office, surfing  (1) like everyone else.

But professional bathroom-hiders know the truth: when you’re an anxious introvert, dialing it down is the key to getting out there. And, when you’re committed to making what you do in that minute as important as the long-term, both your work and your life can be more fulfilling.

So how do you get out there while staying in?

The best strategies begin with setting a vision and developing realistic goals that satisfy all of your needs. To maximize your impact with the least amount of face-time, you carve out a strong professional niche and digital footprint for yourself. If you own a small business or work freelance, you price your offerings slightly above market rate. You determine the right client, project mix, or type of work that allows you the time you need for yourself. No matter where you work, you create a long-term, professional “franchise” for yourself that assures you of future jobs, freelance gigs, and business opportunities as well as even more free time in the future. You engage in high-impact, smart networking and only attend a few strategically selected conferences. You track your work flow and scope your work more carefully so as to protect your time for family, friends, and self. And finally, you recalibrate expectations with bosses, spouses, family members, and others.

But hiding in the bathroom is more than a targeted lifestyle strategy. It’s attending to the care and feeding of your whole being, attuning to your emotions as well as your ambition. In both your work and life, emotions are valuable information. You can make anxiety work for you instead of driving your work, and let your business be a vital part of your life without taking it over.

And you won’t be alone. Because, if there’s anything I’ve learned in my almost 20 years of business, it’s that you meet some of the best people hiding in the bathroom.

*Excerpted from* Hiding in the Bathroom: An Introvert’s Roadmap to Getting Out There (When You’d Rather Stay Home) *by Morra Aaron-Mele.  Courtesy of HarperCollins Publishers*