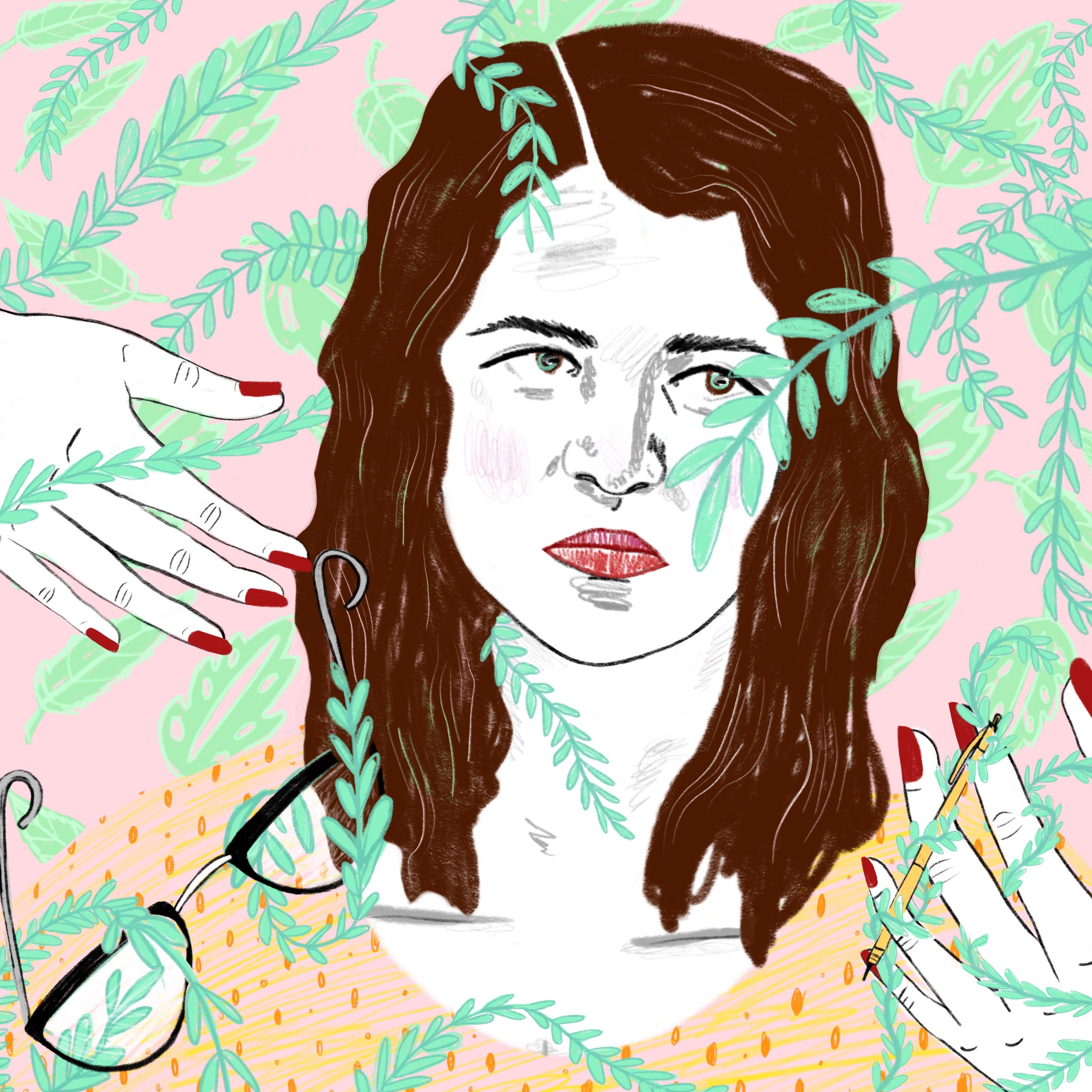 Before I was a writer, I told myself stories largely because I was lonely. It was right around the time I failed my first big test, for my elementary school’s gifted track. There’s a part of me that never quite moved beyond that chubby, fuzzy-haired kid, scratching at her eczema and peering warily through greasy lenses at the adults talking at her. I was an easy toss: messy, bad with numbers, spottily attentive. At the heat of appraisal, my brain would — unsolicited — begin doing the dreamy, yet active, work of taking me out of the way of threat and placing me elsewhere. I recall feeling myself already sliding during the verbal section, an adult voice delivering a firm, gentle “No.”

Later, when I began putting my brain’s work to paper, it remained a calling, a private, beloved thing. The antithesis of the tests I learned to take and the grades I learned to make in high school in an effort to redeem my sense of value, an ugly, scrabbling hustle for something that felt, troublingly, like love.

Achievement, then, always felt a bit fraudulent, though no fraud, of course, was involved. The efforts were, for better or worse, all mine.

Fast-forward twenty years, to when I applied for MFA programs with the short stories I wrote at night after my office job. I forced myself to expect nothing and got into a grad program in New York that I was surprised accepted me. It was, I was convinced, absolutely stupid luck. I was thrown into classes with people who’d gone to amazing schools — Ivy League, private, rarified.

I was absolutely numb with intimidation. “*They* belong here,” I thought. I did not.

It took seven years of work to finish my novel. I worked days at an office, awaiting the five o’clock punch-out for the time when I could finally write. I was at my desk when my dream agent called me. About a year after, she sold my book. I marveled: *more good luck*.

Two years later, the book was released. I could hold it in my hand and look at my author photo and see the back, where important people said a bunch of nice stuff about me, *in a row*. Lovely, surreal.

And it was perhaps here that I felt that first cool, confusing twinge of — something. All those good things said about my writing and, by extension, me. On the surface, the months to come looked thrilling: reviews, interviews. Authorship. A dream realized. It felt a little *too* good. It felt *troublingly* good. *It’s OK*, I thought, trying to shake the weird sense that I was doing something I wasn’t supposed to be doing. *It’s not a sin if I don’t actually believe any of the things they’re saying about me*.

I put my own book on my bookshelf, for the first time, and tried to forget about it.

I begin to have some repetitive thoughts. At first, I brush them off as markers of standard-issue anxiety, a consequence of the nonstop work, the lack of sleep. But the itch deepens with the passing weeks. The impression solidifies, eventually, into a cogent argument: *This whole thing is a goddamned fluke*.

I did not deserve to get a book published. This is all happening to the wrong person. At some point, the bottom will fall out. Maybe I bungled a detail about hemorrhagic strokes, or animation production, or any other manner of things I wrote about, and it will ruin everything. There will come that definitive review that uncovers my writing as vapid, trite — the review that will convince everyone of what I secretly suspect is true about myself. I will no longer be believable, marketable, and my agent, editor, publishing team — brilliant people I still cannot quite believe agreed to work with me — will discover that I am not, in fact, creative or competent. For their kindness, I will let them down.

This, I realize, is for people who’d been born into worlds in which getting books published happens regularly. For those gifted since grade school, who photographed and networked with ease, who didn’t sound like Cletus the Slack-Jawed Yokel when they talked. I imagine that gifted-track test and feel the sting of that delivered *no*, and I imagine that all those now-faceless adults knew something about what I lacked, what I *lack*, that I did not.

> It is an unsettling revelation of my own limitations — not of what I can do, but of who I am.

I cannot rationalize this feeling, but it is with me all the time. I could attribute it to growing up in the Bible Belt — even for those not raised evangelical, there permeates throughout that culture a religiously tinged fear of getting “too big for your britches,” an unspoken belief and perhaps secret satisfaction in a corresponding comeuppance to any good fortune. Particularly for women; there is a special glee reserved for women who stumble. I am secretly convinced a universal force will punish me, in one way or another, not only for aspiring to be something I am not but for feeling such paralyzing sadness at an event I know I am lucky to experience, one that might not happen again.

I sit down to write, and those voices crowd out the part of my brain that I treasure — that pipeline to the subconscious dream work that has sustained me all my life. It was, to date, one of the best feelings I had ever experienced, writing, one of those sensations that made me glad to be alive, a feeling that, when I attempt to describe it, always elicits in my mind the image of a clear tube with a ribbon of water moving through it. But those voices — I’d kept them at bay for a long time, but 2017 is their year.

I freeze. I am reading about myself. My every justification, my every fear of retribution or punishment, the leaden feelings of guilt. My knowledge of my own fraudulence. My terror of exposure. This is, I read, a common malady in women, whose implicit training in subservience makes success on the most basic level seem an aberration, a transgression against a core tenet of how a woman is supposed to live.

I am surprised that impostor syndrome is not cataloged in the DSM-5, so powerful is its sway over this time of my life. It is a force as formidable and uncontrollable as any other mental illness I’ve encountered, the self-loathing holding my brain hostage for days, weeks, months. A year. These values were coiled inside me, fostered when I was likely too young to do much about it, waiting for their day to surface and spark ruin. And now that these values have defined themselves, I wonder if they will ever subside.

The discovery is a relief, in that it peoples a time that feels deeply, personally isolating. Yet the syndrome’s description offers the unsettling feel of the chronic; it is hard to know where you stop and where the beast begins, it seems. It is not baggage sheddable via self-actualization. As in alcoholism, or clinical depression, you are the sickness’s home.

By late spring, I am desperate to feel something that is not this —the crying jags, the feelings of worthlessness, the inability to write. It is after my 33rd birthday, after my book is released, that I look in the mirror to find myself older, the seams around my eyes that used to go slack when I stopped smiling now permanently there. My stomach pulses with acid. A new constellation of acne appears around my jawline and forehead. I begin to lose hair on one, weirdly placed spot on the right side of my head from stress.

I get a therapist and a psychiatrist and a prescription for Wellbutrin. There’s an energy uptick, there’s weight loss. There are less pleasing side effects: a constipation that jives weirdly with the jitters. The *exceedingly* fucked-up Wellbutrin dreams, marked by a disquieting vividness in sensory detail — dreams in which you kill someone and can feel the oiliness of their blood on your hands, for instance.

It is an unsettling revelation of my own limitations — not of what I can do, but of who I am. I had not before known my true capacity for dealing harm to myself, a capacity that, frighteningly, I can see in others. A whole generation of women, falling on their own stakes.

Then, something I did not expect happens. I get art from people who have read my book. My main characters, a pair of animated cartoonists, Mel and Sharon. Envisioned.

It felt like I had been speaking in a foreign language for the better part of my life, a barrier of true understanding between myself and everyone I encountered. That private language was funneled into my book, into Sharon and Mel, and now they were finding people who spoke that same language, and this golden lifeline, the oxygen of kinship, was spinning warm and rich out into the world. These sketches are the most beautiful things I have ever seen. When they make me cry, it is the first time in months I am not crying from quiet terror at who I have become.

It was that need to be understood but also the hidden hope that I would come to understand others. It had something to do with the blunted desire with which we all live and slowly becoming accustomed to this deprivation until the deprivation becomes something else, slow-burning and forgiving. Someone’s voice coming out of the darkness; someone else’s, answering.

I can’t wrestle an affirmation out of this experience. Along with the realization that this has stolen from me a year of my life I will never get back, there is the knowledge that I will never be shed of this sense of my own fraudulence, this waxing and waning urge to experience hurt in order to pay, in some sense, for goodness. It’s a thread tying my life together, good striped with sour. There is, however, the hope that this is not all that waits for me. I savor the days when I am bigger than my own sense of shame. And the day I sit in front of my keyboard at long last and begin to write and it feels the way it should — water moving through a clear channel. It, too, feels like oxygen.